A brave mother has told of her terror after she was raped by a grenade-wielding maniac she met online – while five months pregnant with his child. Marina Adams, 44, decided to share her violent rape story to help others who have been through a similar situation.

Courageous Marina contacted SellUsYourStory.com to see if she could raise awareness from sharing her horrific and terrifying violent rape story.  Not only did we arrange exclusive newspaper coverage of Marina’s story, we ensured she was paid the highest fee possible, was handles with the utmost sensitivity, and the story was told her way.

Marina was subjected to a vicious 15-hour ordeal by illegal immigrant Alexander Volynets, 39.

The 14-stone brute struck after Marina, who was raising a four-year-old daughter alone, tried to cut ties with him, telling her: “If I can’t have you no one can.”

He raped her twice in her bedroom despite being heavily pregnant with his child – which she went on to have.

Window fitter Volynets was later jailed for six years and deported back to his native Ukraine to finish serving his sentence.

Hairdresser Marina, of Bognor Regis, West Sussex, who has waived her right to anonymity to speak out, is now petrified he will return and strike again.

The mum-of-two said: “I worry he will come back to Britain. At the back of my mind I think, if he has done it once he could do it again.

“If he was in this country again I would be absolutely terrified. I would have to move to a different country or somewhere he couldn’t find me.

“I would be absolutely petrified. I dread to think what would happen.

“I feared for my life. He said he was going to kill me and I thought he would. He is mentally unstable. He is dangerous and ruthless.”

She added: “The internet is an open window. You could meet the love of your life or you could meet someone like who I met.

“You don’t know who is behind the screen.”

Russian-born Marina, who has lived in the UK for half her life, met Volynets on dating site love.ru and fell pregnant with his child after a brief fling.

She decided to keep the baby but broke things off with Volynets after discovering he had two passports, was living in London illegally and had been lying about his age.

Grovelling and seemingly romantic at first, he begged Marina to take him back, telling her he loved her and asking her to marry him.

But things turned sinister when she said no and the father-of-two began to stalk her, bombarding her with late night calls, texts and up to 100 emails an hour.

On one occasion she found him lurking in her lounge at 1am, having removed the bolts from her back door so he could sneak in to check if she was with another man.

Over the next six months, Marina, of Bognor Regis, West Sussex, claims she visited police at least five times and they issued Volynets warnings, but he ignored them.

In a desperate bid to put him off, the heavily pregnant mother resorted to lying and told Volynets, who was living in London illegally, that she was in a new relationship.

But the plan backfired and two weeks later, on January 29 2010, the 14 stone thug turned up on Marina’s doorstep, barged inside and raped her twice.

Describing her violent rape story, Marina told how Volynets came home on a Friday night because he knew her eldest daughter would be at her mum’s house so she would be alone.

She said: “He knocked on the door. I had expected that he might come over and I thought we might deal with it once and for all.

“But instead of that, he just pushed himself in, threw my phone out of my hand and shoved me against the wall.

“Then he put this hand grenade right up to my face and said, ‘Are you happy now?’, said Marina, who had no idea the grenade was a realistic replica at the time.

“It went round and round in circles, he was going on and on and on and was holding the grenade the whole time. I just thought, ‘Please go away.’

“Then he told me to go upstairs. He raped me in my bedroom. He told me not to struggle. He said, ‘You won’t struggle because you will lose your baby.’

“He was very calm and was giving orders but he had these mad eyes. I tried to push him off but he is tall and strong – I had absolutely no chance.

“He didn’t leave until the next morning. He told me he was going to keep doing it. He said, ‘I will keep coming back and doing what I’m doing until you get used to it.'”

Volynets raped Marina at night and again the following morning, warning her not to struggle and threatening to blow up the house if she did.

He finally left at 8am, 15 hours after he arrived at 5pm, while Marina put on layers of thick jumpers and wrapped herself up in her quilt.

By coincidence, police knocked on her door later that week and said they had caught Volynets, who was married with twin daughters in Ukraine, with a crowbar trying to break into houses.

She broke down in tears and told them everything.

Volynets denied rape but was found guilty after Marina gave evidence during a week-long trial at Lewes Crown Court in May 2011 and jailed for six years.

He was jailed for six years deported to Ukraine in 2013 to serve the second half of his sentence and is since understood to have been released.

She said: “A two-month mistake ruined three years of my life. In the end he was in jail but I was serving the sentence.

“I was was frightened, paranoid and a nervous wreck.

“I eventually decided to forgive him and this has definitely made me a stronger person. He has no power over me anymore.”

But she added: “If he has gone this far then next time he will go further. Every woman who sees his photo should beware.”

Sussex Police said: “The rape was thoroughly investigated, resulting in his conviction, prison sentence, and deportation.”

If you have a story to sell to the press, please contact us today.  It doesn’t have to be a violent rape story, but whatever it is you can rest assured we will handle it sensitively and professionally.

If you would like to find out more about how to sell a story to the press, read our Sell My Story page. 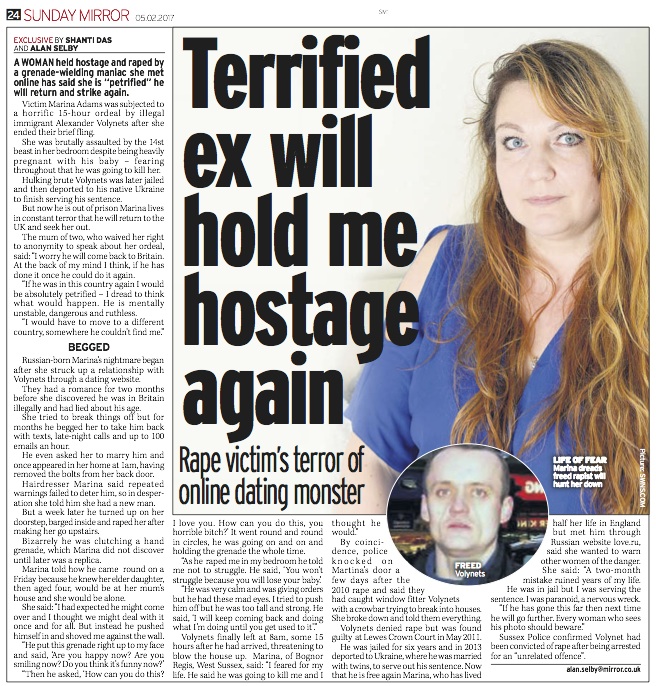