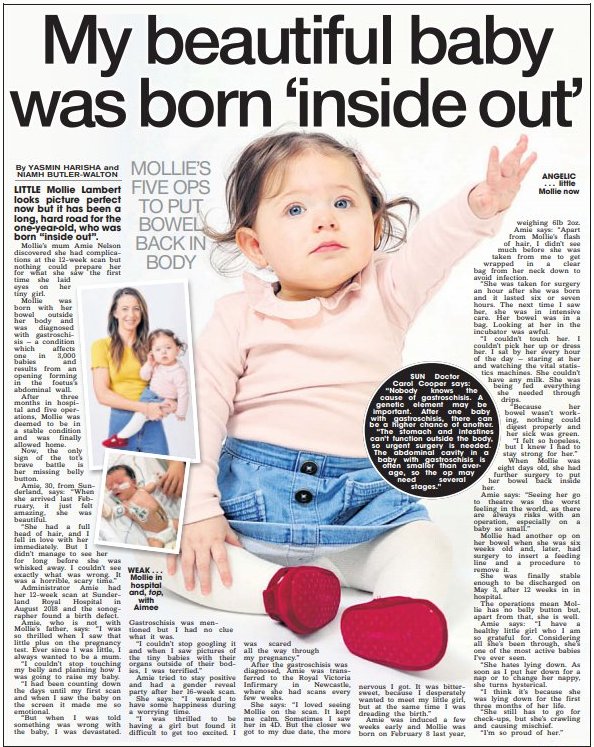 Do you have a story to tell? Why not share your story, help those in a similar situation, and get paid!

We’ll consider any story, so get in touch using the Story Valuation form on this page. Whether it’s heartbreaking, heartwarming, bizarre or just a bit of fun, we want to hear about it.

Once you submit your story, one of our team will get straight back to you if it’s suitable. We guarantee the highest payments. You stay in control. We never print anything you send us without your permission.

Amie Nelson had a story to tell. What’s your story?

Meet the ‘inside-out’ baby – born with her BOWEL on the outside of her body.

Little Mollie Lambert was diagnosed with gastroschisis – when she was born in February 2019 – after medics discovered her bowel had grown outside of her body after her abdominal wall hadn’t completely developed before birth.

The condition is caused by an opening forming in the fetus’ abdominal wall and only affects one in every 3,000 babies – making it as rare as being struck by lightning.

Not only did sharing Mollie’s story help those living through a similar situation. Amie also got paid for telling her daughter’s beautiful story.

After Amie contacted us via the story valuation form, one of our trained writers called her straight back. We interviewed Amie over the phone and arranged an exclusive deal with The Sun Newspaper‘s Fabulous Magazine, as well as follow up magazine deals.

Do you have a story to tell?

What are you waiting for! Everyone has a story to tell. What’s yours worth?

Get in touch today to find out…

We help members of the public publish thousands of stories every month. In fact, we’re part of the largest independent press agency in the World. Here’s just one example of an inspirational story we’ve worked on recently…

Mum-to-be Amie Nelson, 30, was warned that something serious may be wrong with her baby when the sonographer spotted a birth defect at the routine 12-week scan in August 2018.

But she had to wait until her daughter was born before she was given an official diagnosis.

Within an hour of arriving, Mollie was whisked into surgery to have an operation to work on getting her bowel back inside her body – and the tot went on to have a further four procedures before she was even six weeks old.

But Mollie has bounced back from her tough start in life and she is now a happy, healthy nine-month-old.

Amie, an administrator for NS&I, from Sunderland, County Durham, said: “It was a horrible, scary period of time.

“But it was worth it because now I have a happy and healthy little girl who I am so grateful for.”

Single mum Amie was ecstatic when she discovered she was pregnant with her first baby in June 2018.

But the 12-week scan revealed that there was something wrong with her unborn child and she was forced to wait until their daughter was born to find out what the problem was.

Amie said: “I was so thrilled when I saw that little plus on the pregnancy test.

I always wanted to be a mum

“Ever since I was little I always wanted to be a mum, so it was a dream come true. I couldn’t stop touching my belly and planning how I was going to raise my baby.

“I had been counting down the days until my first scan. I was dying to tell all my friends about the good news and was desperate for this scan to be over so I could share it with everyone.

“My mum, Linda, 58 already knew about the pregnancy, but wanted to know that everything was alright. But the nurse at Sunderland Hospital gave me some bad news.

“She said there was something wrong with the baby, but due to the tiny size of the fetus, they couldn’t say for sure what it was. Gastroschisis was mentioned but I had no clue what it was!

“I left my scan devastated. Neither my family or I knew how to react.

I left my scan devastated

“It was something that none of us had previous experience with, so we were all clueless. I couldn’t stop Googling it, and when I saw pictures of the tiny babies with their organs outside of their bodies, I was terrified.”

Amie had a gender reveal party just after her 16-week scan, where she found out she was having a little girl. I was thrilled, but found it difficult to get too excited,” she said.

The mum had to go for scans more often than usual – including a monthly trip to the Royal Victoria Infirmary (RVI) in Newcastle.

Amie’s due date was on February 27th, but due to the dangerous situation that the baby was in, Amie was induced at the RVI in Newcastle on February 8th.

Amie said: “We were all terrified. It was just the complete unknown. The closer we got to my due date, the more nervous I got.

“It was bittersweet, because I desperately wanted to meet my little girl, but at the same time I was dreading the birth. I was so nervous arriving at the hospital, I kind of went into a daze.”

Born with her bowels on the outside of her body

Amie said: “She was beautiful. She had a full head of hair, and I fell in love with her immediately.

“Despite her bowel being visible, I still fell in love with her and wanted to hold her. But she was whisked away from me and placed into a clear bag from her neck down in an attempt to avoid infection.

“The hardest thing was not being able to hold my little girl.”

Amie was unable to hold her little girl for two weeks whilst the tot recovered from the op.

She said: “It was awful, I had to stare at my baby and all I wanted was a cuddle, but I couldn’t pick her up and squeeze her. It was so hard to look at because you could see the organ poking out, but I also couldn’t take my eyes off her. She was beautiful.”

For three months, Amie watched as her little girl vomited up bright green liquids every day and had her stomach put in a bag on the outside of her body to protect it, and desperately waited for positive news.

Little Mollie was in hospital for 12 weeks whilst she underwent three operations on her bowel, during which doctors attempted to safely put it back inside her body.

Two more operations were performed on her to insert feeding tubes – meaning the tiny tot had five operations before she was even three months old.

Mollie’s condition finally became stable and she was able to be discharged on 3rd May after 65 days in hospital. Now at nine-months-old, she is at home with her mum.

The little girl has no belly button, but aside from that is doing brilliantly.

Amie said: “Considering everything she’s been through, she’s one of the most active babies I’ve ever seen. She never stops.

“I try to get her to watch TV sometimes when I need a rest, and she’s having none of it.

“She absolutely hates laying down. As soon as I put her down for a nap or to change her nappy, she kicks off and turns hysterical. I think it’s because she was laying down for the first three months of her life. She just wants to be up all the time.

“She still has to go for regular check ups at the hospital, but she’s crawling and causing mischief. I’m so proud of my little girl.”

Do you have a Story to Tell? Contact us today

Contact us using the story valuation form on this page. Everyone has a story to tell. What’s yours worth?

For more information about how to sell a story, see our Sell My Story page.