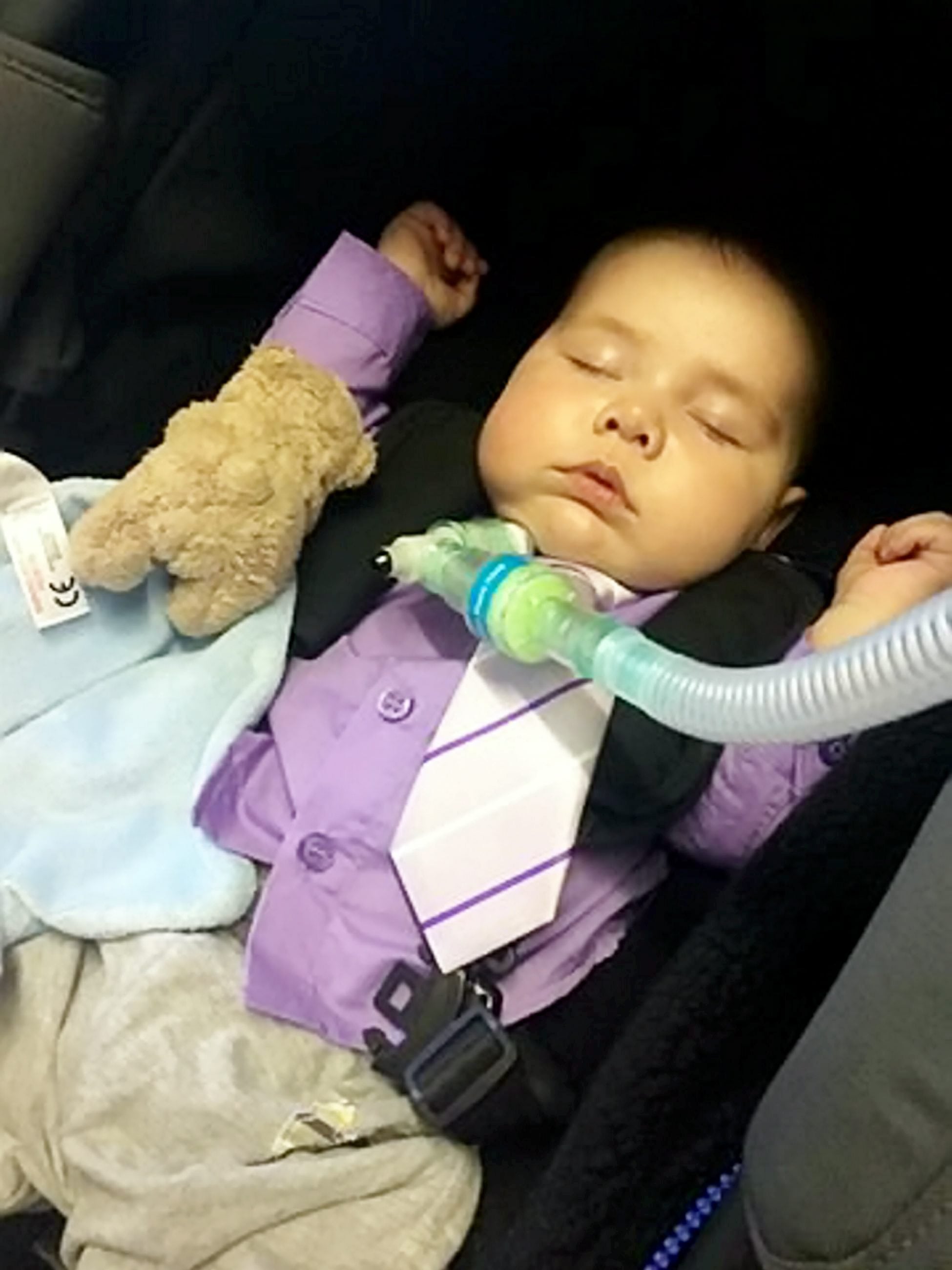 At their 22-weeks scan, Sam, 24, and Brian,28, were handed the devastating news that Wyatt would be gravely ill when he was born. Poorly baby Wyatt suffers from a congenital diaphragmatic hernia (CDH), a condition found in only one in 2,500 babies. 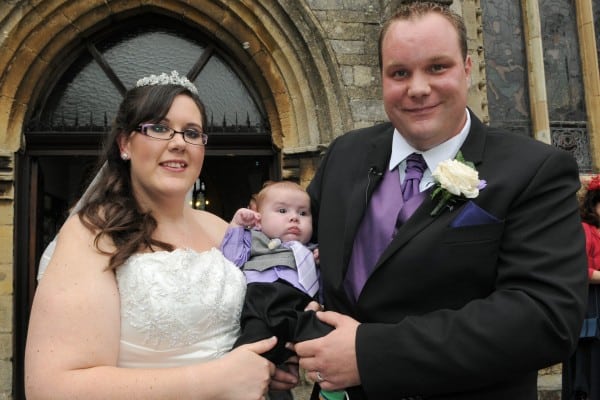 And just days after he was born the family were warned to expect the worst and were forced into a hastily arranged christening at the hospital. In the coming weeks Wyatt underwent a gruelling tracheostomy to allow him to breathe more easily. But the couple decided to remain positive and kept the wedding date they had booked two years earlier in the hope that their son could join them at the altar.

Hospital staff promised the couple that they would make sure the youngster was healthy enough to go to the ceremony. And on the big day, plucky tot Wyatt had made such a remarkable recovery, that he was able to leave hospital for the first time in his short life, to attend the wedding, where he smiled and giggled throughout the service. With the help of two nurses Wyatt – dressed in a dapper purple shirt and waistcoat – watched as Sam and Brian tied the knot. 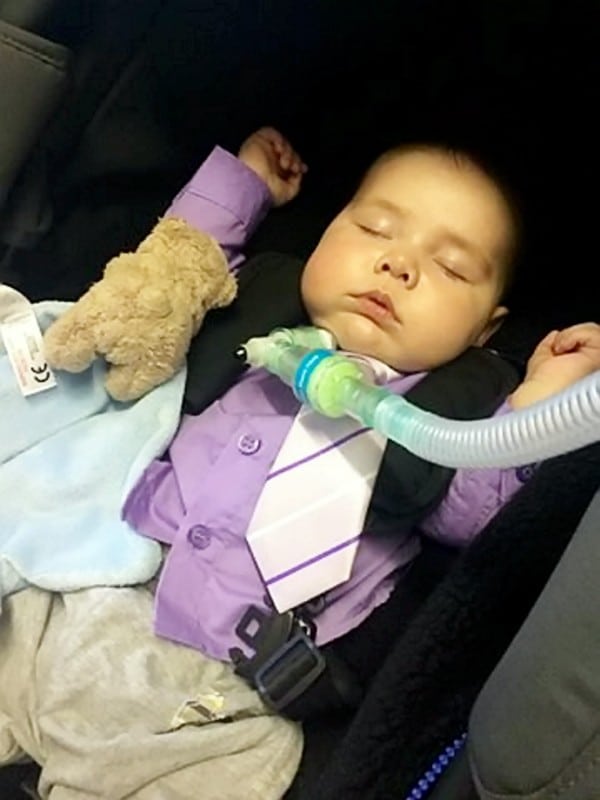 The brave youngster sat on his mum’s lap as she signed the register during the emotional 45 minute service in front of 145 guests. The pair had to fork out hundreds of pounds for two specially designed prams that could take Wyatt’s ventilator and oxygen tank just to make it all possible. Mum, Sam, 24, added: “It was fantastic and he was amazing. “I was convinced he would be scared but his heart rate was fine and he smiled.”When I arrived at the church I couldn’t see anyone else there but him, I was just concentrating on him, everyone else was a blur.

“It just made it so amazing, he looked so relaxed, I was worried about how me might react to being out of his familiar surroundings but he just took it all in his stride. “You have no idea how important it was to have him here. I can’t thank the hospital staff enough. “We are hoping to get him home within the next couple of months, the house has had to be altered for all the stuff he needs with the tracheostomy.  Even though he is still a poorly baby, Sam says “Wyatt is progressing really well and continues to amaze us all the time with his strength. “After we’d chosen the name Wyatt we found out that it means ‘brave warrior’, and it really couldn’t be more true. “But now we can look forward to the future.”

We helped Sam and Brian share their story with Pick Me Up magazine as an exclusive deal.  Pick Me Up magazine out-bid all other publications to win the rights to tell Wyatt’s amazing story.  If you would like to tell your story, help others in a similar situation, or raise awareness of an important cause or issue, contact us today.  You can read more about how to sell a story to the press here. 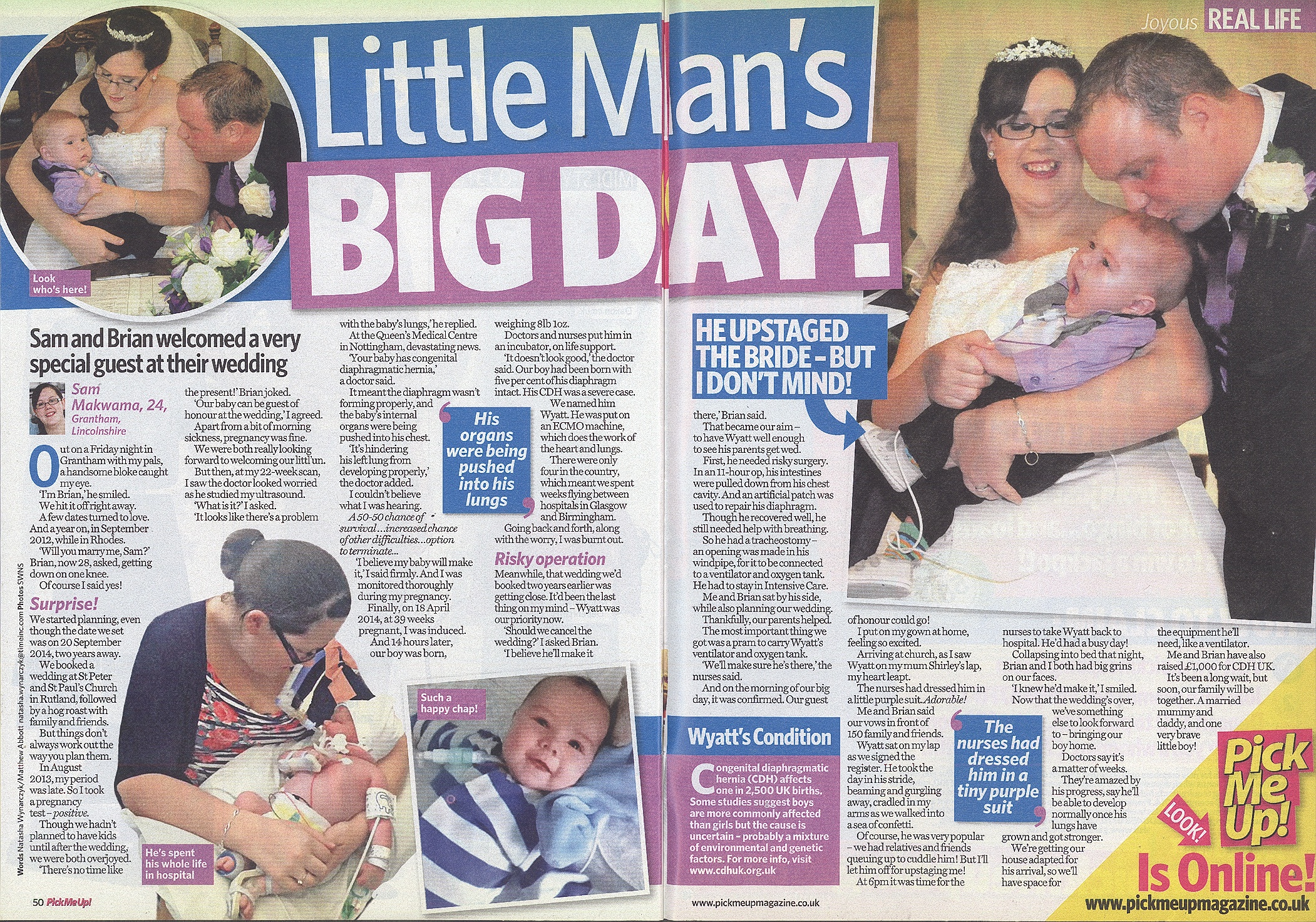