Annie always wanted another baby after daughter Lillie and son Jayden were born in April 2011, so was delighted when she realised in January she was pregnant again, but she didn’t count on having two sets of twins! 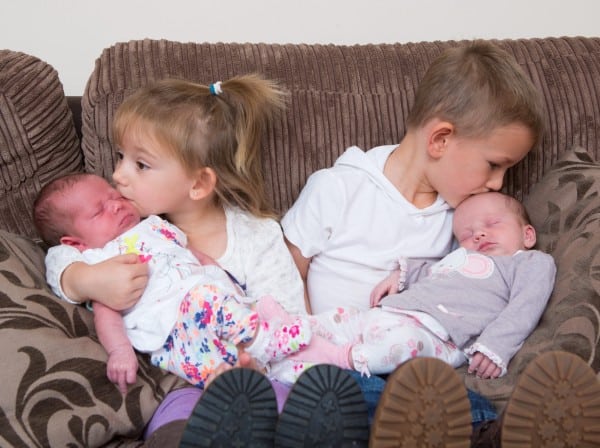 Annie and Rich’s joy turned to shock when they had the 12 week scan and were told they were expecting two new arrivals. Annie had managed to double her work load after giving birth to daughters Georgie and Frankiee at 21. The full-time mum turned 22 just two weeks after the non-identical twins arrived just five minutes apart on September 10, making her the youngest woman in Britain to give birth to consecutive sets of twins.

The Royal College of Midwives say they have not heard of anyone in the UK having two sets of consecutive twins at such an early age, which are much rarer than having a pair separated by a single baby. Annie, who now gets through 140 nappies a week, said: “I guess we are just a bit super fertile. “It’s obviously a record I never set out to achieve. I do feel blessed that my family feels absolutely complete at such a young age.

“Now we’ve just got to get married. “We worked the odds out of more than 700,000 to one, just because it’s so rare to not have a ‘filler baby’ between twins. “When they told us it was not one but two babies in there we couldn’t believe it. “The shock took forever to get over. Rich went white and his jaw hit the floor. 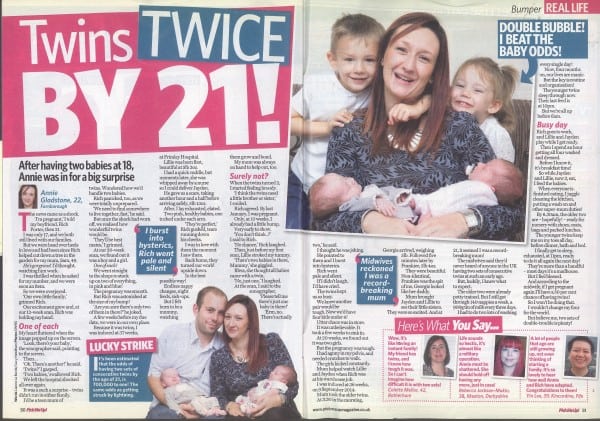 “But now they’re finally here, I wouldn’t change them for the world. “I mentally prepared myself for complete chaos at having four children under four, but luckily they are all very well-behaved – most of the time. “It has actually been a help having twins before because I knew what to expect second time round.” While neither Annie or Rich are from big families, without any history of twins, their double blessing has brought them closer together.

The healthy new arrivals, who like their older siblings are non-identical twins, were born just five minutes apart after a very short labour. Annie said: “The labour was very quick – just over one hour. “As soon as I saw them I fell completely in love. They are both absolutely gorgeous. “Frankiee looks just like Rich and Georgie looks just like me.

“The midwife told us that since I’ve already done it twice, we’ve got a 50 per cent chance of having twins again. “I know there’s nothing wrong with us, we’re just probably a bit super fertile. “We’ve decided no more after this!” Rich added: “We’ve got four girls in the family so Jayden and I are slightly outnumbered these days. “But he is going to be a brilliant big brother to them all.”

Jacque Gerrard, director for England at the Royal College of Midwives, said: “I have been a midwife for over 30 years and have never seen someone at such a young age have two sets of twins in succession like this. “As a mother of twins myself I know what she is going through and I wish her all the best. “Women having twins and multiple births are monitored closely throughout the pregnancy particularly when it is a teenage pregnancy.

“The experience gained with her first set of twins was no doubt helpful when she gave birth second time round.” Annie’s hectic routine is seeing her get through at least 20 nappies a day, and put on at least two loads of washing. She said: “I have to follow a very structured daily routine otherwise I’d never get anything done.

“We are all up before 5:45 am most mornings. “Lillie and Jayden play while 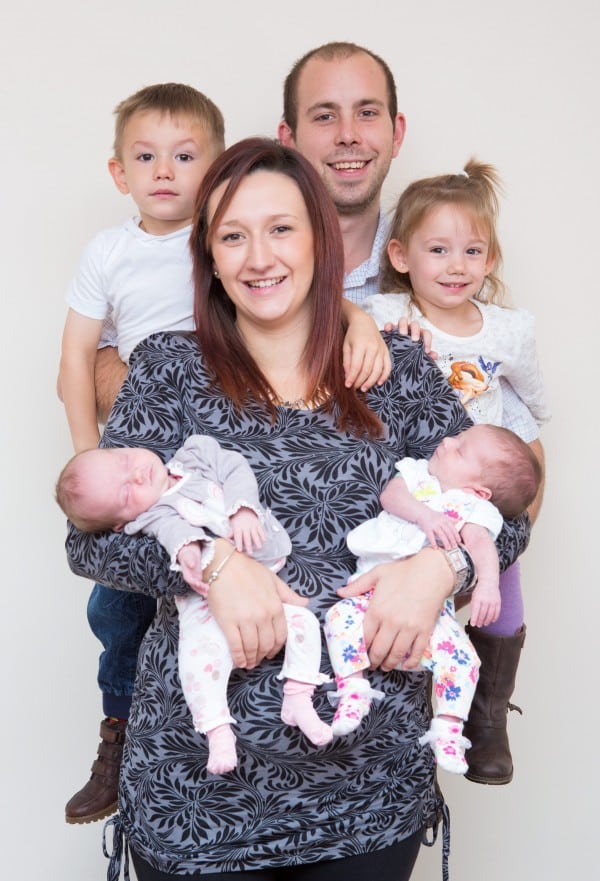 I get myself ready and then I get all four of them washed and dressed which takes about an hour. “At 7am I prepare Lillie and Jayden’s breakfast and while they are eating I feed the twins. “When everyone is finished I clean the kitchen and sterilise the bottles and put a wash on. “At 8:30 the oldest two are ready with coats, shoes, bags and packed lunches ready to go to nursery.

“Then I’m home alone with the girls while Rich is at work. “We put the oldest two to bed at 7pm and I finally head to bed at 11:30pm ready to do it all again the next day – though the youngest twins have me up about 3-4 times a night. “We are getting through about 20 nappies a day, 140 a week, because the eldest two aren’t in nappies any more.

“The babies feed every three hours so a 900g tin of milk lasts us just three days. “I have to do at least two wash loads every day to keep on top of everything. “It’s a bit mad, but I wouldn’t change it for anything.”

We sold Annie’s story to Pick Me Up Magazine (who bid the most for exclusive rights to print their story in the magazine).  If you have a story to share, get in touch today and find out what your story is worth.  Simply fill out the two minute valuation form on the right hand side of this page, or contact one of our friendly writers via our contact us page.