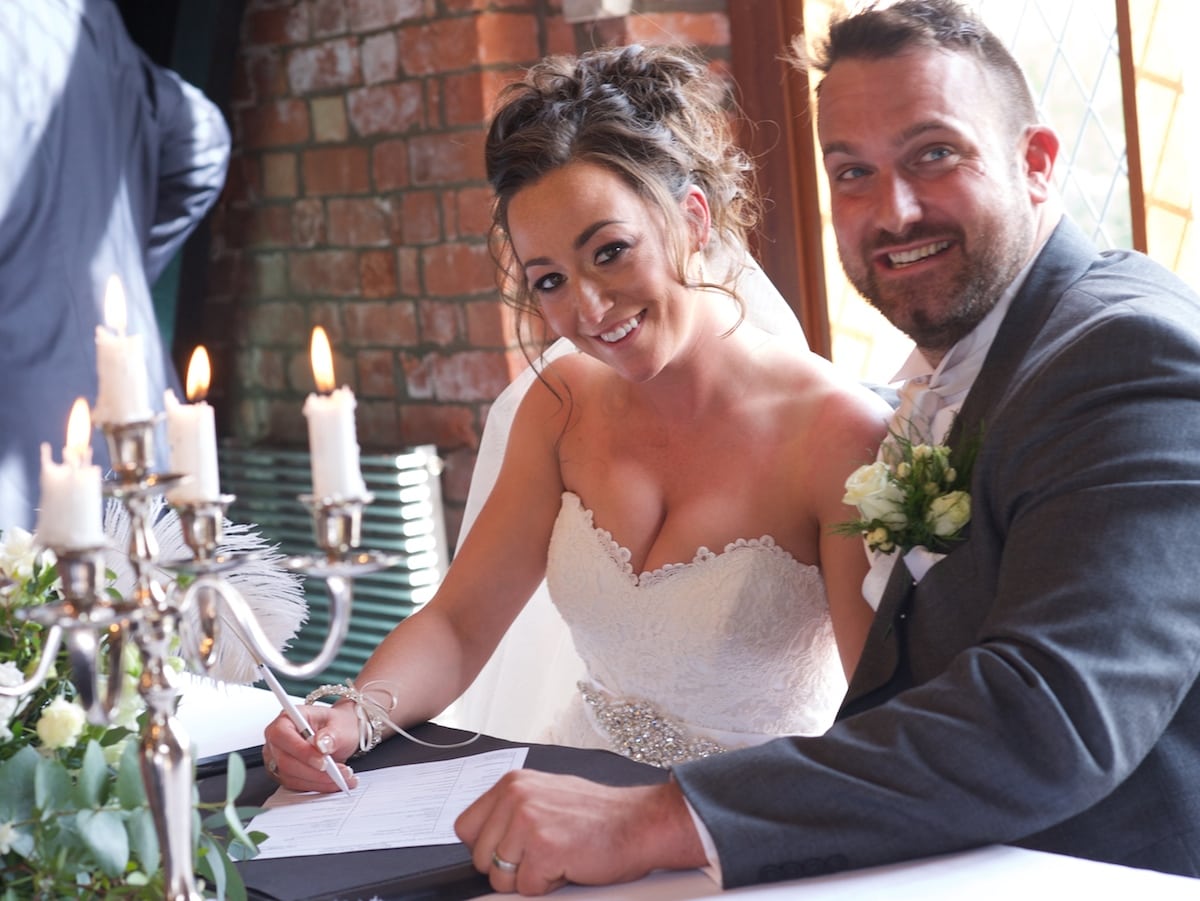 Our Take Me Out Wedding: SellUsYourStory.com is part of SWNS, which provides around 20% of all daily print news.  We don’t only help people share their gritty news stories, we love helping clients get the most cash for telling their quirky relationship stories or funny real-life experiences.

This week we helped Take Me Out Greig and Kerry share their romantic relationship story about meeting on television and going on to have a themed Take Me Out Wedding.  If you have a relationship story you would like to share with the press, get in touch today using our Story Valuation form.  One of our friendly trained writers will get straight back to you to let you know how much your story is worth.

There is no obligation, our service is free, and we guarantee to get you the most cash for your story.  Read more here: Sell My Story, or see other ways to contact SellUsYourStory.com.

When I realised there was just me and one other girl with our lights left on, I thought to myself, oh, no, what have I got myself into?

He wasn’t my type at all. He was a model and was probably wearing more hairspray and fake tan than I’d worn in my entire life. But when he came down in the Love Lift, and Paddy McGuiness delivered his famous line: ‘No likey, no lighty’, I forgot to turn my light off. And even after cringing as he did his little act at end, and his mum told viewers what a nice boy he was, my light was still on.

I’d only gone on the show after a friend put me forward. It wasn’t my thing at all. I was a country, outdoorsy girl at heart. I’m into sports and am from a farming background – a long way from the glitz and glamour of ITV’s flagship Saturday show, Take Me Out.

I’d just got out of a horrible seven-year relationship, so I wasn’t looking for romance and I definitely wasn’t looking for love. But there I was, dolled up to the nines, standing behind my podium in front of hundreds of strangers, and millions of viewers, silently praying not to be picked.

And as the crowd gasped and oohed and ahed, he leaned in close, whispered he was sorry, and turned out my light. Phew!

I wasn’t going to be whisked off to Fernandos and I was over the moon! Back home in Dublin, I was relieved to get back to uni where I was studying to become a veterinarian. But a few weeks later I was back in the UK at rather raucous Take Me Out end-of-season party held in a mansion in the Welsh countryside.

“Oh, Greig?” she said conspiratorially. “All the girls know about Greig, are you kidding me?” It turned out that Greig, 33, was quite a hit when he was on the show. All the girls loved him – he was muscular, outdoorsy, and flirtatious. He sounded just my type.

He turned one light out and left one light on and whisked a girl off to Fernandos, in Cyprus. Although viewers of the show were made to believe the couple hit it off, lucky for me the reality was they were just friends.

As I stood there staring, my eyes met with Greig’s across the pool and there was an immediate spark. You could say it was love at first lighty.

We got chatting and it turned out that we both loved dogs. We just clicked and we even shared a cheeky snog in the pool at the end of the night. But once again I had to go back to Dublin and Greig went home to Norwich. But that didn’t stop us texting each other all the time.

Three months later we met up again at a Take Me Out reunion in London and sparks really flew. Within three months we had moved in together in a shared house. 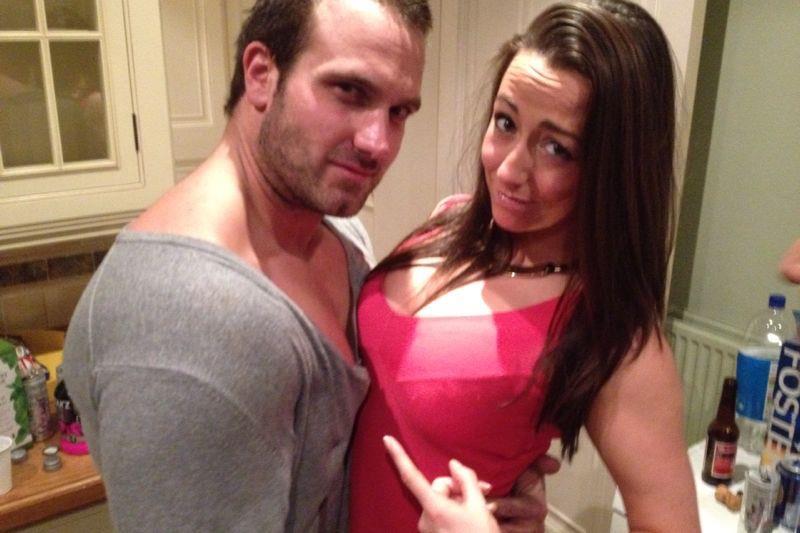 While I was deliriously happy, it soon became clear that Greig wasn’t the clean freak he’d presented himself as on the show. Greig’s video showed him prancing around his flat with a feather duster. “It was all an act, Kerry,” he confessed later on with a wink. Greig was slowly becoming the man of my dreams, but he’d never done a day’s cleaning on his life!

As the summer came to an end, I was due to start my final year at uni. I’d always wanted to be a veterinarian, but now I was desperately unhappy to be going back to it. Not because I’d changed my mind, but because I was having to leave Greig behind.

“Listen, why don’t I come with you?” Greig said. “Come with me where?” I said, confused. “Where do you think, to Ireland. I could move my business out there.”

Greig had built up his own landscape gardening business and it was doing really well. If he moved to Northern Ireland, where my family lived, we’d only be a few hours from each other, instead of a country away. I jumped for joy.

After we both moved we lived on our computers and phones, Skyping, Facebooking and calling each other whenever we got a chance. Greig was such a cheesy romantic and barely a week went by that I didn’t get a bunch of flowers delivered with a note that read, ‘just because’.

Then one day out of the blue, Greig asked me a question: “Do you want a diamond ring, or do you want a holiday?”

I didn’t think for a second that he was serious about getting married so, of course, I chose the holiday. A few months later, we were sunning ourselves in the gorgeous Dominican Republic.

My hand went to my mouth and my heart leaped in my chest. But poor Greig couldn’t get his words out, bless him.

Usually he’s a hopeless romantic with the gift of the gab, but as the sun set behind us on the horizon, he went to mush. I knew what he was asking me and couldn’t wait to yes. But the drama didn’t end there. You can’t go to the Caribbean without having a dip in the crystal clear waters. And that’s exactly what we were doing when Greig asked me if I still liked my ring.

“Oh my god, It’s beautiful,” I said. And it was. It was a white gold halo engagement ring with a huge diamond surrounded by smaller ones. But as I felt for it on my finger, a giant wave crashed into me, knocking me off balance.

When I managed to get back on my feet, I looked at my finger. “Greig, my ring!” It was gone, engulfed by the frothing white surf. I dived down in the hopes of seeing the diamonds glinting in the sunlight, but all I could see was cloudy sediment whirling at my feet. I came up for air and went down again. Nothing.

Greig was doing the same, and both of us were panicking, unable to hold our breaths for longer than a few seconds, as the waves kept coming throwing up more sediment and sand and foaming surf.

Greig ran to the shore and managed to get a metal detector, and for the next four days and nights we scoured every inch of the shoreline looking for it. But we weren’t the only ones. Hundreds of locals and tourists heard a diamond ring was whirling around out there somewhere and had come to ‘help’.

We unearthed all kinds of antique jewellery over the next few days. There wasn’t a scrap of metal left on the beach by the time we called it day. But there was no sign of my beautiful ring.

Greig hugged me and told me not to worry. “It’s only money,” he said. “And it’s insured. The main thing is. I love you and I want to marry you.” He was right. There were worse things that could have happened. “At least we have each other,” I said.

As soon as we got back home, and Greig had the ring replaced, we started planning the wedding, and there was only ever going to be one theme. Even though we didn’t meet on the same episode of Take Me Out, we felt like we owed it to Paddy McGuiness for bringing us together. He was our cupid and, without him and the show, we never would have met. A Take Me Out-themed wedding was the perfect way to say thank you.

I had finished my degree and was finally working my dream job as a fully qualified veterinarian specialising in surgery, and we had both moved to Norfolk. In March last year we got married at the Clandeboye Lodge Hotel in North Down, Ireland, in front of family and friends, and our three beloved boxers (who were our ring bearers).

Among the nods to the show, we had a four-tiered cake which had the logo of the show. The second tier had a plane flying over London to represent our long-distance beginnings; the third tier showed our dogs and the forth tier had Grieg and I in fondant poking our heads out of a white van – just like Grieg used to drive around in Northern Ireland.

We decided that our guests were going to sit at tables named after Paddy’s catchphrases, including, ‘Let the Mr see the Mrs’, ‘Let the chitti chitti see the bang’, ‘Let the bada bing see the bada boom’, and ‘Let the hanky see the panky’.

Paddy wasn’t there for our special day, but we made sure he was there in spirit. 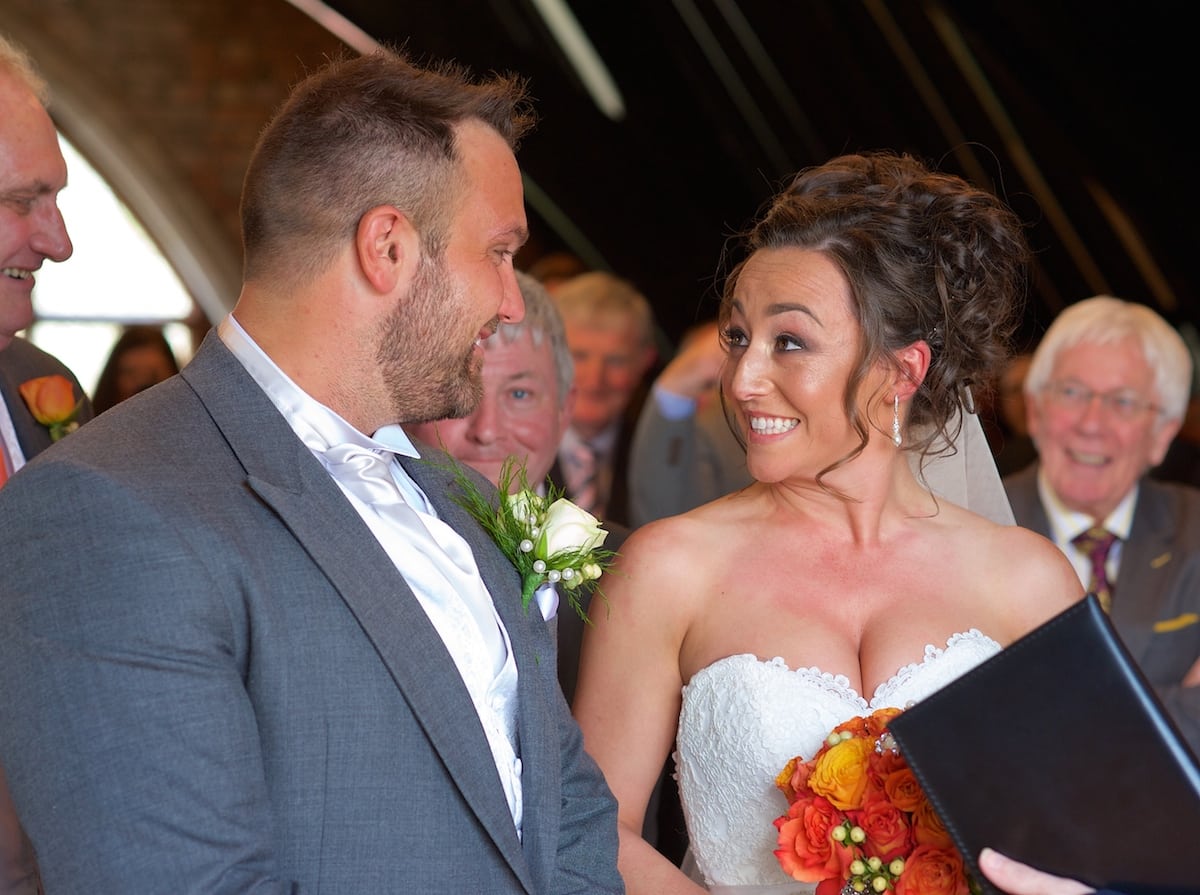