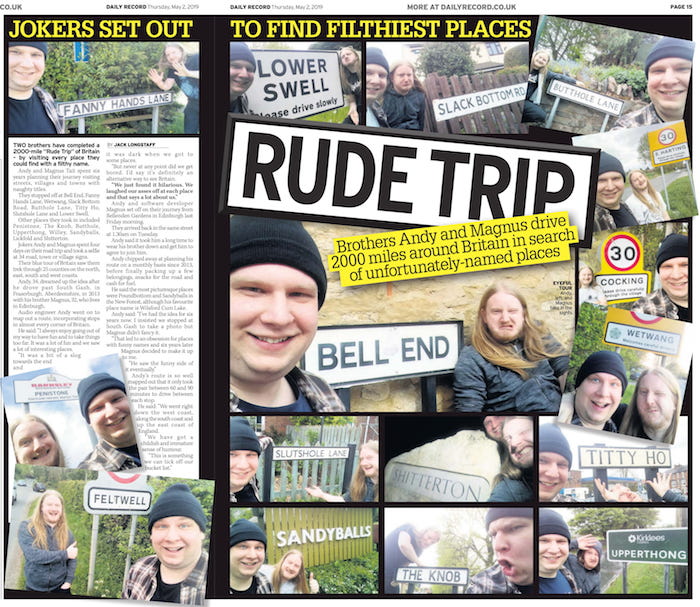 Do you have a funny, bizarre or amazing story? Would you like to know how to go viral in the press? You’re in the right place!

SellUsYourStory.com is part of the UK’s largest independent press agency. We work with every major media outlet in the country. Our team helps hundreds of people get their story in the press each week, for the highest payment possible.

You stay in control and there is no obligation. So get in touch today and watch your story fly.

How to go viral in the press with your story, images or video footage

If you have a story, photo or video that would make a great story. Or you want to know how to go viral in the press. Simply follow our simple three step guide:

Our agency supplies around 20 per cent of the daily news content in the UK. Here’s just one example of a client we helped recently.

Two brothers that drove 2,000 miles on an epic ‘Rude Trip’ of Britain – visiting every place with a RUDE name, were wondering how they could cash in on their trip and how to go viral in the press.

The brothers contacted SellUsYourStory.com using the Story Valuation form on this page.

We loved their story and photos, so we arranged multiple newspaper deals for the brothers. The pair sat back and watched the payments roll in.

The lads spent four days on their road trip and took a selfie picture at 34 road, town or village signs.

Their remarkable blue tour of Britain saw them trek through at least 25 counties on each of the North, East, South and West coasts.

The trip took six years for 34-year-old Andy, from Aberdeen, to meticulously map out.

He dreamed up the idea after he drove past a place called South Gash, in Northern Scotland in 2013 with his brother Magnus, 32, from Edinburgh.

Andy says he couldn’t help but laugh at a South Gash signpost and ever since that day has researched the location of other hilariously named places.

He then went on to painstakingly map out a route, incorporating 34 stops in almost every corner of Britain.

“I always enjoy going out of my way to have fun and to take things too far”, said audio engineer Andy.

“It was a lot of fun and we actually saw a lot of interesting places.

“It was a bit of a slog towards the end and it was dark when we got to some places. But never at any point did we get bored.

“I’d say it’s definitely an alternative was to see Britain. We just found it hilarious.
We laughed our asses off at each place and that says a lot about us.”

Andy and software developer Magnus set off on their journey from Bellenden Gardens, in Edinburgh, on Friday morning (April 27).

They arrived back in the same street at 1.30am on Tuesday Morning (April 30).

He says it took him six years to convince his brother to join him on the trip after constant pestering ever since the pair passed South Gash together in 2013.

Andy chipped away at planning his route on a monthly basis over the six years, before finally packing up a few belongings, snacks for the road and wads of cash for fuel.

He says the trip saw they visit some of the country’s prettiest places.

The most picturesque places for him were Poundbottom and Sandyballs in the New Forest.

He saw the funny side of it eventually

Andy said: “I’ve had the idea for six years now. I insisted we stopped at South Gash to take a photo but Magnus didn’t fancy it.

“That led to an obsession for places with funny names and six years later Magnus decided to make it up to me.

“He saw the funny side of it eventually.”

Andy’s route is so well mapped out that it only took the pair between 60 and 90 minutes to drive between each stop.

He said: “We went right down the west coast, along the south coast and up the east coast of England.

“We have got a childish and immature sense of humour.

“This is something we can tick off our bucket list.”

The places the brothers visited

How to go viral in the press and get paid

Simply send and outline of your story, images or video to us using the form on this page. We know how to go viral in the press, so you can rest assured your story or content is in the best hands.

You’ll be paid each time the content is used. You can track your payments in real-time using our Google backed tracking system. We guarantee the highest payments.

To find out more about how to sell a story, read our Sell My Story page.

You can also upload videos and images on our Sell My Photo and Sell My Video websites.