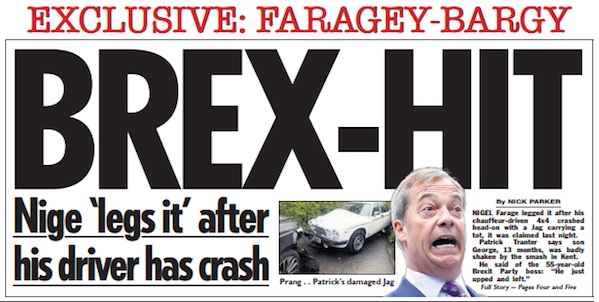 Do you want to sell a front page story to the national press?

We’ll pay you the highest fee for your story.

To sell a front page story, video, photo (or any other story) to newspapers, magazines, websites or TV shows follow our simple three step guide.

How to sell a front page story to the press

Our agency supplies around 20 per cent of the UK’s daily print news, and we work with every major news network in the world. This week we helped Patrick Tranter sell a front page story to The Sun after he was hit by Nigel Farage’s range rover in a head on collision.

Former UKIP leader Nigel Farage has now been banned from his local pub after he allegedly made a swift exit when he was involved in the head on crash with the landlord.

Patrick Tranter, 38, was driving home with his one-year-old son when his Jaguar was hit by Farage’s Range Rover, he claims.

But instead of checking on Patrick and his son, the Eurosceptic Brexit Party MEP is said to have fled the scene.

Patrick and his shaken baby son George were taken to hospital in an ambulance, and he claims his car has been written off.

Speaking from hospital, Patrick said police who attended the crash were forced to launch a “manhunt” for the MEP who was on his way to last night’s (9th) Question Time.

Mr Tranter, who suffered neck and shoulder injuries, has now banned Farage from his George and Dragon pub, four miles from the politician’s home. He said he’s served him “countless pints” – but won’t have him in the pub ever again.

Patrick, from Westerham, Kent said: “Man of the people my arse. He didn’t even bother to see if me and my little boy were OK. He just upped and left.

“Had he had done so he would have recognised me as I’ve served him countless pints and I worked with his daughter just over a year ago. There’s no way he’ll be welcome back in my pub – which has the most British sounding name going.

“I used to serve him pints and I worked with his daughter Victoria at a wedding about a year and a half ago. I run the local pub and by no means will he be welcome in my pub for a pint. He’s a terrible, terrible human being.”

Dad-of-one Patrick was driving his classic 1986 Series 3 Sovereign Jaguar along Clacket Lane, Kent, around 9:30am yesterday (9th) when he collided with a Land Rover.

He said Farage’s driver stopped at the scene, but the MEP made off.

Patrick said: “I had just dropped my wife off at the station for work.

“We were driving the opposite side of the road but their car was going at great speed. There was so much force that my car was pushed back into the bushes on the other side of the road.

“I ran out to see if my little boy was OK but Farage just got out of the car.

“Farage just walked out of the car. God knows where as it was a country lane.

“I turned around and asked one of his people, ‘Is that Farage?’ and she said yes. “I don’t think she was meant to say that.

“Police told me that the car would have been going at least 45mph but that is after both of us severely breaking.

“It would be pure speculation to guess how fast he was going but it’s his response which has really pissed me off. My car is a complete write off.

“It was a classic British car. It couldn’t have been more iconic.

“His driver was really courteous and waited by our car. He called the police and ambulance too. The police even launched a small manhunt for Farage. It was for his safety more so for any criminality.

“If he bothered to stop and see if we were OK he’d have recognised me. That man shouldn’t be anywhere near power.”

Patrick and George were rushed to Princess Royal University Hospital, Kent, where they were treated for neck and shoulder injuries, he claims.

A police spokeswoman refused to comment on whether Farage was being hunted. She said: “We were called following a two-vehicle collision in Clacket Lane, Titsey, around 9.55am (9 May).

“No one was injured as a result of the incident. The road was closed in both directions while the vehicles were recovered. We are not investigating.”

Sell a front page story, or any other story

If you would like to sell a front page story, or any other newsworthy story, please get in touch today. Use our Story Valuation form on this page to find out what a story is worth.

Find out more on the Sell My Story page, Sell a Video page, or the Sell a Photo page. You can also check out our dedicated Video Selling and Photo Selling websites.