Do you know anyone with Ginger Hair that would qualify for a ‘Ginger Discount Card’?

Did you see the story about the Ginger Discount Card?  Yes, that was one of our clients! We helped Richard Macrae place his story in the national press…

Ginger ninja, carrot top, ranger, ginger nut…  The remarks in the playground were cruel, but by the time I’d reached my teens I’d heard them all.  My hair had always made me stand out from the crowd. In my youth I’d resented my locks. It wasn’t so much the bright colour, but the target it made me. I was always the butt of the joke and would receive a real ribbing. But as I got older I’d learnt to brush off the jibes and embrace being a redhead.

I grew more comfortable in my own skin and realised just how much a part of my identity being ginger was. It helped to shape me as a person and made me thick-skinned. I even began to relish the attention it got me. With that I started to let my hair grow out – to shoulder length – and found that it suited me more. In my 20s, on boozy nights out I could always count on some lout to call out ‘Oi ginger’ across the bar. But instead of kicking off and taking it as an insult, I just flashed a grin. Because being ginger had its benefits too. Sat around the table in the pub, my friend, Douglas, 30, turned up. Bounding over, he patted me on the back and said: ‘Happy birthday mate. I’ve got something for you.’ The rest of our pals were sniggering as Douglas pulled a card out of his pocket and presented it to me. 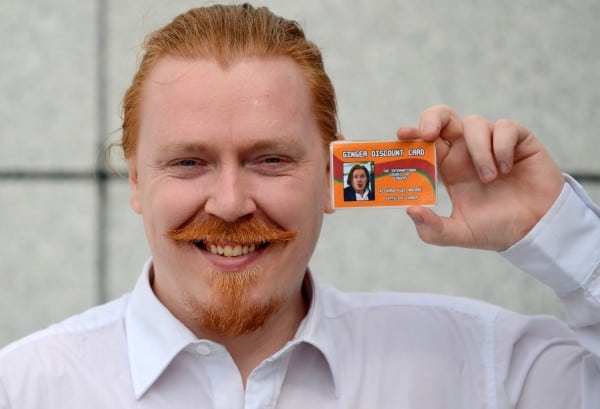 It wasn’t a birthday card, in an envelope, like I was expecting, but a small piece of card – the size of a driving licence. ‘It’s a ginger discount card,’ Douglas said proudly. Bright orange, with my photo on the front, it read: ‘Richard Macrae, certified ginger.’ I couldn’t help but chuckle.

It had been a running joke of ours and now Douglas had finally made it. We were forever playing pranks on each other – and this, it seemed, was the latest. ‘I crafted it myself,’ he laughed. ‘You’ve put up with a lot of stick, you might as well get something for it.’ ‘Do you think it will work?’ I said. ‘You’ve got nothing to lose,’ the group told me. Ushering me off, they said: ‘Go and give it a try.’ I slid up to the bar to order the next round of drinks. ‘Umm… do you accept these?’ I asked, flashing my new card nervously.

I gave the barmaid a cheeky wink and she immediately burst out laughing. ‘Is this real? Where did you get it?’ she asked. ‘It’s brilliant.’ I explained it was a gift and she was kind enough to apply a 20 per cent discount for me. I turned around and gave the lads a ‘thumbs up’, before carrying our pints over. The guys couldn’t believe it. ‘One hundred per cent success rate, so far,’ I said, when I got back to the table.

After that I thought I’d try my luck elsewhere. I never expect to be given money off, but hope it will give people a bit of a laugh. I’ve whipped it out in bars, cinemas, taxis, on buses and kebab shops. Alongside a little charm it goes a long way. I’ve even used it as ID to get into nightclubs. Most bouncers think it’s quite funny. 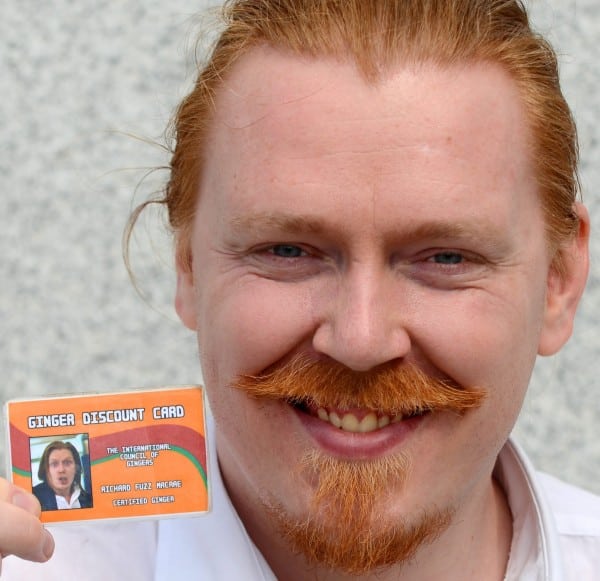 My reputation even precedes me; once I was asked by a security guard if I was the ‘ginger discount guy’. ‘Fame at last,’ I thought to myself. It’s always in my wallet and comes out with me more than my bank card. I rarely have the card turned down – and it at least gets a giggle.’

‘It opens up to a bit of banter back and forth but I never try for any specific amount of discount. Any money off is always handy. Although it doesn’t always work. Using it did once backfire and get me cut off at the bar. The staff thought that if I was attempting to use it I must be too drunk to serve. And my girlfriend, Misha, 26, finds it less amusing if I try and squabble over the bill for a slap up meal at posh restaurants. ‘Don’t even think about it,’ she whispers, when the waiter gets to us. ‘It’s embarrassing.’

Over the years I’ve saved easily about £200. A few pounds here and there easily tot up. People have always given me stick for my hair colour, but now I’m going out three nights a week and saving a fortune. The joke’s on them. Other redheads are even now asking me where they can get their hands on their own card. I’m quids in, thanks to my ginger hair.’

Do you have a story that you would like to sell to the press?  We guarantee the highest fees and widest coverage.  Simply fill out the ‘Sell My Story – Valuation Form’ on this page and one of our team will get back to you with a valuation for your story.  There is no obligation and we won’t use anything without your permission.

To read more about how to sell a story to the press, click here. 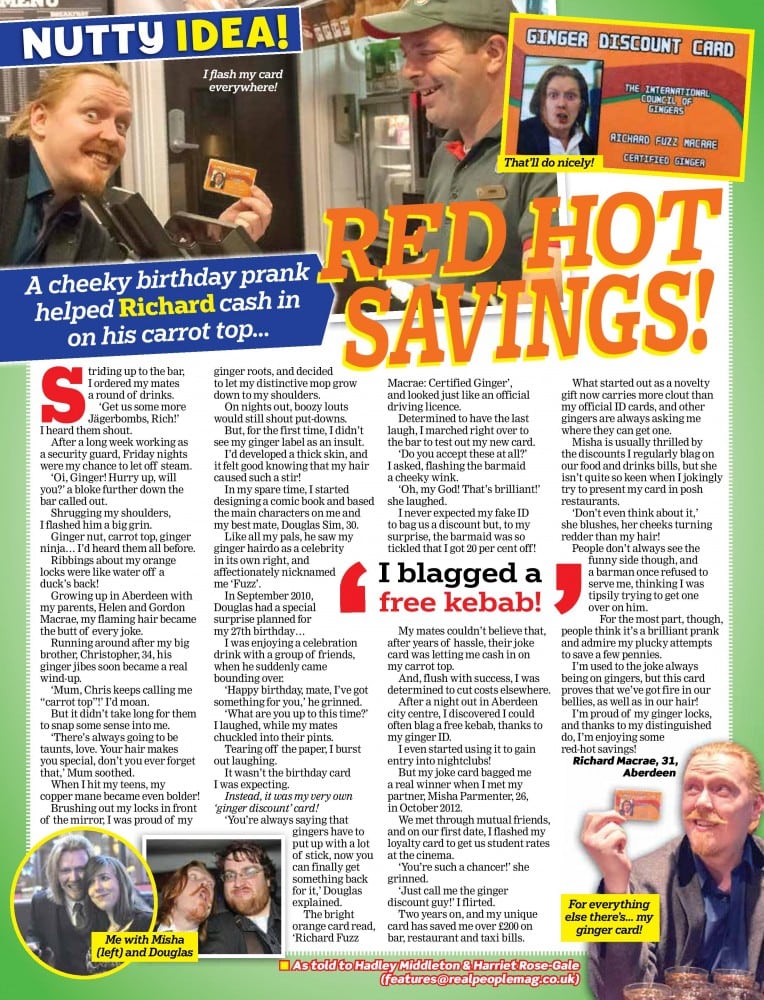