A shop assistant at a John Lewis children’s section has become Frozen Princess Elsa lookalike – after getting pestered by young fans at work. 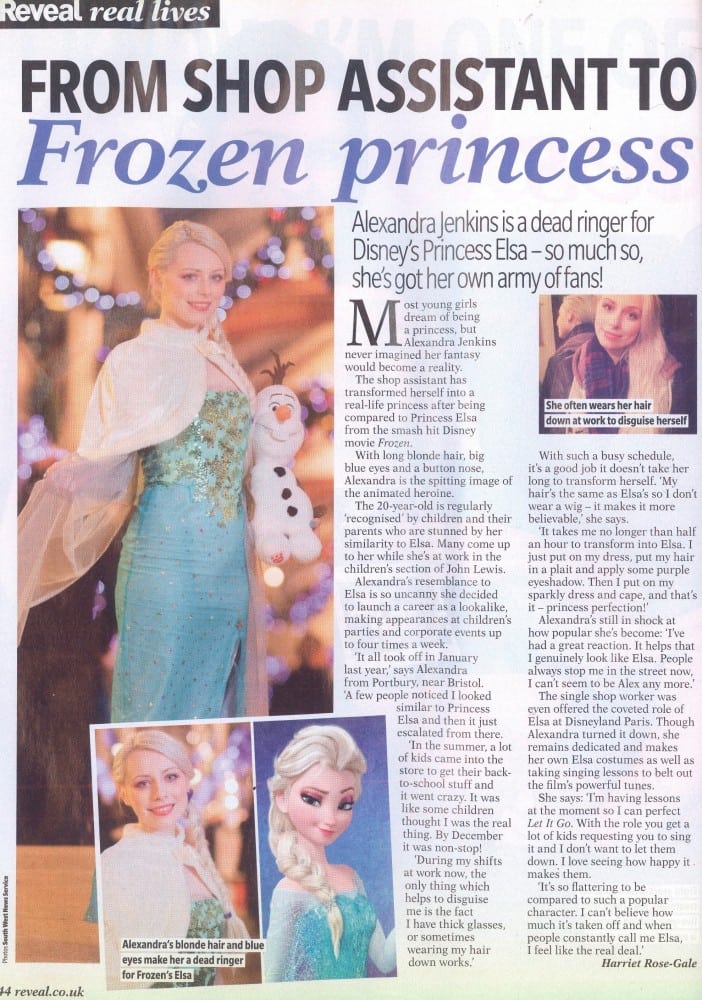 Pretty Alexandra Jenkins, 20, was constantly ‘recognised’ by children and their parents who noticed her uncanny resemblance to the popular Disney Princess, Frozen Princess Elsa.  The only way to disguise herself at work is to wear thick spectacles – much like Clark Kent in Superman. But now she has taken on a second career as an Elsa lookalike, appearing at children’s parties and corporate events.

She said: “It all kind of took of in January last year really. I was told by a lot of people I looked similar to Elsa and then it just kind of escalated from there. “By the start of December I was getting told I looked like Elsa all the time; I get parents come up to me all the time telling me I look like Elsa, as well as the kids. “At work the only thing which is able to disguise me is the fact I have glasses, or sometimes wearing my hear down works.

“If I don’t wear my glasses, or even when I do sometimes, the likelihood is I get a lot of people coming up to me telling me I look like Elsa. “Over the summer lots of kids come in to get their back to school stuff and they tell me I look like Elsa, or their parents start pointing me out.” Alexandra, of Portbury near Bristol, has worked in the children’s clothes section in John Lewis at Cribbs Causeway, Bristol, for almost three years.

But her blonde plait and poignant face shape means it only takes her half an hour to transform herself into the famous Princess after work or at weekends. Alexandra says she now in popular demand and is constantly asked to do children’s parties as well as corporate events. She added: “I’ve had a great reaction. People are always asking me if I do events or parties. It helps that I genuinely look like her. People stop me in the street quite a lot.

“My hair is real so I don’t have to wear a wig which makes it a lot more believable for the kids. “It takes me no longer than half an hour to transformed into Elsa, I just put on my dress, put my hair in plait and then put some purple eye shadow and the rest of my make-up on. “The make up takes the longest amount of time but it really isn’t a big job.” 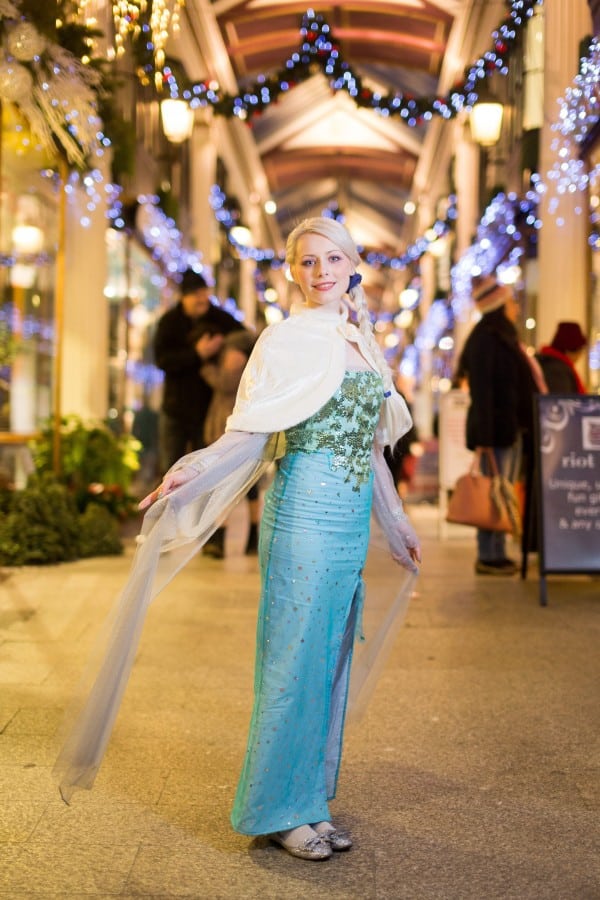 Single Alexandra – who was offered the role of Elsa at Disneyland Paris, but turned it down – is now booked for around four appearances a week. She has even taken up singing lessons to perfect the voice of the popular film character. “I’m having singing lessons at the moment so that I can perfect ‘Let it Go’,” she said. “With the role you get quite a lot of kids asking you to sing it, I don’t want to let myself down. It also really helps you to get into character, blasting it out.

“It can be frustrating sometimes. However much I look like her obviously I am still Alexandra as well and sometime people forget that. “However it’s lovely to be compared to such a popular character. People can obviously see the similarities as it draws attention to me all the time.  “I’m so surprised by how much it has taken off. There are so many other lookalikes around so I was amazed at how many people started booking me.”

Anyone wishing to enquire about bookings should visit Alexandra’s Facebook page: http://www.facebook.com/queenelsauk

We helped Alexandra share her story with Reveal Magazine as an exclusive (Reveal bid the most for the publishing rights to Alexandra’s story).  If you have a fun, heartwarming or lighthearted true story you’d like to share with the press, please get in touch today.  We’d love to hear from you.  Simply complete the two minute valuation form on the right hand side of this page and we’ll get back to you with a valuation.  All messages are confidential and we won’t print anything without your express permission.

To read more about the story selling process, visit: https://www.sellusyourstory.com/sell-my-story/