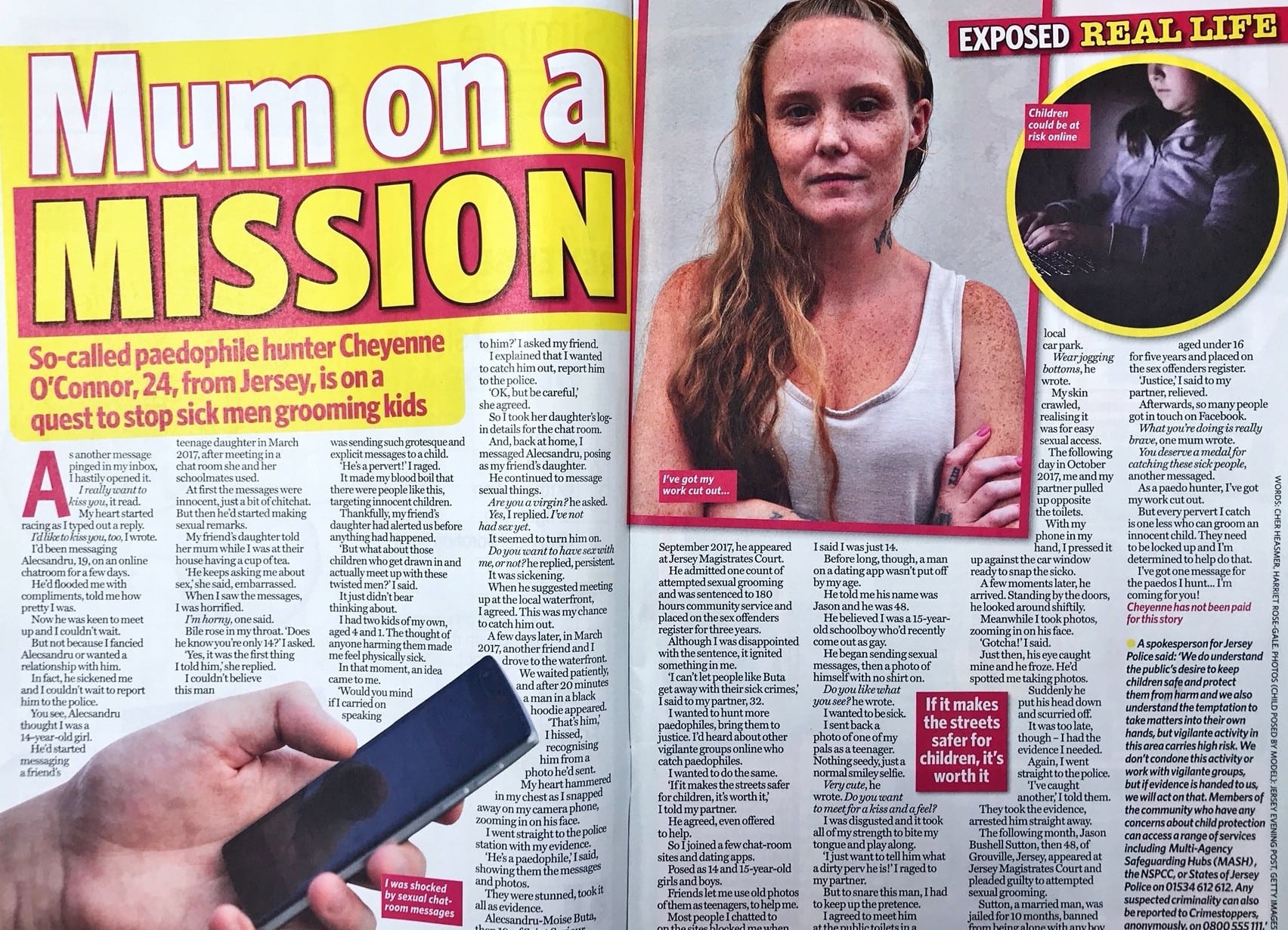 Mum-of-two Cheyenne O’Connor contacted SellUsYourStory.com to share her story. Cheyenne became a paedophile hunter after feeling let down by the justice system.

SellUsYourStory.com is part of SWNS, the largest independent press agency in the UK. We guarantee the highest story payments and can help you turn your experiences into cash.

Fill out the Story Valuation form on this page and tell us a little about your story. We’ll let you know if we can help. Our service is free, and there is no obligation.

Why I became a paedophile hunter

A female paedophile hunter has vowed to continue her campaign to ‘clean-up’ her community after trapping her latest predator – by posing as a gay schoolboy.

Mum-of-two Cheyenne O’Connor, 24, launched her one-woman campaign as she felt victims were being let down by the justice system in Jersey.

Last year, UK newspaper The London Economic exposed the failings of the justice system in Jersey when it discovered that child abusers were still at large following the Jersey child abuse scandal a few years earlier.

Her actions have already led to three paedophiles being convicted – the latest of which was Joao Gomes.

Gomes, 27, was jailed for six months after he admitted trying to arrange a late-night meeting with the boy for a sexual encounter. He was caught by the actions of Miss O’Connor, who was back in court in Jersey to watch him jailed.

How Cheyenne operated as paedophile hunter

Miss O’Connor had posed as a 14-year-old boy on the gay dating website Grindr to snare him.

The court heard that Gomes thought he was meeting a boy called John outside a coffee shop in Jersey at 11pm on 30th November. However, what he found was Miss O’Connor waiting for him in a car and she took his picture before he ran off.

The court’s legal adviser Susie Sharpe explained that the previous night Gomes had tried to persuade the ‘boy’ to come to his friend’s flat, where he and a friend were drinking.

Gomes sent a number of messages of a sexual nature that continued until 2 am. He also sent pictures and a picture of the ‘boy’ was sent to him.

He pleaded guilty to attempting to meet a child aged 14 following sexual grooming. Furthermore he was put on the Sexual Offenders Register for five years.

Ms Sharpe said that contact began after the creation of the profile on Grindr on Sunday 26 November and went on until 30 November. The defendant provided a mobile phone number for them to chat on WhatsApp.

During the messaging, Gomes was told that the young male was only 14 the previous month.

‘He was asked if he minded that the boy was so young and he said “No”.’

Gomes also suggested that the 14-year-old could stay at his home.

Advocate Niall MacDonald, defending, said there was no evidence Gomes had ever before tried to communicate with an under-age person. In addition he argued that the conversation was promoted out of “dangerous curiosity.”

“He was quick to convey his remorse and guilt in police interview.”

Miss O’Connor welcomed his jail sentence and said afterwards she was determined to carry on catching child sex offenders as no-one else in Jersey was doing enough to stop them.

Her actions have previously seen Jason Sutton, 48, of Jersey, jailed for ten months last year after he was caught by Miss O’Connor trying to meet a teenage boy for sex.

A few months earlier she posed online as a teenage girl to catch another sex offender on the island. As a result, this led to a 19-year-old youth being sentenced to 180 hours’ community service. He admitted attempting to groom a teenage ‘girl’.

She said: “I have now had three sentenced so far. One being sentenced on the 16 February. One that was remanded in prison yesterday also for a plea hearing on the 8 February. Finally, one who is currently pending with the police to charge.

“I thought the publicity would make a few think twice about contacting me but it seems to have just got worse, nothing will stop them.”

Miss O’Connor has now vowed to continue her mission to rid the Channel Island of paedophiles, continuing to operate as a paedophile hunter.

She added: “Child abuse is a massive issue in Jersey and there is no-one else doing this but me. I decided to carry on based on how rubbish our justice system was. In addition, how many victims were being let down. The justice system is shocking when it comes to this.”

We negotiated an exclusive deal to publish Miss O’Connor’s story Pick Me Up magazine, as well as several national newspapers.

If you have a story that you think would make an interesting magazine or newspaper article, we want to hear from you.

Simply fill out the Sell My Story form on this page. Tell us just a little about your story, and one of our friendly team will get back to you. Our trained writers will let you know what your story could be worth (based on recent sales of similar stories).

They will also walk you through the process, making selling your story as easy and simple as possible.

Find out more about how to Sell a Story to a Magazine or Newspaper, or find other ways of contacting us here. We work closely with every major newspaper and magazine, as well as TV shows like This Morning and Good Morning Britain.