A policeman told yesterday how he collared a group of fugitives in the back of his squad car – nine missing pedigree PUPPIES!

PC Mark Wallace was driving along a country road when he spotted the pedigree pets and an adult dog wandering along with no owner in sight. He quickly ushered the mother Australian Sheepdog into the car of a passing motorist who had also stopped – but the cheeky pups proved trickier to catch.

The traffic cop attempted to round them up in the back seat of his BMW but every time he opened the door to put one in another would leap to freedom. 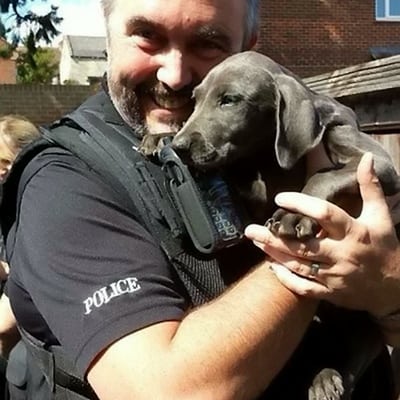 He eventually resorted to posting them one-by-one through an open window and ended up with all nine missing pedigree PUPPIES bounding around the car.

The naughty pups clambered into the front seats setting off the in-car camera, police radio and the blue flashing lights.

He eventually managed to get some of them to go to sleep in the footwell while he made a makeshift pen from his files and briefcase on the back seat for the rest.But it didn’t stop one of the dogs climbing out and licking his ear on the journey back to the police station six miles away.

Pc Wallace, 45, said: “It was the best day I’ve ever had in my 24 year career.”In this day in age there is a lot of hard work in policing, but this day, well, I was laughing my head off. It was absolute chaos. It was so funny.” Dog lover Mark was driving through the village of Seend in Wiltshire on Sunday, after finishing a job in nearby Worton, when he saw a car parked at the side of the road. He initially thought there had been an accident, but soon spotted the frantic driver running around after the puppies, which were Weimaraners and Australian Sheepdogs from two different litters.

Mark, an officer with Wiltshire Police, said: “It was quite a fast country road and I came round the bend on to the straight and I saw the car – then the puppies – and thought ‘what the hell is that?'”There was a mass of puppies and this poor woman who had spotted them first, trying to herd them. They were wandering all over the road.” He pulled over and managed to get the mum, an Australian Sheepdog called Meg, into the driver’s car. He then called in a police dog handler who took the adult dog – but couldn’t take the puppies. 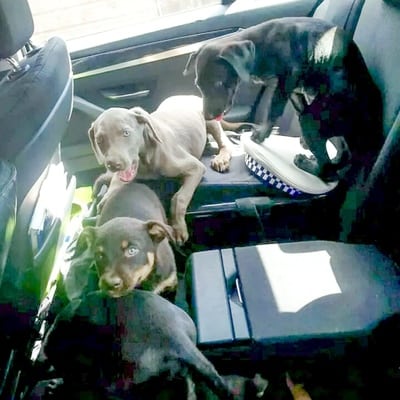 “The puppies were a bit more difficult to round up,” said Mark. “As soon as I opened the door to put one in another came out.

“I was having to wind down the window and pop them in one at a time.

“Next thing I knew all the puppies were everywhere – they were on the dash board, on the back window, everywhere.

“I was laughing my head off. They were stepping on the camera buttons and light buttons. It was absolute chaos, but it was so fun.

“I rounded the ones that weren’t sleeping to the back seat and used my letter briefcase to wedge between the seats so that couldn’t come forward. “But driving back I’ve got one licking my ear, and one trying to climb out of the window.”

After eventually bundling them all into his unmarked car, Mark drove them to Trowbridge police station where colleagues were on hand to care for them.

“They are all usually very busy at the police station, but I had plenty of volunteers to carry them into the station station,” he said. And after just 20 minutes the owner called up to claim the cheeky dogs had snuck out of an open door of her nearby home when her back was turned.

The dogs have all now been happily reunited with their owner – believed to be a dog breeder. Mark, who has a Jack Russell cross called Dougal, said: “They were so cute. If I’d had room at home, I’d have taken them myself.”

If you have a story you would like to share with a magazine, please get in touch today.  We’ll pay you for your story and, as this story proves, we’re not always on the lookout for shocking or grim stories.  Funny pets, heartwarming animal tales, and uplifting nature stories are always in demand.  Simply fill out the form on the right hand side of this page to get a valuation for your story.

To see some recent examples of  animal stories that we’ve placed in the national press, see our animal and pet stories page: https://www.sellusyourstory.com/news/category/animal-stories/