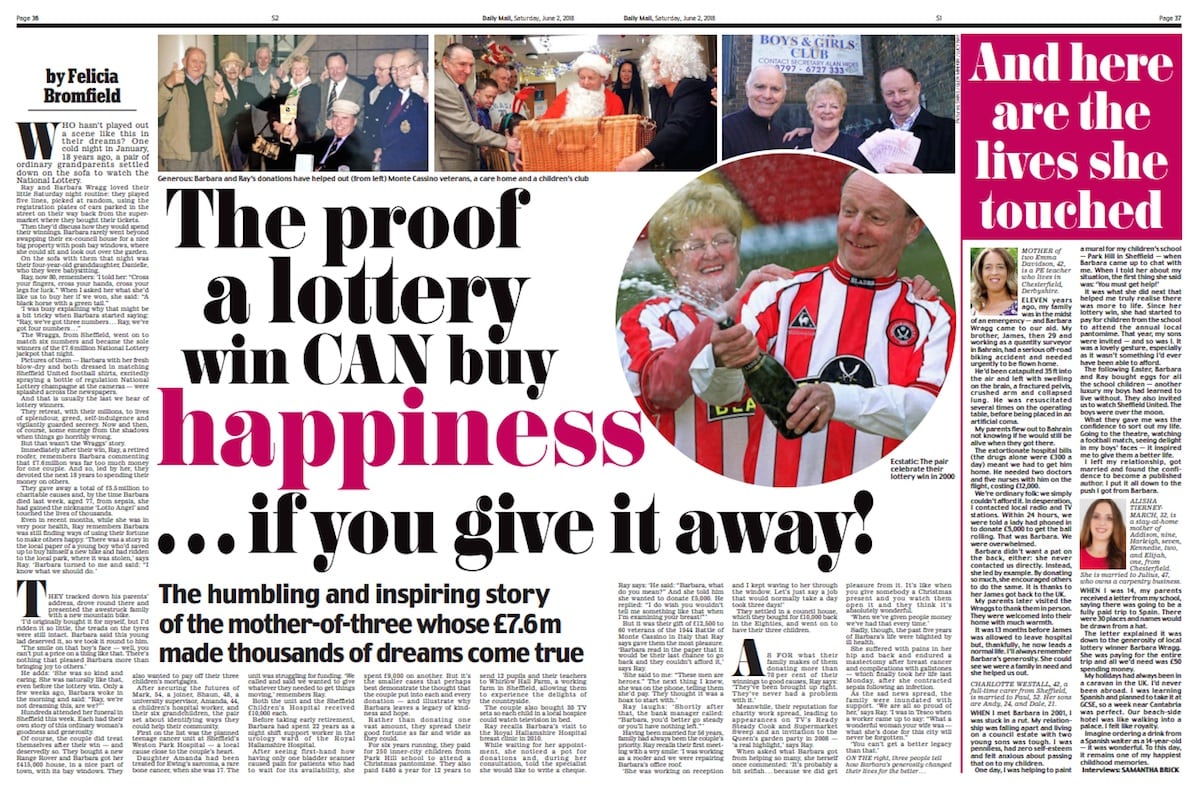 Would you like to publish a magazine tribute to a loved one? We can help.

If you would like to see a magazine tribute to a loved one, we can help. SellUsYourStory.com works with all of the national magazines and newspapers. In fact, we supply up to 20 per cent of all content to the UK’s leading print media.

If someone you know has achieved something amazing, triumphed after adversity, or has helped others – we can help you print a magazine tribute to a loved one.

How to publish a magazine tribute to a loved one

Simply fill out the form on this page to tell us a little about the story you would like to publish. Just a few lines setting out the main points of the story will suffice at this stage.

One of our trained writers will call you straight back if we think your story could be suitable for the magazines we write for. We’ll arrange publication of your story, ensuring that you are happy with the finished article.

Recent client who paid a magazine tribute to a loved one

We helped Ray Wragg pay tribute to his wife Barbara. Together they used their lottery winnings to help thousands of people in a less fortunate position.

We arranged an exclusive deal for Barbara’s tribute to appear as a double page spread in the Daily Mail.

You can read Barbara’s story here:

Tributes were paid today to Britain’s most charitable lottery winner who gave away a staggering £5.5m of her £7.6m fortune after she died aged 77.

Barbara Wragg passed away on Monday morning (21 May) after a five year battle with her health. She and her husband Ray, 80, won the National Lottery in 2000 but decided within a matter of weeks to give more than half of their winnings away.

Thousands of people benefited from their generosity while they retained a relatively modest life style.

It is thought the couple gave away around 70 per cent of their fortune to good causes over course of two decades.

They gave money to family and friends but also 17 separate charities including a number of hospitals in their hometown of Sheffield, South Yorks.

Husband Ray today paid tribute to his wife who he said had left behind a wonderful legacy of kindness and love.

The father-of-three said: “It is so very sad because Barbara, who has given so much to the NHS, both working for them and charitable donations, didn’t deserve this.

”She was so kind and caring. She was naturally like that, even before the lottery
win.”

The humble couple lived in a council house, which they bought for £10,000 back in the 80s. Each week they played five lines on the National Lottery, using different numbers each week, picked at random from registration plates.

“As soon as we knew we’d won we made our decision to give much of it away.

“By the time we went to bed we’d already worked out that we might give away about
four-and-a-half million pounds.”

Ray has told how the last five years had been “hell” as Barbara suffered with pains in her hip and back, went through a mastectomy after breast cancer and complications with gall stones – which finally took her life. She went into Northern General Hospital, Sheffield, for an operation to remove gall stones last week, but sadly never came out.

Her family, including their children, joiner Mark, 54, university supervisor Shaun, 48, and children’s hospital worker Amanda, 44, were by her side as she fought for her life.

The couple did treat themselves to a couple of luxuries including a Range Rover and quickly moved from their home, which they then sold for a steal to allow a young couple to afford a home of their own, into a five-bed executive new build house. It cost £415,000 in 2000 and boasted Barbara’s dream feature – bay windows.

They also went on their first exotic holiday having gone away for 31-years straight to
Torquay, Cornwall.

They opted for cruises around the Mediterrean and the Caribbean, as Barbara suffered with claustrophobia and didn’t want to fly.

The first cheques Barbara wrote came from the proceeds of the sale of their council home. They went to Sheffield Hallamshire Hospital to pay for a bladder scanner and Weston Park Hospital where Barbara and Ray’s daughter, Amanda, who had been treated for Ewing’s sarcoma, a rare bone cancer.

The couple also bought 30 television sets so each child in a local hospice could watch TV in bed.

Every Christmas for six years they picked up the bill for taking 250 children from a deprived inner city school to enjoy Sheffield’s pantomime.

Barbara recalls a visit to the Royal Hallamshire Hospital breast clinic in 2010.

While waiting for her appointment she noticed a pot for donations and during her consultation she told the specialist she would like to write a cheque. She said: “He asked me how much I wanted to donate and I told him £5,000. He said: ‘That will keep my young lads in research for a year’.”

Countless other charities have benefited including Bluebell Wood Children’s Hospice, the Make a Wish Foundation, Whirlow Hall Farm Trust, the Meningitis Trust and Help The Aged.

You get a buzz

“You get a buzz,” she explained. “It’s probably a bit selfish giving money away sometimes because we did get pleasure from it.

“It’s like when you give somebody a Christmas present and you watch them open it and they think it’s absolutely wonderful. Well, when we’ve given people money we get that all the time.”

The Wraggs helped a group of World War Two veterans on a trip to honour fallen comrades in 2003. They paid for 50 war heroes to visit Italy for the 60th anniversary of the battle of Monte Cassino in 2004 after they had failed to secure enough funding.

Mr Wragg said: “We’d like to say we made a lot of people happy with what we’ve been able to do to donate to a lot of charities.

“Winning the lottery changed our lives but not our persons.”

At this time, the couple had little money left to give away — just enough for their retirements. Though the opportunities to give were always at the forefront of their minds, turning family occasions into charitable events.

Simply complete the story valuation form on this page. Just give us the main points of your story, or why you wish to print a tribute to someone amazing.

One of our trained journalists will get back to you straight away if we think your story is suitable for our publications.

We’ll let you know how much your story is worth. We guarantee the highest fees. Nothing will ever be published without your say-so. We are here to make sure your story is told your way.

For more information about how to sell a story to a newspaper or magazine, see our Sell My Story page.