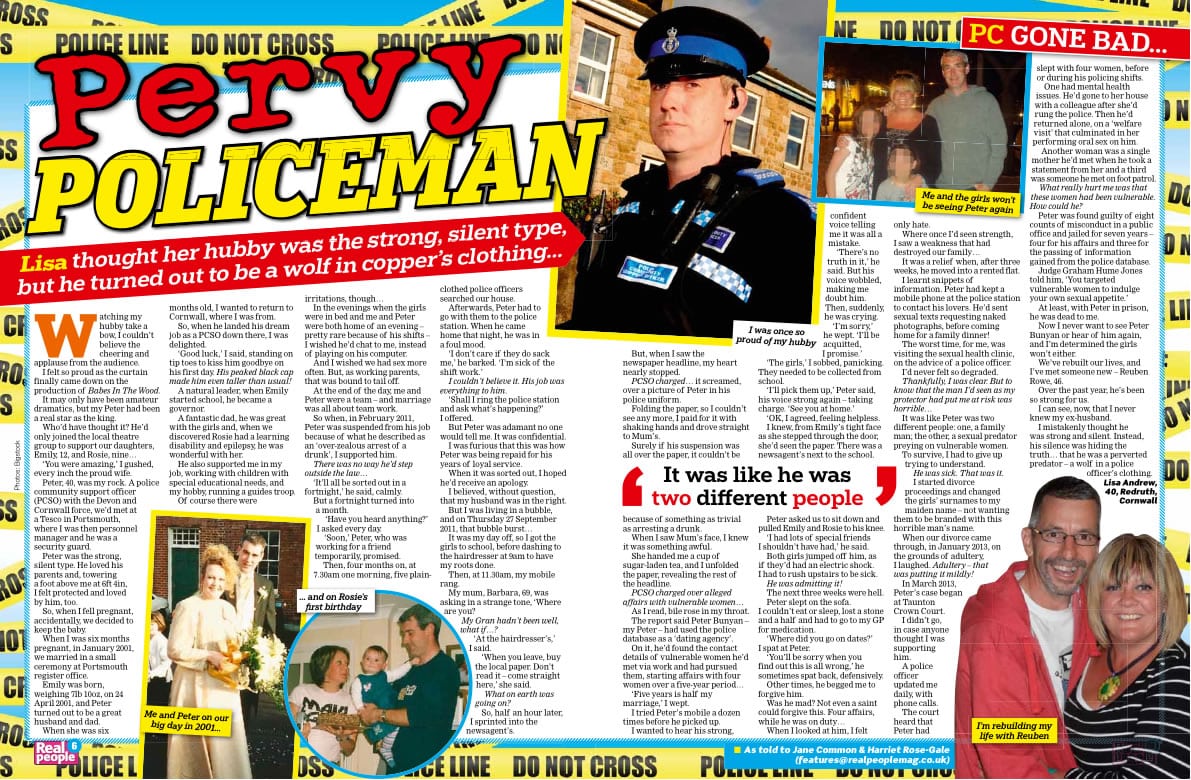 MY LOVE RAT PC HUBBY WAS COPPING OFF AT WORK

LISA, 40, THOUGHT LIFE WAS PERFECT. SHE HAD TWO BEAUTIFUL GIRLS WITH HER HUSBAND OF MORE THAN TEN YEARS. BUT LITTLE DID SHE KNOW, (HER NOW EX) PETER, 40, HAD BEEN LIVING A LIE AND ABUSING HIS JOB AS A PCSO.

HE WAS USING THE POLICE DATABASE AS A ‘DATING AGENCY’ TO TRACK DOWN THE CONTACT DETAILS OF VULNERABLE WOMEN ON HIS BEAT AND STARTING AFFAIRS WITH THEM, WHICH SPANNED FIVE YEARS.

CHEAT PETER EVEN KEPT A SECRET MOBILE PHONE HIDDEN AT THE STATION, WHICH HE USED TO ORGANISE LIAISONS WITH LOVERS AND WOULD TURN HIS POLICE RADIO DOWN TO SLEEP WITH THEM WHILE ON PATROL.

BUT HE WAS CAUGHT OUT AND JAILED FOR SEVEN YEARS. IT IS ONLY WHEN CLUELESS LISA READ THE LOCAL NEWSPAPER THAT SHE FOUND OUT WHAT WAS REALLY GOING ON.

BUT NOW SHE’S MOVED ON AND IS ENGAGED TO HER CHILDHOOD SWEETHEART. 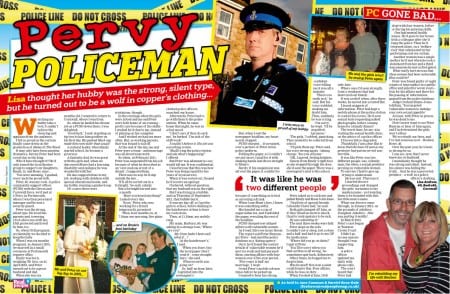 As I opened the local newspaper, my heart leapt up into my chest. There on the page was a picture of my husband of more than ten years, Peter Bunyan, 40. ‘PCSO charged over alleged affairs with vulnerable women’ the headline read. As I skimmed the article, taking in word after word, I started to feel physically sick. Tears streamed down my cheeks and I realised Peter had been playing me for a fool.

I was in the hairdressers, having my roots done, when I received a frantic phone call from my mum, Barbara, 69. ‘Go and buy a copy of the paper, whatever you do don’t read it but come straight to mine,’ she instructed. ‘What? Why?’ I stammered, startled by the urgency. ‘Please just do it,’ she said, hanging up before I had the chance to ask any more questions. I could tell by the tone of her voice that whatever had happened must be serious.

Jumping in the car, I made the short drive from the salon to her house, stopping at the newsagents on the way. As soon as I caught sight of the news I collapsed in my mum’s arms, sobbing uncontrollably as the extent of Peter’s cheating, lies and deceit began to unravel.

While working as an officer, with Devon and Cornwall Police, he had been using the database as a ‘dating agency’ to track down the contact details of attractive women on his beat. He had started affairs with numerous women, which spanned five long years. Peter had been charged with a string of offences relating to misconduct in a public office and would be going to court. I struggled to absorb the disturbing details. This wasn’t the man I knew, the man I had married.

My hands shook as I dialled his number. ‘I know what’s been going on… How could you do this to me?’ I cried, inconsolable. He tried denying it, but it was no good. It was there in black and white for the whole world to see. My family had heard about it on the radio and it was all over the TV too.

I knew as soon as it all came out that it was over between us. Nothing could make up for what Peter had done. The damage he caused was irreversible. But suddenly my mind flashed to thoughts of our daughters. We were blessed with two beautiful girls, Emily, 12, and Rosie, nine, and the thought of our family being torn apart was heart wrenching.

Just the night before we had all sat around the kitchen table at our home in Redruth, Cornwall, laughing and joking as we tucked into our favourite dinner. Those few hours earlier, I couldn’t have imagined life getting any better. Peter had always been the perfect husband and model father – as far as I was aware.

We had met in our 20s, while both working in a supermarket. I was on the check-outs and he was a security guard. After hitting it off straight away, we went on to tie the knot before having the girls. Like all couples, we had our ups and downs, but I would never have imagined that Peter would stoop to the level he had and copped off at work.

I knew he had been suspended from the force in February 2011. But he convinced me it was for an over-zealous arrest he had made and with no reason to doubt him, I believed what he said. ‘It’s ok, we’ll get through this,’ I said reassuringly, wrapping my arms around him, when he broke the news to me. Completely oblivious, I had stood by him until September 2011, without a clue as to what was really going on.

Now looking back I felt so stupid. Peter had spun a web of lies.

I knew rumours would be circling in the playground and I didn’t want the girls to have to hear the gossip. It was his mess and he had to sort it out. ‘It’s not fair on them,’ I told Peter. ‘You needt to sit Emily and Rosie down and explain your behaviour.’ He reluctantly agreed and after school he told the girls that mummy and daddy were no longer together. Breaking my heart was one thing, but doing it to our daughters was something else entirely. It was unforgivable.

I told Peter he needed to leave, but we continued to live under the same roof for three weeks while he found a new place. I just wanted him gone. I often felt like breaking down and screaming at him to try and get answers for the things he had done, but I knew I had to put on a brave front for the girls. We spent the whole time avoiding each other and when he finally moved out I felt as if a weight had been lifted from my shoulders.

Some moments I would catch myself staring at Peter trying to figure out how he had changed. I thought marriage was meant to last a lifetime, but my happily ever after had ended in heartbreak. Peter was seen as a pillar of the community. When he was wearing his police uniform, he seemed so trustworthy. I had no suspicions or doubts – he hid everything from me so well.

It turned out that Peter had a secret mobile phone, which he kept hidden at the station. He used it to organise liaisons with his lovers and would send and receive sexual texts too, requesting naked pictures of the women. ‘I don’t know where he has been or who he has been with,’ I said to my mum over-the-phone one evening. ‘I think I should get myself checked out.’

Walking into a sexual health clinic, in my late 30s, was so humiliating. I wanted the ground to swallow me up. I knew it had to be done and thankfully I hadn’t caught anything from my promiscuous husband. But it was better to be safe than sorry.

When Peter’s case came to court, I refused to go along. I didn’t want anyone to get the wrong impression and for it to look as if I was supporting him. He had put his sexual appetite before his public duty and bedded four women before or during his policing shift – sleeping with one lover up to ten times when he was supposed to be working. One of Peter’s lovers had mental health issues.

The jury heard he attended her address with a colleague after she called the police but returned alone after – with the ‘welfare visit’ which ended with her performing oral sex on him. A second woman, a single mum, met Peter when he came to take a statement from her after she reported her partner for domestic violence. Peter had spent ‘several hours’ taking the statement before asking her intimate questions and contacted her two days later to ask if he could visit for a ‘check-up’. He arrived at her home and is said to have pushed her against a wall before kissing her – marking the start of their encounters.

A third woman met Peter at neighbourhood unit and saw him again when she visited a police station to report domestic abuse from a partner. Peter then got in touch after obtaining her number – eventually buying her phone top-ups so she could send him naked pictures. Peter sent her sexual texts through the day while on duty, with one reading ‘woah, yum’ and ‘more please’. Another read: ‘More sex and more getting to know you’.

He met the fourth woman on a foot patrol and later arrived at her home. They then developed a sexual relationship too. He said his patch would take him past the address of the woman and he repeatedly called in to continue their affair.

Peter admitted wasting police time but insisted he had not neglected his responsibilities because he kept his radio on during the trysts. Randy Peter even took one of the women to the local police station where they had sex.

He denied 12 charges of misconduct in a public office but was found guilty of eight counts following a three week trial. Peter confessed that over the course of the affairs, between 2006 and 2011, he failed to correctly fill in police notebooks and records – leaving some days blank. He was convicted of sleeping with four women and illegally accessing data on the Criminal Information System. He was jailed for seven years after taking advantage of his profession and also given a three year sentence for the wrongful use of a computer and 18 months for sexual texting, all to be served concurrently.

The girls know that their dad is in prison and they understand that what he did was wrong. To avoid being associated with him, we’ve changed our surnames.

I thought I would never be able to trust a man again after Peter’s betrayal, but I’ve landed on my feet. I bumped into Reuben Rowe, 46, a man I knew when I was in my teens. He bought his children to the Rainbows class I ran and we got chatting. I had no idea his relationship was in just as rocky a state as mine and Peter’s, but we soon confided in each other and realised how much we had in common. We took it slowly at first, but I knew he was different and when he popped the question I had no hesitation in saying yes. I couldn’t be happier.

If you want to expose a lying, cheating love rat to warn other potential victims, please get in touch today.  You can contact us by using the form on the right hand side of this page.

If you would like to learn more about selling your story, please visit the SELL MY STORY page, or if you’d like to read more about SWNS, visit the ABOUT US page.