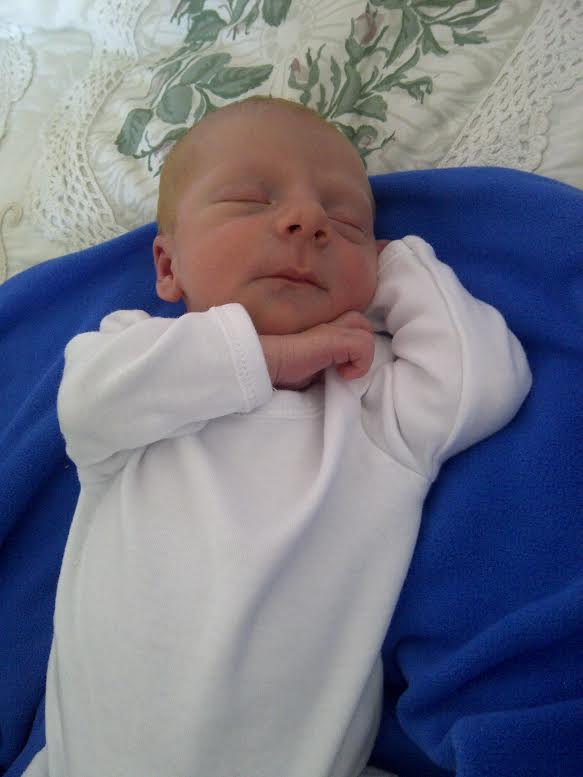 Toni, 25, was six weeks pregnant when she was attacked by one of her mum’s former tenants and neighbours, Rhiannon, 34.

The brute lashed out at Toni as she walked home from her job at a fish and chip shop, after a dispute about the property she had previously rented. She snarled: ‘I’ll kick the baby out of you’ while booting Toni’s head and stamping on it. Rhiannon pinned Toni to the floor, slapping and punching her while she screaming: ‘I don’t care, I’ll kill it. I’ll kick it out of you now.’

Police were on the scene in minutes as Toni had called them when she spotted Rhiannon storming towards her from a distance, after an argument earlier in the day. Toni had moved into a house her mum had rented to Rhiannon before, but after it was refurbished Rhiannon changed her mind and didn’t want to leave, begrudging Toni for getting to move in.

Rhiannon was handed an 18-month community order with supervision and Toni was granted a restraining order.  Now 32 weeks pregnant, a scan has confirmed her baby is unharmed. Luckily the neighbour feud did not lead to disaster… this time.

Perched nervously on the side of the bath tub, I gripped the plastic stick in my hand and waited with bated breath.  The minutes ticked by so slowly they felt like hours. ‘Come on,’ I urged, eager for the results.  My hands were shaking as a faint blue line eventually appeared on the home testing kit. Flinging the bathroom door open, I was met by my partner Carl’s nervous expression.

‘I’m pregnant,’ I shrieked, leaping towards him excitedly. A huge grin quickly spread across his face. ‘That’s great news,’ he cried, wrapping his arms around me and planting a kiss on my cheek. I had splashed out on one of the more pricey tests so I could tell that I was already three to four weeks gone.

I knew I shouldn’t really be telling anyone until I had been for my first scan, but when I popped to my mum Susan’s house for a cuppa I couldn’t help but blurt it out. ‘Aw love, I’m so happy for you,’ my mum cooed. ‘I can’t wait to have another grandchild.’

Mum only lived five minutes away from our home in Bryn Ifor, Caerphilly, and I always nipped to hers for a catch up, while Carl, 25, was at work. My little boy, Connor, three, loved playing at his nanny’s and she was always fussing over him so it gave me the chance to put my feet up. ‘Just you relax,’ mum would insist, as she ran around after Connor. He was such a handful.

My second pregnancy already seemed harder than the first. I was constantly exhausted, so relished mum taking my troublesome tot off my hands for a few hours each day. Instead of cravings, I had developed an obsession with the smell of citrus cleaning products. At home I would scrub the kitchen until it was spick and span and take deep breaths to inhale the lemon scent. While I was out and about I always kept a bottle of hand santiser on me so I could sniff it whenever I felt like I needed a fix. ‘You are strange,’ Carl teased when he caught me having a whiff.

We had always planned to add to our family and desperately wanted a little brother or sister for Connor.  As soon as I discovered I was expecting we rushed out and bought babygros, booties and plush toys for our new addition. Soon it was piling up and it was clear we needed more space. We talked about moving to a bigger house, somewhere we could settle down, and the timing couldn’t have been better. My mum owned a three-bedroom property just a couple of doors down from her house and her current tenant, Rhiannon Edwards, 34, had handed in her notice.

Mum was pleased to see the back of her. She had been nothing but trouble from the word go. Rhiannon and her fella lived there with their eight children and their dogs. Aged between a few months and 17 years old, Rhiannon’s kids seemed to run riot. When mum inspected her property she found doors were kicked in and there were drawings all over the walls. Rhiannon complained that it was too cramped for her brood and demanded mum get a conservatory or extension built to give them more room. But mum refused, unable to afford it, so Rhiannon decided to move out.

Rhiannon knew my mum was a soft touch and she had always been late paying her rent. She turned up on mum’s doorstep one day and said: ‘I did have the money but I threw it in the bin by accident.’ I couldn’t believe my ears – of all the excuses! ‘I’d be chasing the binman down, running after that rubbish truck if that were the case,’ I thought to myself. But I bit my tongue, not wanting to get involved.

It wasn’t the first time Rhiannon had not been able to cough up on time, but my mum was sympathetic. ‘Don’t worry, just get it to me when you can,’ she told her. ‘If she ever leaves, we would move in in a heartbeat,’ I had always said. After Rhiannon had finally said she was leaving, mum told me I could have the house. Knowing I would take care of it, she decided to spruce it up. ‘It will look as good as new with a lick of paint,’ she chirped, flicking through colour charts.

Two weeks later though and after hearing I would be replacing her, Rhiannon changed her mind and tried to take back her notice. ‘I’m sorry but you’ve already given it to me and I’ve promised it to Toni now,’ mum said. Storming off huffing and puffing, Rhiannon was fuming. But mum stood her ground. ‘I’ve had enough of her,’ she groaned, glad Rhiannon would soon be out of her hair. We thought that would be the end of it, but one Sunday we all gathered at mums for lunch. 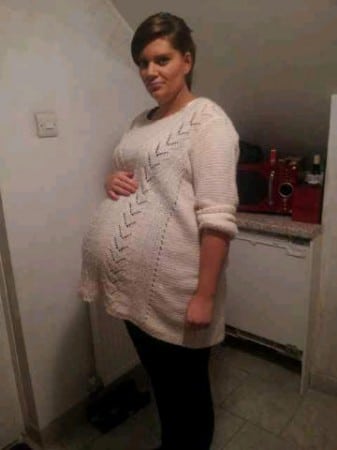 Pregnant Toni was worried she had lost the baby

My older brother, Craig, and his partner, Melissa, joined us and we sat down to a roast dinner. Just as we were tucking in, there was a thud outside and fits of giggles. ‘What was that?’ I asked, just as puzzled as everyone else. Dashing over to the window, there were more splats before I noticed Rhiannon’s eldest two girls making a run for it. Eggs were running down the outside walls.

Craig, Melissa and my dad, Calvin, 55, ran out to catch Rhiannon’s daughters in the act, but they sprinted to the park. Before long mum and I heard screams and Craig ran up to us shouting: ‘They’ve got Melissa.’ The teens had thrown stones at my poor dad and started on Melissa. Her face was a state.

Luckily the police had already been called and managed to drag them off her. Rhiannon had shown up and was effing and blinding, while being held back. It was clear she was a nasty piece of work and I knew to stay out of her way. From then on she had it in for my family. She followed me up the street one day when I left my mum’s house, swearing as her toddler tottered behind her.

‘Put him down, I’ll have you,’ she spat after me. ‘I’ll be done for murder now,’ she joked, referring to my unborn baby. I was disgusted and covered Connor’s ears as I frantically made my way home. That evening Craig dropped me off for my shift at the fish and chip shop. One of Rhiannon’s children came in and bought some chips, before leaving on their mobile phone.

I worried she was calling her mum to let her know I was working, but I pushed any niggles I had to the back of my mind – forcing myself not to be silly. But when I left at 8.30pm, I spotted Rhiannon at the end of the road. I didn’t want any trouble so I put my head down and walked on, but Rhiannon stormed up to me. After her threats that morning I was frightened of what she might do so I grabbed my phone and my hands shaking I called my mum.

Officers were at her house taking a statement from her after the trouble, so within minutes they were on the scene, but not before Rhiannon violently lashed out at me. ‘I’ll kick the baby out of you!’ she screamed, hurling heavy punches at me. She kicked me to the ground, pinning me there as she stamped on my head. Sobbing in agony, I begged her to stop and to think of my unborn child. Slapping me, she snarled: ‘I don’t care. I’ll kill it. I’ll kick it out of you now.’

Police prised her off of me and bundled me in their car for safety. I could barely breath I was in such a state – terrified that I might have lost the baby. I was taken to hospital on a stretcher in an ambulance to be checked over. There was blood pouring out of my head from where Rhiannon had stamped on it. I had cuts and bruises all over my arms, where she had dragged me across the concrete. My hair had been ripped out in clumps and I needed an x-ray of my jaw to check it wasn’t broken.

Sharp pains twinged in my stomach and I instinctively clutched my barely visible bump. Unable to have a scan there and then I paid to have a private one before my routine 12-week one was due. I breathed a sigh of relief when the sonographer told me the baby was fine, but throughout the rest of my pregnancy I panicked whenever I had the slightest twitch.

At Merthyr Tydfil Crown Court, Rhiannon admitted assault occasioning actual bodily harm and was handed an 18-month community order with supervision and an alcohol activity requirement. The judge told her: ‘It was more by luck than judgement after you had kicked, slapped and punched her that she did not sustain more serious injuries. ‘Your attack could have put at risk the life of that unborn child. One can only imagine the grief that would have brought. If there is any trouble between you and the neighbours you should contact the police and not resort to jungle justice again.’

Rhiannon was also made the subject of a three-year restraining order not to go to the area and not to contact me or my family. She also had to pay a £60 victim surcharge. I was relieved but until I cradled my baby in my arms I knew I wouldn’t feel totally at peace. 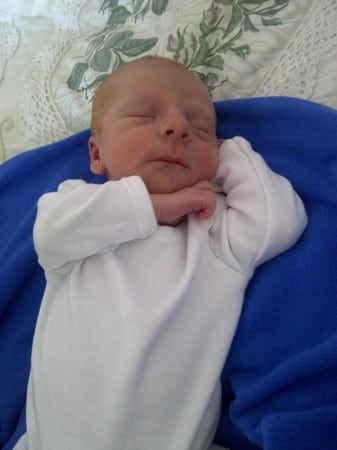 Jacob was born a healthy 7lb 5oz after being induced

On Monday 9th December, I was induced and I gave birth to a healthy baby boy, named Jacob, on Tuesday 10th December. Weighing 7lbs 5oz, he arrived on Connor’s birthday and his big brother couldn’t have been any prouder. I felt like the luckiest mum alive – especially after all I had been through. I know it could have easily been a very different story.
ENDS
Have you been the victim of a crime?  Have you been in a feud with a neighbour that has turned nasty?  Or, have you taken somebody to court and won?
We want to hear about it.  Tell your story and make money at the same time.  Just tell us a little bit about your story using the form on the right hand side of this page and we’ll get back to you if it sounds like something we could print.
To find out more about selling your story, see the Sell My Story page.