SellUsYourStory.com is part of the largest independent press agency in the UK.  We help hundreds of people share their stories. This week brave Alissa Moore, 52, waived her anonymity to speak out against the horrific historical sexual abuse she endured for ten years at the hands of her dad – while her mum looked on.

If you have been the victim of rape, current or historical sexual abuse or domestic violence, please contact our team today using the story valuation form on this page.  Our trained writers help hundreds of people every year share their stories to help those living through a similar situation.  Your story really can have an impact on other people’s lives.

I was seven years old, and about to become a big sister again. I couldn’t wait to have a little baby to play with. My little sister, five, was sounds asleep next to me in bed, a smile playing on her lips.

We were inseparable as we were both petrified of our dad Dad James, 32.

Sometimes, he’d push my Mum Joan, 27, or grab her arm so hard that it bruised. She acted as if it was normal. Then one evening, my Mum disappeared. I heard footsteps approach on the stairs. Dad slowly pushed the door open and grabbed my arm. I wished my sister was awake to help me.

His yellowing teeth formed a grin that left me stiff with fear. I had seen him grinning at Mum just like that, when he wanted to get his own way, or she did something he didn’t like.

He always lost his temper at anything and just hit out, so I didn’t struggle. He led me out of my bedroom and downstairs into the sitting room, and his rasping breath made my skin crawl.

Then he sat on the sofa and said, ‘Lift up your nightie, now.’ Scared stiff and confused, I did as he said. With his grubby fingers he started touching me. I was like a puppet as he took my hands and made me touch him.

Next he laid me on the sitting room floor and forced himself inside me. ‘Agh,’ I whimpered. The pain was excruciating. ‘Shut up,’ he snarled as I cried. I stared at the cracks in the ceiling for what felt like hours.

Is this what all daddies do with their little girls? I thought about my mum and hoped that she would run in the room to come and save me. But she didn’t.

‘Go to bed now,’ Dad barked when it was over. I cried myself to sleep, confused and in pain.

Next day, Mum came home from hospital with a baby girl in her arms. But I just felt numb. When we were alone in the kitchen, I tugged at her skirt. I blurted out: ‘Daddy hurt me.’

She stopped dead and slowly turned around with a look of shock. Shock quickly turned to disgust. ‘Go away, just shut up and stop it,’ she said.

My eyes filled with hot tears. Then I heard familiar footsteps outside the kitchen. Dad. He threw me to the kitchen floor and started raining blows all over my body. I felt my legs and ribs exploding in pain.

Leaving me battered and bruised on the carpet, he stormed out.

How did he know? Did Mum tell him? Looking up, I saw her watching me whimper on the carpet. She’d seen it all.

‘Shush, stop it will you?’ she tutted, turning her back on me. I couldn’t believe it. I felt so alone. How could my own mum let this happen?

I couldn’t go to school for weeks as my face was so swollen with bruises, and my body hurt from the beatings. I could hardly open my eyes as they were so swollen. After that, Dad raped me every week.

He’d come into my room at night and put his hand over my mouth to stop my screams. I’d fill with dread and fear when I heard the sounds of his heavy steps on the stairs and the creak of my bedroom door opening.

‘If you tell anyone, I’ll kidnap you and we’ll run away together, just the two of us,’ he threatened. ‘You’ll never see your mum or sisters again.’

Mum continued to turn a blind eye to my scratches and bruises from Dad. She acted like everything was normal.

When we all went out to the shops together, I would hold my sister’s hand and we would smile politely at our neighbours.

‘How on earth are your children so well behaved? You must tell me your secret!’ the neighbours joked to my parents. If only they knew my secret.

Dad continued to rape me every week. I was too scared to tell anyone at school, so I grew more and more isolated.

Then, when I was 15, I got my period. ‘That means you can get pregnant,’ a classmate said at school. I felt sick at the thought.

So next time Dad crept into my room, I snapped. ‘No!’ I yelled. ‘Stop!’ From that moment on he didn’t touch me again. I wondered if he knew I could get pregnant.

His verbal abuse continued though, and a year later I finally decided that I had to run away. I couldn’t go on like this.

I started cramming as much as I could into a bag – socks, knickers, and toothbrush. I froze, hearing Dad come up the stairs. He opened the door but I barged past him. Dashing out of the house I just kept on running, until I couldn’t breathe.

I spent two nights sleeping rough. After that I went from sofa to sofa, staying with friends and my auntie, refusing to tell them what had happened. They just thought I was troubled.

Then when I was 20, I met my boyfriend Paul through friends. He was kind and gentle – I’d finally found someone I could trust. We had a perfect whirlwind romance. We had a daughter after a year of being together, then got married two years later.

I received counselling for my trauma and had gotten used to shutting off the first two decades of my life. I was working in childcare, which was my dream career.

Then, one day, social services came into work to talk about child abuse. As they read out a case study of a sexual abuse victim, I felt like it was my story they were telling. The memories came flooding back. That night, I came clean to Paul about my past.

‘I was sexually abused by my father,’ I said tearfully. He was livid, and I had to stop him going after Dad.

‘I just want to move on,’ I said, shaking my head.

But I couldn’t get past it. I arranged to meet with my sister. We’d stayed close, but I’d never told her the truth.

‘No!’ I gasped. I’d had no idea. My poor little sister. I’d left her in the hands of a monster. We cried and hugged. Neither of us wanted to go to the police. We wanted to forget and move on.

Only, soon after, I was in Tesco when I spotted Mum. As I approached her, my heart thumped as Dad suddenly stepped into view. I felt like I was seven again as I stiffened with fear and my words caught in my throat. Bile rising, I dropped my basket and fled. He was pure evil.

I tried to move on as by this time I had another daughter. I just wanted to live a normal family life, like the one I didn’t have.

Then, one day, a policewoman knocked at my door. ‘We’ve had a report of attempted sexual assault from a young woman at the hands of your father,’ she said. I felt sick. ‘I’ve nothing to add to the investigation,’ I said, closing the door.

It took another three times of police knocking on my door before I finally broke down and told the whole truth. ‘This is your chance to get justice for what you’ve been through,’ the policewoman encouraged.

I agreed to make a statement. It was the first time I’d gone into detail about what happened, and it was traumatic.

In time, James O’Brien appeared at Aylesbury Crown Court. Me and Denise gave evidence via video link, revealing how he’d abused us. And how Mum did nothing to stop it.

Our Mum, Joan O’Brien, 70, was sentenced to six years for failing to stop the abuse my sister and I faced.

Dad, 75, was sentenced to 24 years in prison for a string of historic sexual abuse offences between 1972 and 1982 – including six counts of rape and three counts of indecent assault.

But it’s not enough. Dad got to live his entire life and he will probably die before he serves even half of his sentence. I’ve never had the chance to live my life without fear or dread.

What’s worse is because I lived under the same roof as my abuser and my ordeal stopped before 1979, I won’t be receiving any compensation from the government. It’s not the money I care about. It’s the principle. I will not stop campaigning for justice for historic sexual abuse victims.

I was betrayed in the worst way by both my mum and dad. I wouldn’t wish that on my worst enemy. Now, I want to urge any other victims of sexual abuse to come forward as soon as possible. Don’t let these monsters get away with it.

We helped Alissa sell her story exclusively to That’s Life Magazine, who outbid rival magazines for the rights to print Alissa’s story.  If you would like us to auction your story to the highest bidding magazine, get in touch using the story valuation form on this page.

For more information you can read our Sell My Story page, which explains the process of selling your story in more detail, or you can contact us here. 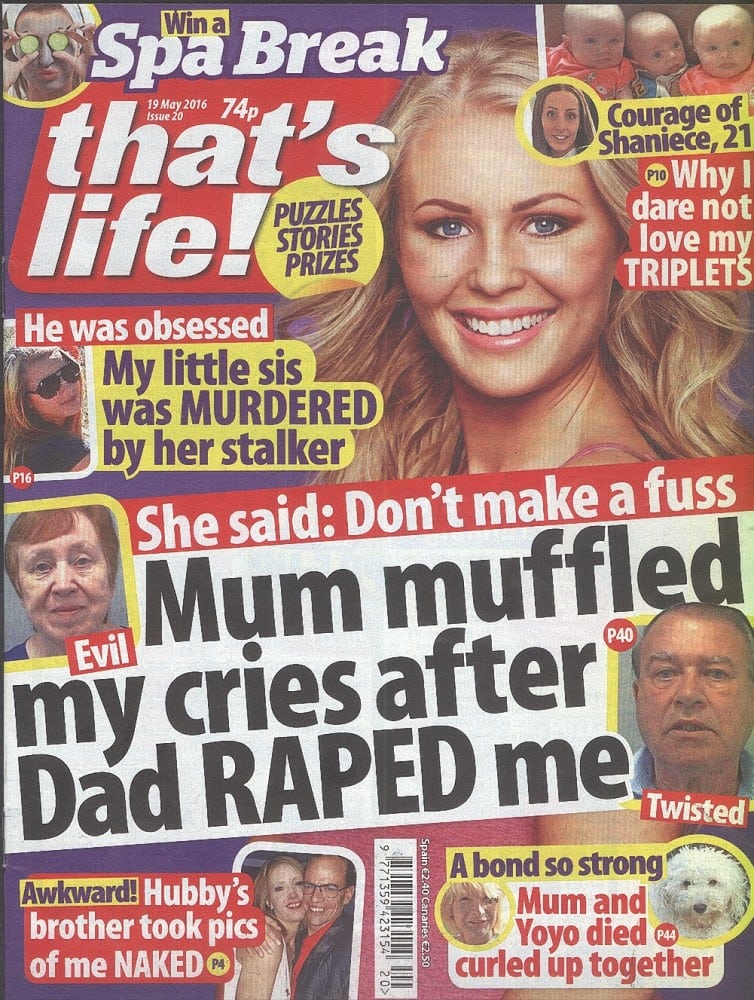