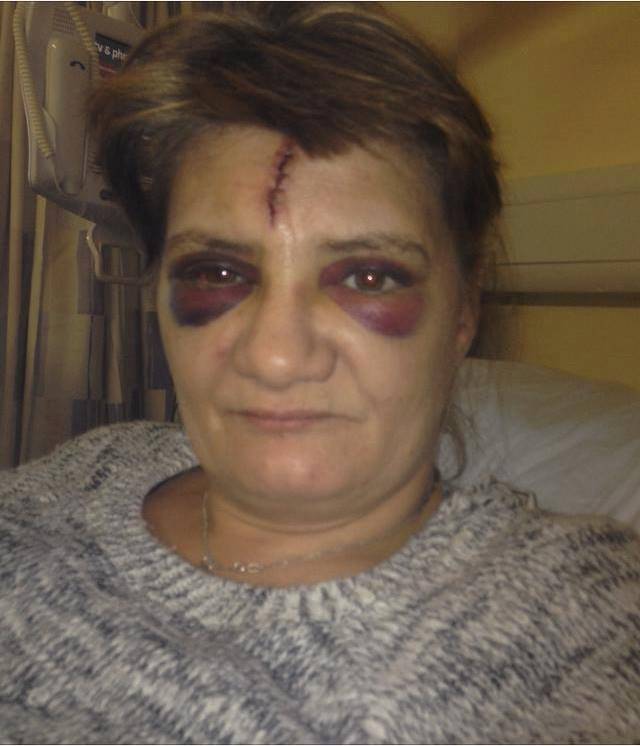 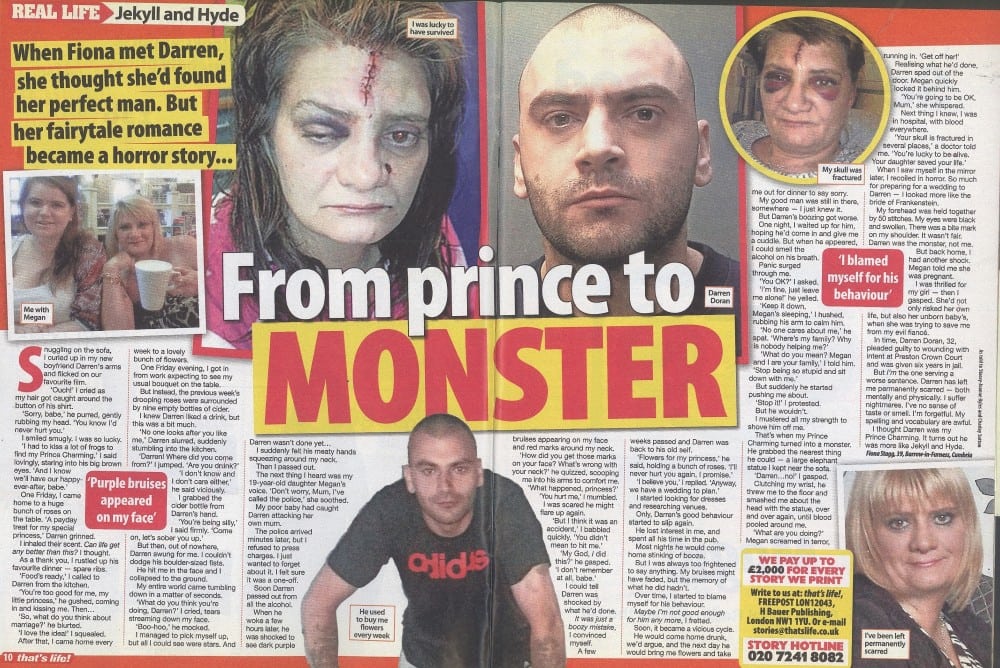 We helped our client Fiona Stagg share her domestic violence story with a magazine.  Read Fiona’s story ‘What happened when I gave domestic abuser a second chance after he drunkenly beat me…’

We were snuggling on the sofa, cosy with a duvet in each other’s arms watching An Officer and a Gentleman, our favourite film. We never left the house over winter. We were always together like best friends.

‘Ouch,’ I yelled as my hair got caught in the button of his shirt. Aww I’m 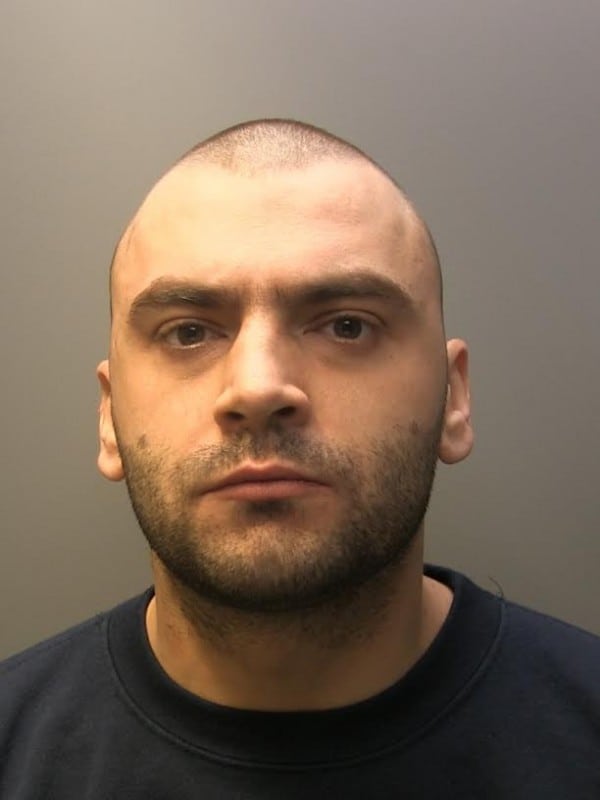 sorry babe, you know I’d never hurt you,’ said Darren. He softly rubbed my head until the pain went away. I felt safe with him, he was my hero. From the day we met we had a connection. It was June of last year and I was in the smoking area at work grabbing some fresh air. ‘Hardly fresh air out here.’ Darren joked.

He must have noticed I didn’t have a cigarette and was as far away from the smoking fumes as possible. How attentive, I thought. I giggled like a little school girl. There was something about Darren and I was immediately infatuated by him. Darren and I just clicked: our interests were so similar it seemed unreal. ‘I think you’re pretty great.’ he said to me, putting his huge arm around my shoulders. 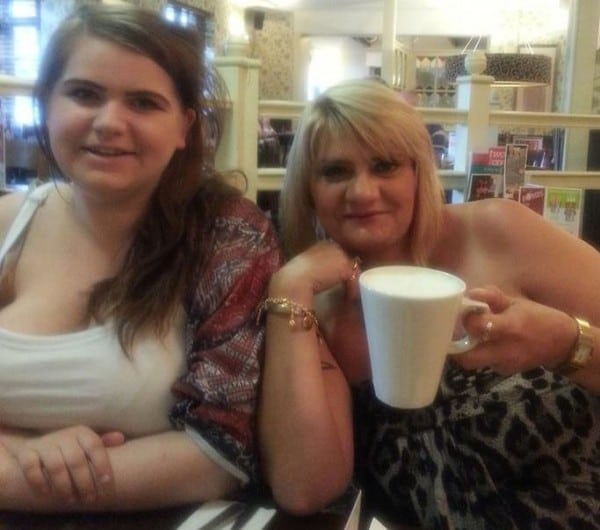 I looked down at the floor, my face was flushed. We had only been seeing each other for a few weeks. After getting over a 14 year marriage, I wasn’t looking for anything from anyone, but Darren charmed his way into my heart and laughed himself into my bed. He was my fresh start in life. Darren moved in with me, I couldn’t believe it. Our romance went from strength to strength and eventually I had finally found my prince charming. ‘I had to kiss a lot of frogs to find my prince charming,’ I said lovingly staring into his big brown eyes, ‘I know we will have our happy ever after babe.’

Every Friday, I would come home to a huge bunch of roses on the table. ‘A pay day treat for my princess,’ he said. I grinned and put the roses up to my nose inhaling the sweet scent. ‘Could life really get much better than this,’ I whispered to myself. Cooking up a storm in the kitchen, I eagerly shouted, ‘food’s done. It’s your favourite: spare ribs.’ ‘You’re too good for me, my little princess.’ He leant over and kissed me on my forehead and told me he loved me.

‘What do you think of children?’ He said inquisitively, ‘What do you think about marriage?’ My legs weakened and my knees buckle, ‘I love the idea.’ I screamed.I could barely contain my excitement and the grin on my face wasn’t going away anytime soon. ‘You guys are so cute, I’m so happy for you, mum.’ Megan came running over to give us a hug, ‘I love you Darren.’ Megan said.A happy little family.

One evening, opening the door to our home, pay day! I thought to myself. ‘Hmmm.’ I mumbled, there was no Darren and no red roses. Instead there were nine large empty bottles of cider, just lying there around last week’s roses. I knew Darren liked a drink, but this was extreme. ‘No one looks after you like me.’ said Darren stumbling around the kitchen. ‘Oh Darren where did you come from? Are you drunk?

‘I don’t know and I don’t care either.’ He said viciously. I grabbed the cider bottle from Darren’s hand and told him he was being silly and needed to sober up. Suddenly, his mood changed. Out of nowhere, Darren swung for me. I couldn’t avoid his large swinging arms or his boulder-sized fists. He hit me in the face and I collapsed to the ground. My entire world came tumbling down in a matter of seconds. I was devastated. ‘What do you think you’re doing, Darren?’ I said teary-eyed and in shock, mumbling through the pain. He mocked me weeping.

‘Aww boohoo,’ he said. I managed to pick myself up of the floor. I could see stars. All I can remember is seeing his giant hands go for me again as they welded shut around my neck. I passed out. Megan had phoned the police. She came down the stairs just in time to catch Darren’s hands clutching my throat. ‘I have called the police mum, they’re on their way.’ Darren passed out from all the alcohol,

When he awoke a few hours later he was shocked to see my face bruised and my marked neck. ‘How did you get those marks on your face? And what’s wrong with your neck?’ He said. Darren was so confused and worried, he tried to scoop me into his arms and comfort me. ‘What happened princess?’ He whispered. ‘I think it was an accident,’ I said fearfully. ‘You didn’t mean to hit me.’ I said quickly, so he wouldn’t get angry again. ‘I don’t remember.’ He said.

Darren was shocked to learn he hit and strangled me, I knew it was an accident. I dropped all charges the police wanted to press. It was totally out of his character. I felt sure it would never happen again. A few weeks passed and Darren was back to his old self. ‘Flowers for my princess,’ he said, holding a bunch of roses. ‘Come here you.’ He held me so tight, I melted into his arms and felt safe again.

I knew the attack was a one off. My face wasn’t so bad and the marks on my neck were fading. ‘I will never hurt you again babe, I promise.’ ‘Of course I believe you, now. Anyway we have a wedding to plan.’ I managed to get my grin back. But Darren’s demeanour had changed since the attack. Aside from the flowers he bought me days after the incident, he was becoming less interested in me and more interested in alcohol. He would come back most nights, smelling of alcohol and after shave to cover his stench. 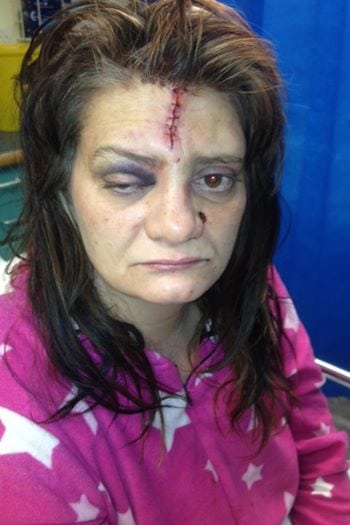 In January, I gave Darren some money to put on the electric metre and the gas. He was gone most of evening and I was really worried. He came back drunk and had put no money on the electric or gas metre. I didn’t want to confront him about it, as I was scared he would react like before. Beforehand, I could tell Darren everything but felt as if I was walking on egg shells now. Something felt different.

He would come home drunk most nights. I didn’t understand, and at times blamed myself. But the next day he would bring me flowers and take me out for food. He would hug and kiss me and tell me he loved me and I would forget about his drinking until next time. Then we would argue again, and he would scare me. Darren would bring me more roses and take me out for drinks and hold me tight in his arms, once again.

My prince was still in there, somewhere, I just knew it. I heard the key go into the front door. Darren’s late, I thought. I waited on the sofa hoping for him to give me a big cuddle. I could smell the stench of alcohol on his breath and he was stumbling again.  I sat up on the sofa, I was nervous, my palms were sweating.

‘What’s wrong Darren? Are you okay?’ I asked calmly. ‘I’m fine, just leave me alone.’ He raised his voice so loud it hurt my ears. I knew Megan was upstairs asleep, ‘Keep the noise down, people are sleeping.’ I said while rubbing his arm up and down to comfort him. ‘No one cares about me. Where’s my family, and why is nobody helping me?’ Darren said, aggressively. ‘What do you mean? Me and Megan are your family. Stop being so stupid Darren and sit down with me.’ I said.

But he was becoming ever more aggressive and he started to shove me. I told him to stop but he wouldn’t, the stench of alcohol was over powering. ‘STOP.’ I demanded, and shoved his large body off me with all my strength. He saw red and he just lost it. My happily ever after was turning into a horror story and Darren was playing the part of a monster. He grabbed the nearest thing he could: a large ornamental elephant statue I kept on the floor near the sofa. 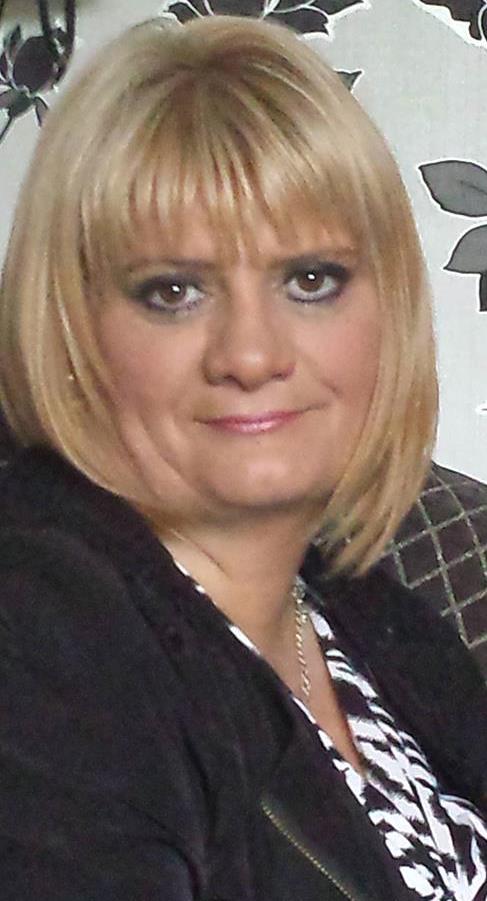 Clutching me by the wrist, he threw me to the ground and smashed me around the head with it 5 times. Megan came running down the stairs once again to my rescue and stopped Darren delivering the final blow to my head which would have killed me. ‘What are you doing!?’ Megan screamed in terror as I was lying in a pool of blood. Darren raised his hand to hit my daughter.

She screwed her body up tight to take a hit but Darren ran away before hitting her and Megan quickly locked the door and rang the police. ‘Coward!’ Megan screamed after him.  The next thing I knew, I woke up in an ambulance, blood everywhere. If it wasn’t for Megan, who came running down the stairs when she heard him beating me, he would have killed me. ‘Why is there blood everywhere? What happened?’ I slurred my words as I asked the paramedic what was going on.

‘Remain still please Ms Stagg.’ ‘Your fiancé has fractured your skull in several places, it needs serious attention, you’re lucky to be alive,’ said the doctor. ‘It looks like your daughter saved your life.’ I looked like a monster, my forehead, which Darren used to kiss, was split in half and needed over 50 stiches. My eyes were black and swollen and there was a bite mark on my shoulder. I left the hospital in such a state. I would hear people gasping and muttering things about me. ‘It’s okay mum.’ Megan was so reassuring. She was so brave.

I felt monstrous. “I overheard one person call me Frankenstein’s monster.” Darren has left me permanent damaged, not only physically but mentally. I have nightmares. I forget what I’m saying mid-sentence. I have no taste or no smell, eating’s just pointless and my spelling and vocabulary have dissipated. My memory isn’t very good and I can’t remember my pin numbers and how to do simple tasks. I couldn’t believe it when I found out that Darren had an additional 75 previous offences under his belt.

We had planned a life together, to go holiday, to get married and have children. I thought I would never be able to get over what Darren did to me. ‘I’m not letting anyone bring me down.’ I said, with my head held high. I have taken out a restraining order against Darren, and he’s serving six years in jail after being found guilty of wounding with intent at Preston Crown Court. Luckily he pleaded guilty, which saved me and Megan having to give evidence in court. It looks like he was just another frog I had to kiss before I find my real prince charming.

Have you been affected by a similar issue and are thinking of sharing your story with a magazine to help those in a similar situation?  SWNS is the largest press agency in the UK and are experts in helping you tell your story, your way.  We also guarantee to get you the highest fee for yourself or a charity of your choice.

To learn more about selling a story to the press, see our Sell My Story page.

You can also see a selection of domestic violence and abuse stories that our brave clients have shared with others here: https://www.sellusyourstory.com/news/category/domestic-violence-abuse/