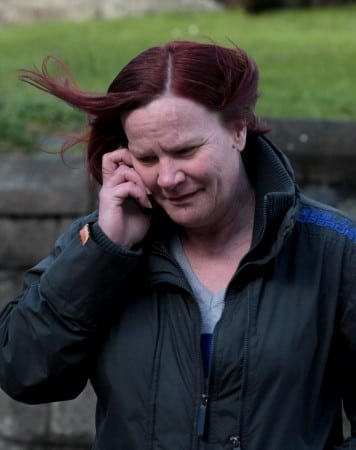 Ann, 50, didn’t like her brother David’s young fiancé so in a bid to stop them tying the knot she impersonated her and cancelled their wedding.

Despite introducing them, sneaky Ann wanted to stop David, 52, getting hitched to her former friend, Sandra, 28, so without the couple’s knowledge, Ann called the registry office pretending to be her future sister-in-law. She told officials to scrap plans for the big day and then rang her brother and said: ‘I’ve saved you on the divorce. I’ve cancelled the wedding. Would you like the confirmation email?’

Luckily devious Ann failed to wreck her brother’s nuptials and he and Sandra married 20 days later as planned after reinstating the booking.

After her failed attempt, Ann even turned up at the registry office to shower the newlyweds with abuse as they left as husband and wife. But her actions landed her in trouble with the law when the furious pair reported Ann to police.

At court, Ann admitted a charge of harassment and insisted she still doesn’t approve of her new sister-in-law. While Sandra and David have said they will never forgive Ann. 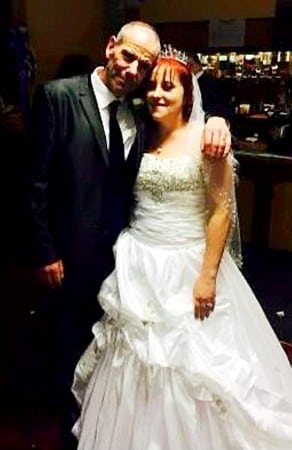 My partner, David, 52, was at his job as a labourer when I plucked up the courage to give him a call on his lunch break and get something off my chest. ‘I think we should get married,’ I blurted out, before I had the chance to change my mind. There was silence at the end of the line, before David finally got over the shock and replied: ‘OK.’

It was far from romantic and might have seemed mad – we had only known each other for three months – but I knew he was ‘the one’ so I thought ‘why wait?’ We started making plans straight away and David took me shopping for an engagement ring.

That evening he treated me to a slap-up meal before getting down on one knee to pop the question properly. With the sparkler on my finger, I couldn’t have been any happier. But not everyone was as thrilled about our news.

David’s sister and my former friend, Ann Duffy, 50, was livid. From day one she made it clear she did not approve of me and vowed to stop me marrying her brother. She was constantly calling David and ranting down the phone. ‘Sandra’s no good for you. She only wants you for your money,’ Ann would spit, in an attempt to drive a wedge between David and I.

Every time she rang and bombarded us with a barrage of abuse I would be left in floods of tears, questioning why she hated me so much. It was Ann who introduced us after all.

I had been at the pub with Ann when she invited David along to join us for a drink, in July, 2012. David was tall, dark and handsome and we got on like a house on fire, despite the 24 year age gap. That evening we swapped numbers and the next day I agreed to meet David for a coffee in our hometown of Plymouth, Devon.

From that moment on we had become inseparable. Our romance was more of a hurricane than a whirlwind. Within three weeks I had moved into David’s place. My flat had been under renovation and after showing David around he insisted that I come and stay with him until the work had been carried out. I stayed at his for two-and-a-half months before asking him to live with me in my flat. I met his kids from a previous relationship and we got on well too.

I had never knowingly done anything to offend Ann and I just didn’t understand why she couldn’t just be happy for us – or at least civil. When David and Ann’s mum, Cecelia, 78, developed dementia, David didn’t want her going into a care home. ‘She can live with us,’ I told him. I had lost my mum, Linda, 58, to cancer in May, 2013, just six months before the wedding and it had hit me hard. Mum had helped me pick my dress online and she had secretly bought it for me, but it broke my heart that she never had the chance to see me in it.

David had been my tower of strength throughout losing her and now it was my turn to support him. In August, 2013, Cecelia moved in and I became her carer, looking after her 24/7 – showering her, dressing her and cooking her meals. It was tough, but I knew if the tables were turned he would have done the same.

‘You’re taking my brother and my mother away from me,’ Ann snarled nastily, one day during another of her rages. ‘Don’t be ridiculous,’ David told her. ‘She’s not done anything wrong.’ ‘She can’t pretend our mum is her mum,’ Ann shot back. She had really touched a nerve. Now she begrudged me for only trying to help the family. It seemed no matter what I did it was wrong in Ann’s eyes.

David worked 12-hour days while I was at home caring for Cecelia. ‘She’s just jealous. She must feel threatened by you,’ David said, reassuringly, wrapping his arms around me. With David’s long hours and looking after Cecelia we were exhausted and the wedding was put on the back burner.

I demanded Ann never come to our home after the way she spoke about me. David agreed and he arranged to take Cecelia out to meet with Ann, but she rarely showed up and was always making excuses. So at the start of November, 2013, when Ann took her mum out for the day we were surprised she was making the effort. She offered for Cecelia to come and stay with her daughter, Kelly, for a fortnight to give us some respite, we were shocked at the gesture but grateful. 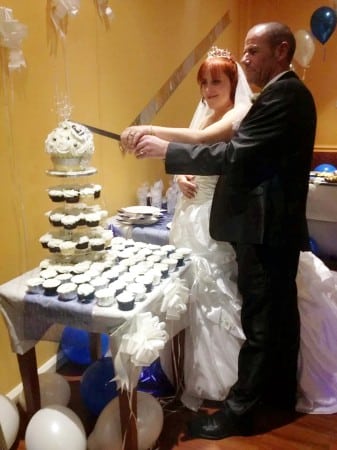 The care Cecelia needed was demanding and although we loved her, a break was just what we needed. ‘It’ll give us a chance to get the wedding plans back in motion,’ David said excitedly. We had already made a good start. With the registry office booked, invites posted and the arrival of my bridal gown, the countdown to our big day had officially begun.

We chose a royal blue colour scheme in keeping with David’s favourite football team – Chelsea – and my brother David set about making up a cake. ‘It won’t be long before you’re Mrs Greatrex,’ David said, beaming from ear to ear. But even with the date fast approaching, Ann wouldn’t give up. ‘I’ll get him away from you,’ she insisted.

By now I had learnt to just ignore her. I knew David loved me, and his bitter sister wasn’t going to come between us. Then we found out Cecelia wouldn’t be coming back to live with us, Ann had arranged for her to live with Kelly full-time and she planned on keeping her away from me.

David and I had bought Cecelia a new outfit for the wedding, but Ann wouldn’t let her come. We were both distraught, but we were determined not to stoop to Ann’s level. Then on Tuesday 5th November, 2013, just as we were climbing into bed, David’s mobile rang. ‘Not her again,’ I sighed, sick of Ann’s relentless abuse. ‘You better put me on speaker phone,’ I heard her bellow down the line. David refused, but it didn’t matter, I could hear every word she said.

‘I have saved you on the divorce. I have cancelled your wedding,’ Ann announced, smugly. ‘Would you like me to send you the confirmation email?’ My jaw dropped and David remained calm. ‘That’s fine, I’ll call them back in the morning to re-book,’ he said, hanging up on Ann.

‘I know she hates me, but she wouldn’t go that far, would she?’ I sobbed. We were due to tie the knot in just 20 days’ time, now it might not even be going ahead. It was 10pm and too late to call the registry office and check what Ann was saying wasn’t some sort of sick joke, so we spent the night pacing back and forth and full of worry.

My brother, David, 29, had really helped us out with the costs of the wedding, along with the rest of our families, I was adamant that all the help and effort of our nearest and dearest would now have been wasted.

After a sleepless night, we called the office as soon as it opened. ‘I’m afraid there’s nothing booked in on November 25th,’ the woman at the other end said. My heart sank in my chest. ‘How could Ann do this to us?’ I cried hysterically. I knew how devious she could be but even I was shocked by her latest stunt.

‘It’s all been paid for,’ David explained. ‘But my sister rang yesterday to say she had cancelled it.’ Eventually the lady found the cancellation list and luckily there was a record of it. We discovered Ann had taken matters into her own hands and sneakily impersonated me to scrap plans for our nuptials.

Luckily she failed to scrap the ceremony completely and we were able to reinstate the booking. Although I was upset by Ann’s actions, I was determined not to let her taint it for us. Furious and at our wit’s end, we reported Ann to the police.

When our wedding day rolled around I felt like the luckiest woman alive as I walked down the aisle to wed David. Despite the fact Cecelia couldn’t be there, the day was perfect and went ahead as planned and our 50 guests who attended the service were none the wiser until Ann showed up to voice her disgust.

Even though she had never been invited, she tried to spoil it by turning up and showering us with abuse as we got into the car to be driven to the reception. She made rude gestured with her hands and stood there effing and blinding. Ann shouted ‘commiserations’ as we left. But I just turned to David and smiled. We had just become husband and wife and there was nothing she could do to stop us.

In time Ann appeared at Plymouth Magistrates Court where she admitted a charge of harassment, but she made it clear she still didn’t approve of our marriage. She said she had cancelled our big day to cause me distress, but not to upset David.

We will never forgive Ann for trying to ruin our big day. Ann did her best to stop us from getting hitched but all she has done is bring David and I closer. We are stronger than ever now after all Ann put us through, so her plan backfired.

David said: ‘From the very start she didn’t like me and Sandra being together. ‘She was really jealous, she kept accusing Sandra of trying to take her brother away. When I told her we were getting married she told me I was making a terrible decision.’ She said ‘It’s not going to happen, I’ll make sure of that – blood is thicker than water.’

‘The relationship between me and Ann was never really good after that. We rarely spoke. But I never thought she would cancel her own brother’s wedding. Neither of us will ever forgive her.’ 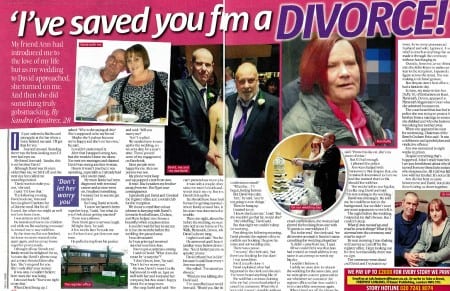 If you have a wedding disaster story you’d like to sell to a magazine, just let us know about it by filling out the form on the right hand side of this page. We’ll won’t use anything without your express permission, but one of our writers will let you know how much it’s worth.

Or if you’d like to know more about the story selling process, read the Sell My Story page.