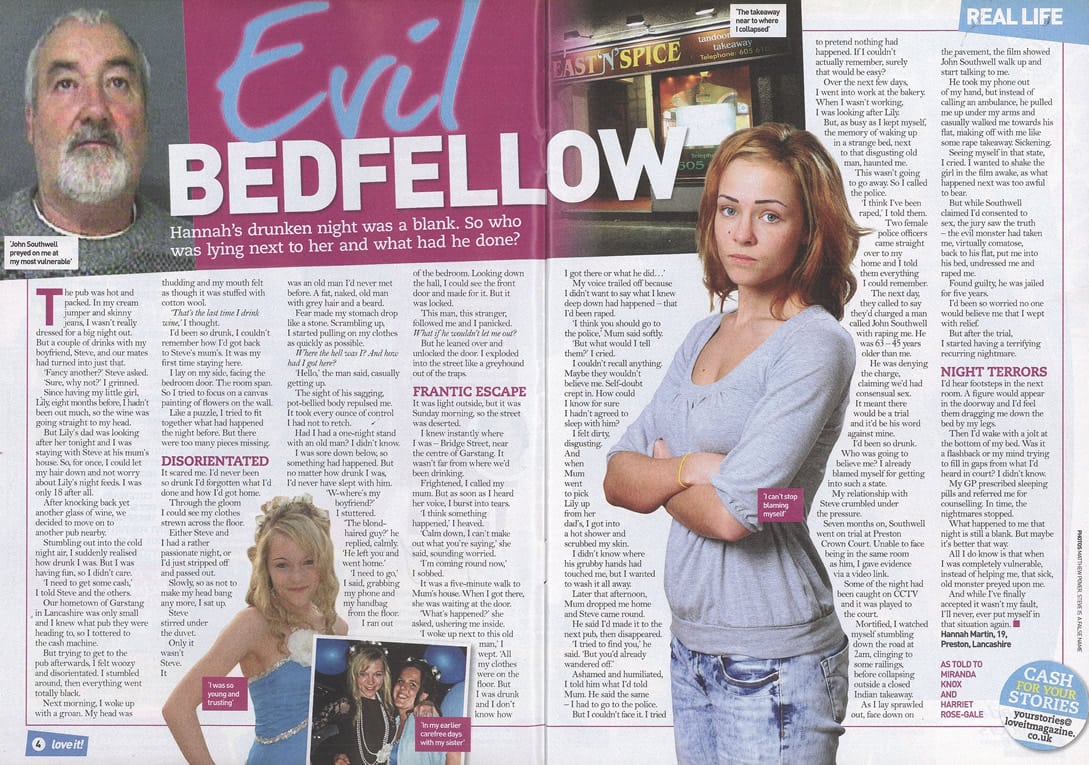 MOST 18-YEAR-OLD’S MAKE THE MOST OF THEIR NEW FOUND FREEDOM BY HITTING THE TOWN.

BUT ONE NIGHT CHANGED EVERYTHING FOR HANNAH, NOW 19, AND LEFT HER LIFE IN RUINS.

DURING A NIGHT OUT LAST YEAR SHE BECAME SEPARATED FROM HER BOYFRIEND AND FRIENDS.

PICKED UP OFF THE STREET BY A 63-YEAR-OLD MAN AND LED BACK TO HIS, SHE WAS STRIPPED AND RAPED WHILE SHE LAY UNCONSCIOUS.

– When Hannah was 18 she used to live for the weekends and loved going out and letting her hair down.

– Having not long got back with her boyfriend, Ben*, 24, after a whirlwind romance when they were younger, the couple decided to head into town with friends.

– The drinks were flowing and Hannah admits she had a few too many before she became separated from the group.

– She has little recollection of what happened next, but CCTV footage shows her slumped outside a takeaway trying to work her phone.

– 63-year-old John approached Hannah, in her vulnerable state, took her phone and walked her back to his.

– He took her straight to his bedroom, at the far end of the flat, and put her onto the bed before leaving the room.

– Hannah was asleep when he returned. But he continued to strip and rape her.

– When she awoke, Hannah thought she was at Ben’s parent’s house – where she was meant to be staying. She hadn’t been there before so didn’t recognise the room.

– But when she glanced over at who was beside her – expecting to see her boyfriend – she was absolutely horrified to see an OLD MAN.

– She left straight away while trying to piece together what had happened.

– Hannah said: “My world came out from underneath me. I looked over and he was laying there beside me.

– Distraught, she was completely naked and her clothes were everywhere. She scrambled to put them on and grabbed her phone.

– She said: “My phone had been turned off but hadn’t run out of battery. CCTV footage shows it lit up so he must have switched it off when he took it from me.

– “He could have called an ambulance, a taxi, anyone in my phone book, but he chose not to.

– “I was in a happy relationship. I would never have cheated on Ben – let alone with a man old enough to be my grandad – drunk or sober.

– “It didn’t add up. I was on my period. I wouldn’t have slept with my boyfriend, let alone a complete stranger.

– “I knew I’d been raped, although I was scared to report it because I knew it was my word against his.

– Hysterical, Hannah started walking to her mum’s and called her on the way. She said: “My mum couldn’t understand a word I was saying because I was in such a state.”

– Doubting herself and terrified to report him, incase others doubted her too, she didn’t know whether to go to the police.

– Hannah said: “I looked up the conviction rate for rape which was something like five per cent, so I was worried I would go through it all for nothing.

– Finally she plucked up the courage and he was convicted and sentenced this month to five years in jail.

– She added: “I know he won’t even serve the sentence and he has literally ruined my life.”

– Hannah and Ben broke up as they struggled to come to terms with what had happened.

– Hannah has had another relationship since, but it failed when the trial came up as it all got too much.

– She was too scared to leave the house at first and now has difficulty trusting anyone.

– She is terrified to go on a night out and steers clear of alcohol.

– Hannah said: “I’ll never go out and drink that much ever again. I never want to feel that lack of control or be unable look after myself.

– “I put myself in danger that night and something terrible happened. I can’t risk it happening again.

– “I’m now standoffish towards men. It feels like they’re waiting for me to get drunk so they can take advantage.

– “I know not all men are the same but I’ll never trust anyone in a pub or club, especially if alcohol is involved.

– “Even when I’m at the supermarket and see older men I feel a sense of repulsion towards them.

– “It’s unfair because they haven’t done anything, but it reminds me of the man that raped me and I feel physically sick.”

*Name has been changed 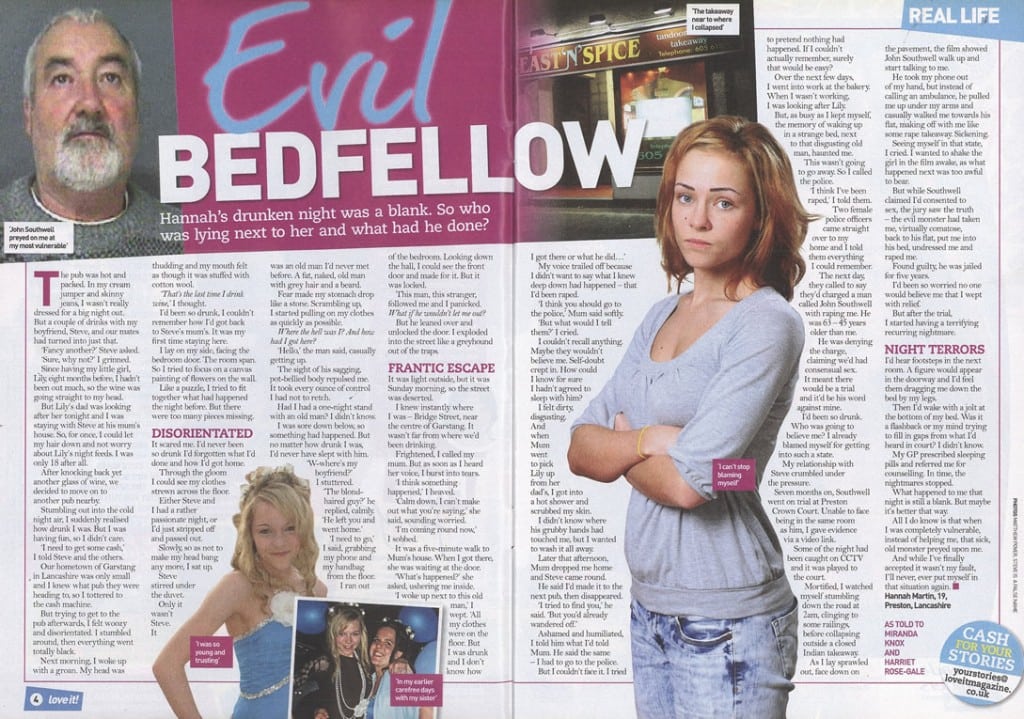