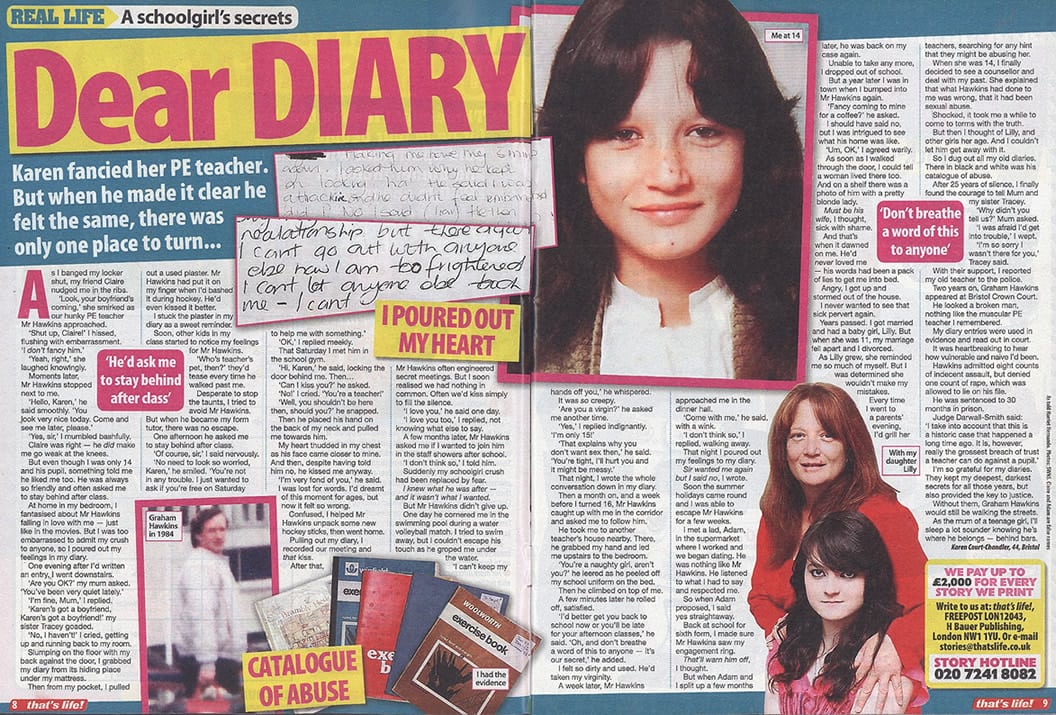 KAREN NEVER DISOBEYED PE TEACHER, GRAHAM, THEN 25, SO WHEN HE TOLD HER NOT TO TELL A SOUL, SHE KEPT HER PROMISE BUT SHE KEPT A SECRET DIARY DOCUMENTING THE ABUSE.

AFTER WATCHING HER LITTLE GIRL GROW UP AND WORRYING THAT THE SAME THING COULD HAPPEN TO HER, KAREN, NOW 44, FINALLY RETRIEVED THE DIARIES FROM A LOCKED CHEST IN HER ATTIC AND FACED HER ABUSER IN COURT.

Karen was 14 when her teacher started sexually abusing her. She didn’t tell anyone about the attacks, instead wrote detailed accounts of her encounters with the married man in a diary, which she kept hidden under her mattress.

The abuse began in 1983 when Graham offered to kiss her injured finger better and began showering her with compliments. On one occasion Graham kissed Karen in the gym and asked her to join him in the school showers. One diary entry – simply titled ‘The Big Day’ – described how Graham sexually touched her for the first time, telling her he “couldn’t keep his hands off her”.

On ‘The Big Day’, a week before Karen’s 16th birthday, Graham invited her back to his house. Graham, then 27, took Karen’s virginity, telling her he loved her and made her promise to keep their secret.

At the time, Karen had no idea Graham had a partner and no one knew of her hell. Karen tried to distance herself from Graham, but as part of his tutor group, it was impossible. She had to see him every single day and the girls in Karen’s class would tease her, calling her a ‘teacher’s pet’, as she ran around doing his chores.

When Karen got a boyfriend later that year, age 16, she got engaged in the hope that he would leave her alone. But he didn’t.

She finally escaped him, when she turned 18 and left school. But six months later she heard some friends gossiping about him. Graham had been asked to leave the school for sleeping with a pupil. Karen was heart-broken. She thought she was the only special one.

As Lillie approached her 14th birthday, the horror of what happened to Karen dawned on her. What if it happened Lillie? Karen went to the attic where the six diaries were kept in a locked chest and brought them down. She found the plaster buried in her diaries and she began to relive the horror all over again. For the first time, she realised that she had been taken advantage of.

She knew she had to tell the police and handed over the diaries, finally telling her mum and sister everything. Thirty years on and the diary was used to prosecute the teacher. Graham admitted eight charges of indecent assault against a minor, five in 1983 and a further three in 1984, in March 2012. He denied a single charge of rape, which was left to lie on his file.

The father was banned from teaching for 10 years and must sign the sex offenders register for 10 years. As the judge sent Graham down for 30 months, Karen was relieved that someone had listened to her and believed her.

After attending the court case, she said: “He believed me.” Karen says:

“Now that I’m grown-up with a young daughter of my own, I can see how Graham groomed me.

“At the time, I thought it was love, but what did I know about love when I was 14?

“Because he was my teacher, I felt like I couldn’t say no, even though I didn’t want to.

“For years I felt dirty, used and worthless – like I wasn’t worthy of being loved by someone genuine.

“Keeping the secret for such a long time took a heavy toll.

“It contributed to the break-up of my marriage in 2005.

“I couldn’t give my husband everything I wanted to because I did not feel worthy.

“I know I’m not the only girl he slept with – there are other girls out there who should come forward.

“What he did wasn’t right and I want to share my story to prevent this from happening to my daughters or any other young girls.