If you’re wondering ‘Will a magazine pay for my story?’ the answer is probably yes.  SellUsYourStory.com provide a free service to help you get the most money possible for your story.  It doesn’t have to be a gritty crime story, a love rat story, or even an extreme weight-loss story. Magazines are looking for all sorts of uplifting and heartwarming stories, or anything guaranteed to raise a smile.

Do you have an amazing pet story you’d like to share?  This week we helped Terrie Mitchell get paid for sharing her incredible pet story…  her family cat returned after 10 years of being missing!

We got Terrie an exclusive deal to publish her story in Real People magazine! To find out if you have a story to sell, use our no-obligation story valuation form on this page.

Return of the Cat

As I pulled up to the house I could barely contain my excitement. 21-years-old and getting a brand new kitten – I was over the moon.

I’d found the listing in the paper and somehow managed to convince my mum, Jean, 60, who I was living with at the time, to let us get a furry edition to the family.

We’d had cats in the past – Pikachu and Sophie – but both had been tragically knocked down by a car. It really put mum off getting anymore, but I wouldn’t let the subject go and eventually she relented.

‘Come in, come in!’ the seller beckoned at the door.

My heart melted when I saw all their little faces looking up at me from their basket.

‘Mum! How are we ever going to choo –‘ I began to ask, but I already knew.

‘That’s the one!’ I squealed, pointing to an adorable long-haired, black moggy.

‘That one, of course, the one looking at me!’ I told her.

She laughed, but I knew that the tiny kitten gazing up at me had fallen in love with me just as much as I had her. 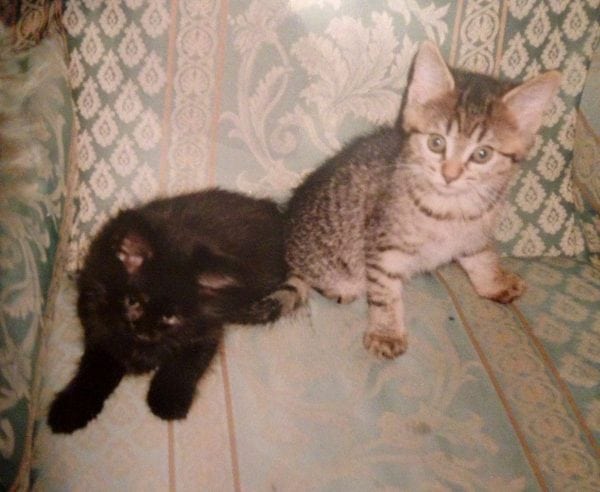 I stroked her soft head.

Then I noticed her little sister, Ellie, nuzzling up to her cheek.

‘Let’s get the pair of them mum, they’re clearly inseparable!’ I said cheekily.

It took no time all for the fluffy duo to settle in at home in Beighton, Sheffield. They were some of the sweetest cats we’d ever come across.

Two years flew by, and Chloe and Ellie had well and truly become part of the family.

‘Oh Mum, I don’t know what to do about Chloe and Ellie?’ I asked, packing up the last few boxes of my things.

Moving house with a cat

I was moving in with my partner, Matthew, 35, a few miles away and was uming and ahing about whether it was really fair to take Chloe and Ellie with us – they loved it at home with mum so much.

‘It’s up to you love, they are your cats after all, but you know they’re always welcome here,’ my mum said sympathetically.

It was a tough decision but in the end I decided it was only fair to leave Chloe and Ellie where they were. Not just for their sake, but for Mum’s too.

‘That’s the last of them then,’ Matthew called up the stairs.

‘I’m sure we’ve left something though…’ I called backed down.

‘Everyone feels like that when they’re moving – and anyway, if we have we’ll just pick it up,’ he reassured me.

We wouldn’t though, I knew what I’d left behind. Little Chloe and Ellie.

I soon came to my senses and enjoyed the next new chapter.

I still saw my mum, sister, Keeley, 29 and the cats all the time, and my new life with Matthew was going great.

Things were really looking up – then tragedy struck.

On mum’s 60th she was rushed into hospital. It came as such a shock, she’d been fine up until then.

‘It’s cancer,’ the doctors told us in the hospital waiting room.

It came out of nowhere and just three months later we were laying her to rest.

Keeley continued to look after the home after mum passed away. One day I came to visit and Chloe wasn’t there.

‘Not a peep…’ she responded, clearly worried.

We searched high and low and spent hours trying to track her down – calling her name and rattling a box of cat biscuits – but there was no sign of her. Before long I had given up hope, assuming Chloe had met the same fate as our previous two cats.

Over a decade later and I still thought of Chloe all the time, especially because I’d lost both her and mum at the same time.

Then one day I was scrolling through Facebook on my lunch break and couldn’t believe what I saw.

My heart was pounding out of my chest. Was this really happening? I never thought this day would come.

It sounds mad but the post showed a black cat with a missing eye – in Beighton of all places. It had to be her.

A postwoman, Andrea Hurst, had spotted my little Chloe sheltering in the wheelie bin while at work. On her next round she asked about Chloe and found out she’d been staying there for over six years. I try not to think about her out there all alone for so long, it breaks my heart.

We were reunited on November 5 last year – exactly two weeks before the anniversary of mum’s death. I even sprayed on the same perfume I wore back then, Clinique Happy.

Now Chloe’s been home over a month and she’s really settled in. It’s taken a while for her to get used to sharing with two other cats, but she’s really becoming part of the family again.

Will a magazine pay for my story?

SWNS is the largest press agency in the UK. We supply around 20% of all daily print news. We’re looking for new stories every single day. We’re not just looking for serious or breaking news stories. If you have an uplifting story you would like to sell to the national press, get in touch today.

Will a magazine pay for my story? Find out; You can contact us using the story valuation form on this page, or find other ways to contact us here: Contact SellUsYourStory.com

To find out more about how to sell a story to the national press, read our Sell My Story page.

You can also read a small selection of other pet and animal stories here: https://www.sellusyourstory.com/news/category/animal-stories/