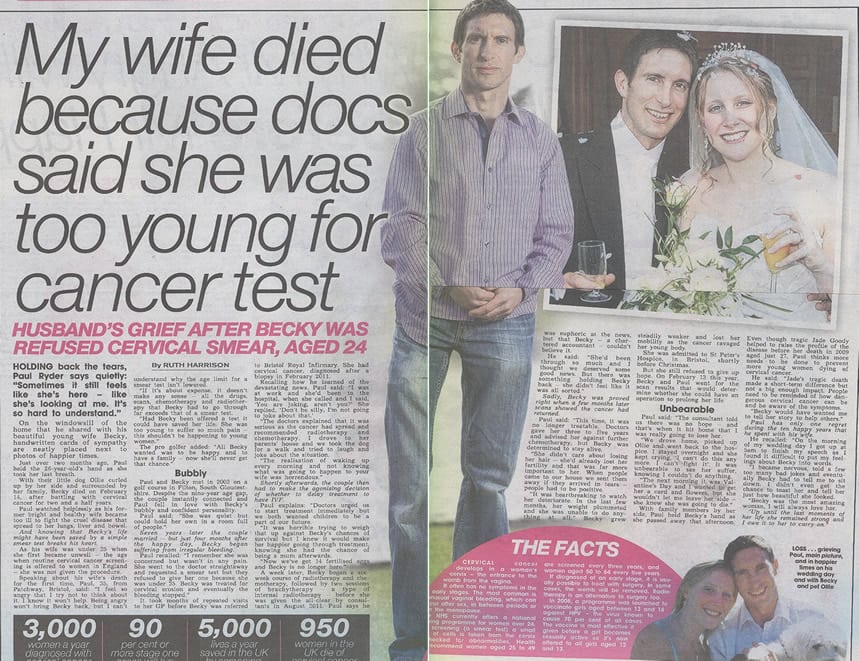 MY WIFE DIED AFTER DOCTORS SAID SHE WAS TOO YOUNG FOR A SMEAR TEST
PRETTY NEWLYWED, BECKY, 26, DIED OF CERVICAL CANCER AFTER BEING REFUSED A SMEAR TEST BECAUSE SHE WAS TOO YOUNG, HER DEVASTATED HUSBAND, PAUL, 35, CLAIMS.
SHE FIRST VISITED HER DOCTOR WHEN SHE WAS 24 BUT HER REQUESTS FOR A SIMPLE CANCER TEST WERE TURNED DOWN BECAUSE SHE WAS UNDER THE RECOMMENDED AGE OF 25.
INSTEAD SHE WAS DIAGNOSED AND TREATED FOR A COMPLETELY DIFFERENT COMPLAINT. IT TOOK 15 MONTHS OF REPEAT VISITS TO HER GP BEFORE SHE EVENTUALLY WENT TO SEE ANOTHER DOCTOR WHO FINALLY DETECTED THE DEADLY DISEASE.
BUT DESPITE MONTHS OF INTENSIVE RADIOTHERAPY AND CHEMOTHERAPY SESSIONS, AND RECEIVING THE ALL-CLEAR, THE CANCER SPREAD AND BECKY PASSED AWAY ON FEBRUARY 14TH THIS YEAR.
NOW HER BEREAVED HUSBAND IS CAMPAIGNING TO RAISE AWARENESS OF CERVICAL CANCER AND ENCOURAGE SMEAR TESTS TO BE CARRIED OUT ON WOMEN UNDER 25. 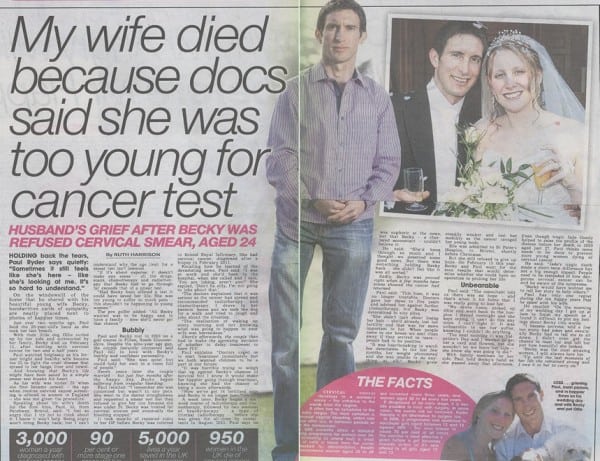 – Becky first went to her doctor at the end of 2010 with unexplained bleeding.
– But despite requesting a smear test she was refused because at the age of 24 she was too young.
– Government legislation was changed in 2003 meaning regular smear tests are only given to women aged 25 and over.
– Before that all women over 20 were given the tests and they still are in Wales.
– Instead Becky was diagnosed with a completely different complaint.
– She was told she had erosion of the cervix and was given treatment which briefly stopped the bleeding.
– But when it returned she went back to see her doctor again.
– It took 15 months of repeat visits to her GP before she eventually went to see another doctor who finally diagnosed her with cervical cancer, which was confirmed following a biopsy in March 2011.
– She was immediately given radiotherapy and chemotherapy and an internal brachytherapy treatment – a more targeted form of radiotherapy.
– The couple also went through fertility treatment, where Becky’s eggs were frozen, so that they could still try for a family when treatment was over.
– Becky was given the all-clear in September 2011 after scans showed there was no sign of the cancer.
– Only months later, in January, Becky’s legs started to swell up and, after returning to the doctors, scans showed that the cancer had returned.
– Becky and Paul, who would have been together for ten years in June, and were due to celebrate their third wedding anniversary this year, tried to remain positive.
– But Becky was admitted to a hospice just before Christmas for blood transfusions.
– Despite months of intensive radiotherapy and chemotherapy sessions and, receiving  the all-clear, the cancer eventually spread and Becky died on February 14th – Valentine’s Day – this year.
– Paul  is now taking up Becky’s campaign to raise awareness of cervical cancer so that other young women do not die of the disease.
– Paul said: ‘Becky’s attitude to all that happened was pretty amazing.
– ‘We still thought she could fight but even more chemotherapy couldn’t get rid of it.
– ‘She was still trying to be positive and still thinking she was going to be ok.
– ‘Becky wanted a smear test done and requested it but because she was under 25 at the time they said it would just get returned and they would not do it.
– ‘She was treated for cervical erosion and then it was just left.
– ‘The bleeding did stop. But it came back again and that is when they looked into it a bit further. She saw a different doctor then and they raised a few more concerns.
– ‘Even when they said ‘sorry, it’s terminal’ Becky was still trying to be positive and still thinking she was going to be ok.
– ‘Becky wanted other people to know about her plight. It is vitally important that people know what to look out for and what to ask.’