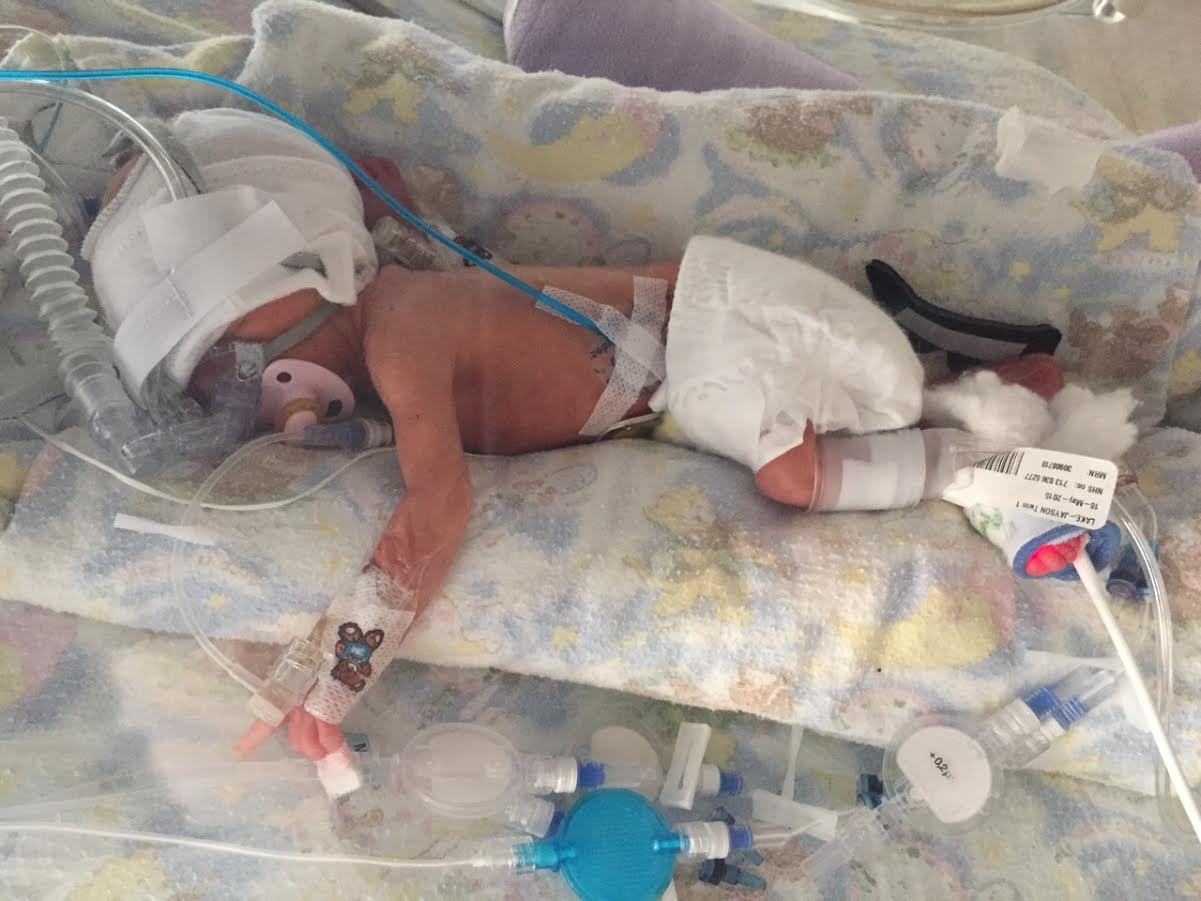 Sell a twins story, a triplets story, a quads story… or any other multiples!

Sell a twins story: Do you have twins, triplets or other multiples with an amazing story? We want to hear from you.

SellUsYourStory.com is here to help you earn money from sharing your story with magazines and newspapers. Help those in a similar situation and make money for yourself or a charity.

Our service is free. Fill out the form on this page to get a story valuation. There is no obligation.

This week we published twins, Ava and Austin’s story. Born very premature, little Ava and her twin brother, Austin, had a tricky start to life. But Ava’s was trickier than most after the tot spent the first three months of her life in intensive care.

When my husband Luke, 33 and I found out we were expecting, we were simply over the moon.

We’d been married in a fairy-tale ceremony just months before and calculated that we must have conceived very early on in our two week Cancun honeymoon.

Thinking I had a severe case of jetlag, it took me a few days to realise that it might be something else.

As I work in a maternity unit, when I got back, I mentioned it to a colleague and she suggested I might be pregnant.

We took some blood tests but they came back negative – I was a little disappointed but thought that we’d just have to fun while we kept trying!

Amazingly, a few days later I was feeling quite nauseous and so I picked up a few pregnancy tests from my local chemist – to my delight, they all came back positive.

Luke and I were so happy and couldn’t wait to start our little family together.

At just six weeks pregnant, it was a busy Christmas Eve (2014) I started to bleed as I was on my way home from work.

Turning on my heel I went straight back to the hospital for an emergency scan.

Thankfully it turned out that it was just a small bleed and that everything was fine… in fact it was more than fine – Luke arrived by my side just in time for the doctor to tell us that we were in fact, expecting twins.

I cried with happiness, burying my face in Luke’s shoulder as I took it all in.

It was the best Christmas present we could have ever hoped for.

The rest of the festive season passed by in a happy blurr.

As the pregnancy progressed, I had awful morning sickness but everything else was perfectly normal, and the girls at work were always keeping a close eye on me and imparting their words of wisdom.

The weeks passed and as my bump grew, I couldn’t wait to meet my babies.

I was just 27 weeks when I woke one night, hopping out of bed to fetch a glass of water, I was confused to feel a trickling sensation between my legs.

It was 3am but I knew my colleagues would be on shift at work, I called up with trembling hands, knowing enough know that something wasn’t right.

I was told to get myself into the ward ‘immediately.’

Arriving in a panic, Luke and I were told that my waters had broken and that I was in labour.

I looked over at Luke and apologised.

‘Babies born this young don’t make it,’ I told him simply. ‘I’m so sorry.’

He told me not to be silly and squeezed my hand tight.

But before we even had time to discuss anything, we were told that I was 5cm dilated and would need an emergency caesarean.

I called one of my best friends, and colleagues Holly, 27, and asked her to come and be my midwife.

I needed people I trusted around me.  It was all so fast. I couldn’t believe what was happening.

Less than an hour later, my two tiny babies were born by caesarean.

Holly vowed never to deliver for a friend again, she said it was just too emotional, and I can’t blame her.

Tears were pouring down our cheeks, as our precious bundles were rushed off to a neonatal intensive care ward.

We decided to call our twins Ava and Austin.

We then found out that Ava means life, and no matter how tenuous, it gave us a glimmer of hope.

Austin was very sick but he was relatively stable, whereas Ava was born not breathing and the medical team had to keep battling to get her to take in air.

I wasn’t allowed to see either of the babies initially as they were so unwell coupled with the fact that I had gone into a state of shock.

Failing to take in what had just happened, the twins should have still been safe in my tummy. But they were out in the world fighting for their lives.

I felt totally helpless, especially as we weren’t able to see them for a long time, but finally, 11 hours after they were born, I went into take a peek at them.

The premature baby ward was surreal with it’s spaceship blue lighting but our babies looked adorable even though they were so tiny.

Unable to touch or hold our babies

It was hell not being able to touch or hold them, we could only stare through the glass of their incubators.

I was desperate to comfort them and know what they smelt like.

But each day they grew gradually stronger, it was amazing to see them looking up at us for the first time.

There were some tricky moments but both of them are fighters and never gave up.

Thirteen long weeks later and we got to bring our babies home, they were still very small but had both made so much progress.

They continued to develop well and although a little late for some mile stones, they were healthy and happy.

While Ava was cheeky and outgoing where as her brother was sensitive and a bit shyer.

While Austin was addicted to his bunny comfort blanket, Ava was dummy obsessed!

Luke and I quickly adjusted to the whirlwind and chaos of life as a family of four.

But in summer 2016, Ava began to refuse food and water and seemed increasingly lethargic.

Mother’s instinct took over and I rushed her straight to our local hospital. She kept collapsing and couldn’t even hold her own head up.

Staff there had no idea what was wrong with Ava and I felt like we were losing precious time.

Staff had no idea what was wrong with Ava

Becoming hysterical, as I could see she was fading fast, I screamed at doctors to transfer her to a bigger hospital.

Thankfully we were rushed Addenbrooks Hospital, Cambridgeshire, where, with more sophisticated equipment they quickly realised Ava had a problem with her heart.

Ava was finally diagnosed with Dilated Cardiomyopathy, a rare but serious condition which affects the hearts ability to pump blood.

Unable to deal with the severity of her condition we were transferred once again, this time to Royal Brompton in Chelsea, London, which specialises is heart conditions.

She was rushed to intensive care and put on life support.

Wired up to 19 different machines

At one point I counted 19 machines she was wired up to. They were all working on her and keeping her alive.

Luckily my mum and dad, Alison, 58, and Paul, 61, had Austin and Luke’s family had rented us a flat (at an incredible cost) nearby the hospital so that we could be with Ava full time.

On day three at the Brompton, Ava’s heart function dipped as low as 5 per cent and she had a cardiac arrest.

It was one of the worst moments of my life and I felt like I was going to lose my precious girl at any second.

The doctors there sat us down and told us that Ava was unable to sustain life. Her only chance was to be put on to a ECMO machine.

The ECMO provides a heart and lung bypass, which lets the organs rest. It is used only in the rarest circumstances as it has lots of risks.

A few days later Ava was doing well and our hopes began to rise again.

Because of the effect the ECMO has on the body, medics recommend it isn’t used for more than a week… Ava had been on it for nine days so we had to take her off.

It was an unbelievably stressful time. Made worse by the fact that she had a 1/3 chance of dying after the ECMO was removed.

I felt like I was holding my breath as she took her first breaths all on her own.

Ava needed 11 blood transfusions but to our total delight she coped really well. Her incredible doctors and nurses hailed her a ‘miracle’.

But this joy was short lived, as we then found out that she had indeed had a stroke whilst on ECMO, which is one of the common side effects.

The stroke affected her left hand side and had also given her a mild form of cerebral palsy.

But, even with the stroke, she was growing stronger and stronger by the day.

Luke and I did lots of exercises with her and did research online to make sure we had everything she needs in order to get better as fast as she could.

She’s exceeded all expectations as by March 2017, she was walking again!

Ava’s doctor’s still can’t believe how well she’s done and continues to do.

Her and Austin are just like any normal brother and sister now: they play and bicker away in their toddler babble.

Of course Ava needs lots of tests still and we have to keep a close eye on her but our family is whole and that’s what counts.

Sell a twins story or other multiples

If you want to sell a twins story or other multiple birth stories, get in touch today. We’ll help you get your story published for the highest price possible.

Perhaps you have a different story? We’re not just seeking people wishing to sell a twins story. Maybe you have an amazing surrogacy story, a health related story, something bonkers happened to you, or anything else?

Simply fill out the story valuation form on this page.  For more info about how to sell a twins story, or any other story, see the Sell My Story page.