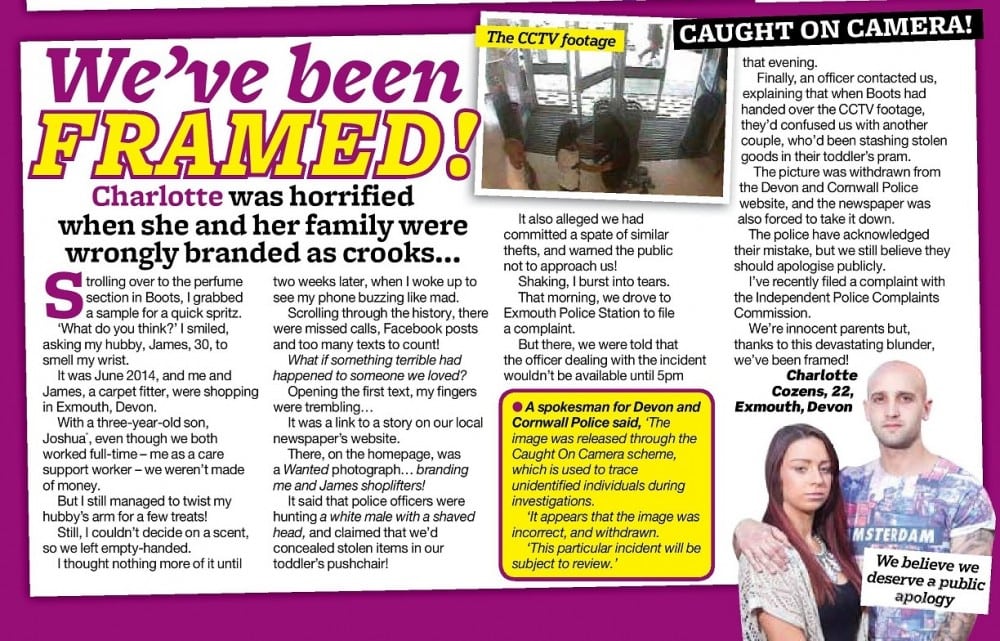 An innocent young couple found themselves wrongly accused of shoplifting after bungling police issued a CCTV ‘wanted’ photograph of the pair to the public.  The couple thought of Jeremy Beadle and You’ve Been Framed! but sadly this was no joke! 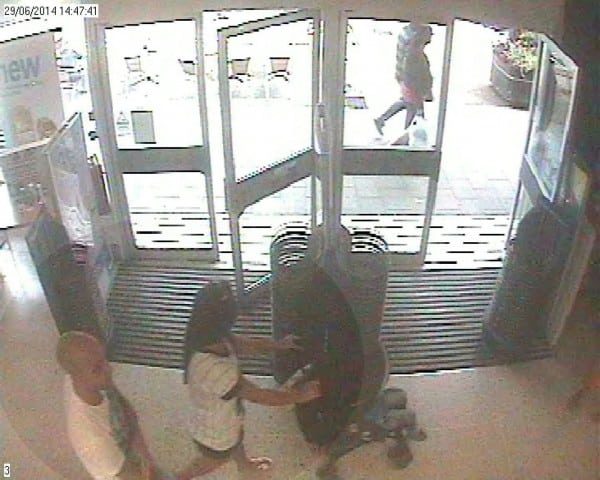 CCTV shots of Charlotte and James shopping in their local Boots with their three-year-old son were sent to the media as part of a ‘caught on camera’ appeal. They were accompanied by a description of the pair and details of how they stashed stolen goods in their toddler’s pushchair.  The release also came with the warning to the public not to approach the couple who were suspected of similar raids at other Boots stores.  NHS worker Charlotte, 22, knew nothing about the investigation until a friend texted her a link to the picture on a local newspaper’s website.

By then it had been published for more than 24 hours and had been shared 250 times on Facebook – with users branding Charlotte a thief and a ‘bad mum’.  Horrified Charlotte protested to the police who have since withdrawn the appeal and promised to review procedures on witness appeals.  The force issued the black and white CCTV after several items went missing at a Boots in June.  Officers were said to be hunting a ‘white male, with a shave head and white t-shirt’ and a ‘white female with long black hair, white top with large number on chest, black short skirt.’  The two suspects were alleged to have walked inside then ‘concealed items in a push chair’ before leaving ‘without making payment.’ 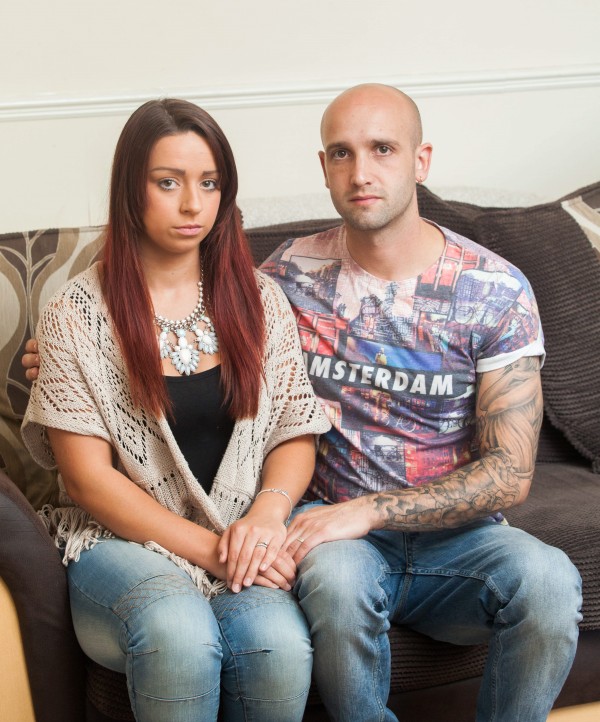 Police went on to say the same pair were believed to be behind a spate of similar thefts at Boots stores across the county.  The appeal ended with the warning: ‘Members of the public should not approach anyone who they believe to be displayed in the images.’  Shocked Charlotte said she and carpet fitter husband James, 30, are now worried about leaving their home in case they suffer abuse. – She said: ‘It was horrific, we were so shocked. It’s broken us both, we’re so upset. We both work really hard for our money and would never steal anything.  ‘The photo is really clear and we are recognisable in it. And for my son to be pictured too, is just awful. ‘I didn’t know what to do, I felt like I couldn’t leave the house. It’s caused us so much stress, I haven’t slept much or eaten properly.

‘It’s disgusting how this mistake could have happened to innocent people. ‘Seeing everything which was written about me, including that I was a bad mum, has been so upsetting. ‘We work hard for our money and would never do something like this.’ The police promised to review their ‘Caught on Camera’ scheme to prevent a similar mistake – but stopped short of apologising to Charlotte and her husband.  A spokesman said: ‘Devon and Cornwall Police have been made aware of the release of an image in relation to the investigation of a shoplifting offence.  ‘Subsequently it appears that the image was incorrect and was withdrawn.

‘The image was released through the ‘Caught on Camera’ scheme, which is used to trace unidentified individuals during investigations. Such images are published when the police have been unable to identify the individuals through any other means, relying on the public to help with our enquiries.’ This particular incident will be subject to review to ensure that our procedures are robust and comply with legislation and current procedures. Charlotte and James yesterday demanded a public apology from the police for wrongly branding them shoplifters.  Charlotte – who asked not to name her son – said: ‘We were told that Boots handed the disc to the police but it was the wrong footage. We don’t know anything more than that. – ‘The pictures have been in the local paper and on the Devon and Cornwall Police website for weeks.

‘They have acknowledged the mistake but they haven’t apologised. I think both Boots and the police should publicly apologise. Someone saw it on Facebook and commented that stealing was bad enough, but to do it with a child was even worse – what kind of example are you setting the child? It’s devastating because we’ve worked so hard to get where we are in life and we would never do anything wrong.’ – Boots said the company did not want to comment.

Would you like to share a story with the press to clear your name?  If you would, or you have any other story to sell to the national press, simply fill our or story valuation form today.  Nothing will be printed without your permission, but we will be able to call you back with a valuation for your story, and we can explain a little more about the process.

You can read more about how to sell a story, sell a video clip, or sell a picture to the press on our Sell My Story page.

You can also see more of our latest stories that have been printed in national newspapers and magazines here: Latest client stories