TIPPING THE SCALES AT A WHOPPING 28ST AND STRUGGLING TO SQUEEZE INTO A SIZE 32, SINGLE MUM, JANE, 38, WAS TERRIFIED HER WEIGHT WAS GOING TO KILL HER. THE ENORMITY OF HER PROBLEM HIT HOME WHEN DOCTORS WARNED HER SHE WOULD BE DEAD IN FIVE YEARS – MEANING SHE WOULDN’T BE AROUND TO SEE HER SONS REACH THEIR TEENS.

NOT WANTING TO LEAVE THEM WITHOUT A PARENT, SHE VOWED TO SLIM DOWN. NOW 12 MONTHS ON, SHE IS 13ST LIGHTER AND A SLENDER SIZE 16. JANE KEPT AN AMAZING PHOTO DIARY OF HER PROGRESS TO SHOW HER INCREDIBLE TRANSFORMATION, BUT SHE REFUSED TO LOOK AT ANY OF THE PICTURES UNTIL A WHOLE YEAR HAS PASSED.

For the first time in my life, I can finally look in the mirror and honestly say that I’m not repulsed by my appearance. For years I avoided glancing at my reflection, ashamed of the heifer staring back at me.

I wasn’t just fat – tipping the scales at 28st and bursting out of a size 32 – I was morbidly obese. A yo-yo dieter, I tried every fad in the book, but no matter how many times I attempted to ditch the junk food I would always sink back into my bad habits. As a busy mum-of-two I grabbed a chocolate bars or bags of crisps whenever I had the chance. Any gaps in my hectic schedule in between school runs, the house work and dashing around after my sons, Connor, ten, and Callum, eight, involved me scoffing whatever I could get my hands on. It was all about convenience.

Raising the children as a single parent meant I constantly had my hands full – especially as Callum was extensively brain damage when he was starved of oxygen at birth. Unable to walk, talk, or feed himself, he needed around-the-clock attention. After abandoning my career plans as a trainee nurse I became Callum’s full-time carer. With no time to myself, I felt there were never enough hours in the day to squeeze in an exercise session or to think about healthy eating. I rarely thought about the food I was gorging on, as my mind was on getting Callum’s medication and care right. Soon I learnt to push any little niggles I had about my size to the back of my thoughts. I just tried to focus on giving the boys the best upbringing I could.

The enormity of my problem only hit home when my doctor warned me that if I didn’t do something about my weight I would be dead in the next five years – meaning I wouldn’t be around to see my sons reach their teens. The thought of leaving them without a parent was terrifying – especially as Callum was completely dependent on me – and I knew there and then that I had to slim down.

I had been always been a big girl, but my weight first spiralled out of control when I suffered relentless bullying at school. My classmates used to tease me about my frumpy figure and in reference to my jelly belly one even taunted: ‘Have you ever even seen over it to your feet?’ I turned to food for comfort. The more miserable I became the more I ate. It was a vicious circle.

Binging on daily takeaways and stuffing whole packets of biscuits meant I piled on the pounds. By the time I was 18 I had hit 20 stone. As my weight crept up and up I found it harder to change my ways – leaving me huge my entire adult life. I felt powerless to stop myself getting any bigger. Not knowing where to turn for help I booked an appointment to see my GP and begged for a gastric bypass operation.

The surgery would see doctors re-route my digestive system to pass most of my stomach – which would be reduced to just five per cent of its original size. It would force me to eat just a few hundred calories a day and feel full after smaller amounts. I spent countless sleepless nights agonising over if it was the right decision but deep down I knew I couldn’t face my fat demons alone anymore.

When I was given a date for the procedure, I felt an overwhelming sense of relief. But at the same time, I couldn’t help but repeat the same worry in my head: ‘What if there are complications and the boys end up without a mum?’

Deep down I knew if I didn’t go through with it my weight would kill me and Connor and Callum would lose their mum anyway. It was my only option. The bypass took some adjusting to, but I soon settled into a new routine and began eating all of my meals in smaller portions served up on a side plate.

To chart my progress I decided to keep a picture diary and take photos of myself each time I lost a stone. I wanted to create a permanent reminder of how much my body had changed and how far I had come. But I couldn’t bear to look at the earlier photos and after a few months I decided instead of seeing any of them I would wait to view a montage once a whole year had passed. That way I would be able to see just how much weight I had lost.

I dropped a stone a month and now 13 months on I am 13st lighter – weighing a healthier 15st and slipping into a slender size 16. Now I’ve gone from hiding at the first sight of a camera to loving the posing for pictures. The first time I saw the montage I was left speechless. I’ve had it framed and I’m going to hang it on my bedroom wall. I looked like a completely different person and even my growing confidence was visible as a wider smile spread across my face each time a picture was snapped. 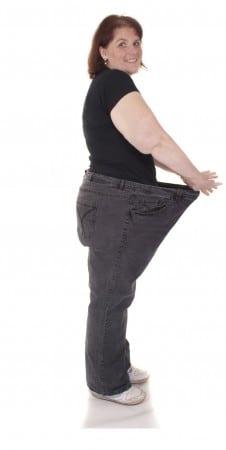 Picture One – October, 2012
Weight: 27st 2lbs
Dress size: 32
Taken less than a month after my operation, in my first photo I had already lost 10lbs. I was dreading the picture diary, despite it being my idea, and I think it shows in my glum expression. Also my skin isn’t very clear as you can see quite a few spots.
Picture Two – November, 2012
Weight: 25st 1lbs
Dress size: 30
Another 15lbs off here and my clothes are suddenly much looser, even though I can’t really see too much change at the moment. I’ve still got a false smile plastered across my face and am feeling quite uncomfortable in front of the camera.
Picture Three – December, 2012
Weight: 24st 2lbs
Dress size: 28
At this point I had lost a further 13lbs and I was starting to feel good. My top was flattering and I was beginning to see slight changes in my face which cheered me up. My skin already looks much better.
Picture Four – January, 2013
Weight: 23st 8lbs
Dress size: 26
Post-Christmas and I had managed to lose weight over the festive period for the first time ever. I shed a whole 9lbs despite being surrounded by tempting treats and to celebrate I decided to change my hair colour from my natural blonde to red.
Picture Five – February, 2013
Weight: 22st 8lbs
Dress size: 24
Proudly posing in my size 24 top – after dropping four dress sizes in five months – another stone lighter. My smile is genuine this time, as I am becoming more and more confident.
Picture Six – April, 2013
Weight: 21st 8lbs
Dress size: 24
We missed a shot in March. I didn’t really feel any different this time, as was still wearing the same clothes. But I was much happier to get in front of the camera than I was at the start.
Picture Seven – May, 2013
Weight: 20st 8lbs
Dress size: 20
Two months on from my size 24 top and I’m enjoying being able to get into a size 20 top in time for the summer. Having such a drastic drop in dress size made me feel so good, and it shows in my smile. My face looks much thinner too.
Picture Eight – June, 2013
Weight: 19st 6lbs
Dress size: 18
My smile is getting bigger as my confidence grows. I’m wearing a pretty top for the first time instead of a practical t-shirt which makes me feel feminine.
Picture Nine – August, 2013
Weight: 17st 4lbs
Dress size: 18
We missed a shoot during July. I have dyed my hair darker and I think that combined with my weight loss makes me look a bit younger.
Picture Ten – September, 2013
Weight: 15st
Dress size: 16 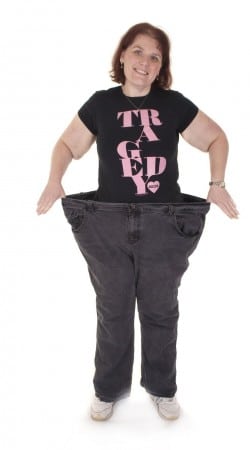 Twelve months after my op I have just stepped into my original pair of size 32 jeans that were getting too tight for me and there isn’t a chance of them fitting – I can hold them out for several inches on each side.

I hadn’t realised as the jeans have been hidden in a drawer since I first started losing weight. I can’t stop beaming. Finally, I’m 13st lighter and still going.

——-
Do you have a weight loss story that you would like to sell to the national press?  We guarantee to pay the most money for your story so get in touch using the form on the right hand side of this page.  You can email photos to: story@swns.com
If you would like to read more about selling a weight loss story to the press, please see our Weight Loss Page:  https://www.sellusyourstory.com/sell-my-weight-loss-story/