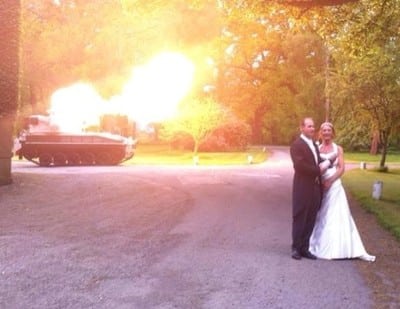 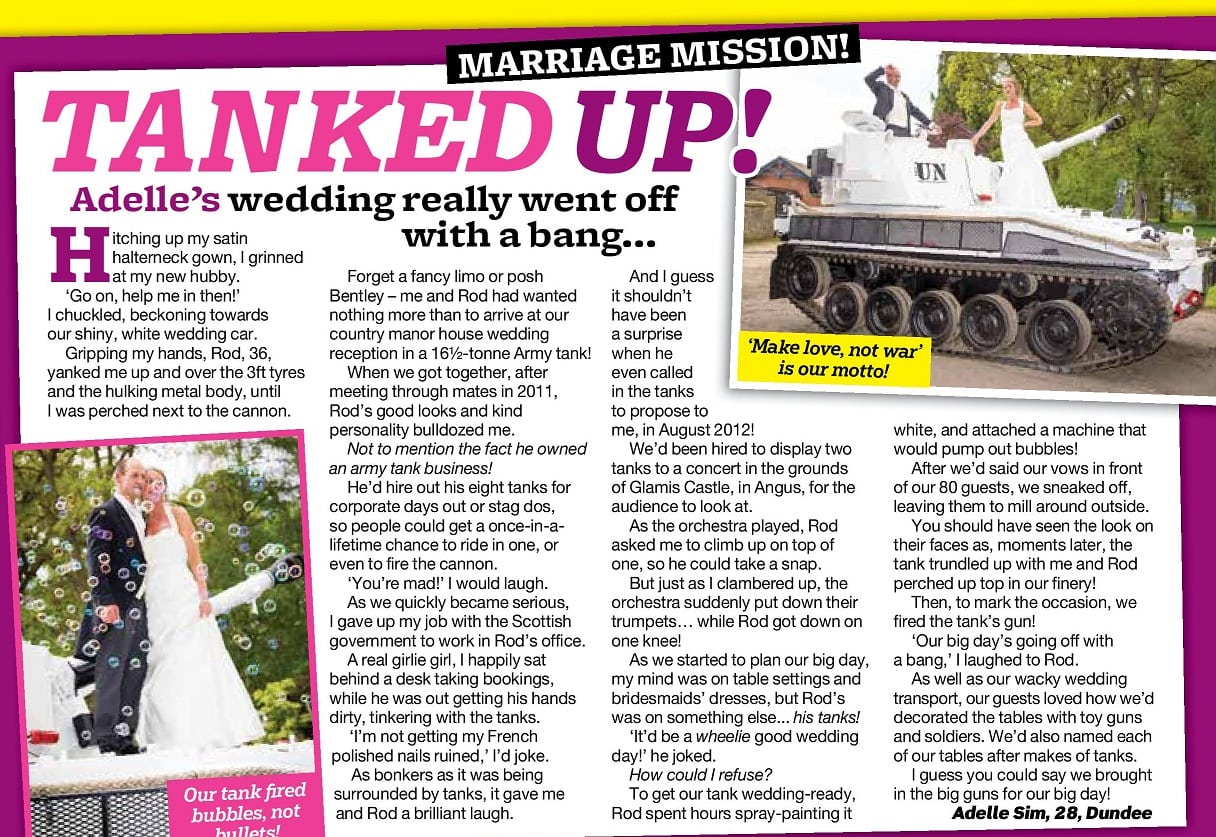 We love wedding stories, hen party stories, and stag stories.  If you’ve got a story that is wedding related, we’ll pay you to share it.  Here, our client Adelle shares her very unique wedding story.

With the wedding dress and suit, venue and guest list to organise as well as two families to please, getting married can be a real battle for couples. 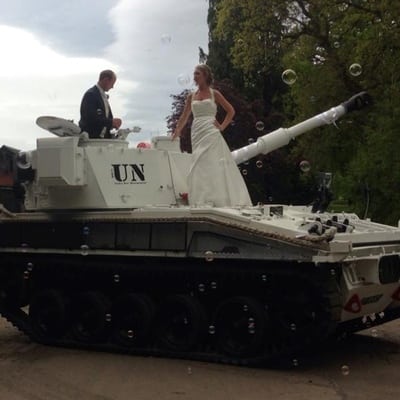 But Adelle and Rod took the idea literally and called in the big guns on their special day.  The pair rolled into their wedding celebrations on a 16.5 tonne tank which was painted wedding white especially for the occasion. The couple thought the Abbot self-propelled gun would bring their marriage full circle as Rod proposed on top of the piece of armour at the Scottish Proms in 2012.

The couple, who own the a tank driving business, got married last week. Adelle, 27, said: ‘I’ve been to lots of weddings before and some of them can get a bit samey. ‘Nobody would say that about ours though, bringing the tank was a lovely extra feature to our day.’

‘During the interval we got on top of the tank, she just thought it was for newspaper pictures. ‘But the announcer said ‘if everyone could just turn around, that man has a special question to ask’. ‘Of course Adelle was really shocked when I got down on one knee but luckily she said yes. ‘So we thought it would be quite fitting to involve it in our actual wedding.’ Adelle said: ‘I was absolutely gobsmacked, he’s such a quiet person usually but he just keeps surprising me.’ 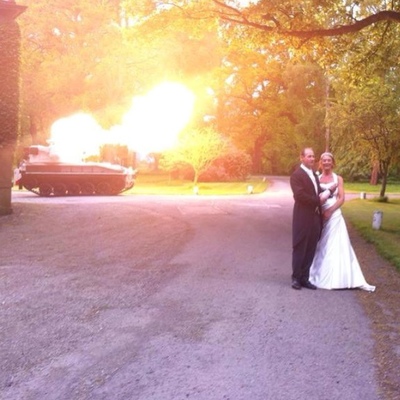 After the marriage ceremony, crowds of guests gathered around the happy couple, expecting them to pop a cork on a Champaign bottle. But the weddings guests got a real surprise when bubbles floated out from the tank instead. Rod said: ‘We got the guests to do a countdown but they just thought we’d be popping a cork.  ‘They all expected a static show but we fired off a round from the main gun.

‘Fair to say there were a lot of open mouths and people covering their ears.’We later found out that the gun went off just as St. Johnstone scored their first goal in the Scottish Cup final, which is a bit of a happy coincidence the wedding was so close to Perth.’ Adelle said: ‘It was just an explosion of light.

‘All the guests were really shocked, their faces were a picture.’ The gun itself was formerly property of the British Army and saw service in the first Gulf War. Rod snapped it up from a private collector when he switched from driving limousines to setting up his own heavy armour business in 2008. Before the gun was ready for the big day they had to give it a re-spray from its usual khaki. He said: ‘If you look very closely it says ‘Rod is under new management’. It was a bit of a joke on behalf of the new wife.’ She said: ‘We have had so many comments from guests that it was a wedding that could not be bettered.’ Rod added: ‘We weren’t able to get away on honeymoon because we’ve got lots of bookings coming up so I reckon that day will take quite some beating.’

We secured an exclusive magazine deal for Adelle and ensured that she received the maximum fee possible for her story.  If you have a unique wedding story, get in touch using the story valuation form on this page.  There is no obligation and nothing will be printed without your permission (we adhere to IPSO, so your information is safe in our hands).

To read more about how to sell your story to the press, see our Sell My Story page.