Couple give birth to two sets of twins after being told they probably couldn’t have children.

Katherine McCulloch, thought she was infertile due to a rare form of Pelvic inflammatory disease (PID) which caused a build up of scar tissue. She and her partner Aaron Tricker were today celebrating having two sets of twins!

If you would like to share a story, about twins, or anything else that would make an interesting feature, simply fill out our story valuation form on this page.  We’ll let you know how much your story is worth.  There is no obligation, and we won’t share anything you send us until you are happy to move ahead.

A young couple who were told they’d never conceive are celebrating their sons’ second birthday – after having two sets of twins in just 18 months.

Katherine McCulloch, 24, thought she was infertile due to a rare form of Pelvic inflammatory disease (PID) which caused a build up of scar tissue.

She and her partner Aaron Tricker were astonished to learn she was pregnant with non-identical twins Brayden and Logan, who have today (mon) turned two.

But the couple described a second unexpected pregnancy as “an absolute miracle” after also becoming parents to non-identical twin girls Rhea and Lyra in December last year.

Katherine said: “It is an absolute miracle. We can’t describe how lucky we feel to have a complete family after thinking we would never have any children.

Heartbroken after being told I was infertile

“I have always wanted children so I was heartbroken to think I would never become a mother.

“To have one set of twins is incredible enough but to be blessed with two more children, and all within such a short period of time, is nothing short of amazing.”

Katherine and Aaron, 26, who met through friends seven years ago, had got used to the idea they would never have children after doctors told them she was infertile.

“We spoke about having children but two years after we got together I went into hospital with pains in my stomach,” said Katherine.

“I was told I had PID which had caused scarring and left me unable to conceive.

“I was devastated but we have big families so we tried to move past it and be thankful for the family we had.”

The couple, from Ipswich, Suffolk, stopped using contraception and over two years later, Katherine realised her period was late.

She immediately thought she might be pregnant and rushed to take a test – only to find her dream of becoming a mother was about to come true.

Katherine said: “I was never late coming on to my period so I just knew.

“When I did the test and confirmed I was pregnant, I couldn’t believe it. I didn’t think it could be true.

“Because of my medical history, they sent me for an early scan. That’s when they realised there were two heartbeats.

“We were so happy. I was over the moon that I was giving Aaron the chance to be a father because I thought it was something I could never give him.”

Katherine’s pregnancy went smoothly and she gave birth to Brayden and Logan on March 20, 2015. 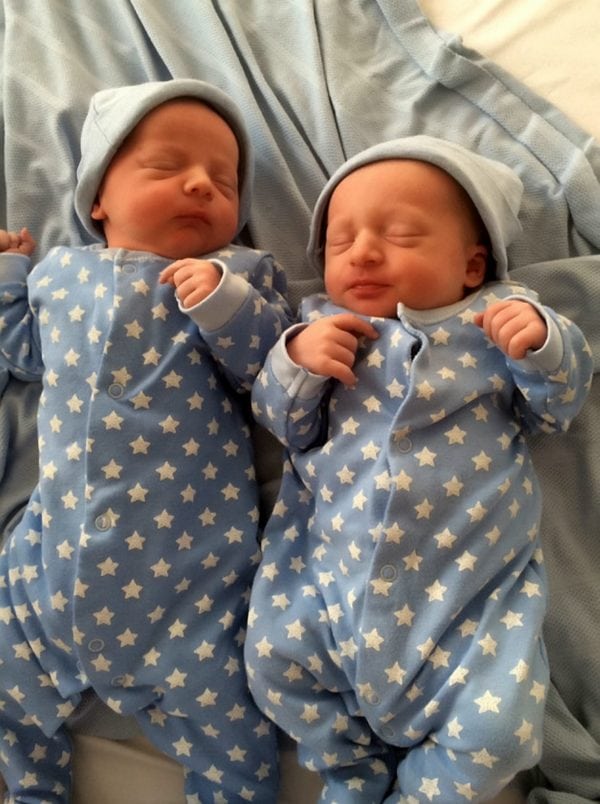 But despite having managed to fall pregnant with the boys, she was told it was very unlikely she would be able to conceive any other children.

To be safe, Katherine went on the pill but decided to have a month’s break after suffering from headaches thought to be triggered by the contraceptive.

She said: “I went on the pill because doctors advised me to but never in a million years did I think I’d ever have any more children.

“When I came off it for a few weeks, I was complacent because I thought there was no way I’d get pregnant.

“But when my period was late again, I just couldn’t believe it. I knew it had happened again.”

A pregnancy test confirmed Katherine was due to have another baby, despite her twin boys being just 13 months old.

She suffered a bleed and so doctors performed an early scan to check for signs of miscarriage.

This time, Katherine and Aaron, who both have a history of twins in their families, were told they were expecting just one baby.

That was until her 12-week scan when the midwife again picked up two heartbeats.

Katherine, who used to care for elderly people with dementia, said: “You couldn’t make it up.

“I couldn’t believe that I was going from having no children, to two and then four in just a few months.

“We were so happy to find out it was going to be girls the second time round.”

Rhea and Lyra were born on December 6, 2016, and like their older brothers, they are non-identical twins.

Aaron, a full-time kitchen worktop fitter, said: “It’s all been a bit of a shock to be honest.

“But once we got our heads around it, it’s been great. I love having them all so close together and it’s over and done with now.

“It’s quite an experience and I try to spend as much time as possible with them all when I’m not at work but they’re quite a handful.

“It’s lovely to walk through the door and have my ready made family there waiting though, it’s something I never thought we would have.”

Two sets of twins….  is enough!

After the whirlwind pregnancies, the couple have decided enough is enough and the don’t plan to have any more children. Two sets of twins is probably enough for anybody!

“It’s nice to do it all in one go and get the hard work out of the way.

“Although they’re all close as brothers and sisters, each of the twins have their own unique bond which is so special to see.

“They’re so special to me, they’re my everything.

“Our families joke that we should try and get pregnant again to see if we could make it a third set of twins but it’s a complete no-no as it would probably happen!”

Sell your twins story, other multiple birth stories, or anything else newsworthy

If you would like to find out more about selling your multiple birth story to the national press, get in touch using our Story Valuation form on this page.

Simply tell us a few basic details about your story, and we’ll let you know if it’s something we could assist you with.

Our service won’t cost you a penny, but we will ensure you get the highest fee, and that your story is told YOUR way.

For more information about the process, read our Sell My Story page.