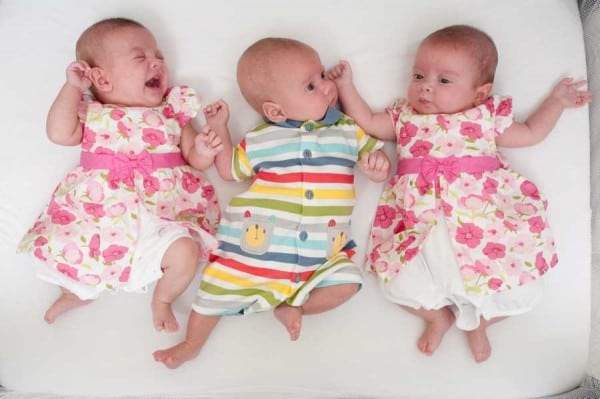 Do you have a miracle baby story to tell?  If so, we want to hear about it.  Magazine editors and readers love reading heartwarming and uplifting stories that give hope to others, especially involving miracle babies where there has been a happy outcome.  Read Michelle and Gary Harding’s story – they struggled to conceive for more than a decade and you can guess what happened next…

Pushing the trolley around the supermarket, while doing my weekly shop, I couldn’t help but gaze at parents with their newborn baby. Nappies, wipes and milk formula spilled out of their basket as they stocked up on the essentials.

Strolling up and down the aisles, new mums and dads were stopped every few paces by admirers, who stuck their heads over the pram. ‘Isn’t she beautiful’, ‘She looks just like you’, ‘Look at those chubby cheeks’, they cooed, while the proud parents gleamed with pride. Everywhere I looked there seemed to be happy families.

Broody, I had wanted to be a mum for as long as I could remember. When I was a little girl my favourite game was ‘mummies and daddies’ and I would happily play with my dolls all day long. But for my husband, Garry Harding, 35, and I, our dream of parenthood felt like it would never be a reality.

Childhood sweethearts, I was 16 when we met, Garry was 17 and in the year above. We married in September 2005 and as soon as we tied the knot we started trying for a baby. We both had siblings growing up and knew we wanted a big family ourselves. With nieces and nephews we’d had plenty of practice looking after little ones. But month after the month the home-testing pregnancy kits came back negative.

‘Don’t worry, it will happen eventually,’ Garry would soothe reassuringly as I moped around the house. Eventually after two years we realised I wasn’t going to fall pregnant naturally and we sought the advice of our GP who referred us to the fertility clinic at Southmead Hospital, Bristol. 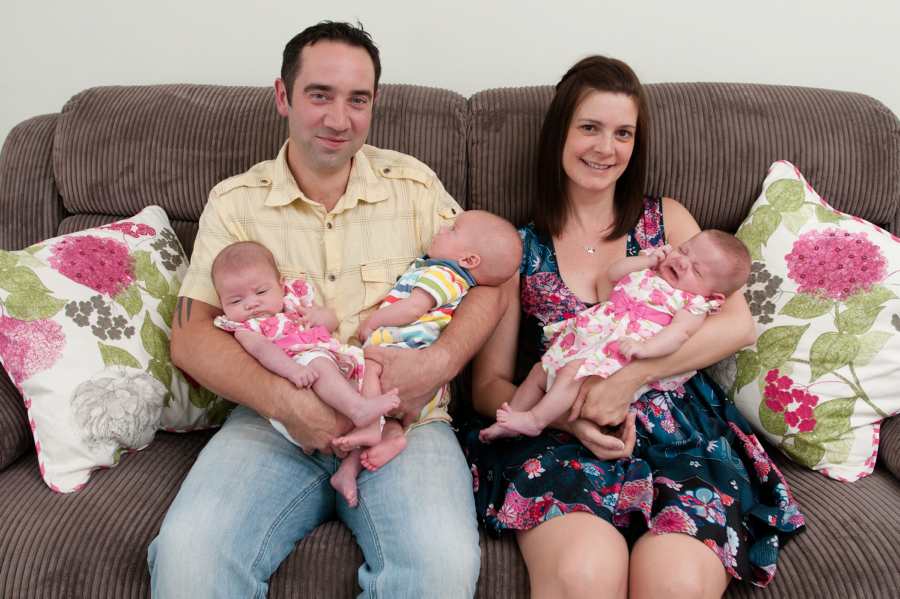 The process was long and we underwent test after test to see if they could discover why we couldn’t conceive – but medics couldn’t find anything wrong with either of us. As there was no medical reason to stop me from getting pregnant we thought we would keep trying. For almost a decade we had tried and failing to start a family. We even resigned ourselves to thinking it might never happen.

My friends had started having children of their own and every time one excitedly announced they were expecting and pulled out an ultrasound scan I couldn’t help but feel a pang of jealousy. But the niggling maternal urges wouldn’t budge and last year we decided to enroll into a NHS-funded treatment called intrauterine insemination (IUI) – which involved doctors selecting the fastest sperm from the man.

I had to inject my stomach every day to stimulate my ovaries, before the sperm sample was inserted directly into my cervix. Our first round of treatment in June 2013 proved unsuccessful. We returned for another round of IUI in September 2013. A few weeks later I held my breath and perched on the edge of the bath, pregnancy test in hand, to see whether we had finally conceived.

When a blue line appeared I burst into tears of joy. Garry heard me sobbing in the bathroom and from my reaction he immediately thought the worst. ‘We’ll try again,’ he promised, rushing in. But I shook my head and smiled, holding up the plastic stick. ‘These are happy tears,’ I whispered, in between sniffs. ‘I’m pregnant.’ Six weeks later I went to for a check-up scan at hospital. 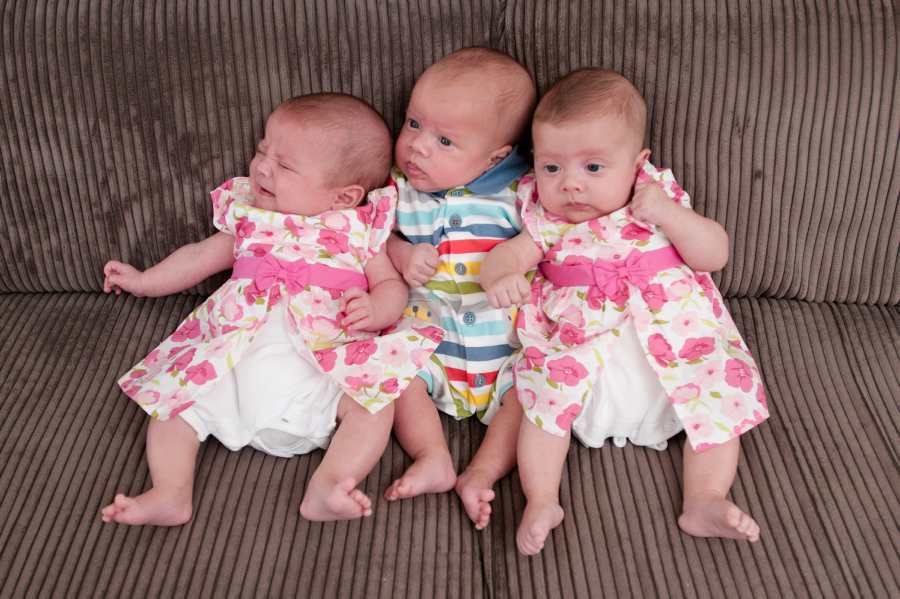 Garry was desperate to be by my side but he had reached the World Masters darts competition so I encouraged him to go to it – even though it meant he was more than 200 miles away in Hull. Instead my mum, Lorraine, came with me to the appointment for moral support.

I had been curled around the toilet most mornings with severe morning sickness and the nurse told me she had an inkling I might be expecting more than one baby if I had been feeling so poorly. ‘Surely not,’ I said, brushing off her suggestion. But when she performed an internal ultrasound I had a surprise in store…

‘There’s one heartbeat,’ she smiled. ‘Oh… and another.’ Beaming, I turned to mum and she squeezed my hand excitedly. The nurse had been right. ‘Oh… and another,’ she chirped. Stunned, I welled up. We weren’t just expecting one baby – we were having three.

Mum had tears streaming down her cheeks too. Garry and I had waited for nine years for a baby and now three had come along at once. ‘Triplets? Are you sure?’ I managed to ask, trembling from the shock. ‘Definitely,’ the nurse replied.

She explained the pregnancy would be classed as high-risk. I would need to be monitored every three weeks to check all of the babies were growing at the same rate and developing well. By the time I left the hospital I had six missed calls from Garry. Still struggling to absorb the news, I rang him to drop the bombshell.

‘We’re having triplets,’ I announced. Laughing, he said: ‘Stop pulling my leg. How did it really go?’ ‘I’m serious,’ I told him. ‘We’re going to have three babies.’ I could tell Garry still thought I was joking, so I convinced him by sending him a video and picture of the scan. Stunned, he almost dropped his mobile looking at it.

After the initial shock slowly started to sink in, we began to get very excited about our impending arrivals. The 12-week wait to tell our friends and family felt never ending. We held a gathering at our house and Garry announced: ‘We’ve won the lottery – not just once, but three times over.’ Friends gasped when Garry told them: ‘Michelle’s pregnant and we’re having triplets.’

Knowing the heartache we’d been through they were over-the-moon for us. As soon as we were in the clear, we rushed out to buy a three-seater pushchair and changed our car so we would be able to fit the tots in. But when I was five months pregnant I was driving to my job as a pensions worker when a vehicle pulled out of a junction and ploughed into the driver’s side of my car. 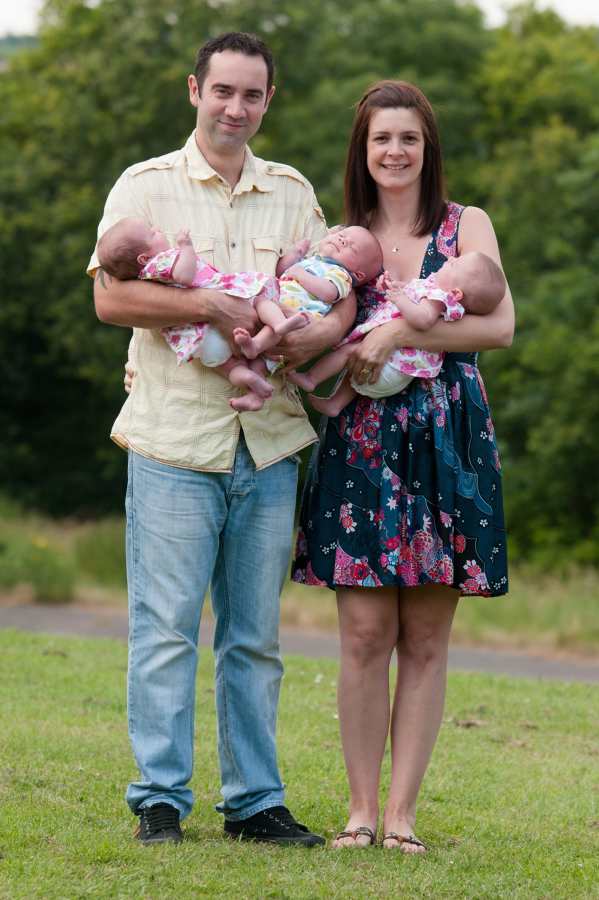 A witness called the ambulance and I was taken to A&E to be checked over. Garry dashed to be by my side and we both breathed a huge sigh of relief when we were told the babies were all fine – if a little shaken up. But just three weeks after the accident and in my 24th week I started bleeding. I was warned that if it happened I would need to go to hospital for an injection as I have a negative blood type.

At hospital medics scanned me internally and found that my cervix was opening and preparing for labour. They worried the babies were about to be born, so I was admitted to hospital and placed on complete bed rest. Eight weeks later, at 32 weeks, I had a planned C-section on April 7.

Garry was by my side as our daughter Evie was delivered first weighing 4lbs 5oz. Millie following weighing 3lb 6oz and their brother Max came last at 3lb 12oz. We didn’t know the sexes beforehand so it was a lovely surprise and Garry seemed secretly very relieved that he wasn’t completely outnumbered by girls.

Our babies were popped into sandwich bags to keep their fragile bodies warm and they had breathing equipment placed on them too. I caught a glimpse of Evie, but I wasn’t able to see Millie or Max, before all three were whisked away to neonatal intensive care. As I recovered from the operation the nurses wheeled me down to see my babies.

The next morning I was able to hold Evie and later that afternoon I cradled Millie for the first time. Max was slightly poorly so I had to wait a few days before I could touch him. Garry and I couldn’t believe they were actually ours. After almost a month in hospital we were able to bring them home with us.

Now we have our hands full and our daily routine is planned with military precision to juggle feeds, bath time and cuddles, but I wouldn’t change it for the world. We had always wanted a family on the larger side, we just never imagined all our babies would come at once.

If you have a miracle baby story (or multiple babies!) and you would like to share your story, fill out the form on the right hand side of this page and find out how much you can earn.  Your story will be in safe hands and nothing will be published without your consent.  SWNS is the largest and most respected press agency in the UK.  To learn more about selling your story, you can visit the Sell My Story page here.