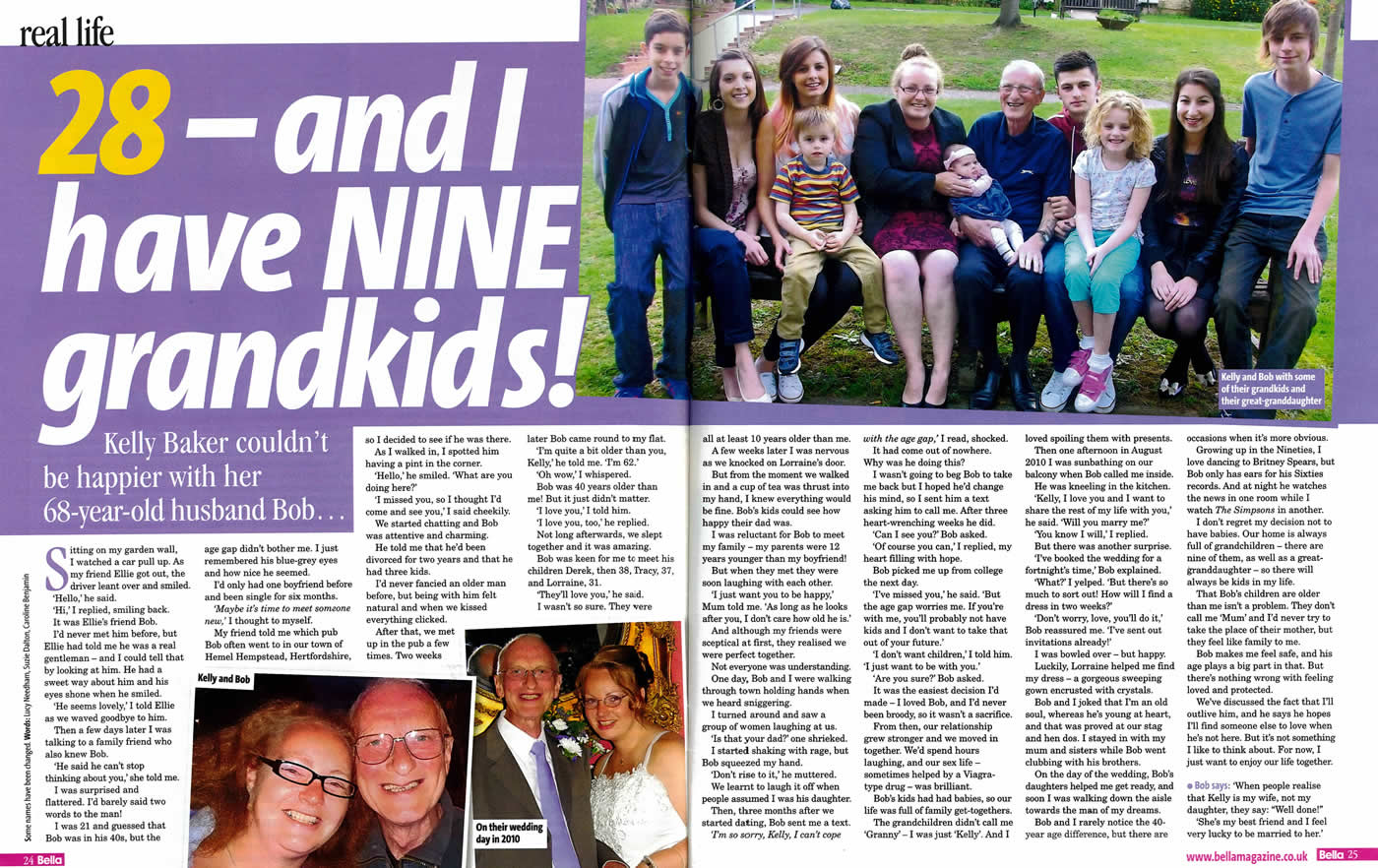 IT WAS LOVE AT FIRST SIGHT WHEN OAP BOB, 68, MET KELLY, 27.
DESPITE THE AGE GAP THE TWO HAVE BEEN TOGETHER FOR SEVEN YEARS AND MARRIED FOR THREE – WITH ROMANTIC BOB EVEN ARRANGING THE WEDDING IN SECRET.
YOUNG AT HEART PENSIONER BOB OFFERS TO TAKE KELLY CLUBBING BUT SHE PREFERS QUITE NIGHTS IN. BOB IS OLDER THAN KELLY’S MUM AND KELLY IS YOUNGER THAN BOB’S CHILDREN, BUT THEIR FAMILIES GET ON LIKE A HOUSE ON FIRE.

Pensioner Bob was married for 37 years and he was certain he would never marry again. But that all changed when he met Kelly – despite her being 40 years his junior. Romance blossomed straight away for the odd couple when Bob asked Kelly’s uncle for her number.
On their first date Bob took her to his local pub – he did offer to take his young girlfriend nightclubbing but Kelly is the one who prefers quiet nights in. Four years ago when Bob was planning his proposal he was so sure that she’d say yes – he booked the whole wedding as a surprise and only told her days before the big day. They might look like the father-of-the-bride in their wedding pictures, but Kelly’s totally smitten.
Kelly said: “It’s funny but the age difference doesn’t bother us at all. We just love each other very much and that’s what counts – not the age gap. Bob was the one who approached me he asked a family friend, who I call my uncle, for my number. It all went from there. For our first date he took me to a local pub and we chatted for hours. We get on so well – we even work together.
“My family love Bob – especially my Gran. She likes to spoil him at Christmas and on his birthday. Although Bob is 13 years older than my mum she doesn’t mind. She’s just happy that I’m with someone who looks after me. Bob’s got nine grandchildren altogether and I regard them as my family so having kids of my own isn’t something I worry about.”
Bob said: “The first time I saw her I thought she was beautiful. She had the most gorgeous smile. We chatted for a while and hit it off straight away. People always ask us about our age gap but we only notice it occasionally. For example, Kelly will watch The Simpsons in one room and I watch the news in the other. I offer to take her out nightclubbing but she’d much rather have a cosy night in.”
Although Bob is an OAP the couple still enjoy a healthy sex life. He said: “I do take viagra occasionally but I don’t need it half the time. It’s so much different with a younger woman. As for more kids – I’d never say never – Charlie Chaplin had a baby in his 80’s, but now I’m a great-grandad the family is quite large enough!”
If you have an unusual relationship story, we want to hear about it.  Just fill out the form on the right hand side of this page and tell us a little bit about your story. We’ll let you know if it would be suitable for us and we won’t print anything until you are happy with the fee offer and give us your permission.
Read more real life stories on our home page.