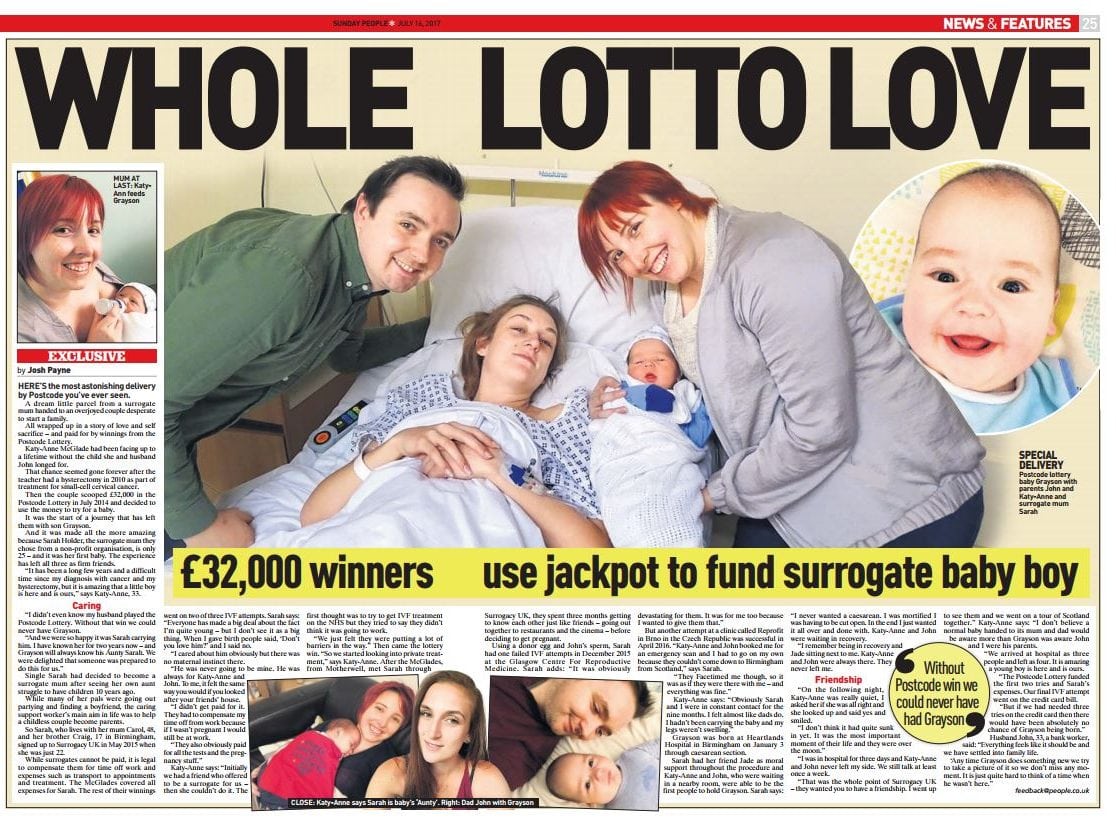 If you have a surrogacy story, or any other story you’d like to share, get in touch today.  We’ll help you tell your story, and get paid the maximum fee possible.  Help others in a similar situation. Raise awareness for a cause or a charity.

Simply tell us the main points of your story using our Story Valuation form.  One of our friendly team will get back to you.  We won’t use anything you send us without your permission and there is no obligation. Our service won’t cost you a penny.

The SellUsYourStory.com team helped Katy-Ann share her heartwarming surrogacy story.  We arranged an exclusive deal with the Daily Record, who offered the most for the rights to publish their amazing story.

This is the incredible moment one of Britain’s youngest surrogate mums made a couple’s dreams come true – when she placed their newborn baby in their arms.

Lifetime without the child

Katy-Anne McGlade had been facing up to a lifetime without the child she and husband John longed for.

That chance seemed gone forever after the teacher had a hysterectomy in 2010 as part of treatment for cervical cancer.

Then the couple scooped £32,000 in the Postcode Lottery in July 2014 and decided to use the money to try for a baby.

It was the start of a journey that has left them with son Grayson – and made all the more amazing because Sarah Holder, the surrogate mum they chose from an online agency, is only 25 and it was her first baby.

The experience has left all three as firm friends.

“It has been a long few years and a difficult time since my diagnosis with cancer and my hysterectomy, but it is amazing that a little boy is here and is ours,” says Katy-Anne, 33.

“I didn’t even know my husband played the Postcode Lottery. Without that win we could never have Grayson.

“And we were so happy it was Sarah carrying him. I have known her for two years now – and Grayson will always know his Aunty Sarah. We were delighted that someone was prepared to do this for us.”

Single Sarah had decided to become a surrogate mum after seeing her own aunt struggle to have children six years ago.

While many of her pals were going out partying and finding a boyfriend, the caring support worker’s main aim in life was to help a childless couple become parents.

While surrogates cannot be paid, it is legal to compensate them for time off work and expenses such as transport to appointments and treatment.

The McGlades paid Sarah and the rest of their winnings went on two of three IVF attempts. Sarah says: “Everyone has made a big deal about the fact I’m quite young – but I don’t see it as a big thing.

“When I gave birth people said ‘don’t you love him’ and I said no.

No, I don’t love him

“I cared about him obviously but there was no maternal instinct there. He was never going to be mine.

“He was always for Katy-Anne and John. To me, it felt the same way you would if you looked after your friends’ house.”

Katy-Anne says: “Initially we had a friend who offered to be a surrogate for us – then she couldn’t do it.

“The first thought was to try and get treatment on the NHS but they tried to say they didn’t think it was going to work.

“We just felt they were putting a lot of barriers in the way.” Then came the lottery win. “So we started looking into private treatment,” says Katy-Anne.

After the McGlades, from Motherwell, met Sarah through Surrogacy UK, they spent three months getting to know each other just like friends – going out together to restaurants and the cinema – before deciding to get pregnant.

Using a donor egg and John’s sperm via IVF, Sarah had two failed attempts in December 2015 at the Glasgow Centre For Reproductive Medicine.

Sarah adds: “It was obviously devastating for them. It was for me too because I wanted to give them that.” But a third attempt at a clinic called Reprofit in Brno in the Czech Republic was successful in April 2016.

“Katy-Anne and John booked me for a scan and I had to go on my own because they couldn’t come down to Birmingham from Scotland,” says Sarah.

“They Facetimed me though, so it was as if they were there with me – and everything was fine.”

Katy-Anne says: “Obviously Sarah and I were in constant contact for the nine months. I felt almost like dads do. I hadn’t been carrying the baby and my legs weren’t swelling.”

Grayson was born at Heartlands Hospital in Birmingham on January 3 through caesarean section.

Sarah had her friend Jade as moral support throughout the procedure and Katy-Anne and John, who were waiting in a nearby room, were able to be the first people to hold Grayson.

Sarah says: “I never wanted a caesarean. I was mortified I was having to be cut open. In the end I just wanted it all over and done with. Katy-Anne and John were waiting in recovery.

“I remember being in recovery and Jade sitting next to me. Katy-Anne and John were always there. They never left me.

“On the following night, Katy-Anne was really quiet, I asked her if she was all right and she looked up and said yes and smiled.

“I don’t think it had quite sunk in yet. It was the most important moment of their life and they were over the moon.”

“I was in hospital for three days and Katy-Anne and John never left my side. We still talk at least once a week.

“That was the whole point of Surrogacy UK – they wanted you to have a friendship.

“I went up to see them and we went on a tour of Scotland together.” Katy-Anne says: “I don’t believe a normal baby handed to its mum and dad would be aware more than Grayson was aware John and I were his parents.

“We arrived at hospital as three people and left as four. It is amazing that a young boy is here and is ours.

“But if we had needed three tries on the credit card then there would have been absolutely no chance of Grayson being born.”

Husband John, 33, a bank worker, said: “Everything feels like it should be and we have settled into family life. Any time Grayson does something new we try to take a picture of it so we don’t miss any moment.

“It is just quite hard to think of a time when he wasn’t here.”

We’ll take a look at the main points of your story. One of our friendly writers will contact you to discuss your story in more detail and give you a valuation of what it’s likely to be worth, based on similar stories.

Our service won’t cost you a penny.  We’re here to help you get the best experience from sharing your story.

We’re not just seeking your surrogacy story. We provide the world press with stories, photos and videos every single day. If you have any newsworthy story, photo or video, we want to hear from you.  We cover every type of story, supplying up to 20% of all news content in the print press.

See our Sell My Story to the media page for more information.

If you’re trying to submit photos or videos, and are having trouble, visit our dedicated picture and video sites. Here you’ll find uploading and sending photos and videos very easy: