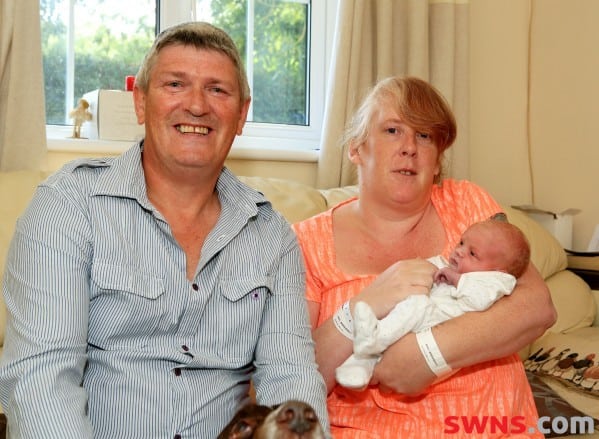 Amazed Amanda Ross has given birth to her first baby – just 15 HOURS after discovering she was pregnant.

The 41 year-old was out shopping with partner Paul Dean when she suddenly developed stomach cramps. She had been feeling bloated and blamed it on constipation and went to her local health centre to see a GP. They referred her to a midwife who gave her a scan – and told her she was probably seven or eight months pregnant.  The couple’s surprise baby was due in a matter of weeks.

Amanda was sent home with some medication for her stomach but at 1.30am told Paul she had to get straight to hospital as her tummy was rumbling. Paul, who has two children and two grandchildren from his first marriage, drove Amanda to the nearest hospital. She was quickly checked and immediately transferred by ambulance to the maternity unit at Southmead Hospital in Bristol.

Amanda arrived there at 5.30am where a monitor found the unborn baby’s heartbeat dipping dangerously. Doctors performed a caesarean section and daughter Chloe was born 80 minutes later weighing 4lb 9oz. Amanda, who has never been pregnant before, was kept in hospital for six days before being allowed home to their two-bedroom flat in Yate, South Glos.

She said: “My first reaction when they told me I was pregnant was one of sheer terror.

“It was a massive shock and I still can’t believe it. It’s going to get some getting used to.”

“We were totally unprepared for a new baby – we hadn’t even got a cotton bud.

“Thankfully our families have been really good, running around to get everything we need.”

Stunned Paul, 53, has been with Amanda for 14 years and neither of them work. He is already dad to Andrew, 34, and daughter Jessica, 32.

He said: “I thought ‘where the hell did that come from?’

“She’s had no pains or cravings or stomach aches, nothing.

“I’m still in shock and the reality has yet to sink in. It’s going to take some getting used to.”