SISTERS TEXT EACH OTHER EVERY 10 MINUTES DURING SIMULTANEOUS LABOUR!

ERICA AND HELLENA HAVE BEEN INSEPARABLE SISTERS THEIR ENTIRE LIVES.

SO WHEN THE PAIR FOUND OUT THEY WERE PREGNANT AT THE SAME TIME, THEY WERE OVERJOYED TO SHARE THE EXPERIENCE.

BUT THEY UNEXPECTEDLY WENT INTO LABOUR ON THE SAME DAY.

AND WHILE OTHER MUMS WERE HOWLING IN AGONY THE SISTERS TEXTED EACH OTHER WITH UPDATES DURING EVERY CONTRACTION, PUSH AND SPINE TINGLING SCREAM DURING THE 10-HOUR BIRTHS! 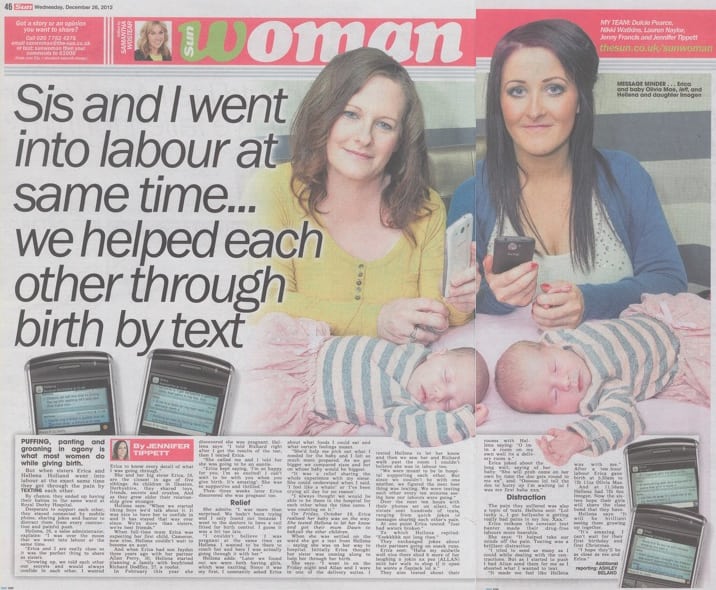 Erica, 28, and Hellena, 26, were the closest in age out of five siblings and counted on each other for everything.

They were more than just sisters, they were best friends.

When Hellena found out she was pregnant, the first person she told besides her partner Richard, 27, was her sister. She knew Erica would support her throughout her first pregnancy.

But three weeks later the sisters got a surprise when Erica learned she was pregnant too.

The pair leaned on one another throughout their pregnancies, visiting hospital together and comparing notes on their babies.

The sisters were expected to give birth at least a week apart but when Hellena went to hospital early with contractions, she thought she’d be the first to give birth.

“I thought Hellena was going to be much later than me because it is her first child,” Erica said.

“I went in on Friday night and my partner Allan [30] and I were in one of the delivery suites. I texted Hellena to let her know and then we kept in contact through text to stay updated.

“I couldn’t believe she was in labour too. We were supposed to actually be in hospital supporting each other but since we couldn’t be with one another, we figured the next best thing was texting.

“We texted each other every ten minutes, checking on each other and seeing how our labours were going.

“We would make jokes and it really helped take our minds off the pain sometimes.

“Texting was a brilliant distraction.

“I tried to send as many as I could while dealing with the contractions, but as I started to push I had Allan send them for me as I shouted what I wanted to text.

“It made me feel like Hellena was right there with me.”

Some of the banter through the texts included jokes about making Erica wait and sending their partners on snack runs.

These included: “Just had waters broken”;

“Haha my midwive well nice there shud b more of her laughing n jokin xx pez [Allan] mite hav walk to shop if it open he wants a flapjack lol x”;

Grandmother Dawn was frantic, bouncing from room to room to try and keep up with her daughters’ labours.

At one point the sisters could actually hear each other’s screams down the ward.

Erica was the first to give birth after a toe curling 10-hour labour at 5:20am. Olivia Mae weighed 7lb 11oz.

Hellena wanted to be by her sister’s side but she was struggling with her own labour so Erica asked Dawn to text a picture of Olivia so she could meet her new niece.

Hellena finally gave birth to Imogen also after 10 hours at 11:58am. She weighed just six ounces less than her cousin.

Hellena said: “We were the talk of the hospital and the nurses were saying they couldn’t believe it.”

Now Erica and Hellena can’t wait for their daughters to share birthdays together and are sure they will be just as close as their mums.

“It is going to be brilliant them growing up together,” Hellena said. “I was telling my mum I can’t wait for their birthday ad first Christmas. It’s lovely and I hope they’ll be as close and me and Erica.”

If you have a story to sell to a national magazine or newspaper, please visit our How to sell my story to the press page .