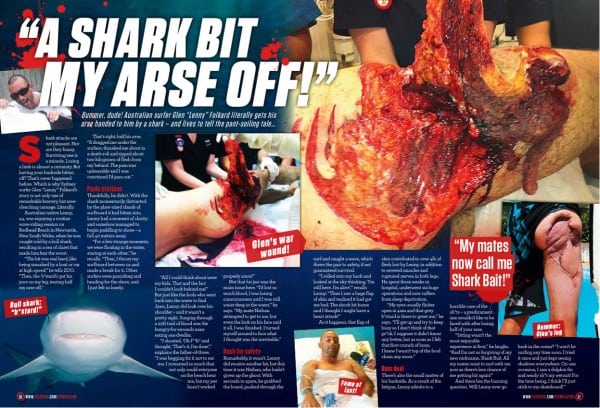 Shark Attack! When Sellusyourstory.com heard about Glen Folkard’s story, we couldn’t quite believe our ears.  Glen was attacked by a shark whilst surfing off the Australian coast.  The graphic and shocking details of his account are enough to make even the hardiest stomach turn. We helped Glen get his story told as an exclusive in Zoo Magazine and Real People Maazine.  Read Glen’s story below…

The impact came from out of nowhere, like being hit by a speeding car. Then came the crunch of bone, a ‘popping’ sound and the sudden loss of weight as litres of blood poured out of his leg and into the jaws of the shark that had hold of him.

Lenny Folkard 44, had gone down to the surf to get some waves in after a particularly gruelling day inking his pals up at his seaside tattoo parlour in Sydney, Australia. Out on the swells waiting for a wave, the impact came. “The hit was real hard,” Lenny told Zoo, slamming his fist into his open palm so we get the idea. “It was like being hit by a boat or car at high speed. Then I’m in the water and the bastard’s got his jaws on my leg, tearing half my arse off.”

Lenny had been hit by a Bull Shark. Known for their aggressive behaviour and stalking the shallows, it had picked Lenny out as the ideal canapé. Their modus operandi is to hit hard and then start chomping. Rump steak.

Dragged under the surface, the beast did just that, ripping 2kgs of flesh from Lenny’s backside as it thrashed him about in a death-roll.  “I felt the crunch of bone as his teeth struck my femur – the pain was unbearable. I thought I was going to pass out,” says the father-of-three. “At the same time I was thanking God he didn’t get me below the knee. That would have cost me my  foot for sure.”

Along with most of Lenny’s arse cheek, the beast had taken a plate-sized chunk of surfboard with him, and the fibreglass had caught in its teeth. “He spat me out then and for a strange few moments we were just floating in the water staring at each other,” says Lenny.

It was a naked lunch moment for both man and beast when Lenny had the bright idea that he shouldn’t hang around waiting for the man-eater to blink first. In a moment where thoughts about death were foremost in his mind, Lenny was able to focus on living. Pulling on his leg-rope, he thrust the surfboard between them and dragged himself weakly onto it.

Shock and massive blood loss was happening fast and he was rapidly getting weaker. Hanging onto the board with what little strength he had left, he started paddling to shore which was over 40 metres away. “I was looking at surfers panicking en masse and heading for the shoreline and I remember feeling very lonely. I’ll never forget that moment. It confirmed what was happening behind me – but I couldn’t look. I just kept thinking of my kids. But the urge to look over his shoulder got the better of him.

In his wake, like the blood-bait off a big game fishing boat, was a 1ft wide, 20ft long blood trail thick in the water. “I thought, ‘Shit, he’s got my femoral artery. That’s it, I’m done.’” Then, about 10ft away the Bull shark surged through the bloody stream toward him. Starting to panic, Lenny’s voice could be heard from the shore. “Fuuuuuuuuuuuuck!”

“I started cursing at the thing for trying to eat me,” he says. “I screamed so much, begging him not to eat me that my jaw hasn’t worked properly since.”

As he paddled frantically through the water, he noticed his friend, Nathan Visscher wading through the water towards him. But then Nathan slowed down. “He saw the shark behind me and the look on his face said it all: ‘that’s it for Lenny. There’s no point in me getting involved too’.”

Succumbing to blood-loss, loss of consciousness and what seemed like the inevitable, Lenny turned himself around on his board to face the music (cue Jaws theme). The half-metre long dorsal fin was even closer now and Lenny was still waist deep in water. Then, on his left shoulder came a thump. It was Nathan’s hand. His pal had come through for him.He grabbed hold of the board and began pushing Lenny through the surf toward the shore when a huge wave came in and threw them both onto the sand and to safety.

“I rolled off the board and onto my back and looked at the sky thinking, ‘I’m still here. I’m alive’. I found out later that the bastard was inches from having another go just as we reached the shore.”

Out of the mouth of the beast but nowhere near out of the woods, Lenny looked down at his leg as paramedics from all sides rushed to his aid. “I saw a huge flap of skin and realised he got me a beauty – then the shock hit me and I think great, I beat the bugger at his own game and now I’m going to die from a heart attack.” Paramedics gave him oxygen, tied a tourniquet around his thigh and jammed a thumb into his femoral artery as they worked to keep him alive until the ambulance arrived.

Lenny was thrown in the back of a meat wagon and rushed to the hospital where he spent three weeks cracking jokes on morphine in between six massive operations. Lenny lost over 4lbs of flesh but the cheek of it was he lost half his arse, making sitting down almost impossible. Inside the leg, his muscles are severed and nerves are just sticking out causing a lot of electrical jumping.

“I reckon I’m somewhere between 60-70 per cent of my old capacity,” he says. “Afternoons are the hardest. I fatigue from 12pm onwards and by 4pm I’ve got the shits pretty bad. This is from not being able to sleep properly. My eyes usually flick open at 4am and that grey bastard is there to greet me so I’ll get up and try to keep busy so I don’t think of that prick.”

Despite this, Lenny doesn’t hold a grudge against the shark that gored him. “He didn’t know any better, it was just a case of mistaken identity,” he says. “I knew then and there on that wave that I wasn’t at the top of the food chain anymore. But I’m not so forgiving of my new nickname: ‘Shark Bait’.

“All my mates want to surf with me now as there’s less chance of me getting hit again. But I won’t be surfing anytime soon. I tried it once and just kept seeing shadows everywhere. I saw a dolphin fin and nearly shit my wetsuit… not good! I’m going to ride a skateboard for a while, maybe.”

If you have an unbelievable or shocking story that you would like to sell to the press, let us know today.  SWNS is the largest press agency in the UK and we cannot be beaten in terms of payments for your story, or reach.

We can sell your story exclusively to one publication for the maximum fee, or we can release your story to every magazine and newspaper in the country…  or we can do both.  You’ll stay in control every step of the way and you’ll have a personal contact (one of our trained writers) who will look after you throughout the process.  To learn more about selling your story to the entire national press read our Sell My Story to the Entire Press page.

If you would like to submit a story to us and find out what it’s worth, simply tell us a few details by filling out the form on the right hand side of this page.  Someone will get straight back to you with a fee estimate.  See what your story is worth!