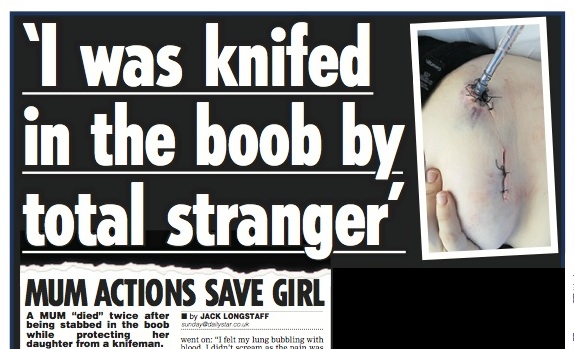 If you’ve been searching ‘Sell story to the media’, you’ve arrived at the right website!

SellUsYourStory.com is part of the UK’s largest independent press agency. We help members of the public get the highest fee possible for sharing their stories with the media.

Sell Story to the Media in minutes

SellUsYourStory.com helps thousands of people appear in the press each month.

We’re looking for all types of stories, happy, sad, amazing, or unbelievable. Recently we helped Tracy, a mum who was left fighting for her life after she stepped in between a knifeman and her daughter – and was stabbed through the boob.

Tracy Larkowski, 37, had to be resuscitated twice after the blade was plunged into her left breast, shattering several ribs and puncturing her lung.

The random attack happened outside a supermarket at around 8pm when the mum-of-nine went to pick up her 15-year-old daughter Shakira.

She claims the unknown man “came out of nowhere” and lunged towards her daughter, so she pushed the teenager out of the way, in Basildon, Essex.

But the blade went through her breast and out the other side, and her friend bundled her into the car and raced to the hospital where she “died” twice.

A 22-year-old man was arrested on suspicion of grievous bodily harm with intent and was later released under investigation, pending further enquiries.

The chef is calling on authorities to do more to tackle knife crime.

She said: “I died twice in A&E. My chest needed draining and my lung had to be re-inflated.

“My left lung had collapsed and needed to be stitched up just under my heart. He aimed for my heart.

“How I’m still alive I will never know. There must have been a guardian angel looking over me that day.

“I feel so lucky. I don’t know how I am still alive, even my surgeon said that.

“We need to set up a knife programme in Basildon to try and educate as many people as possible.

“It’s not just the person who has been stabbed who is affected by this terrible behaviour.

“It’s also the family and friends and the little children waiting for you to return home.”

Tracy and her friend Paul, 50, drove to pick up Shakira from outside the Co-op on October 7, because the teenager was scared after someone – not the knifeman – had picked a fight on her friend.

Mum and daughter were walking back to the car when he “came out of nowhere”.

She added: “He went straight for my daughter. I saw his knife before I saw his face and he had every intention to stab my baby girl.”

Instinct took over, and she pushed her daughter – knocking her out of the way and to the floor.

“Before I realised, before I had a chance to turn around or run away, he stuck the knife through my back and ran off,” said Tracy, who said nobody in the family recognised the man.

The blade sliced through her left breast, shattered several ribs, punctured her lung and just missed her heart before creating a gruesome exit hole in her chest.

Tracy said her lung began to fill with blood and she faced a life-or-death race to hospital.

“I felt it bubbling with blood. I didn’t scream because the pain was phenomenal”, she said.

“It was the worst feeling in the world. My lung was filling up with blood and I tried keep breathing.

Tracy was rushed to the Basildon University Hospital by her friend because she was just a few minutes away from the hospital and the journey only took around four minutes.

Paul pulled into the A&E’s ambulance drop off zone and called out for help.

Tracy says all she can remember is “coughing up blood” and seeing blood at her feet in hospital.

She had to be resuscitated twice after losing pints of blood through open wounds in her chest, she said.

“If I had waited for an ambulance I probably would have bled out on the street,” she said.

Doctors inserted a plastic drain into Tracy’s lung to drain out the blood and she still requires weekly check ups at hospital to monitor her breathing.

Tracy spent more than three weeks in hospital and had two operations and four blood transfusions.

Tracy told us: “It’s like a living hell for me. Every time I close my eyes I do relive it. I suffer with anxiety. It really has been horrible.

Tracy said she will be “forever grateful” to the surgeons, doctors and medics who saved her life.

She said: “I can’t thank them enough and I couldn’t possibly repay them.

An Essex Police spokesperson said: “A 22-year-old man from Basildon was arrested on suspicion of grievous bodily harm with intent at around 4.10am the following morning and was later released under investigation, pending further enquiries.”

Why sell a story to the media

Tracy decided to sell a story to the media to raise awareness of the crime and earn some money whilst recovering.

If you would like to raise awareness about an issue or cause, simply fill out the Story Valuation form on this page.

You can find out more about how to sell story to the media on our Sell My Story page.