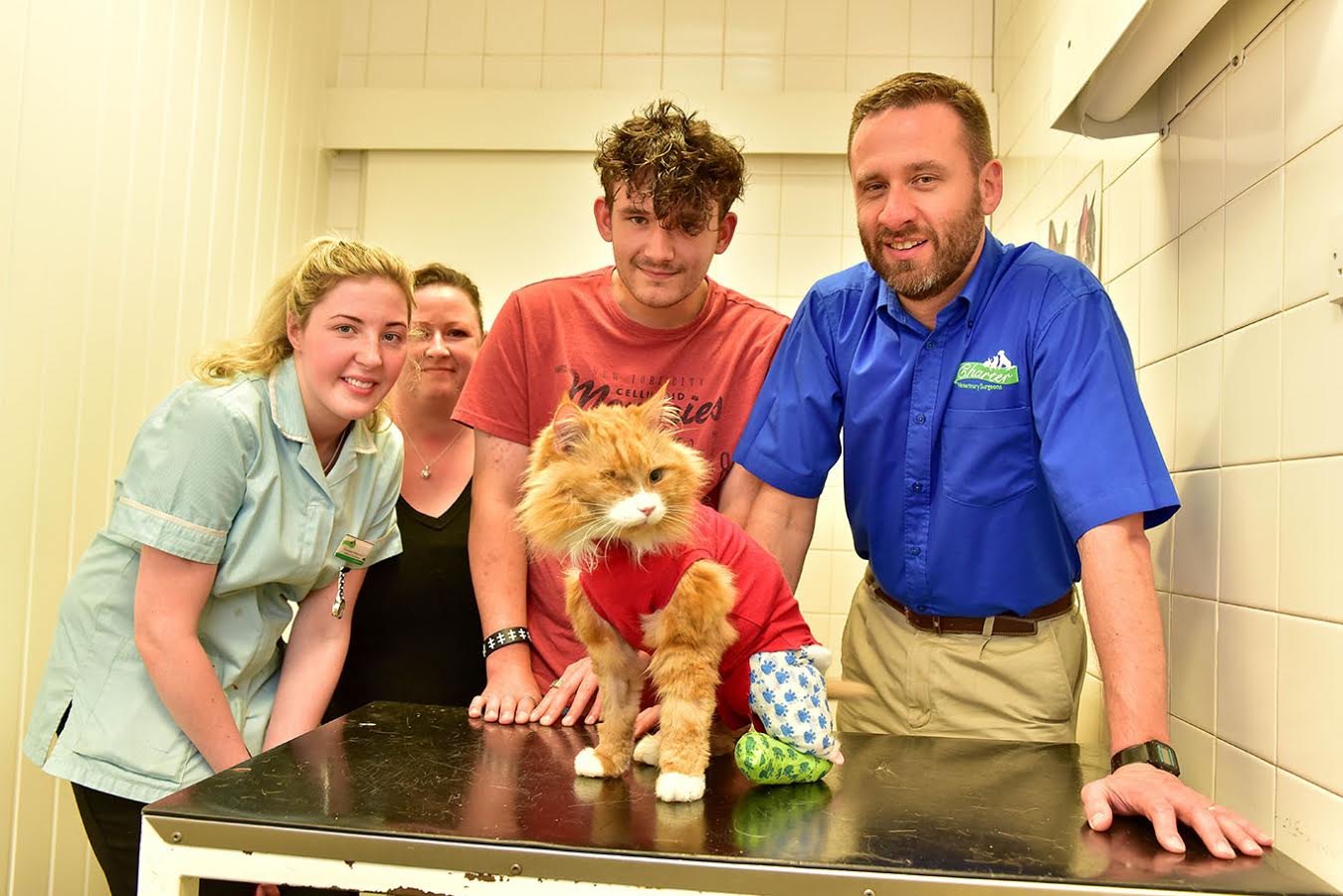 Sell my pet story: Would you like to get your amazing pet in the press?

SellUsYourStory.com was contacted by Katrin after her pawfect pooch made an incredible recover after being caught in a car bonnet! Katrin asked ‘how do I sell my pet story?’ and we had all the answers.

SellUsYourStory.com is part of the largest press agency in the UK and we specialise in helping people share their stories. We  ensure that you get the most money possible. Our service is completely free.

Find out how to get your amazing pet in the press by contacting us today. Simply fill out our Story Valuation form, and one of our friendly team will get back to you. Alternatively, call our story hotline on the number above.

Have you got a clever pet, or a different story you think would make a good magazine article? Get in touch and get your amazing pet in the press now!

SellUsYourStory.com helped Katrin share her story about the adorable cat Rooney who went on a 150 mile trip on a car engine. We helped Katrin secure a great fee for telling her story over the phone to one of our trained writers…

Waiting for the answer phone beep to kick in, I left a polite message and waited to hear back. Giving a small sigh and consulting my list, I dialled the next number.

I had been ringing round to friends and neighbours all afternoon, hoping that we’d be able to find homes for a new litter of kittens.

I had adopted Sassy, a female stray cat the year before, and had no idea if she was spayed or not… that question was well and truly answered when she became pregnant.

I had planned to give the whole litter away, but as the adoption offers came in thick and fast, my son Gabriel, then eight, came to me with a very worried look on his face. ‘Mummy, I think I’d like to keep a kitten please, I’ve made friends with him already,’ he said.

Up against his sweet little face and quivering lip it was hard to say no, and they were all adorable.

When he showed me which little fluff ball he had decided we had to keep, I was bemused as it certainly wasn’t the one that I’d have chosen. But Gabriel was adamant.

Ronney, Gabriel’s new kitten, turned out to be quite a character. He was extremely playful and loved running off with things, especially my scarves or fancy-dress feather bowers.

One morning Gabriel and Ronney were playing fetch. ‘You know mum?’ he said with a smile. ‘Ronney’s really much more like a dog isn’t he?’

And he was right, as aside from being playful, Ronney had a habit of following us around the house and was a very loyal loving little companion. And, as he grew up, he became a very handsome young cat – plumes of ginger fluff contributing to a very attractive look.

Sadly he’d had to have an eye removed due to an ongoing infection, but he carried it off well and recovered at lightning speed.

Ronney was adventurous but only to a point, I found that if his cat flap was blocked or locked in anyway, meaning that he couldn’t get back inside our house, he tended to freeze. He would stand stock still, and even after being called wouldn’t budge an inch.

Ronny was a character

On one occasion I had to scale a neighbour’s fence to physically carry him back inside.

‘We must make sure to keep an eye on him,’ I warned Gabriel. ‘I not sure he’s very good at getting himself back home.’

And so when we struggled to find him earlier this year, we were straight out searching for him, up and down the street. We checked under bins, in recycling boxes, under cars and up trees. After having no luck that day we went out the next day but still no sign of Ronney.

Gabriel, now 20, even made posters but days passed and he was still missing. I was beginning to give up hope, until one afternoon there was a knock at the door. A red plastic toy box was thrust under my nose by my neighbour, Steve.

‘I think I might have something that belongs to you,’ he began…

Looking down I could see a little curled up ball of orange fluff. ‘Ronney,’ I whispered, scared to startle him.

Inviting Steve in for a cup of tea, he told me that Ronney had been found after a 150 mile journey, from where we live in Stoke, to Gloucestershire!

He’d been sitting in the engine of the car and looked very grubby but more importantly, he was clearly not himself, I thought he must be traumatised. I thought the shock might wear off now he was home but the next day he was no better so I took him to our lovely local vets, Charter Veterinary Surgery in Newcastle under Lyme.

It was only when they clipped his hair that we realised he also had injuries. He had a limp from where the pads of his feet had been singed off by the heat of the engine, his tail was so burned that it had turned brittle and part of it eventually had to be amputated.

After taking him home with some antibiotics I started seeing a marked improvement in him. ‘I think he’s going to be ok,’ I trilled to Gabriel, who looked less certain. ‘He just doesn’t seem himself yet. Poor puss.’

We both fussed over Ronny and kept a close eye on him, hoping for continued improvement. But the next morning when I tried to get him to eat something, he refused.

As the hours ticked by, he seemed to go downhill and not wanting to take any chances we rushed him back to our trusty vets. They gave him a thorough examination and found that he was much more badly burnt then we had first suspected. ‘He’s actually gone into septic shock,’ the vet said gravely.

And so the next weeks were critical for Ronney. He stayed on full time at the vets so that he could have round the clock treatment. The nurses were fantastic and tended to his wounds daily. He had even been treated with Manuka honey, famed for it’s healing properties, which sped up his recovery by miles.

The cat flap will always be open for Ronney

One of the vet nurses told me that had Ronney not had such a placid temperament that he would most likely have been put down as the constant treatments would have given most cats dreadful anxiety, it just wouldn’t have been fair.

But our brave Ronney was reportedly purring throughout even the most intrusive of procedures.

Now Ronney is on the mend and we can’t wait to have our boy home, he’s going to be treated like a king, and the cat flap will stay well and truly open.

Q: I want to sell my pet story, what’s the next step?

A: Simply fill out the online story valuation form on this page, or call our story hotline. Our service won’t cost you a penny.

One of our friendly, trained writers will get back to you straight away. There is no obligation and we’ll never use anything you send us until you give us the go-ahead.

Learn more about how to sell a story on our sell my story page. Or see more examples of pet and animal stories we’ve helped place in the press here.