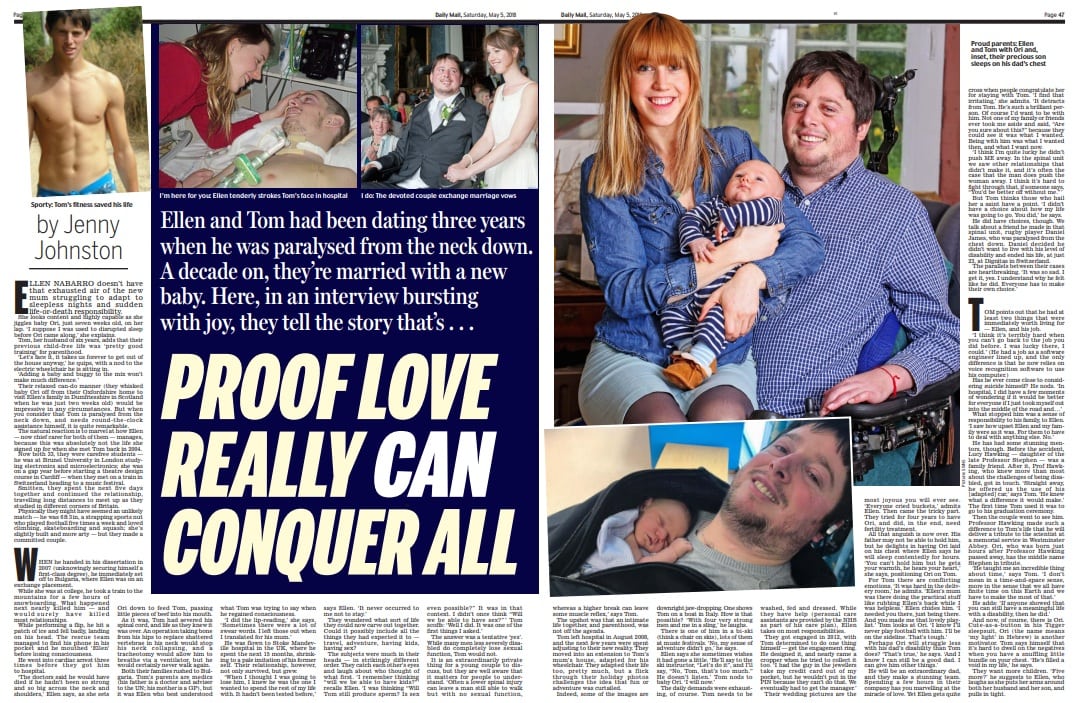 Have you ever thought, ‘I want to sell my inspirational story and help others in a similar situation’?

SellUsYourStory.com is part of SWNS, the UK’s largest independent press agency. Every day we help people share their stories, photos and videos with the country’s top magazines and newspapers. We guarantee the highest fees. More importantly, we ensure your story is told YOUR way.

Simply fill out the valuation form on this page to tell us the main points of your story. If your story looks suitable for print, one of our writers will contact you to find out more.  Nothing you send us will ever be used or published without your permission.

Sell my inspirational story to a magazine or newspaper

This week we helped Tom and Ellen Nabarro share their inspirational story. Tom was paralysed from the neck down in an snowboarding accident. After fearing he would never have children, Tom has shared his joy at becoming a father.

We arranged an exclusive deal with Femail Magazine, who offered to pay the highest fee for Tom and Ellen’s story.

Read Tom and Ellen’s story below. Or if you’re thinking ‘I want to sell my inspirational story and would like to know what it’s worth’, get in touch with us today!

A tetrplegic man who feared he’d never have children after he was paralysed from the neck down in a snowboarding accident has told of his joy of becoming a father.

Tom and Ellen Nabarro, both 33, worried they may never have a family after he severed his spinal cord and shattered two vertebrae in his neck in April 2007.

The accident left him wheelchair-bound, unable to move from the shoulders down, and without sensation or voluntary movement in his limbs.

Their little boy Ori – whose name means ‘my light’ in Hebrew – arrived in March.

And like any other first-time dad, Tom was at his wife’s side for the birth and has a new-found admiration for his wife.

Tom said he is unable to do many of the things most parents take for granted – but instead focuses on finding things he can do.

He got his first skin-to-skin contact thanks to a baggy hoodie, allowing him to cuddle Ori “like a little kangaroo”.

He hums while Ori lies on his tummy, enjoying the now-familiar soothing vibrations and loves reading him stories.

The things most parents take for granted

Proud Tom from Standlake, Oxfordshire, said: “Not being able to have children was one of the things I worried about most post-injury.

“So to finally have a baby of our own is absolutely incredible.

“We have been enjoying every moment with our son so far – every squawk, gurgle or piglet-like noise.

“He enchants everyone who sees him.

“Ori lets us know what he needs very efficiently, whether he wants to fart, burp or feed.

“He is gaining weight very nicely and sleeping for long lengths of time.

“We are very, very happy.

“We are focusing on the things I can do – like reading him stories, having him lie on my belly and listen to my voice. He definitely recognises my voice when I speak.

“I would never have thought I could admire my wife any more than I did already. But witnessing the process of birthing another human has added another dimension of appreciation that I never knew existed.”

Tom almost died when he dislocated his neck. He suffered three cardiac arrests and was left unconscious for three weeks after his snowboarding fall in Bulgaria in 2007.

He spent over a year in Stoke Mandeville Hospital, Aylesbury, Buckinghamshire. His loving partner, Ellen, was by his side.

In 2008, Tom was finally discharged and he and Ellen moved into a wheelchair-adapted extension in Standlake, Oxfordshire.

Tom proposed in October 2010 and the couple tied the knot in an emotional ceremony in the summer of 2012 attended by many of the nurses who cared for him.

Tom’s condition hasn’t prevented the pair from having a normal sex life but they worried it might not be possible.

“At the beginning – because it goes in stages through rehab for spinal surgery – my immediate worries were focused around my health,” Tom explained.

“But after a little time and as I started to recover, I began to think about the future. I asked doctors those kinds of questions about Ellen and I being able to conceive.

“Ellen and I had talked about having children. It was something we’d always dreamed of.

Life has never been simple

“We spent a few years focusing on our careers and enjoying our active social lives before we started trying for a baby, but life has never been simple.

“Most doctors were quite positive, but you don’t necessarily believe it can happen.

“Of course, they are hopeful, but it’s not until you talk to people who have been through a similar position that you start to think it might be possible.

“When we found out Ellen was pregnant we were so happy and we just felt a huge sense of relief.

“There was the shock of ‘this is actually going to happen’.

“She had wanted us to have children for a few years and it was hard seeing friends and family become pregnant.

The reality didn’t really hit us for a little while

“When we did conceive the reality didn’t really hit us for a little while.”

Ellen added: “I had a great pregnancy. Thankfully I didn’t suffer too much sickness. We decided to keep the baby’s gender as a surprise.”

Ellen was induced after her due date came and went. Following an 18-hour labour with Tom by her side, little Ori was born naturally at John Radcliffe Hospital, in Headington, Oxford, at 4.54am on March 14, weighing 7lbs 6oz.

“When he arrived and we heard him let out his first gasp for air. It was such a very special moment,” Tom said.

The couple were able to experience skin-on-skin contact with their newborn straight away. Ori was placed on Ellen’s chest first.

“My mum and dad were waiting in the hospital so I went to update them and let them know the baby had arrived,” Tom said.

“They helped me into a baggy hoodie. When I went back into the room one of the nurses placed Ori on me in my hoodie like a little kangaroo.

“It was such an emotional moment.

“The nurses kept saying to me: ‘He’s really cute, even though he’s got your nose.’

“Ori definitely looks like both of us – with Ellen’s lips and my distinctive nose.”

Little Ori had a tough start after chest x-rays and blood tests revealed he had meningitis, but he responded to antibiotic treatments.

After spending a week in hospital, Tom and Ellen were able to take baby boy home and thankfully the tiny tot is now the picture of health.

The Nabarro’s are now adapting to their new life as a family of three.

Tom longs to be able to scoop up his son and soothe him when he cries, to rock him gently or stroke his face – but is finding his own ways of bonding.

“I’m finding the physical limitations imposed by disability difficult with regard to parental interactions,” he said.

“I would love to hold and cuddle Ori in a hands-on fashion but instead we are maximising the time spent skin-to-skin.

“It does feel like he is relaxed when we are together and enjoys the vibrations when I hum.

“He seems to like lying on my comfortable soft belly.”

Ellen and Tom have sweetly nicknamed their little boy ‘BOJ’. It stands for bundle of joy. The pair hope to add to their brood in the future.

Tom said: “Ori is very beautiful and extremely alert. He focuses on faces now over around a metre away and he generates all sorts of noises that make me smile.

“He is giving joy to everyone he meets and has therefore has picked up a new nickname BOJ – bundle of joy.”

How do I sell my inspirational story?

Simply complete the story valuation form on this page. One of our team will get in touch once we’ve reviewed the main points of your story.

As you can imagine, we receive hundreds of submissions every day. Our team of writers need to screen the main points of your story to see if it sounds suitable for a magazine or newspaper story. If it does, we’ll call you straight back.

We’re looking for all types of human-interest stories, not just inspirational ones.

If you would like to find out more about the story selling process, see our Sell My Story page.