Sell My Diet Story: I lost 14st after ditching 1000 litres of fizzy pop a year

Achieved something amazing and have been thinking ‘how do I sell my diet story‘ to inspire others and earn some extra cash? Contact us today using the Story Valuation form on this page.

We guarantee to secure you the highest fee possible when securing you a suitable magazine publishing deal.  We’ll do all of the hard work for you, all you’ll need to do is tell us your story over the phone, send us some photos (and maybe pose for some news ones) and then approve the final version of the story.

This week we helped SellUsYourStory.com client Kelly Foulds secure a front page newspaper deal when she contacted us after searching ‘How do I sell my diet story?’

About to settle on the sofa in front of the telly, Kelly Foulds caught side of a slender, dark-haired woman in the mirror. She was holding a glass of juice and looked happy. It was her.

Usually by this time Kelly would be finishing a two litre bottle of Sprite, halfway through a family bag of crisps or chocolate. Then, she would start to hate herself before cracking open another litre bottle to perk her mood.

Kelly, 38, said: “It was a vicious cycle that I relived every night, for as long as I could remember.

“My full-fat fizzy pop habit felt impossible to kick as I relied on it to lift my spirits as I was so miserable.”

By the time Kelly was 15 years old, she was a whopping size 16. Despite desperate efforts from her parents, they couldn’t control what she ate at school – especially the steaming portion of chips she bought every lunchtime.

“Surprisingly I wasn’t bullied, but I was miserable,” Kelly said.

“I used pop and food as comfort – even as a child, if I was stressed or unhappy I would drink.

“I didn’t event think about my size 34 frame until I looked back and started to change my life.”

That was six years ago when Kelly couldn’t even walk with the weight of her massive body. At 27st 7lbs,  Kelly refused to get into any pictures, except the dreaded family Christmas photos or those taken without her realising.

Kelly, from Derby, said: “One day, when I visited my doctors about my wheezing chest and excruciating back pain, he took one look at me and told me it was bad. 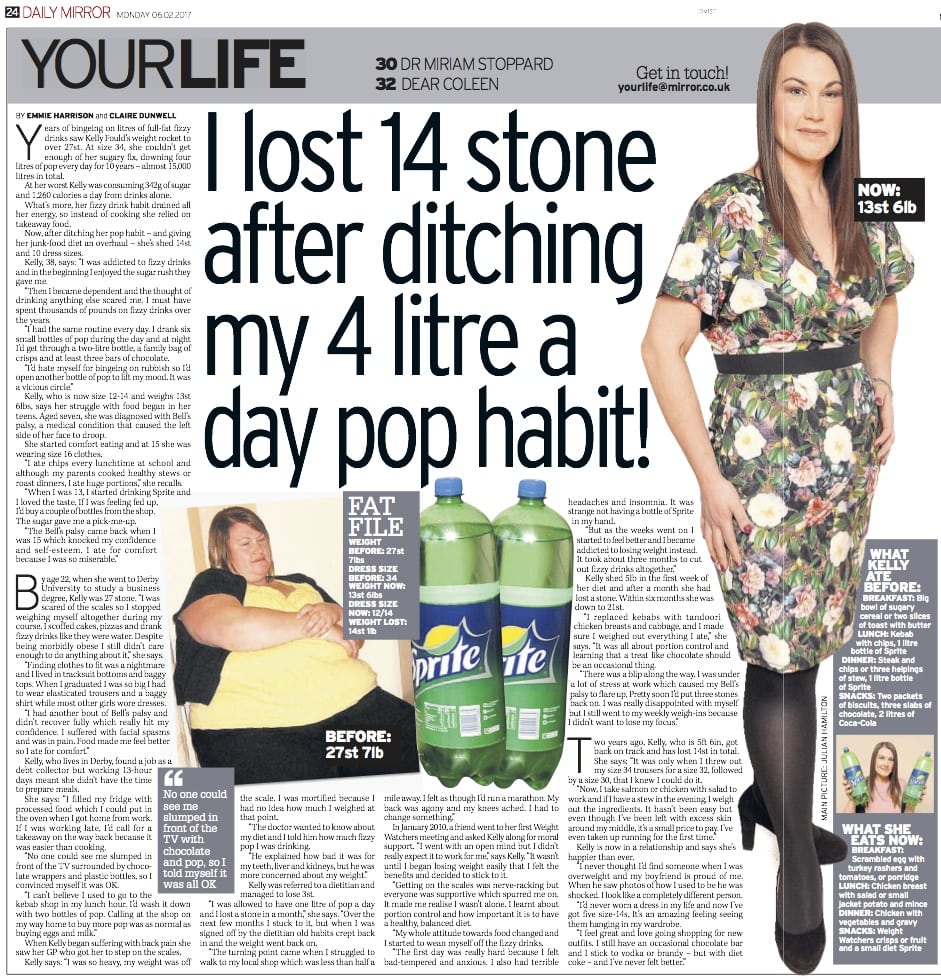 “When I moved out and went to University at 22, I had full control. I scoffed cakes, cheesy pizzas and downed the fizzy pop like it was water.

“Moving out of home meant that no one could judge me packing out my fridge with sugary drinks and saturated fats.

“No one would see me slumped in front of the sofa surrounded by crumbs and plastic bottles.”

When Kelly finished University, a stressful job as a debt collector meant that she scoffed down kebabs every lunchtime and went home to hit the bottle after a long, 13 hour day.

Kelly’s self-confidence was already low from being diagnosed with Bells Palsy at seven years old. The condition causes your facial muscles to sink, leaving your cheeks and smile drooping.

It struck again when she was 14, then again at 22. On the third occasion, she didn’t fully recover and ended up with facial palsy affecting a quarter of her face.

She added: “I suffered with facial spasms and tightening of the muscles so it gave me a lot of pain. I was given medication that was terrible and didn’t really work.

“The medication held the weight. My self esteem plummeted even further after that and I developed my full-fat drinking habit.”

At lunchtime everyday Kelly would automatically pick up a 500ml bottle of full fat, full sugar Sprite or Coke, and then another. And another.

“On the way home from work, I picked up a two litre bottle of full fat pop like it was as normal as eggs or milk, and polish that off without a second thought.

“I was in my twenties and I didn’t even know my weight as I went over the scales at the doctors, who recommended a dietitian.

“But, ignoring his advice, by the time I was 30 I was breathless, had aching joints, bad knees and finished four litres of pop a day.”

In January 2010, Kelly’s friend convinced her to tag along with her to Weight Watchers as moral support for her first meeting. Little did she know that she’d never look back.

Kelly said: “The group made me realise that I wasn’t alone in facing my weight demons.

“I looked forward to sharing gossip and new meal ideas every Thursday with my new friends.”

At that time, all of Kelly’s friends were settling down with their new partners and new lives, and she was cradling fizzy pop like it was her baby.

“I was desperate to love myself before I could love someone else, but the sight of my spare tyres in the mirror made me just want to cry and drink more,” she added tearfully.

“My leader was amazing and I’ve made some special friends in my group. They kept supporting me and encouraging me to come back as we both knew if I didn’t, I would’ve drank myself to death.”

“We all support each other. No one can do it without support. Yes, you have to do it yourself but we all need someone to motivate and support us.”

In total. Kelly was drinking around 1,000 litres of full fat, full sugar Sprite in just one year.

The servings of a one litre bottle of fizzy pop is enough for three people, totaling at 342g of sugar and a whopping 1,260 calories – every night!

Now, six years later Kelly is a svelte size 12 and has lost a staggering 14st, settling at a healthy 13st 6lbs.

Kelly said, “I swapped fizzy pop for non sugar juice, my favourite is apple and blackcurrant, and I started grazing on fruit for snacks.”

And her secret for beating a sweet-tooth?

“Peach slices!” she laughs. “If on an evening I fancy something extra, they’re my saving grace.”

Instead of her deadly dose of kebab for lunch,  Kelly will take salmon salad to work and make sure her protein-heavy dinner of chicken and vegetables was already prepared for when she got home.

“Of course, it was not easy,” she added.

“I was tired and irritable from the severe lack of sugar as my body was so addicted.

“I’ve never felt a normal size and now I am one. Society can be cruel at times but we have to change our mind set as we have to be happy.

“Normal is a cruel word but I have to be realistic in saying that not being able to fasten a seat belt on a plane, or only having one shop to buy clothes from wasn’t normal.

“Now, I feel great and love shopping around to get dressed up on nights out with the girls. I don’t punish myself for food either as I will snack on a Kit Kat and I do enjoy a tipple. I’ve even taken up running which I’ve never done before!”

It has come with it’s down points though as gorgeous Kelly has been left with excess skin from losing the equivalent of a baby rhino.

“I was thinking about getting my boobs done as a 40th birthday present, but it would be for me and not for the approval of anyone else,” she laughed.

“I’m learning to believe that I’m a happy, healthy young woman who has saved her life from going pop!

“I nearly drowned myself with Sprite, but now I’m living life to the full, without the fat.”

Right now, Kelly is single but happy and ready to mingle – you could say she’s went from full-fat to bubbly babe.

BREAKFAST: Big bowl of sugary cereal or two slices of toast with butter

BREAKFAST: Scrambled egg with turkey rashers and tomatoes or porridge

DINNER: Chicken with vegetables and gravy

For more information see our Sell My Story page.  Or if you would like to find other ways of contacting us, see our Contact Us page.