Dark Knight in Shining Armour! We love a romantic story, but we love a fantastic proposal story even more!!

If you have a quirky, bonkers or entirely different proposal story, get in touch with us and we’ll put it in a magazine or newspaper for you…  the best part is that you’ll get paid.  Valuable contributions towards the looming big day! 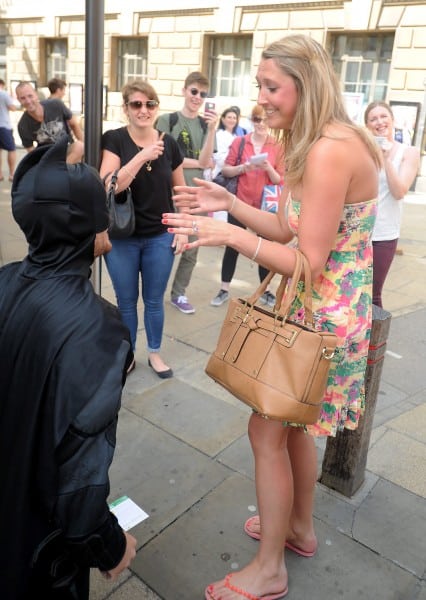 As I walked through the Guildhall shopping centre in Stafford with my best friend Hayley, 27, my head pounded.

“I can’t believe you’ve dragged me out after last night,” I said.

We’d been to the Wireless music festival the night before and had a few too many drinks watching Snoop Dogg and Ke$ha take to the stage.

“Well let’s just hope nothing happens that will make your head spin,” she replied.

As we continued walking through the mall, I noticed a huge crowd gathering outside the shops, all looking up at the top of the building.

I glanced over at Hayley with a quizzical look and she looked back at me blankly. 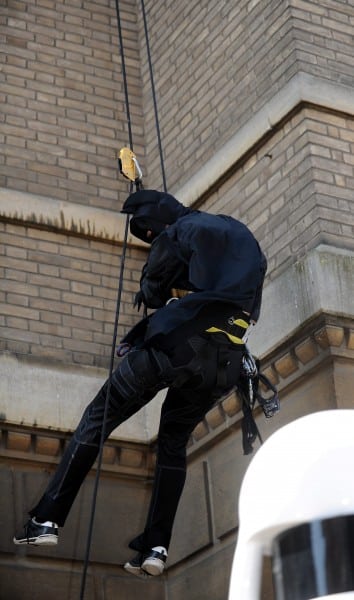 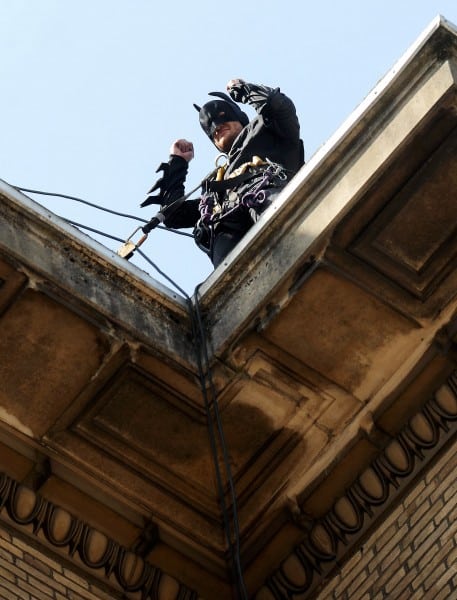 “Oooh Batman,” I said to Hayley, getting excited and quickly forgetting all about my hangover. “I wonder what’s happening.”

I’d loved Batman for as long as I can remember and anything related to the caped crusader grabbed my attention.

My boyfriend Ross, 29, even had a Batman suit that he wears for a laugh.

We’d been together for about five years and I was certain I wanted to spend the rest of my life with him.

We were perfect for each other. If he was Batman, then I was definitely his Catwoman.

Then I saw him – Batman.

“Hayley, look up there,” I said, pointing to a man dressed as the character hanging off the edge of a building.

I thought about Ross who would have loved to see something like this.

As the music quickened the pace, the Dark Knight began rappelling down the side of the building.

The crowd cheered as his cape flapped in the breeze and he landed on his feet successfully.

Then, he turned as two men dressed as thieves ran passed him through the crowd. 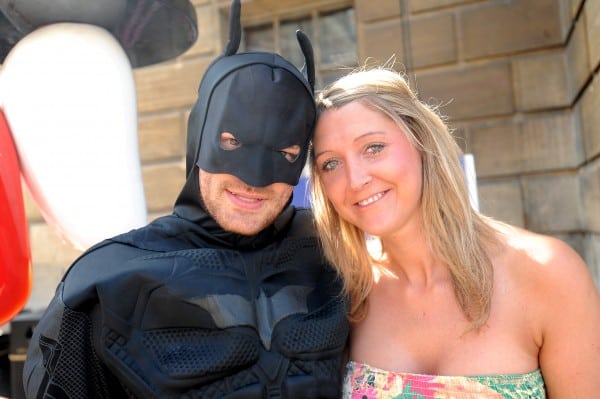 But as he chased them, I noticed something about the way he was running, and my heart started to race.

Surely that can’t be Ross, I thought to myself. His shoes and the way he was running looked so familiar and I’d know that bum anywhere!

I looked at Hayley who was grinning like the Joker and then my eyes went straight back at the action.

‘Batman’, or as I was starting to suspect, Ross, had apprehended the black-and-white striped ‘crooks’ and had retrieved a small box from one of them.

My heart rate continued to rise as the crowd cheered and he leapt to his feet and came running over to me, the music still playing in the background.

I couldn’t contain myself any longer and I began laughing out loud. I knew for sure it was Ross now, and Hayley was laughing her socks off too.

The Caped Crusader got on one knee in front of me and held the box open.

In it was the most beautiful engagement ring I could have ever imagined.

My cheeks flushed bright crimson, but I couldn’t help beaming from ear to ear.

“Of course I will,” I said and he got back up to his feet, kissed me and held me in his arms.

The crowd cheered and Hayley congratulated us. She had kept it from me so well. I had no idea what was happening. I couldn’t believe it.

Ross says he’s done his bit now, and that the wedding is all up to me – typical superheroes!

Send us your proposal story by completing the form on the right hand side of this page.  Nothing will be printed without your consent, but we’ll get back to you within 24 hours (except on Sundays) to let you know how much the magazines and newspapers would be willing to offer for your story.

If you want to read more about the story selling process, read our sell my story page where you’ll find more information.  You can also read more on our Frequently Asked Questions page.