We will pay you to share your serious stories, as well as lighthearted ones like this inquisitive toddler who had to be cut free by firefighters – after getting a TOILET SEAT stuck around her neck. 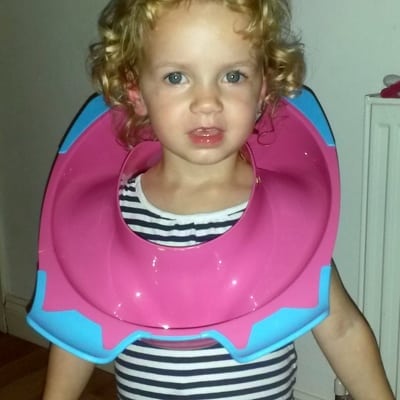 Little Teagan, aged two, couldn’t wait to get started when her parents brought home a new Minnie Mouse training seat.  But while playing with the new purchase she pulled it down over her head and was unable to get it back off – leaving it dangling like a giant necklace.  Her parents, David and Emily, battled in vain to free it using butter, olive oil and washing up liquid. They even marched the embarrassed toddler down the street, knocking on doors to ask neighbours if they had any cutting equipment.

After calling 111 the pair were advised to dial 999 and ask for the fire brigade, which rushed to their home in Frome, Somerset, and freed the youngster with cutting gear.

Sales rep Emily, 24, said: “I bought it that day and she was just messing around, putting it on her head. I didn’t think anything of it. “My husband then went upstairs to give her a bath and put her in her pyjamas, he was just putting something away and when he turned around the seat was around her neck.  “At first we thought it was quite funny, but then when we started trying to get it off we just couldn’t get it over her ears. 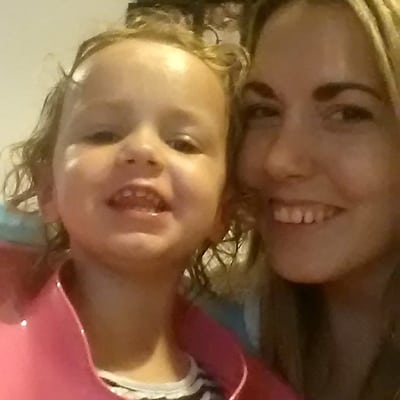 “We tried to put butter around it to help it slide over but it wouldn’t work, we also tried olive oil and Fairy liquid. “We tried to cut it off but we just didn’t have anything sharp enough. We went next door but they didn’t have anything suitable either.”  After spending almost an hour trying to get the £8.99 pink training seat off themselves, they decided to call for help.  One unit attended their home with two firemen using a pair of ‘tough cut’ scissors to free the youngster.  Emily and David, a car parts provider for Mercedes, can now see the funny side of the incident, which happened on Tuesday (30/09) evening. “I can’t believe so many people know about it – all the neighbours and locals seem to be talking about it,” said Emily.  We are definitely seeing the funny side of it – you have to really.

At one point the firemen were worried they would have to use electrical cutting equipment but in the end they were able to use some tough cut scissors. Little Teagan was very good throughout, she only really got upset when we were trying to get it over her ears. She won’t be doing it again!”  A Devon and Somerset Fire and Rescue Service spokesman said: “The girl was not in distress and very happy to be released.”

If you would like to share a story with a national magazine, fill out our story valuation form today to find out what your story is worth.  There is no obligation and nothing will be printed without your permission.

You can find out more about how to sell a story here: sell my story.