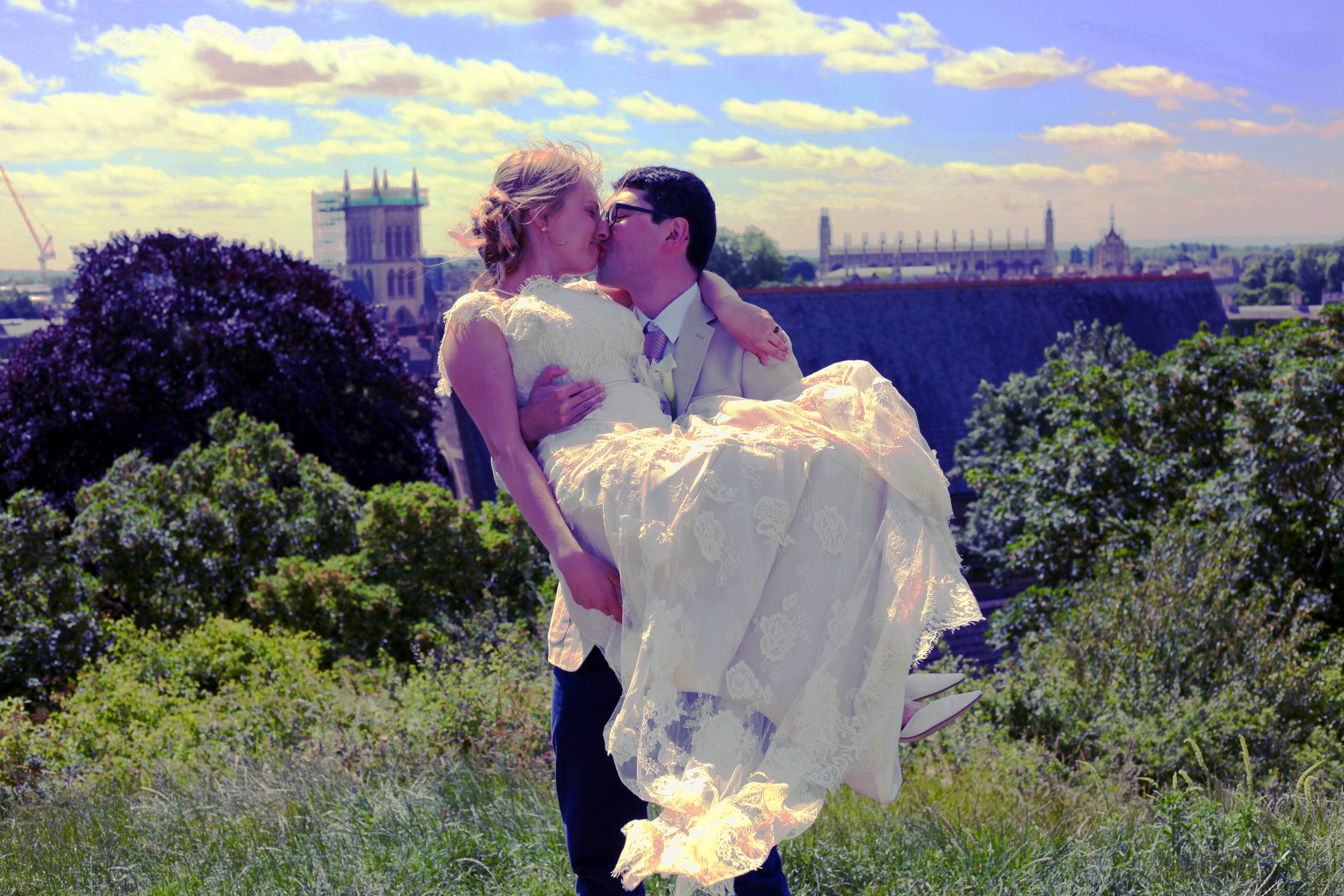 Couple have the ultimate Eco Wedding

Romilde and Seigo had the ultimate Eco Wedding, and we helped them share their story with the world.

If you have a quirky, unusual, heartbreaking, or even bizarre wedding story, we want to hear from you.  We’re here to help you tell your story to magazines and newspapers, and get the highest fee guaranteed.  Our service is won’t cost you a penny and there is no obligation. Sell Your Wedding Story.

Simply fill out the form on this page to tell us a little about your story.  One of our team will get straight back to you if we can help get your story out there.  Nothing will ever be printed without your permission. You stay in control.

Most brides want to be treated like a princess on their big day and aren’t afraid to splash the cash to make the wedding of their dreams become a reality, but Romilde Kotzé, 32, and her fiance, Seigo Robinson, 32, had other ideas.

The eco-fanatical couple were determined to spend as little as possible and have a frugal wedding and so they hired a waste food charity as caterers to serve up a buffet of rejected foods, including gingerbread men and fruits.

Romilde, from South Africa, said: ‘We planned to have a circular wedding, which hinges around reusing, repurposing, sourcing sustainably, and minimising waste.

‘For us, recycling is a last resort, reusing is everything.

‘It was super important for us to make the absolute most of the resources we had, close by and readily available.’

The pair met when Romilde had just arrived in Cambridge, in April 2013. Lacking friends she signed up to social app ‘Meet Up’ and attended a bicycle tour of the city and pub crawl.

Romilde said: ‘It was very sweet really because about half way through my bike got a flat tyre and Seigo was a total gent and gave me a backy the rest of the way!

‘I thought it was the least that I could do to accept his invitation of a date.’

Just three years later, the pair, from Grantchester, Cambridgeshire, had moved in together and had begun to talk about marriage.

Down on one knee

Romilde said: ‘There was no magical proposal, we just chatted about it and decided that it was right for us.

‘Seigo was keen to do the classic ‘down on one knee’ so he officially popped the question as we hiked up Table Mountain in South Africa.

‘It was a lovely moment, even though we’d already told everyone we were engaged!’

The wedding plans were based around the principals of re-using, and adapting what was already available.

Seigo, a sustainability consultant, and Romilde, hired a surplus food charity as caterers to serve up a buffet of huge helpings of salads, banana skin curries and mushroom goulash instead.

Romilde, a biomedical engineering researcher at the University of Cambridge, said: ‘FoodCycle uses foods that are passed their sell-by dates but not their use-by dates. It’s perfectly harmless and massively reduces waste.

‘It is a great charity that both Seigo and I have volunteered at, there is actually a waiting list to volunteer there in Cambridge, it’s that popular.

‘Of course there are somethings, fish and meat that this wouldn’t be safe with, so our wedding buffet was entirely veggie, which suits us.’

Eco wedding was third of the cost of a normal wedding

The frugal pair were hesitant to say how much their nuptials cost. However they admitted the total amount was roughly a third of a normal wedding, which on average are thought to be around around £27,000.

But is wasn’t just the catering that that was planned with eco-consciousness. Family and friends all chipped in, lending and reusing things from clothes to decorations, for the big day.

Romilde said: ‘We had second hand wedding clothes, wedding rings, and Siego gave a great speech promoting the benefits of a sustainable wedding.

‘My mother and my aunt made some gorgeous bunting to help decorate the venue. I mean they did fly from South Africa which isn’t hugely environmentally friendly so it was nice that they made up for that!

‘One of the most important aspects was my wedding dress, which I borrowed from my sister Ezanne East, 34.

‘It was the dress she got married in in 2010 and it’s beautiful- classy and timeless. I couldn’t have been happier in it, and it was re-used so it was free and totally eco-friendly!’

The bridesmaid dresses were second-hand and the wedding rings were “cheap bronze Roman rings” from an antiques store.

Romilde said: ‘Seigo bought a suit second hand, but he made sure to buy one that he would be able to use again and again in daily life. Not something just for the wedding day.

‘I also asked my bridesmaids to wear dresses that they already had.

‘I was 100% happy with all the arrangements for the day, nothing was sacrificed, we were just careful.’

The couple were also aware of making their chosen venue as environmentally friendly as possible. Choosing to have their reception, with around 80 guests, outside.

She said: ‘We hired the Granchester Orchard Tea Garden. So it was an outdoorsy occasion, meaning we saved on electricity as it was mostly daylight. As night fell we chose to have simple dimmed lights so as not to waste energy.

‘It was quite beautiful and atmospheric too!’

‘I had a bunch of flowers that weren’t reused but it’s my favourite South African flower. I made sure to have just a small cluster of them, locally sourced of course!’

Eschewing the traditional style of wedding presents and favours, Romilde said: ‘We asked for any money that might be spent on gifts for us to be donated to charity.

‘As wedding favours we gave each guest a jar of jam or chutney that FoodCycle make with fresh veg and fruits that won’t keep long.

‘We also gave out faulty Gingerbread men, they were all missing their eyes but were still perfectly delicious!’

Away from wedding preparations, the pair continue to be cautious of their ecological footprints.

‘People think it must be a dull life for us having these morals. It’s actually bought us even closer together.

‘We go out for an afternoon, trying to source things for the house and it’s fun when we find the perfect thing. Additionally it’s a joint activity which we really enjoy together.

‘It’s an incredible sense of achievement that comes from these finds.

‘Of course we save money, but it isn’t just that.’

Romilde and new husband Seigo continue their eco-friendly life style and plan to even up their game!

Romilde said: ‘Seigo and I are now really into acroponics. We’d ideally like to have a system set up in our house where we have fish, and the waste from the fish tank actually feeds plants or veg that we’re growing.’

Romilde and Seigo hope that when and if they start a family they will be able to instil their way of life into their children.

She said: ‘We would hope to continue to find a way of living that would be engrained in our kids. But that would also be rewarding for them.’

If you have a wedding story that would make a fun, interesting or heart-wrenching story, we want to hear about it.

We guarantee to get you the highest fees for your story. Your story will be told YOUR way. You stay in total control, so you can rest assured you won’t be misrepresented in print.

Simply fill our our Story Valuation form to tell us a little about your story. One of our team will get straight back to you.

For more information about the story selling process, see our Sell My Story page.