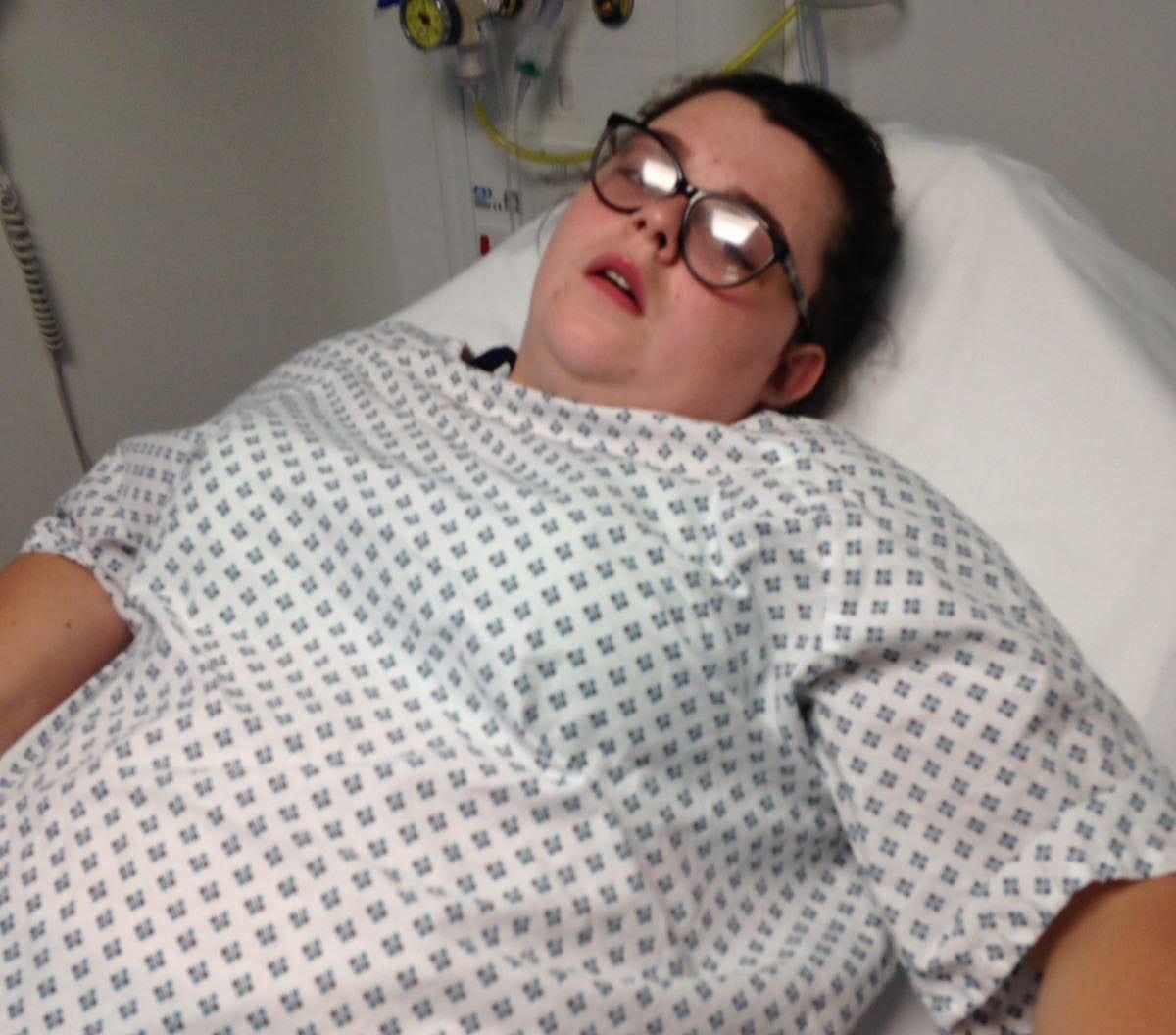 Did you experience unexplained weight gain? Did it turn out to be something sinister? Share your story with a magazine, and we’ll pay you for it!

When Leah mysteriously experienced unexplained weight gain, despite dieting she was horrified to discover a life-threatening 26lb cyst the size of a WATERMELON inside her.

If like Leah you’ve had a medical nightmare, or any other story you’d like to share, get in touch today.  We’ll help you tell your story, and get paid the maximum fee possible.  SellUsYourStory.com is part of the largest press agency in the country – we supply stories to major newspapers and magazines, so we guarantee the highest payments.

Help others in a similar situation. Raise awareness for a cause or a charity.

Simply tell us the main points of your story using our Story Valuation form.  One of our friendly team will get back to you.  We won’t use anything you send us without your permission and there is no obligation. Our service won’t cost you a penny.

My unexplained weight gain was a cyst

Before I started university I wasn’t exactly what you’d call slim, but by the end of my first year the combination of homesickness and uni stress had seen me lose an incredible four stone.

That isn’t to say I was tiny, I still weighed a healthy 14 stone, but compared to the 18 stone I was pushing pre-uni, the difference was obvious.

It wasn’t exactly a healthy diet, anxiety and stress, but even I couldn’t help feeling happy with getting down to a size 14.
But when I returned for my second year of studies, the weight soon started to pile back on.

My relationship with Richard was going from strength to strength, and the more time we spent together the more we ate.

‘Honestly, it’s not fair.’ I complained over dinner with Richard. ‘You can eat five big macs and it doesn’t touch the sides. Me, I just look at one and gain 12 lbs.’

Pounds started to creep on

Used to being a bigger girl, when the pounds started to slowly creep up on me I just embraced my curvier figure.

Like most of my friends I turned to food when the stress built up, and as the coursework mounted I was snacking more than ever.

But by the time I’d started to realise just how heavy I’d let myself get I knew something had to change.

‘How could you let this happen?’ I asked myself in the mirror, pinching and pulling at the tyre of blubber around my midriff.

Still, there was hope. Richard is a bit of a gym bunny, and I made the brave decision to start joining him.

After months and months of being more careful with food and the gym, I was shocked to find my weight had barely changed at all.

If anything, with every weighing I’d notice an extra pound or two!

Worried that there might be a deeper problem than my love of food, I booked a doctor’s appointment to see what was going on.
‘I think what we really need to be looking at here is your diet, Leah.’ The doctor told me after taking note of my stats and lifestyle.

‘I… Well… I have been trying!’ I quickly responded, feeling my face flush.

Maybe I’d been kidding myself, I hadn’t exactly had a diet overhaul… I had been cutting back though!

Determined to get back down to a weight I was more comfortable with, I completely cut down on my portion sizes.

It surprised me how easy it was lower my calorie intake with just a few small changes.

Two roast potatoes instead of six, swapping sugar for sweetener and saying no to pop all together. Before long it was June and I was ready to jet off to Greece with Richard. But to my dismay my new regime hadn’t been paying off.

‘I can’t believe it!’ I cried from behind the changing room curtains. ‘It doesn’t even fit properly.’

I’d gone to buy some last minute essentials and could barely fit into a size 20 dress – what was going on?

‘Don’t let it ruin your holiday, honey.’ My mum tried to reassure me. ‘You’ve got a fella who loves you, and you deserve a chillax after all your hard work.’

I knew she was right but I struggled to shake off the disappointment.

The week before my holiday I managed to see my doctor again, but he still refused to believe it was anything serious.
‘Have you thought about joining at weight loss group, Slimming World perhaps?’ He suggested.

I couldn’t believe I was being told to join Slimming World by my doctor, and put the thought to the back of my head. Despite being the heaviest I’d ever been, I still managed to make the most of my holiday, and felt well and truly rested. I decided to give myself a few weeks before the daunting task of signing up with my local Slimming World group, but in the end I never got round to it.

‘Aargh, my stomach. Something not right!’ I called out in the middle of the night.

‘What? What is it?’ Richard asked, shooting out of bed.

I was rushed to Sheffield General Hospital and after a four-and-a-half hour weight, and numerous blood and urine tests, I was told I was on the backendof a urinary tract infection.

‘A UTI?’ I asked, the painkillers finally kicking in. ‘It can’t be.’

By 10.30am all the tests had come back clear and I was being sent on my way.
But come the afternoon I was in utter agony again, and not knowing what to do, Richard called my mum in a panic.

‘Listen, take her to Chesterfield Royal Hospital.’ She told him down the phone. ‘They’ll know what to do.’

Chesterfield Hospital is my mum’s local hospital, and despite being further away she was adamant I’d be in safe hands there.

We arrived at just gone 6pm, and by 8pm I’d had three sets of blood, two urine tests, my own bed and an ultrasound on the way.

‘We’re ready for your ultrasound now, Leah.’ The medic told me, reassuringly.

They wheeled my through and as the sonographer began tracing my belly with the ultrasound I could tell by her face something wasn’t right.

Something was seriously wrong

‘What’s wrong?’ I asked her nervously.

‘Well, it’s just… I can’t see your bladder, something’s blocking the view.’ She began to tell me. ‘We’re going to need to do an internal ultrasound, I’m afraid.’

The medic slipped a tiny probe up inside of me and identified a cyst that was blocking my entire bladder.

‘There’s a cyst the size of watermelon growing on your ovary, Leah.’ The doctor finally confirmed. I was horrified, and immediately began treatment to drain the cyst. It wasn’t pleasant to say the least.

The nurse attached me to a giant suction device that slowly drained the liquid from the growth. Over 16 hours – and 13 litres of fluid – later, I was finally unhooked from the machine. Despite the trauma of it all, I’d lost two stone and dropped from a size 20 to a size 16 in less than a day. But I didn’t come out unscathed.

‘You have two options here, Leah.’ The doctor told me.’ We can leave the remains of the cyst, or perform an operation to get rid of it completely.’

Because of the cysts proximity to my ovary, it meant I could significantly lower my chances of conceiving. ‘I’m not doing it.’ I told Mum and Richard anxiously. ‘It’s not worth not having kids for.’

‘Now Leah, just think about this for a second….’ Mum began telling me. But it was Richard who convinced me.

‘Leah, there’s more than one way to start a family.’ He said, taking my hand. ‘And what’s the point of having a family if your health is compromised?’ I knew he was right and agreed to the surgery.

Unfortunately, the doctor’s concerns were right, and I ended up losing an ovary. I now have 50% of the chance of falling pregnant but Richard and I remain hopeful.

Do you have a weight loss story to tell?  Did you experience unexplained weight gain or weight loss that turned our to be a medical issue?

Share your diet story with others to help people in a similar situation, and make money for yourself or a charity of your choice.

Let us help you secure the most money for your story.  Simply fill out the form on this page and we’ll get back to you with a story valuation.

Everything you send us is completely confidential until you tell us otherwise.

To read more about how to sell your story, see our sell my story page: https://www.sellusyourstory.com/sell-my-story/