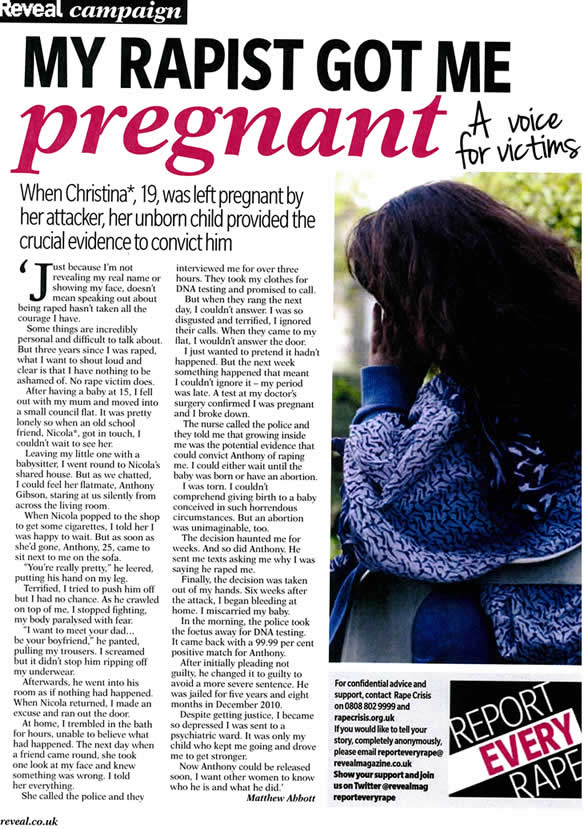 Christina*, 19, was left pregnant by her vile rapist and her unborn child was the only thing that could convict him.

Rapist got me pregnant. His unborn child convicted him.

‘Just because I’m not telling people my real name or showing my face it doesn’t mean what I’m doing hasn’t taken all the courage I have. My personal life is my personal life but what happened to me three years ago is something no woman should be forced to stay quiet about. This is why I’m supporting Reveal’s Report Every Rape campaign.

At the age of 15, when I should have been in school, I gave birth to my daughter, Bella. It wasn’t planned, but when I found out I was due, I was determined to keep her. I told my dad who, after he got over the initial shock, was delighted that he was going to be a grandfather.

But my mum didn’t take it the same way. After Bella was born we had a huge row and just after I turned 16, I left home and moved into a small council flat – just the two of us. My older brother came to see me every week and helped me out whenever he could but I was still quite lonely. So when an old friend from school sent me a message on Facebook, we agreed to meet for a catch up.

I was looking forward to being a teenager again so I arranged childcare for Bella and went to see her. She was a runaway too and was living in temporary accommodation at the time with two other people. After I arrived, she told me she needed to go out to buy cigarettes and asked if I would be ok staying behind so she wouldn’t have to hand in her keys. I was nervous about being left alone in the flat, especially since her roommate, Anthony Gibson, 25, was acting strangely. He kept staring at us across the room but not saying anything. As she never introduced us it felt very awkward. But she assured me she would only be five minutes so I agreed.

As soon as she left, Gibson sat down next to me on the sofa. He moved so close I could smell the stench of his breath. “You’re really pretty, you are,” he said creepily, putting his hand on my leg. “Get away from me,” I screamed, trying to push him away. But at only 5ft, trying to wrestle with a man over 6ft, I knew it was futile.

I began to panic as he leapt on top of me. I was so scared I couldn’t move – I couldn’t even wriggle under his weight – he was that strong. “I want to meet your dad,” he said. “I want you to be my girlfriend.” I didn’t know what to do. The next thing I knew he was pulling at my trousers, ripping my underwear off and forcing himself down on me – raping me.

I screamed as loud as I could but he just looked blankly at me. Afterwards, he just got up made himself a drink and went into his room, as if nothing had happened. When my friend returned I told her Bella was sick and that I had to leave. As soon as I picked up Bella, I raced home and jumped in the bath and stayed in there for hours.

The next day, another of my friends came to visit me and as soon as she saw my face, she knew something was wrong. Before I knew what had happened, I had told her everything. She called the police and they interviewed me for over three hours. They took my trousers and knickers away for DNA testing and said they would call me. But the next day when they rang, I couldn’t answer the phone. I was so disgusted with myself and terrified of talking about what happened, I just ignored all their calls. Even when they came round to my flat I wouldn’t answer the door. I just locked myself away.

A week later my period was late. I went to the doctors and when a pregnancy test came back positive, I broke down. I had never cried so much in all my life – I thought the tears would never stop. The nurse called the police straight away and they came out the very same day. They told me that growing inside me was the potential evidence that could convict Gibson of raping me. I could either wait until it was born, or I could have an abortion.

At the time I didn’t know what to do. I didn’t feel emotionally strong enough to bring up another baby on my own. Nor could I comprehend giving birth to a baby whose father was a rapist. The truth was I wasn’t strong enough to have an abortion either. The pain of the decision haunted me for weeks. And so did Gibson. He sent me texts saying things like ‘you better have a good lawyer or stop talking sh*t’, and over ten messages asking why I was saying he raped me.

Ultimately, the decision to keep the baby was taken out of my hands. Six weeks after the attack I began bleeding at home. I phoned the doctor and they told me to get to hospital as there was clotting. They kept me in overnight after telling me I was having an early miscarriage. In the morning, the police took the blood clots away for DNA testing. It came back with a 99.99% positive match for Gibson.

After previously pleading not guilty, he changed it to guilty to avoid a more severe sentence. He was jailed for five years and eight months in December 2010, reduced on remand and served just two and half. He will be released in July 2013.

After the court hearing I became so depressed that I tried to take my own life. But the thoughts of leaving my daughter alone made me fight against it. And the thought of him beating me made me fight even more. I was sent to a psychiatric ward for three weeks and when I was released I met my boyfriend.

We’re expecting our first child together – a brother for Bella, and I finally have the family I’ve always wanted. But with Gibson’s release just around the corner, I want other women to know who he is and what he’s capable of. That’s why I’m not afraid anymore. That’s why I’m speaking out.’

If you have a story to share that could help others in a similar situation, or expose a criminal, please get in touch.  You can reach us by using the contact form on the right hand side of this page.  You can read more about how to sell a story anonymously on this page.