Karen, 54, had been married to Kevin, 54, for 16 years, they owned a business together and she thought she knew everything about him. Then one day when she logged on to her husband’s computer Karen unearthed a sordid secret that left her physically sick. Karen’s Husband is a Paedophile.

Stored on Kevin’s computer was over a million child abuse images. When Karen warned him she would be telling the police sick Kevin offered her a divorce and to sign over their home if she kept quiet. At his trial jurors took just 90 minutes to find him guilty and he was jailed for five years. 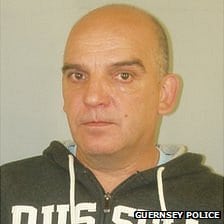 After being married for 16 years I liked to think my husband Kevin and I knew each other inside and out. When we first met back when I was in my mid-twenties I was working as a chef for a catering company. One morning I  left my house to find that the usual driver had been replaced by new-starter Kevin. Once we’d got over the awkward formalities of introducing ourselves I found that Kevin was very easy to talk to and I warmed to him almost instantly.

Soon the drives to and from work became the highlight of my day. I loved it when it was just Kevin and I in the car. We used to have a giggle and poke fun at each other with me referring to him as my personal chauffeur. With just the two of us spending so much time alone together things moved quickly and it wasn’t long before we became more than just friends.

Within a year we both gave up our jobs and decided to fly to France together to go travelling. By the time we got back in the country I had made up my mind that Kevin was the one for me and we both agreed the next step was to move in together. I felt so lucky. It seemed like things were really falling into place.

After we were married Kevin decided to quit his job and set up his own business installing windows. “Why don’t you help me out Karen?” He asked me out of the blue one day. “I think we would make a great team.” I didn’t take much convincing.  We agreed that I would do the administration work from home while Kevin did all the fittings in Guernsey where we lived.

Over time we built the business up between us to be a great success. Of course, like most long-married couples Kevin and I had our ups and downs and working together often put on a strain on our relationship. I often found myself pestering him to get things done when it came to our heavy workload. There was one occasion when I really got fed up. For over a fortnight I’d been reminding Kevin to look on his work computer for a file that I needed to review.

“I’ll do it later,” he’d shrug, before forgetting about it again. Finally tired of hearing myself nag him, I decided to look on his computer for it myself whilst he was out at work. ‘If you want a job doing do it yourself,’ I thought to myself as I switched on his monitor. Typing the surname of the file I needed into the computer search box I was surprised to find lots of unfamiliar documents that were labelled by girls names.

I don’t know what exactly I was expecting to see but what I saw seconds later shocked me to the core. It was an image of a young girl – a child – posed in a provocative manner. My blood ran cold. I scrolled past two more pictures before I could take it no more.

My stomach churned and the room span as I went dizzy. Unable to stop myself I vomited uncontrollably. What I had seen on Kevin’s computer had made me literally sick to my stomach. I was completely disgusted. This man was my husband. I just couldn’t ignore it, Kevin was a paedophile.

Once I’d recovered from the shock my mind began racing as to what what would happen next. Kevin would be sent to prison for a long time and I’d be left facing all of our friends and neighbours. Due to the nature of Kevin’s worked he visited a lot of houses in our local area – families with young children. I could only imagine their horror when they found out what he was. But there was no way I wasn’t going to tell the police. I just couldn’t live with myself knowing this vile secret.

Though I could barely bring myself to even look at him I knew I had to face Kevin. I decided to confront him about what I had discovered before I told the police. Trying to remain calm, although I was shaking all over, I looked him in the eye and said, “I know what’s on your computer.” 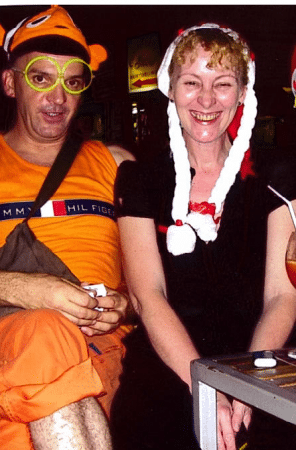 The words hung in the air. Kevin froze in his tracks and looked at me blankly. “I have seen those files Kevin,” I repeated. “You know which ones I mean.” He opened and closed his mouth realising there was no point even trying to deny it to me. After a long pause he said, “I’ll give you a divorce Karen. You can have the house if you want it. You can have everything, just don’t go to the police.” he pleaded.

He was a desperate man. I could see it in his eyes. But there was nothing he could promise me that would stop me calling the police. When they arrived, after what felt like minutes from when I put the phone down, they took Kevin away in a police car. I stayed at the house to be interviewed.

Afterwards a forensic team worked to remove all the computers and laptops from our house. Even memory cards from cameras were taken. My home was turned into a crime scene as police hunted for evidence. In the weeks after I felt too ashamed and scared to leave the house. It was like I had done something wrong.

Luckily I had a good support network of friends around me who helped to cheer me up when I felt like everything was falling apart. Desperate to cut all ties to Kevin I initiated a divorce before his court case began. The thought of being in anyway associated with him repulsed and disgusted me. The whole thing just made me feel dirty.

When Kevin did go on trial at the end of last year I attended court on the first day as a witness to give evidence against him. After that I couldn’t face it anymore. It was too much to listen to. The internet history on Kevin’s computer showed he had accessed paedophile websites and searched for pre-teen images using explicit terms. He had also visited forums about child abuse for discussion with other paedophiles.

It took jurors just 90 minutes to reach a unanimous verdict. Kevin was found guilty of having more than 1.1 million indecent images and videos of young girls. In January this year I went back to court to see him be sentenced to five years in prison. Leaving the court room knowing Kevin was now safely locked away gave me a slight feeling of closure, but at the same time I couldn’t help thinking that five years just didn’t seem long enough for what he’d done.

The truth was painful to admit but I’ve never felt for a moment any regret about telling the police about what he did. Now it’s all over I’ve decided to sell the house we lived in together. It just brings up too many painful memories for me to stay here.

I’m still haunted by what I saw that day on Kevin’s computer but for now I’m taking each day as it comes and trying to move on as best I can. Kevin’s sordid secret might have destroyed his life but I’m determined not to let it ruin mine. 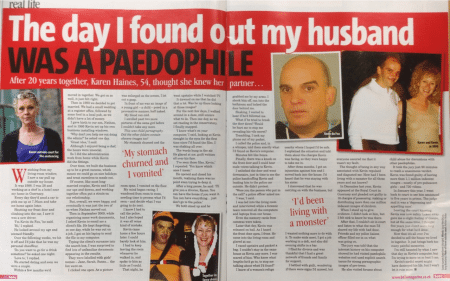 Karen wanted to tell her story and help those facing a similar situation.  She shared her story with Bella Magazine, who offered the most after taking part in our daily story auction.

If you would like to see how much your story is worth simply fill out the Story Form on the right hand side and we’ll let you know an estimate of what we think your story will fetch on the story auction.  Because your story is auctioned to the highest bidder, you are guaranteed the maximum fee.  We’ll also ensure that your story is told your way.

To read more about how to sell a story to the press, read our sell my story page.