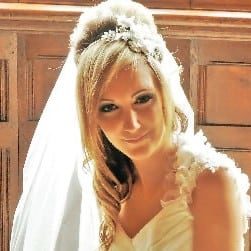 WHEN KAYLEIGH DUFF WAS GIVEN THE TERRIBLE NEWS THAT HER LIVER CANCER WAS TERMINAL, SHE PLACED A VERY SPECIAL DREAM AT THE TOP OF HER WISH LIST – TO GET MARRIED BEFORE SHE DIED.

BUT WITHOUT A GROOM ON HER ARM IT JUST WISHFUL THINKING.

HER BEST FRIEND, KATIE, HOWEVER STEPPED IN AND ARRANGED FOR THE FAKE WEDDING OF A LIFETIME… COMPLETE WITH HANDSOME MALE MODEL AS A STAND-IN ‘GROOM’. 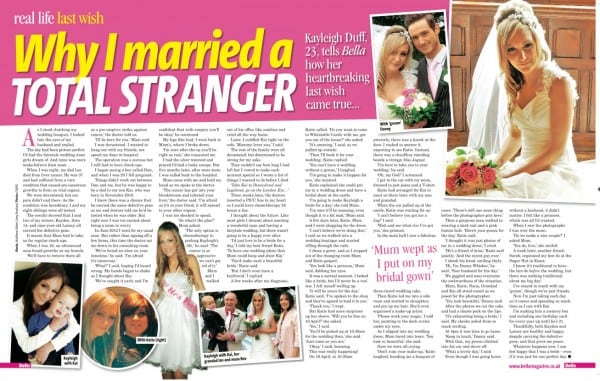 As I stood there in my beautiful flowing wedding gown, next to my family and my two-year-old son, Kai, I looked my husband-to-be in the eyes and smiled.

It couldn’t have been more perfect: the dress, the cake, the venue – a huge opulent castle – and such a dreamy groom. He could easily have been a model.

But as the photographer’s flash went off, I was transported back to reality.

Most girls dream of a fairy-tale wedding, but mine was more make-believe than most. Even down to the groom.

When I was 13 years old, my sisters and I were taken to the hospital for blood tests.

My family and the doctors were concerned that we would have the same hereditary gene that killed my father when I was just eight years old.

He died from Familial adenomatous polyposis which causes polyps to grow on the large intestine – raising the risk of developing cancer.

Unfortunately it turned out that we did, and for the next three years we went through countless tests to keep an eye on our health.

When I was 16, they found polyps on my bowels and I had to have an operation to have my large bowel removed. I was devastated.

At 16 I should have been going out with my friends and having fun. Instead, I was in and out of hospital which caused me to miss my end of year party, and even some of my GCSE exams.

I soon recovered however and was trying to have normal life within just a few months of the surgery and after leaving school I began work as a kitchen assistant before having my son Kai when I was 21.

But just a year later, at one of my six-monthly scans, they found an ulcer on my intestine.

Beginning to panic, my thoughts immediately went out to Kai who was barely a year old.

“It’s OK,” said the doctor, sensing my dread. “It’s nothing serious. We can cut it out and it will be fine.”

I felt better, but nothing in the world can prepare you for the C word.

After the surgery they found some more spots on my liver. This time it wasn’t good news.

The cancer had made its way into my blood stream and was infecting my other organs.

They told me that the cancer was so aggressive they wouldn’t be able to get rid of it.

My only hope was for life-prolonging chemotherapy.

When I first started receiving chemo, I wrote a bucket list of things I wanted me and Kai to do together: Disneyland and Legoland, and go to London and go on the London Eye.

And like most girls my age, I dreamed of a fairy-tale wedding in a castle with a big flowing gown, a tiered wedding cake, and a handsome husband on my arm.

But with no fiancé, and not even a boyfriend in sight, I knew it was wishful thinking.

That is until my best friend Katie phoned me.

“I want to do this for you,” she said. “I can do your hair and make-up. We can hire a venue and get you a dress and a photographer. You’ll be such a beautiful bride. “

Overcome with gratitude I agreed to let Katie handle it all. She seemed determined to make this one dream of mine come true that I wasn’t going to say no.

There’d be no groom, but I would have my big day nevertheless.

As the preparations got started, I continued with the chemotherapy.

I carry my chemo in my handbag and am constantly connected to it through a drip in my arm.

It’s great because I can just get on with my life and go out with my friends. I’m not bound to a hospital bed.

But once a month, I go to the clinic for a more severe course of chemo that lasts for ten hours.

It completely knocks me out and I’m incapacitated for most of the week.

I go off my food, can’t talk and have trouble sleeping. But I know it’s keeping me alive so I don’t complain.

When I told Kai about the wedding, he was so excited. We got him a little Paige Boy’s suit with a pink waistcoat and tie. He couldn’t wait.

“That’s right. Mummy’s getting married,” I would tell him.

Katie told me she had organised for us to have the ‘wedding’ in the Whitstable Castle in Kent – a luxurious building that I could only have dreamed of.

I went for a dress fitting and picked out the most gorgeous dress I could and chose a tiara and veil to look as much like a princess as possible.

When the big day came around, I had butterflies in my stomach.

I knew I wasn’t really getting married – there wasn’t even going to be a groom so I wouldn’t be giving myself away – but I was still nervous of being in a wedding dress in front of my friends and family and having my picture taken.

When I heard the horn outside, I expected to see Katie in her car waiting to pick me up.

But when I opened the door, a vintage Jaguar was waiting to take me to the castle.

Katie was nowhere to be seen though.

I got in the car with my mum and we made our way to the castle.

When we got there Katie was waiting inside with the most beautiful tiered wedding cake I have ever seen.

She had set up the whole of the main hall with a buffet of sandwiches and food she had prepared herself.

“I can’t believe you got me a Jag!” I squealed.

“And all this too?! You’ve done too much, Katie. Thank you so much!”

We hugged and then she turned to me and said, “You just wait and see.”

I went into room at the side of the main hall where I could get ready.

I sat down and Katie did my hair and make-up while my mum oohed and ahhed and tried to stop herself from crying.

But then I started crying too and pretty soon we were all blubbing.

Then, after I’d being helped into my dress, my Nan came in and as soon as she saw me burst into tears, which had us all going again.

Just as we were about to go into the main hall for the ‘wedding’, Katie turned to me and said, I’ve got one more surprise waiting for you. I hope you like it.”

Then in walked a man dressed as a groom.

“Here’s your groom for the day,” she said with a big grin on her face.

My jaw dropped. He was so handsome, and with buttonhole that matched my bouquet a rugged face and great hair, he looked just like a model.

“He’s a model,” whispered Katie, leaning in, reading my thoughts.

Stopping myself from swooning, I held out my hand and he took it and introduced himself.

“I guess I’m your bride then…” I replied.

We giggled and the awkwardness of the situation was soon overcome as we tried to make each other laugh for the photos.

It was wonderful and Danny was such a gentleman. He got on really well with Kai too who had a lovely time running about and being his cheeky little self.

I hadn’t expected any of it really and it was quite bizarre, but it was a dream come true. The photographs were stunning and I felt so proud and so lucky that I got to enjoy my big day – even if I didn’t know the groom.

Katie did wonders. When she said I was having a photoshoot I thought it would just be me in a dress. She did so well.

My mum, Beverley, my nan and granddad and all my friends thought it was a wonderful day and no one reacted strangely when I linked arms with a stranger on my wedding day.

It’s just a shame he wasn’t there for the post-wedding hen do. We could have done with a stripper!

And who knows; we’re just mates now, but he did say “never say never.”

I hope I can fulfil the rest of my bucket list now and give Kai everything I can before it’s too late.

“I saw the wedding was on her wish list so I decided to arrange the whole thing.

“Everyone has helped and donated because she is such a nice person.

“She looked absolutely beautiful. She was so stunning.”