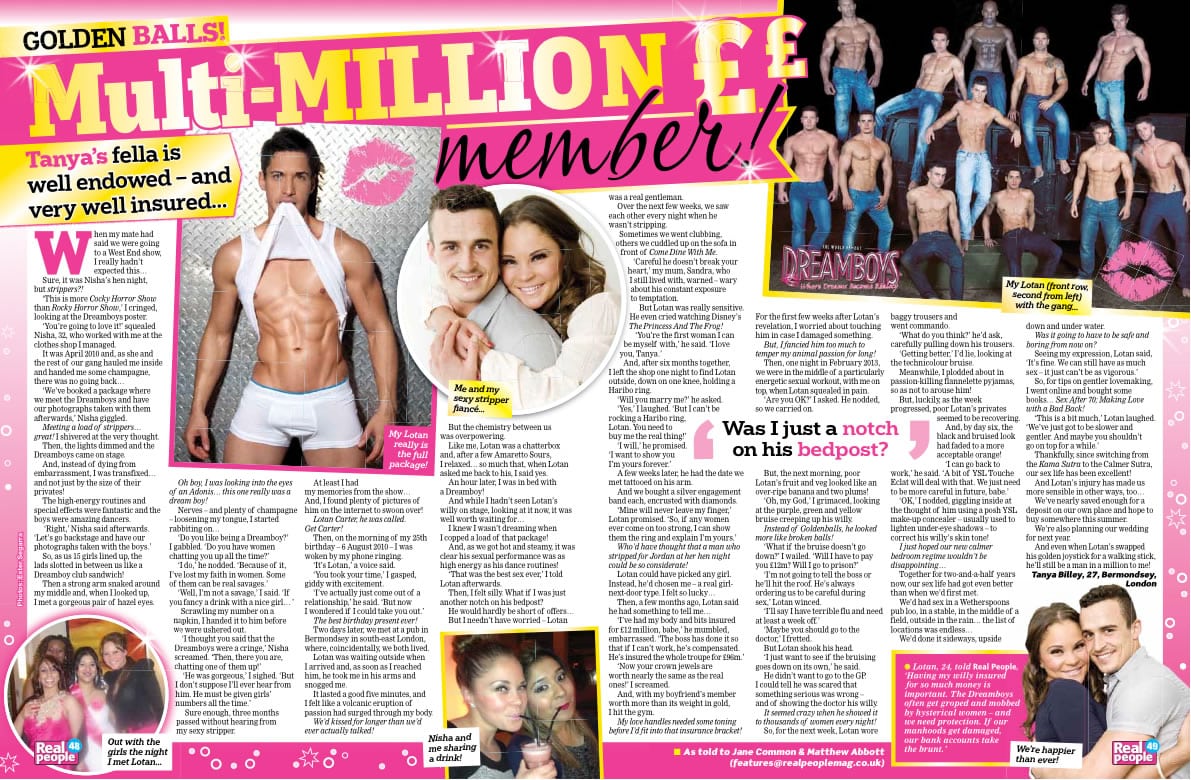 WHEN TANYA, 27, WENT ON A GIRLS NIGHT OUT TO A STRIPPER SHOW, SHE HAD NO IDEA SHE WAS GOING TO FALL IN LOVE ON THE FRONT ROW… WITH ONE OF THE STAR STRIPPERS.

BUT THE BIGGER SHOCK WAS TO COME WHEN SHE REALISED HER NEW MAN’S MANHOOD WAS WORTH MORE THAN HER MASSIVE DESIGNER SHOE COLLECTION, HER WHOLE WARDROBE AND HER HOUSE AND CAR… PUT TOGETHER, THANKS TO HIS MEGA PENIS INSURANCE

my boyfriend insured his willy for £12 million

OK, so this is one of our stories from last year, but we wanted to repost it as it’s the most popular story on our website.  It’s a good reminder that we are always on the hunt for funny, bizarre or eyebrow raising relationship stories.  We guarantee to pay you the highest fees for your story.  Read Tanya Bailey’s story about her stripper boyfriend’s £12m willy!

Sitting on the front row of a strip show at my friend’s Hen Do as a bunch of well-oiled men gyrated their hips in my face, I had no idea that a couple of months later I would be responsible for probably the most expensive willy in history. You’re probably wondering what on earth I’m talking about, so let me explain.

My boyfriend’s penis is worth more than my massive designer shoe collection, my wardrobe, my top-end make-up, my car and my house… put together.

That’s right; his willy is insured for a whopping twelve million pounds, making me the proud ‘holder’ of the goldest member this side of Austin Powers!

My boyfriend, Lotan Carter, 24, is a member of the famous DreamBoys strip act that tours the country jiggling their bits at screaming brides-to-be and shaking their tushies at anyone who fancies a bit. And that’s just where I met him, at one of his weekly skin shows in London.

My friend, Nisha, 32, had invited me along to a ‘show’ and, thinking it was a West End performance or a comedy night, I had agreed to go. When we arrived and I saw the sign over the venue I was gobsmacked. “This isn’t the Rocky Horror Show,” I squealed with laughter. “More like the Cocky Horror Show…”

“Don’t you dare!” my friend said laughing. “You’re going to love it!” And I did. It was such a fun night, really tongue-in-cheek, and the DreamBoys were amazing – dancing, fire-breathing. Some even went the Full Monty. But the one I had my eye on didn’t need to strip to his birthday suit. I could see Lotan clear enough – and I loved it.

Backstage, after the show, he came over, slipped his bulging arm around my waist and said hello. I was absolutely thrilled and when he gave me his number, I cursed the fact I was already in a relationship. My relationship didn’t last long though, and pretty soon Lotan was putting on a private show just for me.

We had hooked up on my birthday when Lotan rang to say ‘Hi.’ We gelled like a tight pair of Y-fronts mold to the steely-hard, well-oiled buttocks of a male stripper, and soon I was giggling at the thought of calling him my boyfriend. Two and a half years later and our sex life is AMAZING, as you can imagine it would be going out with someone like Lotan.

He’s such a passionate lover and because he’s a professional dancer, he’s so limber and stretchy – there’s no position that we can’t enjoy! The only problem is, when you’re going out with a stripper, you’ve got a lot more responsibility than you’d think. Lotan sat me down to explain:

“Listen babe – one of the lads at work had an accident. A fan grabbed his tackle a bit too hard and he’s had to take two weeks off work.”

I was shocked. I know women can get excited – I got a bit excited myself when I went to one of the shows – but I didn’t realise the boys were in any danger.

“We’ve had to take out insurance on our members,” he continued. “Now my willy’s worth £12m!”

My eyes bulged and inadvertently looked at his crotch.

“Twelve million!?” I said as my jaw dropped.

“Erm, up here, babe,” he said pointing to his eyes, and we both burst out laughing. But all the talk about Lotan’s crown jewels got us both very excited and pretty soon we found ourselves in the bedroom. As we were making love, I came down funny on top of Lotan and heard a sickening crunch.

“Oh my God, are you all right, babe?” I said looking down to see tears streaming down his face. In the heat of the moment, Lotan brushed off the pain, switched positions and carried on. It was only later when a black and blue hue spread across his willy that we started to think something serious might have gone wrong and that the insurance policy was no laughing matter.

Showing me his manhood, Lotan complained he was feeling a bit sore. “Oh my God,” I screamed again. “It’s black and blue!”

Lotan’s willy was bruised from the tip to the b-bag. It looked like two plumbs and a swollen banana, and any kind of arousal was causing him a lot of pain. “Please don’t do anything sexy, babes,” he begged. “I don’t think I could take it.”

“Like this, you mean,” I teased, leaning forward and unbuttoning my shirt slowly. “Oh Christ,” he said grimacing and ran into the bathroom. It turned out that while our love is unbreakable, his willy certainly isn’t.

Lotan was forced to take a week off work and spent it limping around the house in the nude. I was sorry I’d broke his willy, but I did get to watch him wandering around the house in his birthday suit for a week – and it got me out of washing his sweaty strip-show undies too, so I wasn’t complaining. It’s crazy to think that Lotan’s willy is now worth more than everything I own: my whole wardrobe, all my shoes, make-up and jewellery.

I’m a real girly girl so I have loads of clothes and a huge designer shoe collection. He’s even worth more than my car and my family home… put together. The whole DreamBoys troupe is now insured for a staggering £96m between them, making them worth as much as some top footballers.

The serious side of it is that accidents do happen. We have to be very careful because we have such a passionate relationship – some people would say we’ve re-written the Karma- Sutra. But we have to have a strict ‘safety first’ policy.

There are certain positions that are just too dangerous, and too expensive for us to enjoy anymore. Most of the time, I let him be in control – if it was the other way around, I might get too excited and break something again.

Occasionally, I have to remind him who’s boss, in case he gets any ideas. There are a lot of girls out there ogling him every weekend and I want him to know that he’s got everything he needs right here. Which is why I thought it was hilarious when he bought himself a willy pump.

“What’s this for?” I said waving the big pink pump in the air. “You’ve got nothing to worry about down there, babes.”

“I just thought it might be good to use before a show, you know, to get me pumped up…”

But the only thing it ever pumped up was his landlady’s cheeks when she had to let Lotan in after he’d locked himself out. As she opened the door to let him in, the bright pink pump was just lying there on the hall floor. Mortified I rushed passed her and kicked it under the stairs, spinning on my heels to say thank you before slamming the door in her face.

“Lotan!” I screamed, horrified. “You can’t leave things like this lying around!”

“She’s probably got no idea what it was,” he laughed, brushing it off.

I guess he was right. The look on her face told me it certainly wasn’t something her fella kept on his dressing table. But it’s all just another part of going out with a stripper.

Along with the fights over the bathroom, I have to share my self-tan, my nail clippers, and my moisturiser. I can’t even keep my bath bombs to myself. He tans, shaves, plucks, grooms, clips, moisturises and everything else you can imagine. You might think he’s vain, but it’s his job. If you were worth £12m, wouldn’t you take care of your assets?

“Having a £12m willy makes me feel like the daddy. It’s one of the perks of the job. And after the ‘accident’ with Tanya – I’m really glad I have it.

“Imagine your arm was a willy. Tense it, and then try and bend it. Impossible, right? Well, my willy snapped just like that – I was in agony.

“I remember recoiling in pain and then lifting her whole body off me. Obviously we carried on, so job’s a good un, but my god did it hurt. After that I was walking around in the buff – I couldn’t get my hot pants on so I couldn’t work.

“Tanya was teasing me, which was hell, but I saw the funny side.

“On a serious note, having your willy insured for so much money is really important. The DreamBoys often get groped and mobbed by hysterical women – and we need protection. Our manhoods are our livelihoods too, and if they get damaged, our bank accounts take the brunt of it.

“I won’t strip forever, but for now, I’m having fun and making good money, so I’ll keep doing it for a while.”

If you have an eyebrow raising relationship story, we’d love to hear about it!  We’ll secure you the largest fee possible to share your story with a magazine or newspaper.  We work with every major publication and television network.

To read more about how to sell a story to the national newspapers and magazines, see our SELL MY STORY page.