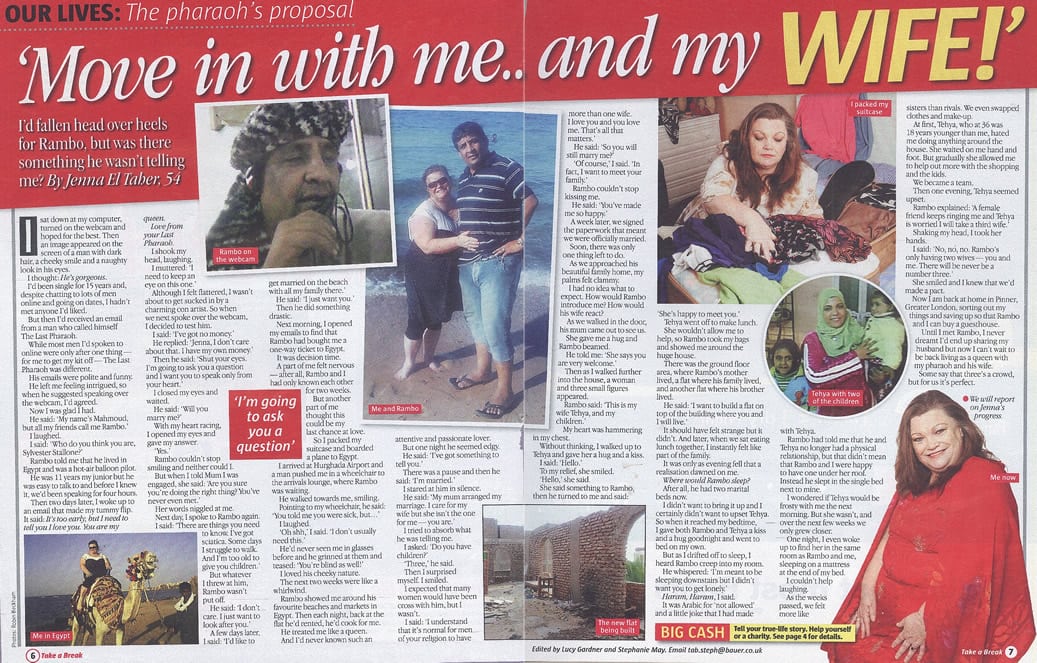 ONLINE DATING can be a minefield for any woman looking for romance.

Tantalising replies from handsome young foreign men flood into inboxes with offers of sun, sex and love. For those that respond, a bruised ego or an empty bank account is the usual consequence.

But when Jenna El Taher, 54, found out her online Egyptian lover Rambo was already married, she ignored all her friends who told her to dump the two-timer and move on.

Instead, she married him – and even made friends with his wife.

“Some say three’s a crowd, but for us, the more the merrier,” says Jenna. 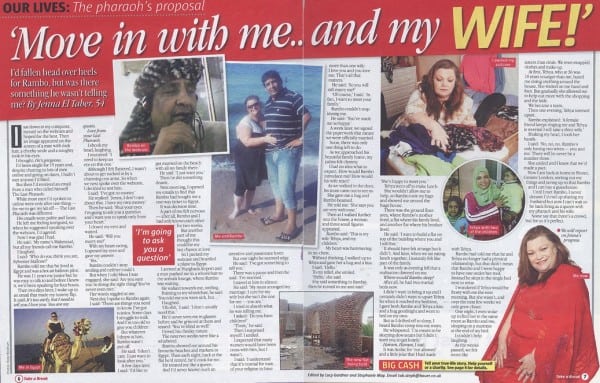 Some say three is a crowd

“When I first met Rambo (Corr) in April 2012 I was single, and with three failed marriages under my belt, had given up all hope of ever finding love again.

“But Rambo stirred something in me I thought I would never feel again. He called himself the Last Pharaoh and as soon as we got talking I knew there was something different about him.

“I might be wife number two, but I’m still his number one.”

The couple met on a dating site and, within two days of chatting, had confessed their love for one another.

“When he told me he loved me, I remember thinking, ‘I’m going to have keep my eye on this one,’ says Jenna.

Not wanting to get sucked in by a charming con-artist, she decided to come clean before things went any further.

“I told him I had no money and couldn’t have children. I told him about my sciatica too and that some days I struggled to walk,” says Jenna.

“But whatever I threw at him, Rambo wasn’t put off. He said, ‘I don’t care. I just want to look after you.’

“He didn’t even have a desire to come to England, like so many would-be toy-boys.

“He genuinely wanted me to be part of his life.”

Rambo, 42, a wealthy businessman and hot-air balloon pilot from Egypt, proposed a few days later over the webcam.

Jenna says: “He told me to close my eyes and answer from the heart. Then he asked me to marry him.

“Instinctively, before I knew what was happening I had said ‘yes’.”

Within a few days of being engaged Rambo had bought Jenna a one-way ticket to Egypt.

Although Jenna’s mother had given her the age-old ‘only fools rush in…’ advice, and it had been less than three weeks since they had first ‘met’, Jenna had packed her bags.

The course of true love however, never does run smooth as Jenna soon found out after touching down at Hurghada Airport, Egypt.

“Rambo was tall, dark and so handsome. Exactly as I dreamed he would be,” says Jenna.

“But after arriving in a wheelchair and with my glasses on I doubt I was exactly what he had been dreaming of.

“Nevertheless he was so passionate and attentive and accepted and loved me for who I am. He showed me around his favourite beaches and markets, he’d cook for me and treated me like a queen.

“However, when I realised I wasn’t the only queen in his life, I couldn’t quite believe it.

“He sat me down and confessed that he had another wife. But to be honest, what shocked me more was that I was understanding about what he had just told me.”

Rambo admitted to Jenna that he had another wife through an arranged marriage and that he had three children with her.

“Most women would have run for the door, jumped on the next plane home, but I couldn’t be cross with him.

“It’s normal for men of his religion to have more than one wife. How could I expect this relationship to be any different?”

When Rambo asked if Jenna still wanted to marry him, he got more than he bargained for.

“I told him of course I still wanted to marry him. In fact, I wanted to meet his family.”

Jenna and Rambo were married less than a week later in a brief ceremony surrounded by friends.

The newly-weds then went to Rambo’s family home to meet his other wife.

“When we arrived his mother came out to greet us and gave me a huge hug,” says Jenna.

“She said something to Rambo, then he turned to me and said, ‘She’s happy to meet you’.

“It was such a relief.

“None of it seemed strange to me. Obviously it was something I’d never experienced before, but they made us feel so welcome, it all just felt completely natural.

“Tehya went off to make food and Rambo showed me the rest of the house.”

The house was separated into flats where his mother, brother and wife lived.

Rambo said that he wanted to build a flat on the roof where he and Jenna would live.

Only when the evening approached did Jenna begin to question the situation she found herself in and the huge change in cultures she had accepted so glibly.

The question of where a woman’s husband will sleep is rarely questioned, but when that husband shares his home with two wives, it’s another matter.

“Before Rambo had the chance to decide, I made my excuses and went to bed alone,” says Jenna.

“It was the right thing to. I didn’t feel right sharing my bed with him and upsetting Tehya.

“It was her house, after all.”

But before Jenna drifted off to sleep Rambo came creeping into her room.

Jenna says: “‘I’m meant to be sleeping downstairs but I didn’t want you to get lonely’, he said.

“I screamed ‘Haram, Haram’ at him jokingly, which is Arabic for ‘not allowed’.

“He told me that he no longer had a physical relationship with Tehya.

“Fair enough, I thought, but I didn’t want to disrespect her by having one with him.”

The couple slept in separate beds and while their relationship blossomed, so did Jenna’s with her newly-adopted family.

Over the next few weeks, Jenna and Tehya became close and even laughed and joked together.

Tehya couldn’t speak very much English and Jenna knew little Arabic, but the couple often swapped make-up and clothes and chatted like sisters.

Tehya even began to let Jenna help out around the house, do the shopping and pick up the kids from school.

“And when the subject of a third wife for Rambo came up, we joined forces to nip it in the bud.

“Tehya was getting upset after a female friend kept calling Rambo, so I took her hands and told her: ‘Rambo’s only having two wives: you and me.”

Jenna has now moved back to London to continue working in order to save up to buy a guesthouse in Egypt.

But she insists she will live happily ever after with her new husband – and his other wife.