How do I sell my diet photos to a magazine or newspaper?

SellUsYourStory.com is part of the UK’s largest independent press agency.  Every year we help hundreds of people cash in on their inspirational real life stories.  If you’re wondering ‘how do I sell my diet photos to a magazine?’, you’re in the right place. Simply fill out the form on this page to let us know about your story and we’ll tell you what it’s worth.  There’s no obligation and our service is free.

Contact our friendly team today. You’ve achieved something amazing so share it with the world to inspire others.

Recent diet story from one of our amazing clients…

The queue for the signing snaked around the shopping centre for as far as we could see. ‘This is going to take a few hours,’ I said to my daughter, Taylor, six.

She looked up and me with a reassuring look and said: ‘Don’t worry, Mummy. Peter Andre will wait for us.’ I grinned. She was such a level-headed girl, and the love of my life. Followed closely by Peter Andre, of course.

I’d followed him my entire life. From those abs In the Mysterious Girl video, to his flirting with Katy Price on I’m A Celebrity Get Me Out Of Here, to his reality show and celebrity dad persona.

After about four hours of queueing, we finally caught a glimpse of him, looking gorgeous in a white t-shirt with a casual suit jacket and jeans.

I held the CD I’d bought, shakily in my hand, and my baby daughter Kacy in my other arm. As I approached him my heart beat faster and faster. I grinned nervously as he waved me over to the desk. Taylor gripped my hand like a vice. But it was over as quickly as it began. I barely said hello, and he’d stood up, a flash had gone off and he’d thrust the signed CD back into my hand and we were ushered away.

‘Mummy, we didn’t even say hello,’ Taylor said, looking up at me with tears welling in her eyes. ‘Come on,’ I said, and after buying another CD, we marched to the back of queue. The second time around I said hello, and he shook my hand. He even said hello to Taylor and gave Kacy a coochie coo. We left feeling on top of the world. But later that night, after I’d put Kacy to bed, and Taylor and I collapsed onto the sofa, Taylor wanted to look at the photo again. 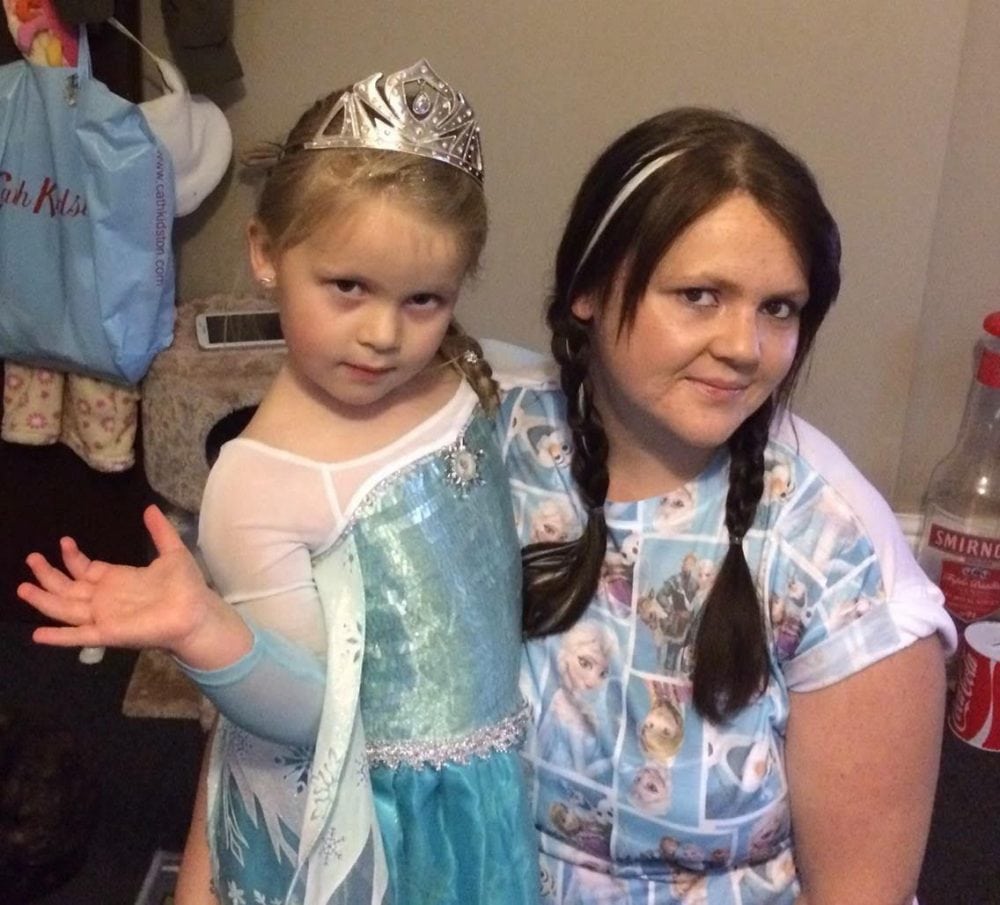 I hadn’t really looked at it myself, but now as I stared at my huge frame I was mortified. I looked like such a frumpy mum. And standing next to the chiseled good looks of heart-throb Peter Andre, I stood out more like a massive mama than a Mysterious Girl.

‘Oh my God! I’m so sorry, Taylor,’ I cried. ‘I look so fat. You must have been so embarrassed.’ Taylor patted my knee. ‘Don’t worry mummy. You are fat, but you’re beautiful.’

If I was hoping for some kind of white lie to save my blushes from Taylor I was asking the wrong person. The truth hurt – and when it comes from your very own daughter it hurts twofold.

Taylor wanted to get the picture framed and put on the wall, but I couldn’t bring myself to have to look at it every day. ‘I’ll get you a better one,’ I promised, hoping Perter Andre would do another CD signing soon. 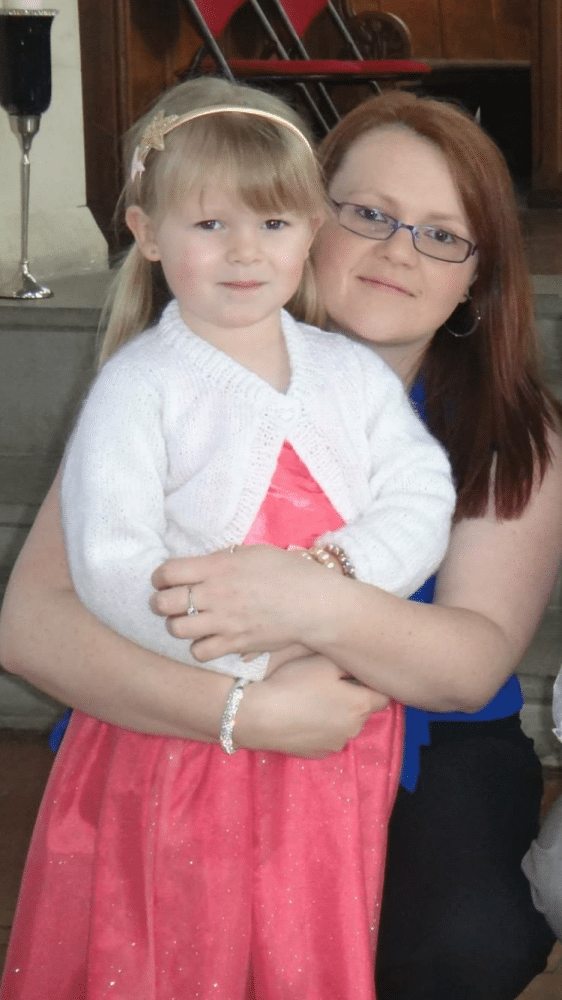 I hadn’t even realised how big I’d got. Most of the women in my family were overweight and subconsciously I’d always feared putting on weight. But in that photo I must have weighed nearly 14 stone.

How had I let myself get so big? I thought. But I knew why. The last few years had been tough.

When I was seven months pregnant with Taylor I contracted swine flu and almost died. I remember asking the doctors if I was going to die, but all they said was, ‘you’re baby’s going to be fine’. 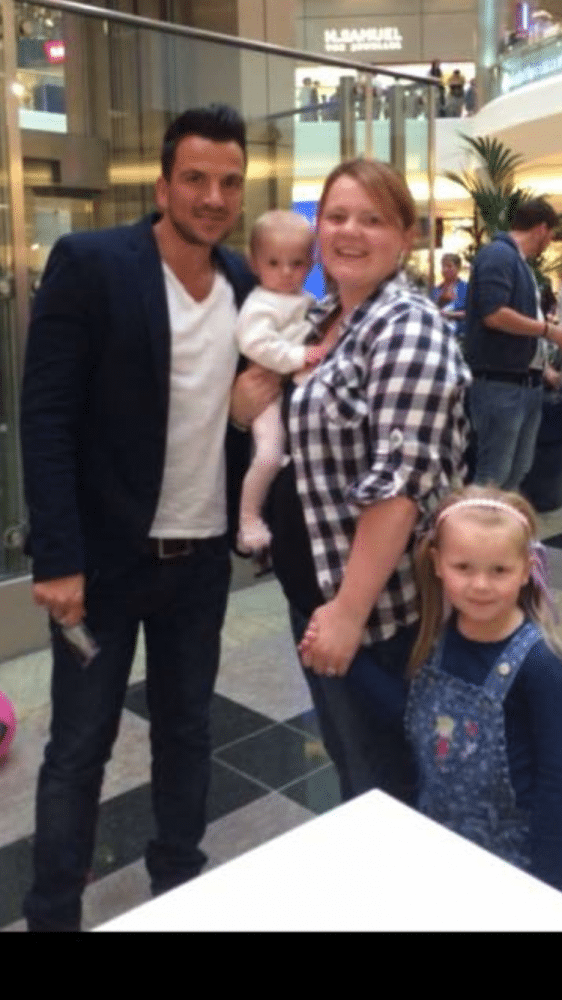 At one point it was looking so bleak that I had the last rites read to me by a priest. By some miracle I pulled through, but afterward I fell into a deep depression. Food became my only vice and I comfort ate the pain away.

I had Taylor but Taylor’s father had walked out on us and I’d lost my job. I decided to move to the Republic of Ireland to be close to my mum.

Soon after arriving, I fell pregnant again. And again, the father walked out, not wanting anything to do with us. With no money, no partner and no job and at eight-and-a-half-months pregnant, I came back to the UK hoping for a new start. But once I arrived, I couldn’t claim benefits because they said by leaving the Republic of Ireland I had voluntarily made myself homeless and so they couldn’t help me.

We found ourselves in a B&B living hand-to-mouth off food banks and donations. 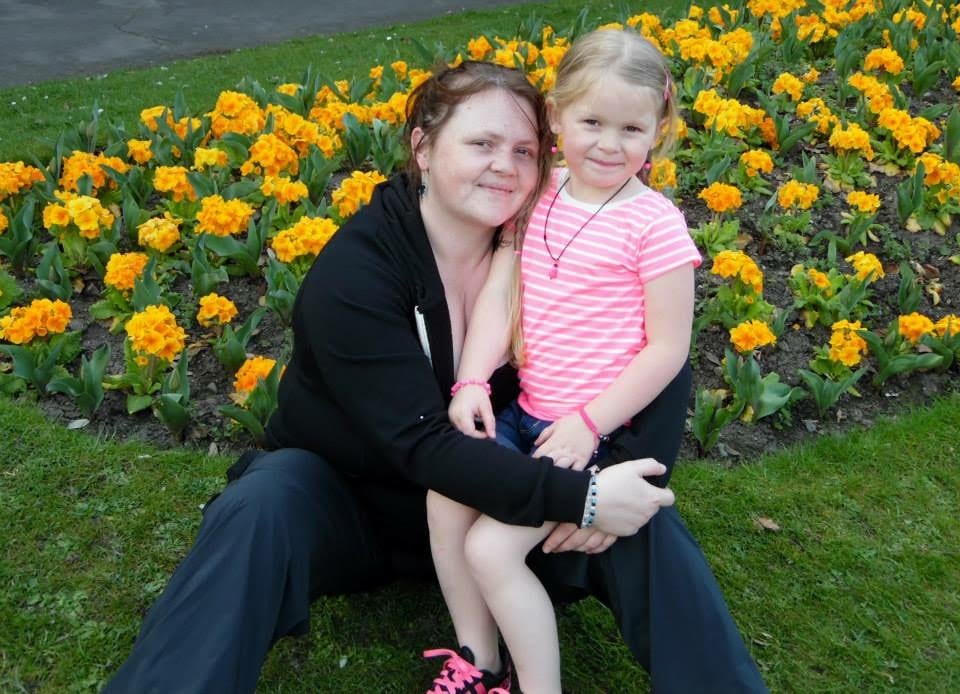 We ate cheap, unhealthy food. Whatever we were given. We couldn’t afford to be fussy.

The problem was, I binge ate. I’d make sure the kids had enough healthy food and drink throughout the day, and then in the evenings, after I’d put them to bed, I’d drown my sorrows in whatever junk food was left over.

Tinned food, bags of cheap crisps, pasta and meatballs, sweets, I gobbled the lot. Secretly I knew I was piling on the pounds, but I couldn’t help myself. On top of that, I had the pressures of finding cheap, fun things to do with the kids. That’s when I found out Peter Andre was doing a CD signing. 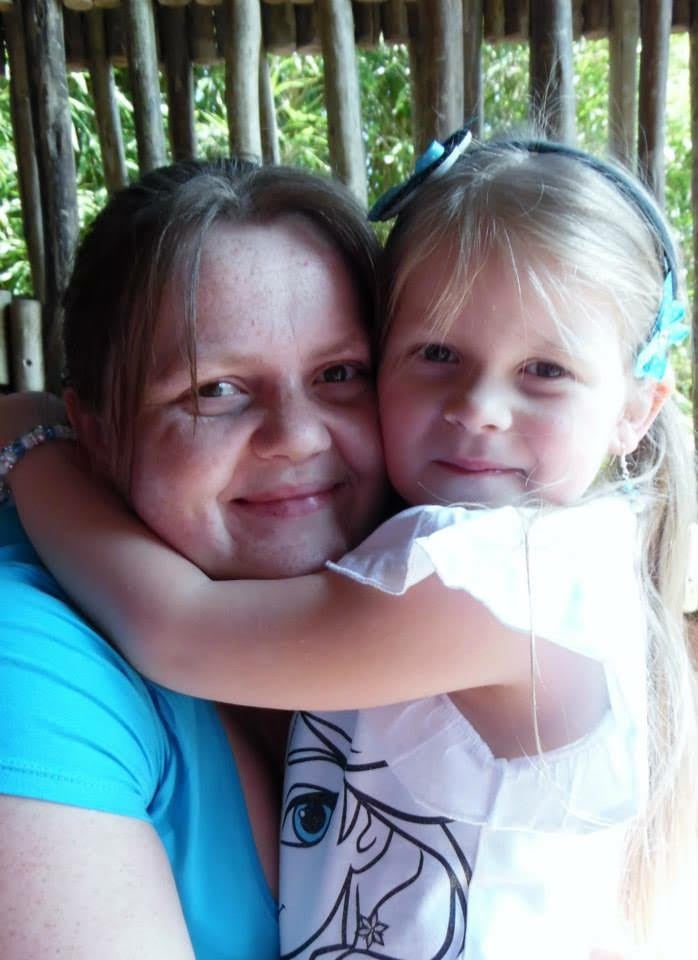 A day out for the price of a CD, I thought. Free memories don’t cost anything. But it cost me a lot more than I was expecting.

Despite promising to Taylor that I’d get her a better picture, I sank even further into depression. Within seven months I’d put on another two stone. I couldn’t bear to look at myself in the mirror, let alone join a slimming group.

I was squeezing into size 22 leggings, and when i could no longer do that I had to wear men’s clothes. But then I saw online that Peter Andre was doing another signing in May this year and I remembered the promise I’d made to Taylor.

Days later I found a local Slimming World consultant and called her explaining my situation. ‘Just come down and say hello – there’s no pressure,’ she said. 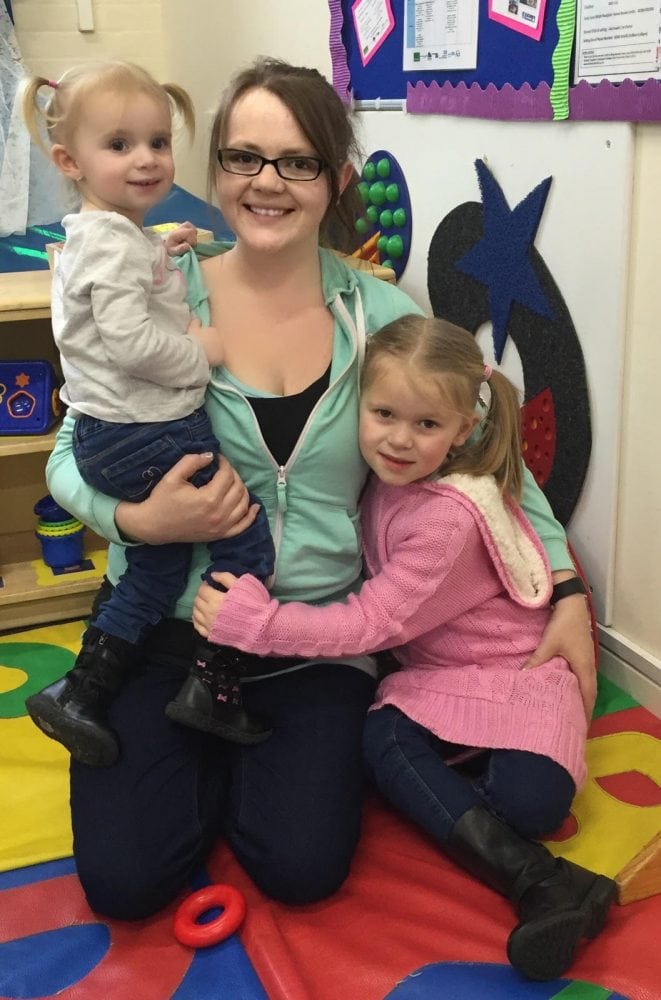 I must have called her ten more times, hanging up each time, before I decided I needed to be brave and face my demons. The day I joined the Slimming World group it changed my life forever. As I stood on the scales, having no idea what I would weigh, my hands shook by my sides.

The reading glared back at me like an empty can of discount beans: 15st 10 lbs. ‘This is the last time you’ll ever see those numbers,’ the consultant told me. 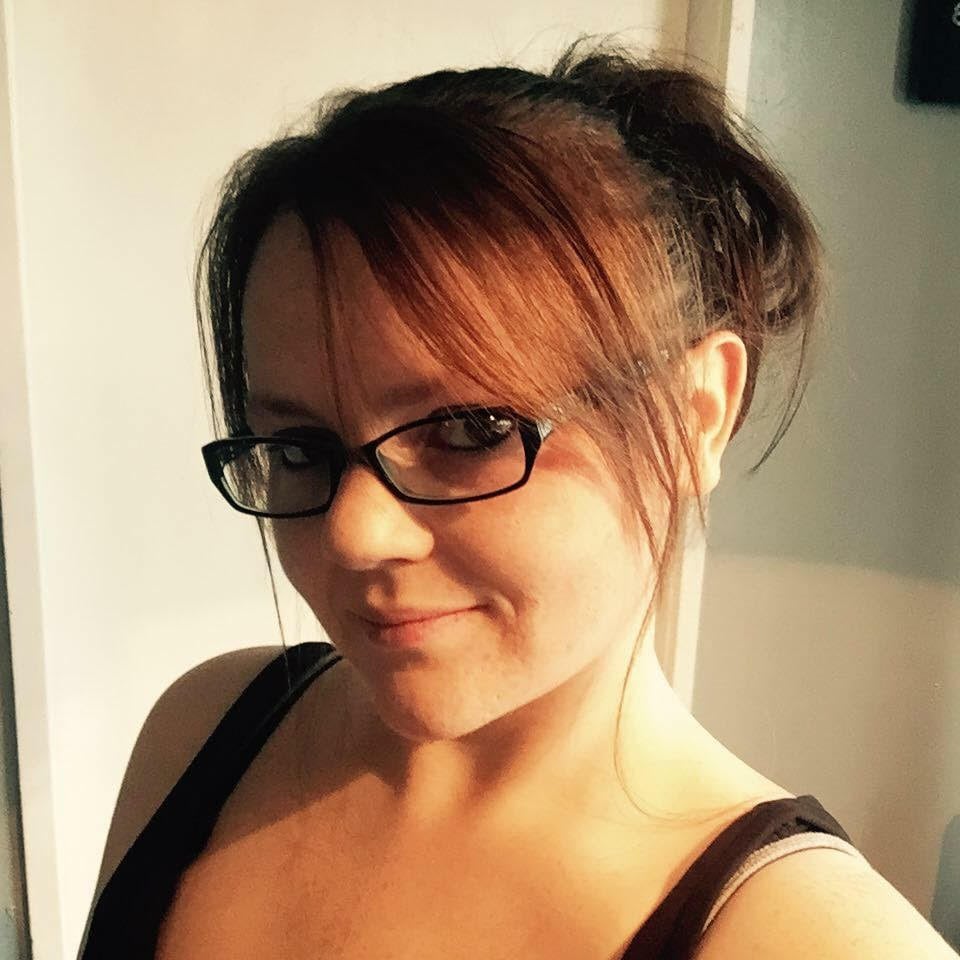 I shed a tear, embarrassed by how much I’d let myself go. But I left feeling like I sunk as low as I could possibly go. There’s only one way to go and that’s up, I thought to myself.

I switched the cheap tins of food and unhealthy choices, and started making better, healthier ones. I started eating what I was cooking for the kids: salads, home-made meals, tons of fruit and frozen veg. I chose a punnet of grapes over a packet of crisps. Carrots for chocolate bars. Yoghurt for ice cream. 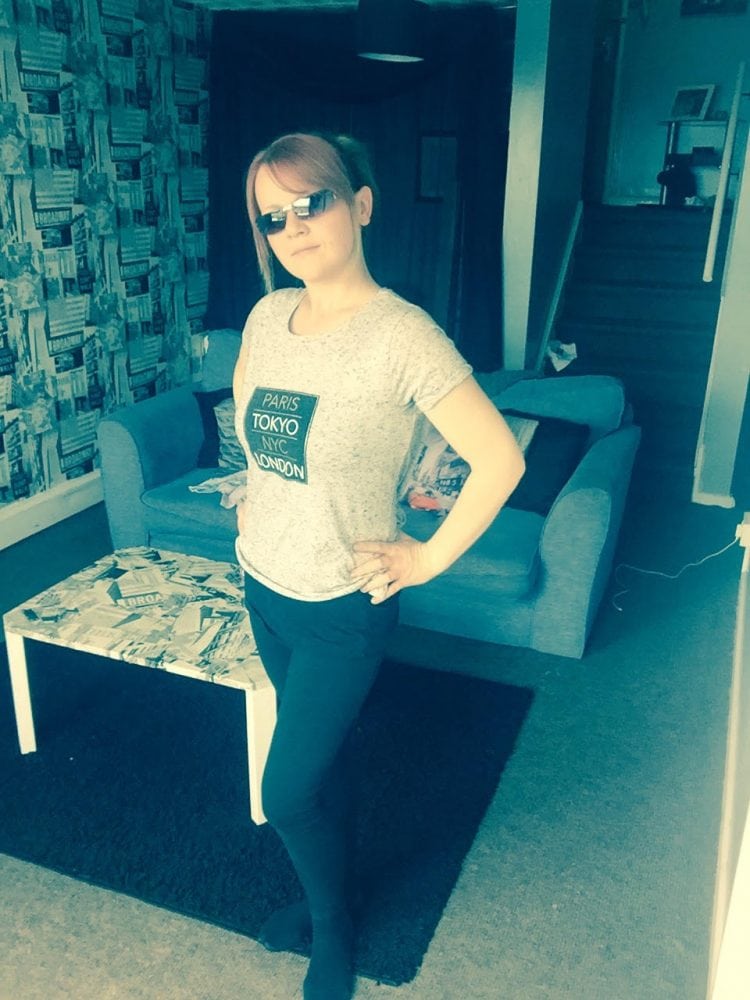 The first week I lost weight,  the second week I lost more weight. The weight kept falling, and my depression got easier to manage. Taylor was my cheer leader. Whenever I was feeling down and didn’t want to go to group, she’d encourage me to go.

One week when I was feeling particularly low – I still hadn’t found a job and money was especially tight – Taylor made me a certificate. ‘Here you go, mummy,’ she said handing me a piece of paper. On it it read, ‘Slimer of the week’.

Holding back the tears of pride, and laughter at the funny typo, I hugged her before standing up and announcing I was going to go to group. And not only did I lose some weight, but I even won Slimer of the week! 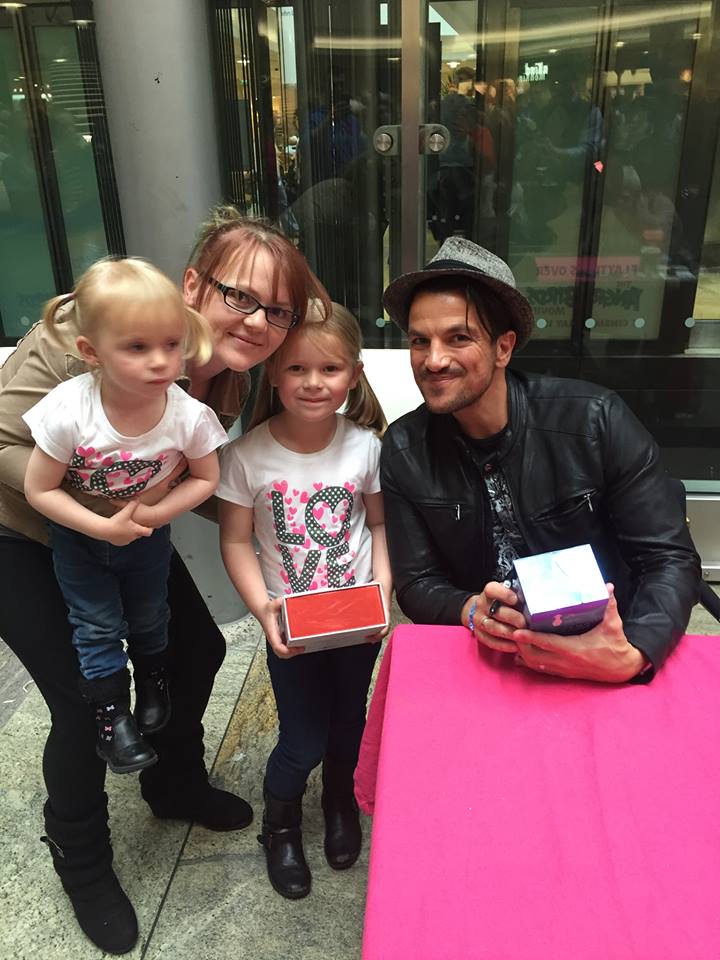 Taylor and Kacy kept me going. In the face of the desperation we were in, still getting our food from food banks and donations, they kept smiling. There was only one week when I didn’t lose anything.

I was so poor that I’d grabbed whatever I could from the food bank, and none of it was healthy. At group that night, one of the women approached me. ‘Look, I know you’re struggling, but you’re doing so well. Don’t give up,’ she said. In her hand she held out a ten pound note.

‘I couldn’t…’ I started to say. ‘You really can,’ she said, thrusting it into my palm.

It was such a wonderful gesture, and I was filled with gratitude. Another lady at group even gave me the basket of fruit she’d won for winning Slimmer Of The Week. And another emptied her fridge of food for us.

Every week I’d drop Taylor off at ballet and then go to group. When I’d pick her up later she’d always ask me how much I’d lost. But she was too young to understand weights and measurements so I’d show her how much I’d lost by weighing her toys.

In the end I’d lost so much I had to start comparing the weight I’d lost to something else she’d understand. When Kacy was three, and Taylor was six, I picked them both up in my arms. ‘I’ve lost both of you in weight!’ I said as they giggled and wriggled in my arms. 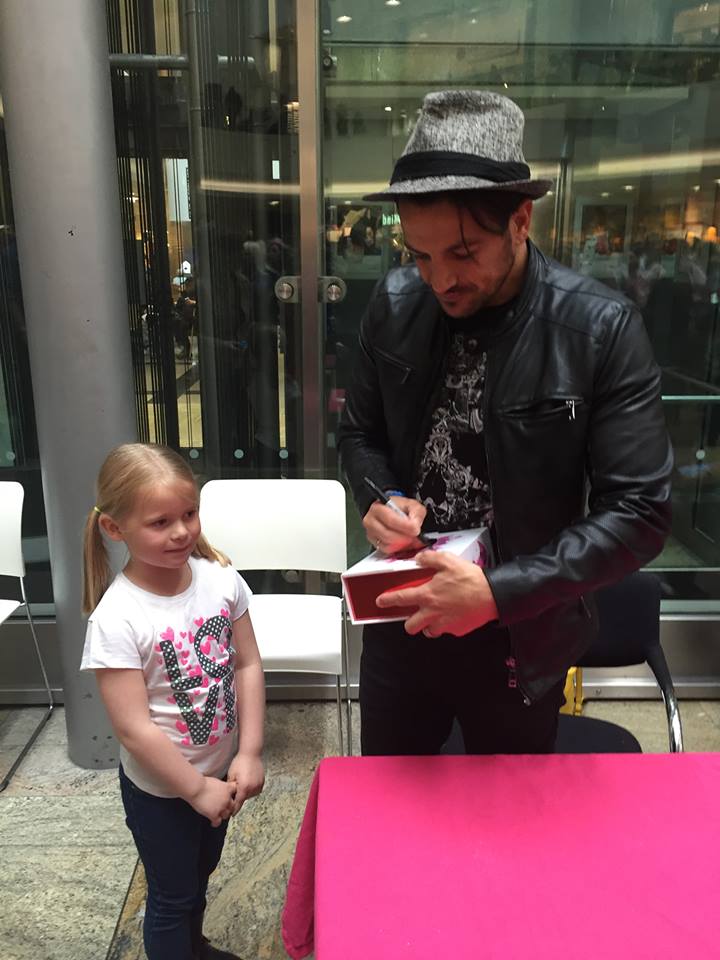 And just in time to see Peter Andre again too. I was even more nervous the second time around as we queued up in Southampton. I was determined to get a better picture for Taylor – one where my belly didn’t fill the whole picture. And one she’d be proud to show her friends.

I tweeted him the picture and told him he wouldn’t recognise me now I’d lost six stone. He didn’t reply. Would he remember me? I thought, hopefully.

‘Slimming World lady,’ Peter yelled when he saw me and Taylor and Kacy in the queue. After fours hours of waiting it was best response I could have hoped for. And I have to admit, I did go a bit weak at the knees. I told him how much I’d lost and he was flabbergasted. 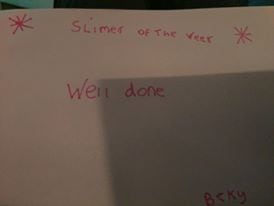 He gave me a massive hug and congratulated me, before whispering in my ear. ‘I’m not going to let you go until you promise not to lose anymore,’ he said. And in a moment I’ll always regret, I promised not to, and he let go. I shouldn’t have promised. I’d still be hugging him now. But we got a lovely picture together, and Taylor shows it to everyone she can saying, ‘that’s my mummy with Peter Andre’.

We’re still struggling with money, and I’m still not working. Occasionally we still have to go to the food bank to get by, and accept donations from friends and family. But I’m determined things will never get as bad as they were and now hoping to become a Slimming World consultant.

How to sell my diet photos to a magazine

I’m ready to sell my diet photos to a magazine!