My Manky Manicure Cost Me My Leg!  Be warned – find out what can happen from an innocuous manicure mistake. I lost my leg! 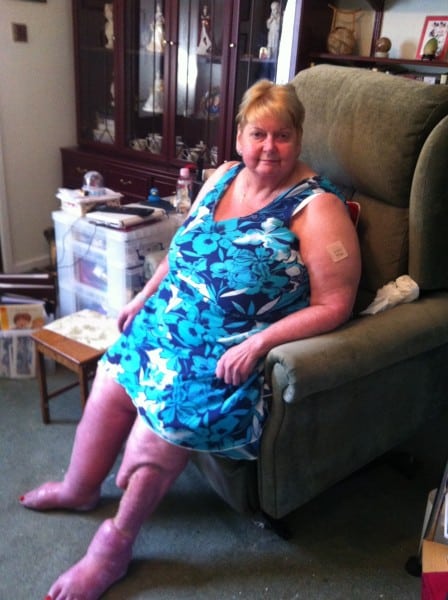 My monthly visit to the beauty salon was a treat I always looked forward to. I’d been having manicures done for over twenty years and I never tired of looking down and seeing my hands decorated in fabulous shades of fuchsia, peach and my favourite, pillar box red.

One afternoon in October 2012, after being pampered at my local salon, I spotted a poster on the wall advertising a new kind of manicure. The Shellac treatment promised long-lasting, no chip varnish. “Well, that sounds ideal!” I said to the lady behind the desk. It’s the hot new trend in nail care.” She told me. “And even better – it’s on special offer at the moment. Once you have Shellac – you never go back!” She chuckled.

I glanced at the shiny, hot pink nails on the poster – they certainly got my attention. A month later I arrived at the salon with a spring in my step for my first Shellac treatment. With this treatment thin coats of polish are applied to your natural nails – with a brief time for curing under a UV lamp between each layer. I sat in the chair and waited eagerly as the warm, bright lights beamed down on my fingers. I couldn’t wait to see what they’d look like, and I wasn’t disappointed. 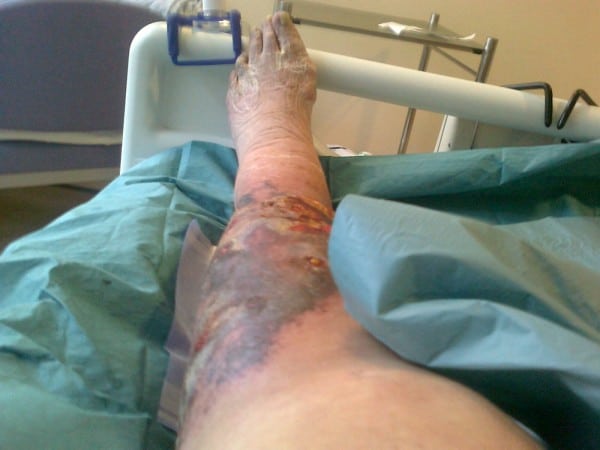 When I pulled my hands out of the UV glare my nails looked glossy, glamorous and best of all they’d be chip-free for weeks. A few weeks before Christmas I found myself back in the salon for my next Shellac treatment. This time I opted for a deep shade of crimson – perfect for the festive season.

I’d been having my nails done for so long now that the appointments always went by so fast I was barely conscious of what was happening. But this was one trip to the salon I would never forget. About three weeks after my manicure I noticed a lump about the size of a ball point pen tip under my nail. Over the next few days I kept my eye on it and watched it turn from pale pink to a deep shade of purple. The puffy bruise became increasingly sore and when the constant jabbing pains started reducing me to tears I knew it was time to see my GP.

He told me it appeared to be a nasty blood blister that had become infected. He asked what I’d been doing lately that could have caused such a cut. I racked my brains but struggled to come up with any explanation. I usually got a few scrapes from gardening but it was the middle of winter and I hadn’t tended to my flowers for a while now. Tapping my fingers together on the desk I tried to think just what it could be – when suddenly it hit me. “I did have my nails manicured last week” I blurted out. My GP looked at me knowingly. He said that was a very likely cause of my blister and he’d even seen a few cases just like it in the past.

Glad to have gotten to the root of the problem I thanked the doctor and walked away with a prescription for some morphine tablets to ease the throbbing. However, it wasn’t long before I found myself back in the waiting room as the pain refused to subside. This time I came away with liquid morphine which I was told to take alongside the pills from my earlier appointment. The combination of the powerful medication made me extremely drowsy and I felt a long way from my usual chipper self.
Continually reminding myself, “It’s just for one month. I’ll be better soon,” was the only thought that kept me strong. However, all of my hopes of a speedy recovery started to diminish when my finger tip started to turn black and I could see that the discolouring was spreading down my finger, towards my hand.
This was getting serious. “Third time lucky,” I thought to myself as I put on my winter coat and headed back to the GP. I whipped my gloves off to reveal my blackened finger and waited for his response. His face turned solemn as he broke the bad news to me.

My finger was infected so badly that there was nothing else for it – the tip would have to be surgically removed. “If we don’t act now Linda you could lose the whole finger,” my GP warned. There was no point arguing – within two weeks I was booked in to have the op. When I was in hospital undergoing the preparations for theatre a nurse went through all the routine questions with me. ‘Have you been ill in the last two weeks, Linda?” she asked from behind her clipboard. I confessed that I’d had an upset tummy in the last week or so that I’d only just started recovering from. The next thing I knew I was meeting with the surgeon – but on the ward not in theatre.

He said that regrettably, due to my illness, my op would have to be postponed. I would have to live with the infection growing in my finger for a little while longer. While I was waiting for news of my next operation I was struck by another disaster. It seemed that bad things really do come in threes. I was taking some washing out of the tumble dryer and slipped on the kitchen tiles – I landed on my left leg with a clatter and I couldn’t get back up from the cold floor.

I called for an ambulance but when the paramedics arrived and told me that nothing was broken I decided to stay at home and recover. But within days I started to deteriorate rapidly. I had an upset tummy, headaches and the familiar agonising throb in my finger was back with a vengeance. My GP sent me to hospital where I was kept on a ward to be monitored for a few days. It seemed there was no end to my bad luck.

Whilst sitting on my hospital bed I felt the most peculiar sensation on my leg. “It feels like water is dripping down my skin,” I told the nurses. It’s like someone has turned a tap on under there,” I said pointing to my bandages. A team of nurses slowly opened up the dressing to reveal that the skin on my leg had started to crack. I’ve always had dry skin but this was something else. I watched as the cracks began to spread and deepen. It felt like I was watching it happen to someone else, I had never seen anything like it.

My skin was just falling apart before my eyes. It was like was viewing a scene from a gory horror film in slow motion but with no pause button to stop it.
After that initial shock the events that followed passed by in a whirlwind I remember being wheeled off to theatre and crying out to the nurses: “Please don’t let them cut off my leg.”
I woke up hours later in an isolation ward. It was too risky for me to be near anyone else, I was too prone to infection. When I had come round the consultants told me that I’d developed a rare form of septecima which had seeped into my bloodstream and poisoned my whole leg. They were convinced that the infection originated from the the blister on my finger caused by the manicure.

There was no other explanation for it – my hands had been left under the UV light for too long. In the end it took a staggering four operations to clear away the infected skin and a further trip to surgery for a skin graft. I was left with just a stump of flesh for a leg – but I knew I was very lucky to have it all. After 12 weeks in hospital I was finally ready to go home – but I had completely lost my independence.
I needed help with everything – I had to be hoisted into bed and had all my furniture moved to downstairs. The strangest thing was having to learn to walk again – I felt like I’d been the victim of a car accident rather than a dodgy manicure. For someone who used to be so bothered about looking my best I’ve been forced to not be so vain. The flesh on my leg won’t ever grow back, so I’m adjusting to life with my new appearance. Whenever I go out I always make sure my legs are always covered with a blanket, it’s not nice for people to see. I’m getting used to it though and I am keeping positive – I refer to my new look leg as my shark bite.
The doctors have said that my looking on the bright side has been the key to my recovery.
I still haven’t been back for a manicure since – I’ll be painting my own nails from now on with a good old fashioned pot and brush.

If you have a medical or health story that you’d like to share with a magazine, get in touch today using the form on the right hand side.  One of our team will get back to you within a few hours to let you know how much your story is worth.  Our story valuation is confidential, free and no obligation.  You can also be confident that our professional staff will treat your story with the utmost respect and sensitivity.  We will ensure that you stay in control of your story.
To read more about selling an injury or accident story to the press, read our Sell My Injury or Accident Story to the Press page.