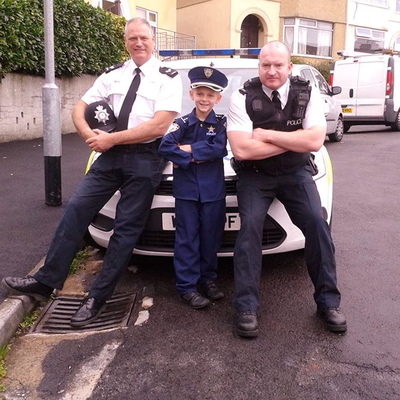 Little Callam told how he wants to be a policeman when he grows up and asked if he could visit a station and “try on some handcuffs pleas (sic)”. To avoid disappointment his proud mum Kerry, 39, warned him that he might not be allowed into the station as he is so young. So the youngster was stunned when two officers knocked on his door with a mobile CCTV van and allowed him to have a look round.

Just when he thought it couldn’t get any better, he was invited to New Bridewell Police Station in Bristol for a guided tour.  The aspiring police officer was picked up from his home and taken to the station in a patrol car with the lights and sirens on.  Once there, he was allowed to try on the riot gear, as well as a pair of handcuffs, and talk to police officers about their day-to-day duties.

Mum Kerry said: “When two officers came to the house it blew him away. “We hoped they would write back to us but we didn’t think he would get the amazing experience he did.

“They had a mobile speed camera van with them and they let Callam get inside. I think in all honesty he would have been happy enough just with that – he really enjoyed it. “They were so impressed with his letter that they invited him to come along to the station and have a look around. “He was so taken back by it. He’s always been very interested in the police. If ever we drive past a car he’ll point it out and he’ll always wave at officers. 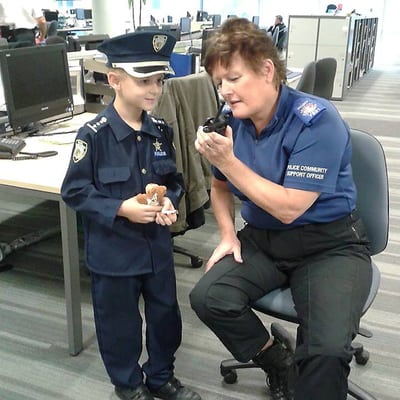 “But he’s always been a shy lad and has never quite been brave enough to go and talk to a police officer.” Callam wrote the letter on September 22, spending an hour hand crafting it, complete with illustrations of a police badge and car. The letter said: “Dear Police man, I am Callam and I am 8 [he got his age wrong] years old. When I grow up I want to be a police man and catch bad people.  “Wood I be allowed to come to yor police sttion to see what a real one looks like and try on some handcuffs pleas.” (sic) To his amazement officers turned up on his doorstep just two days later, with a mobile CCTV unit which they let him look around.

They then offered him a guided tour of their police station, with his mum and sister, Abigail, 11, on Saturday (4/10).  Kerry added: “When he got there he was allowed to see all of their equipment. He was taken to the stock room and he was allowed to try on their riot gear. “He got to try on everything he could, shields, helmets and the handcuffs. “They also talked to him about their day to day duties. It’s amazing how much he took in. He’s still excited about it now.

“In all honesty I don’t think he really had a favourite part, he enjoyed it all so much. He loved every moment.” Little Callam added that the visit had increased his determination to become a police officer one day. He said: “We went to the police station because I done them a letter. Then the police came to my house with a big van. “Then they came again and we got to ride in the police car to the station. Having a ride in the police car was fun. “I got to try the shields and helmets on and also the handcuff and batons. “It was all my favourite. They told me they catch criminals. I want to be a police man and catch criminals too.”

We helped Callam’s family share his special story with Pick Me Up Magazine as an exclusive deal.  Pick Me Up Magazine bid the most for the rights to print Callam’s story on an exclusive basis.  If you have a fun, uplifting or heartwarming story you would like to share with a magazine or newspaper, contact us today.  You can read more about the selling a story to the press here: https://www.sellusyourstory.com/sell-my-story/sell-my-story-to-the-entire-press/ 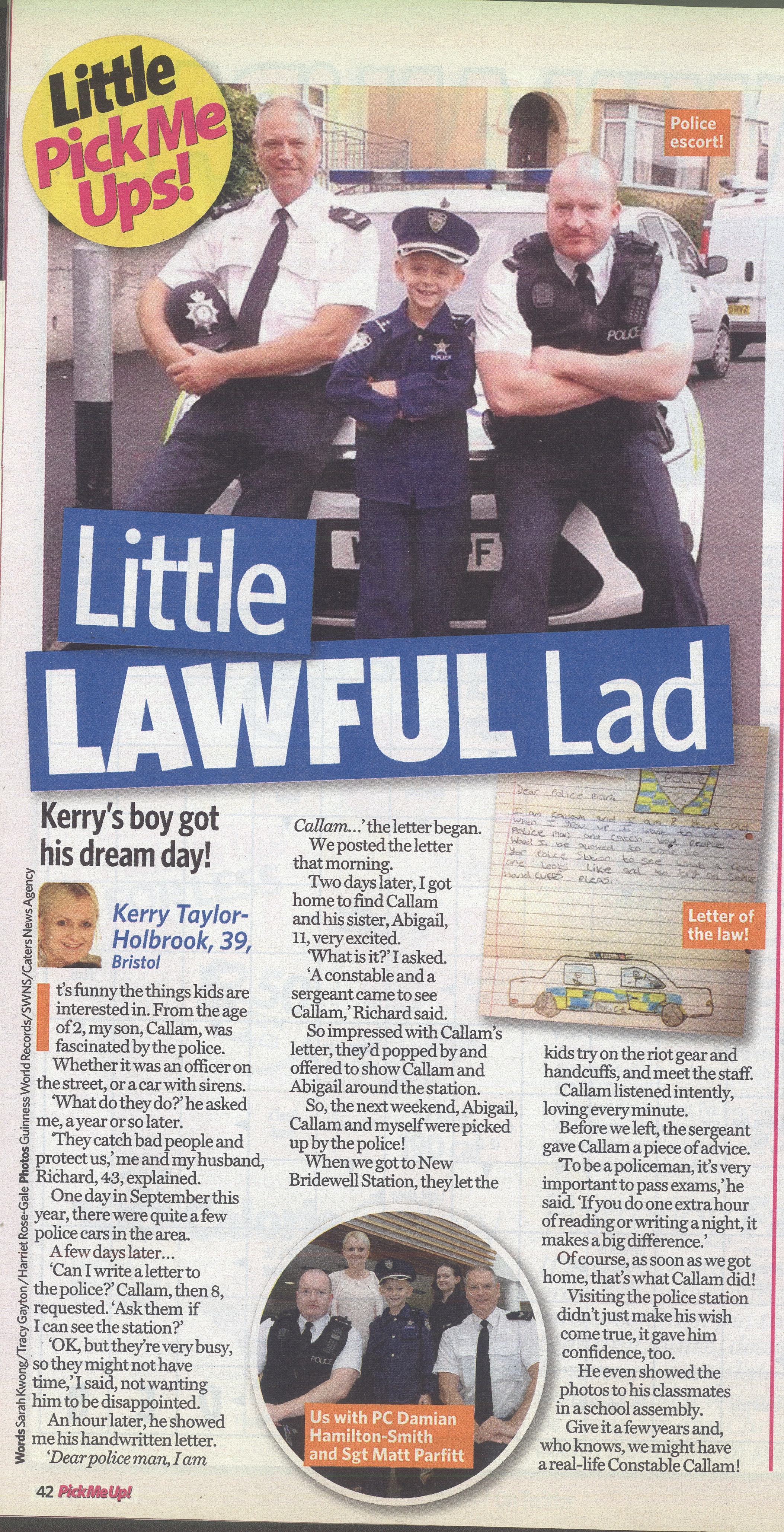