There is nothing more inspirational than reading about an amazing act of kindness from one person to another.  When cycling accident victim Dan heard about fundraising for Brecon’s operation to help him walk, Dan donated all the money he had raised to research his own condition.  Read Dan and Brecon’s amazing story here, and don’t forget – if you know about a similar story, please get in touch and tell us about it.  We’d love to help you raise awareness about and positive news story or amazing acts of kindness. 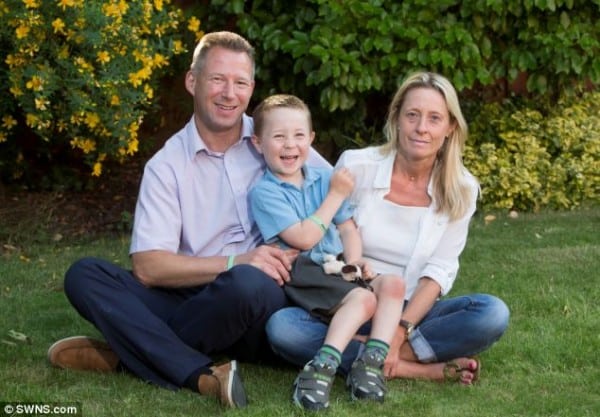 Watching my son, Brecon, five, as he sat at the kitchen table happily scribbling away, my heart swelled with pride. ‘What do you think, mummy?’ he said, holding up his drawing to show me. ‘Very good, well done you!’ I chirped, ruffling his hair. To look at him now, you would have no idea of the tough start Brecon had in life.

Beaming from ear to ear and giggling away to himself, there was no doubt about it, he was one very happy little boy. My partner, Rob Vaughan, 44, and I, had been desperate to start a family and after two years without success we were beginning to think it would never happen. Trying for a baby became part of our routine and every month I would eagerly check to see if our time had come.

‘Let’s not give up. It will happen eventually,’ Rob would say reassuringly, wrapping his arms around me, each time I emerged from the bathroom with tears streaming down my cheeks.

When two blue lines finally appeared on the plastic stick in my hand, I couldn’t believe it. As the news sank in I became a bag of nerves and convinced myself that something would go wrong. But despite my worries, my pregnancy went without a hitch. When I gave birth to baby Brecon via caesarean at the Royal Gwent Hospital in Newport on 24th September, 2007, our little family felt complete.

But soon our bliss turned into a nightmare, when our newborn was checked over and we discovered he had two dislocated hips. At just five days old, the doctor placed him into pelvic harness to help them go back into the right position. ‘He’ll need to wear it constantly for four months,’ he warned us.

With straps looped over his legs pushing them outwards and material across his chest and shoulders, Brecon looked like a little frog. Although we weren’t able to take him home to Mathern, Chepstow, straight away. 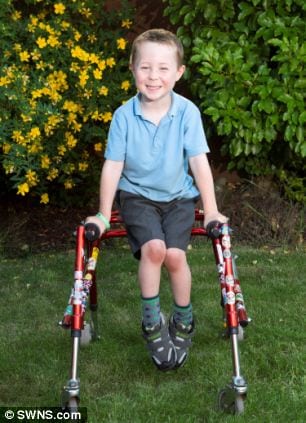 We had to wait until the special car seat we had bought online had arrived, due to the awkward position he was in. When we got back we found that all of the tiny babygros we’d bought wouldn’t fit his shape. But it was all worth it when we returned to hospital and were given the good news that the harness had done the trick.

It had managed to put one of Brecon’s hips back into place, but unfortunately the other just wouldn’t budge. ‘The next step is a closed reduction operation to put it right,’ the consultant told Rob and I. He explained that the surgery would involve physically manipulating the hip joint to get the ball back into the socket while Brecon was asleep under general anesthetic.

As he was wheeled into theatre for the procedure, I anxiously paced up and down the corridors. The first attempt failed, so Brecon had to undergo a second before he had even reached nine months old. Then a third at 13 months. Each time little Brecon was put in a body cast, which covered him from his chest down to his feet.

Because he had been rigid for so long, when the plaster came off he was floppy and all over the place. He had to learn how to crawl again and wasn’t reaching the milestones that other children his age were, but we thought it was just to do with all he had been through. At 20 months he could roll over and was starting to crawl.

I longed to watch him take his first steps, but he just didn’t seem to progress any further. What we didn’t realise was that Brecon’s hip problems were overshadowing something more serious. He was constantly having check ups and when he was two-and-a-half we were called in to speak to a consultant. Perched on the edge of our seats, we knew it wasn’t going to be good news.

‘Brecon has spastic diplegia cerebral palsy,’ he told us. I felt like I had been hit by a ton of brinks. All along I knew something wasn’t quite right, I had my suspicions, but I never imagined it would affect him for the rest of his life. The debilitating nerve-muscle condition meant Brecon would have stiffness in his legs and poor balance and co-ordination. Medics didn’t expect him to be able to walk unaided.

It meant he would never be able to play football with his friends, learn to ride a bike by himself or run and jump in muddy puddles like other little boys his age. It broke my heart. Although it came as a shock, we quickly began to understand Brecon’s needs and we learnt to cope.

As soon as we had got our heads around Brecon’s condition, Rob and I tried to consider what we could do. We adapted the house and garden as he grew older to make it easier for him to get around. 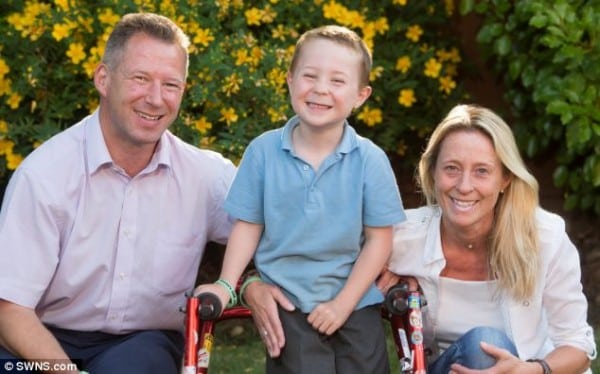 We bought him a walker – a metal frame he could cling to – so he could totter from place to place more independently. It really gave him a new lease of life. When Brecon started nursery the staff couldn’t have been more accommodating and the other children were intrigued by his walker. All our fears melted away as he was always included.

But every day tasks like going to the fridge and pouring himself a drink or going to the toilet weren’t straightforward for Brecon. He would usually require some help and occasionally it would frustrate him. Most of the time he wouldn’t let it get him down, but sometimes it would get on top of him.

‘I can’t keep up with my friends,’ he would groan, after a bad day at school. I would give him a gentle squeeze and after a few minutes he would soon be back to his chirpy self. Brecon never failed to amaze me.

A chance meeting gave us all hope, when we bumped into a family whose son also had cerebral palsy. He had undergone pioneering surgery in America and was learning to walk by himself. Rob and I welled up as we heard about all he had been through. It inspired us to look into treatment for Brecon.

As we browsed the internet we were able to find out more about the selective dorsal rhizotomy procedure that would enable Brecon to walk unaided. Although when we added up costs they totalled £60,000. There was no way we would be able to afford to pay for it ourselves, so we decided to fundraise.

‘It doesn’t matter how long it takes, we’ll get there in the end,’ I said to Rob. We both knew we couldn’t deny Brecon the opportunity to walk – even if it was going to cost an arm and a leg. Quickly our event planning became like a military operation. It took up most of our time and left us exhausted, but we knew it would be worth the effort. Through coffee mornings, fetes and pub quizzes were able to raise £11,000, but we were still a long way off the figure required.

‘I got a message through Facebook,’ Rob said to me, one evening. ‘Someone wants to help Brecon’s cause.’ He told me he had been contacted by Michaela Black, 45, whose son, Dan, 25, was paralysed in a cycling accident four years ago, while on his way to work. Ever since, he had been raising money for pioneering stem cell treatment which could one day help him to walk again.

But after collecting £20,000, he wanted to give it all away to Brecon so he could have the chance to learn to walk instead. Dan selflessly decided to abandon his own dream after hearing about Brecon. He lived just ten minutes away in Llanvair Discoed, Chepstow, and had read about our son’s plight in the local newspaper, but we had never met him.

It took a while for the information to sink in. 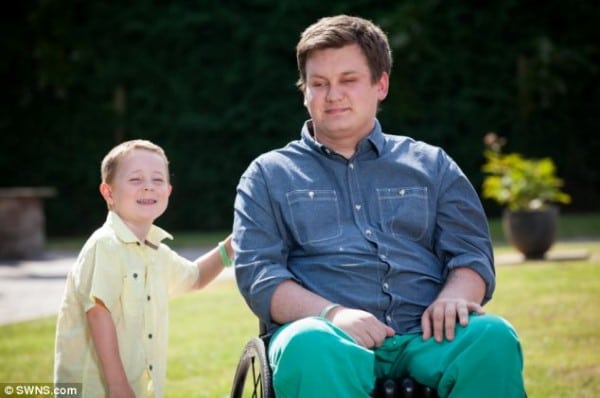 ‘You must be joking,’ I said to Rob, still in shock. ‘That’s a third of our target, it’s a huge amount of money.’

‘He really wants to help,’ Rob said, grinning. It was so touching – a stranger wanting to give Brecon all he could to help him all he could. Dan’s kind gesture received national publicity and soon donations from across the world came flooding in with messages of support. Within a few weeks we hit and even exceeded the £60,000 mark. Suddenly Brecon taking his first independent steps became a reality and it was all thanks to Dan.

We decided that any remaining funds will go towards the Tree of Hope charity to help other families in a similar position. We don’t have a date for Brecon’s operation just yet, but we hope he will have had it by the end of the year.

Dan said: ‘I know for me that things aren’t going to get better any time soon. I just wanted to do something that could help someone whose life could get better. ‘Brecon can definitely walk, if he has the surgery. I wouldn’t wish being paralysed on anyone, so if I can help someone walk, I will. ‘While there is hope for Brecon, I will do everything I can, because I don’t want to see a young boy suffer. I’m incredibly grateful to everyone who has helped me out but this boy needs it more than I do at the moment. It would make me very happy to see the difference made to Brecon’s life.’

If you have a good news story, an amazing act of kindness, or something incredible that should be shared with the world, please let us know by filling out the form on the right hand side of this page and telling us a little bit about your story.  One of our team will get back to you to discuss what your story is likely to fetch in the story auction, or via the news wires, and how we can help you generally.  Read more about the story selling process on the Sell My Story page.

You can also read some of our recent published stories on our True Stories page (where you’ll see stories that have been in the national press recently, written by the features team at SellUsYourStory).