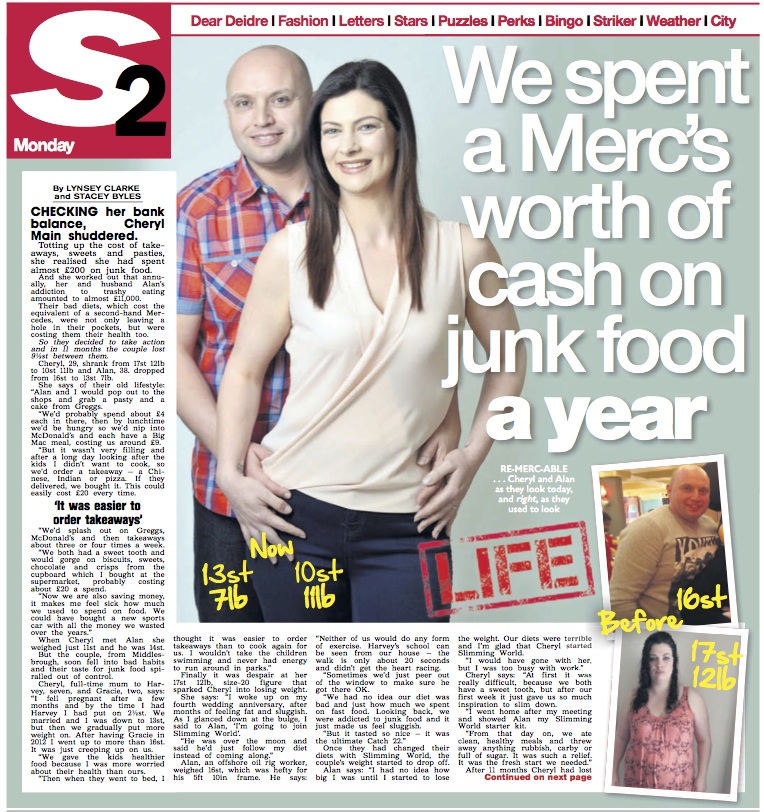 Is junk food cheaper?  Not according to this slimming couple who were alarmed when they worked out how much they spent on convenience food every year.  They decided to save pounds whilst shedding the pounds…

Do you have a weight loss or slimming story to sell to the national press?  SellUsYourStory.com are experts at getting your story published and finding the biggest fee for you.  Our service is free, so what are you waiting for?

Eating healthy is tough, no matter which way you look at it. With so many ready meals in the supermarkets and takeaways on the high street it’s easy to forget you even have a kitchen. And a common excuse from fast-food lovers is that eating healthy is just too expensive, but is junk food cheaper? 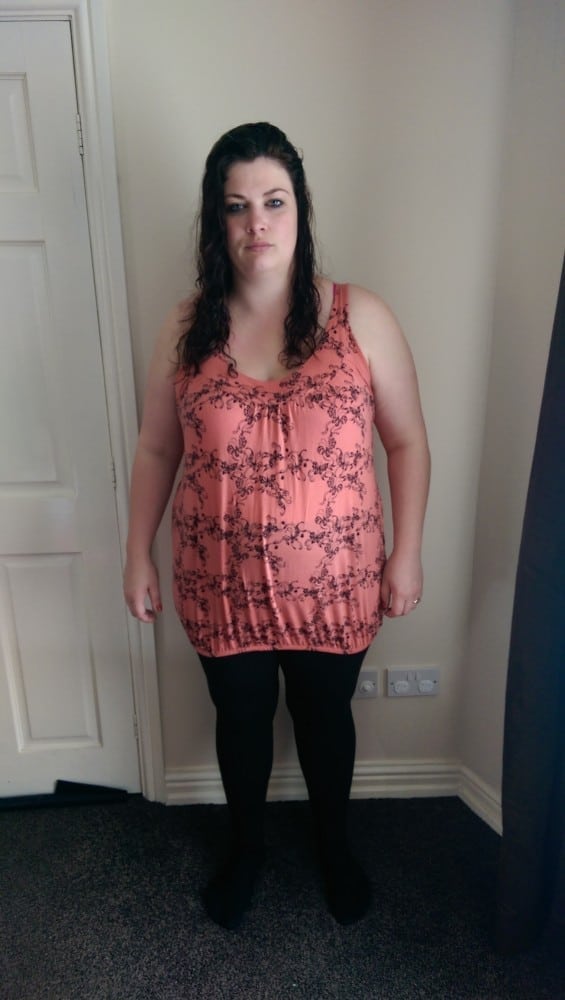 When Cheryl Maine and husband Alan totted up their weekly outgoings, they realised they were spending half the average UK salary… on fast food alone. The couple were forking out £20 each time and eating nearly 4,000 calories every day. The equivalent of £12,000 a year on junk food.

Concerned about always being in the red, Cheryl added up the cost of their nightly takeaways. All the quick McDonald’s dinners, their indulgent Greggs pit stops, and their sweet treats finally shed some light on where their money was going. And it was an eye-opener to say the least. Cheryl, a stay at home mum, quickly realised that the money they were haemorrhaging was ending up on her and her husband’s bellies. 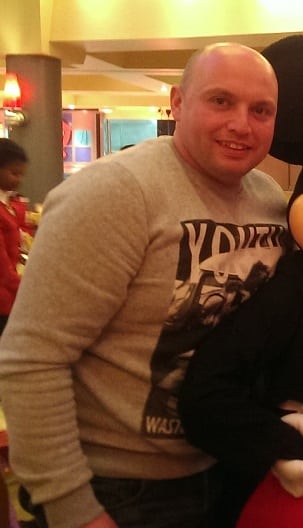 Cheryl, 29, was pushing 18 stone and could only manage to squeeze into a size 20. Her husband, Alan, 38, an off-shore worker, was an unhealthy 16 stone and had a 38 inch waist. But their clothes weren’t the only thing that used to be a little tight. The couple’s money was also an issue, and the fast food addicts had reached a point where they literally couldn’t afford to be unhealthy any longer.

So they decided to swap their greasy takeaways and fatty fries for fresh healthy fruit and home cooked meals. The couple joined Slimming World and lost a whopping nine-and-a-half stone between them. Mum-of-two Cheryl lost an incredible five-and-a-half stone and eight dress sizes, and Alan managed to shrink his waist by six inches and lost three-and-a-half stone.

Cheryl now weighs 10st 11lbs and Alan 13st 7lbs. Cheryl says: Cheryl says: “I woke up on my wedding anniversary, after months of feeling fat and sluggish and meaning to diet – I said to Alan as I glanced down at the bulge, ‘I’m going to join Slimming World,’ he was over the moon and said he’ll just follow my diet instead of coming along. 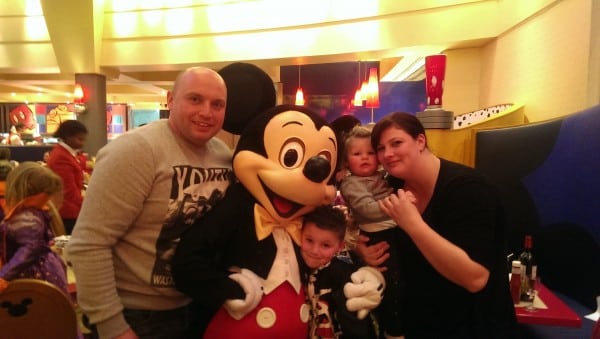 “At first it was really difficult, because we both have such sweet tooth’s, but after our first week it just gave us so much inspiration to slim down. I went home after my meeting and showed Alan my Slimming World starter kit, then, from that day, we ate clean, healthy meals and threw away anything rubbish, carby or full of sugar – it was such a relief, it was the fresh start we needed.”

The pair would spend £9 each on a McDonald’s big mac meal, with a large fizzy drink and sometimes a creamy McFlurry for desert four times a week. For breakfast they would stop off in Greggs, where they would spend about £4 each on fatty baked goods and creamy sugary cakes, four times a week and for tea time, the couple would order a large Chinese take away, pizza, Indian or Thai costing £20 a time, three times a week along with chocolate biscuits, sweets, crisps and ice cream for dessert, costing the pair £20 a time, fixing their sugary habit three times a week. 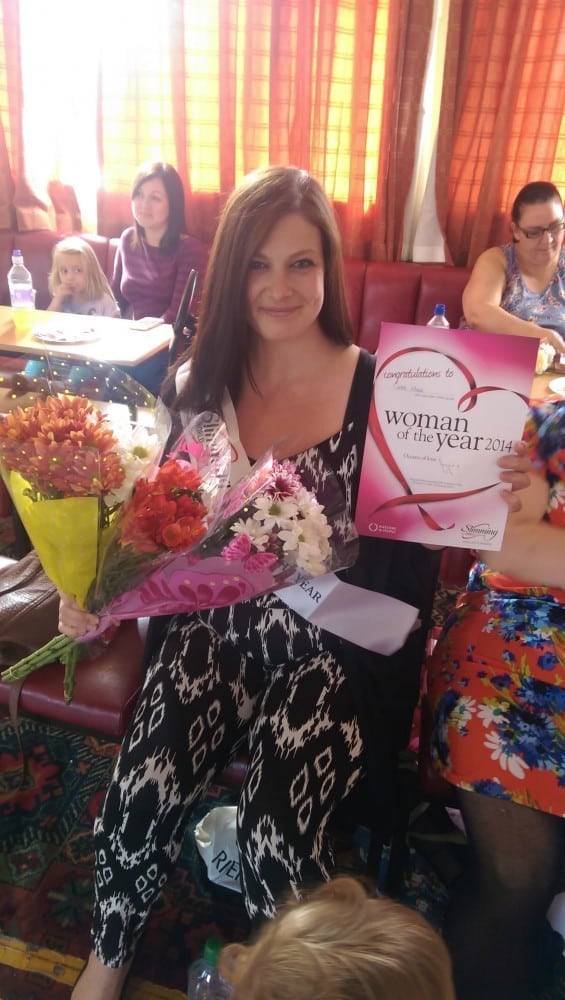 The couple would splurge on take-aways like this on average about three times a week, costing the couple an estimated £224 a week, £970 a month and £11,648 a year on fast foods. Cheryl said: “Alan and I would pop out to the shops and grab a cheeky pasty and a cake from Greggs, we’ll probably spend about £4 each on goods in there, then by lunch time we’ll be hungry so we’ll nip into McDonalds and have a BIG MAC costing around nine quid each. but as you guessed, it wasn’t very filling and after a long day out I didn’t want to cook, so we would order a take-away, anything from a Chinese, Indian, pizza, Italian – if they delivered we bought it, and this could easily cost about £20 every time. 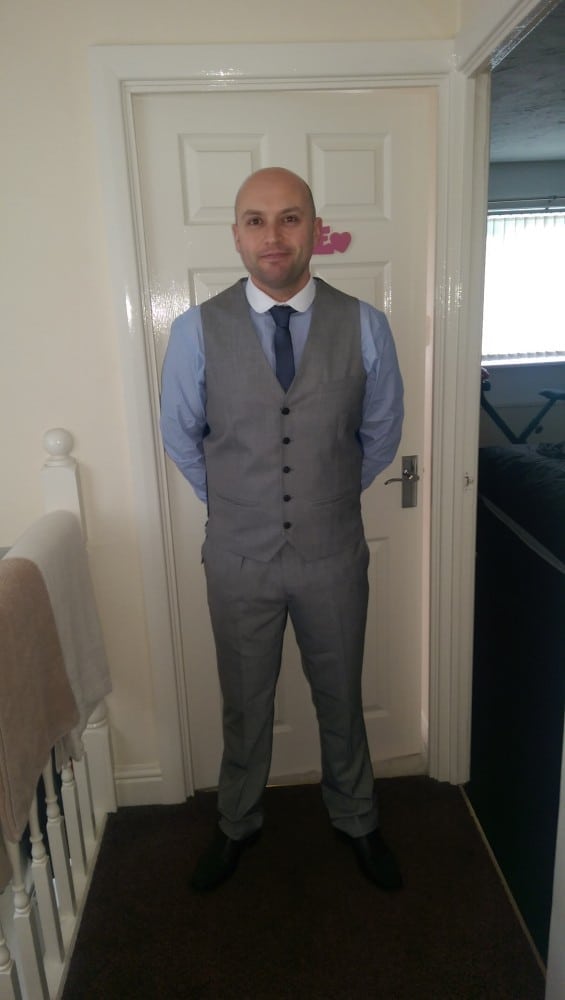 “We would then have a sweet tooth and gorge on biscuits, sweets, chocolate and crisps from the cupboard – which I bought at the supermarket, and this probably cost about £20 a spend. In contrast, their children Harvey, 7, and Gracie, 2, would eat healthy meals compared to their parents. The youngsters would eat chicken, vegetables, fruit, yogurts and healthy cereal bars and wouldn’t be able to leave the table until they have eaten all the greens on their plates.

Harvey is over the moon that his parents can finally keep up with them and play. Alan said: “I’m a pretty big guy, so I guess I have always looked big, but I had no idea how big I was until I started to lose the weight. “Our diets were terrible and I’m glad that Cheryl started Slimming World, I would have went with her, but I’m too busy with work.

“Neither of us would do any form of exercise, Cheryl would never go to the gym or walk, and as Harvey’s school can be seen from our house, the walk to school took about 20 seconds and didn’t get the heart racing. Sometimes we’ll peer out the window, just to make sure he got there okay.

“We had no idea our diet was bad and just how much we spent on fast food, we were addicted to junk food and it just made us feel sluggish, but it tasted so nice – it was the ultimate catch 22.

“But once Cheryl joined Slimming World, that was it, we ate clean, fresh meals and the house now is always full of healthy food and we both love going on long walks together, I can play football with Harvey and Cheryl can push Gracie around in her push chair without getting out of breath.” 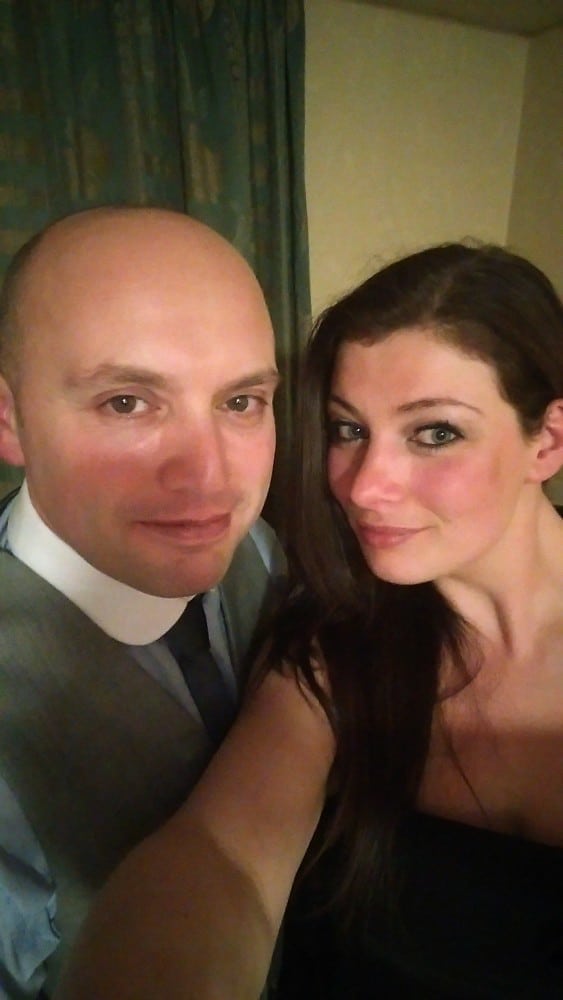 Now the foodie pair have managed to shed the pounds, they have found themselves saving about £30 a week after spending the rest on fresh fruit and vegetables. This saving means the now-healthy couple will be saving just under £1,500 a year and will be putting the money towards something useful, a much needed and well deserved holiday.

Cheryl said: “We’re so much more confident now we’ve managed to the lose the weight, we go out more, we can keep up with the kids and life is better in general and of course were also saving money – it makes me feel sick how much money we used to spend on food, we could have bought a new sports car with all of that money!

“We have never looked back, we have loved every minute of it. It has been amazing, I hate looking at old photos but it reminds me of how far we have both come, it was amazing dieting with Alan, we kept each other on track and when I went to sneak in a chocolate biscuit or a cake, he would stop me and vica versa, sometimes it was really funny catching each other out.

“When we were both larger, Alan and I would just watch the kids as they hopped on rides, we’d be too scared to join them in case we didn’t fit in the seat or if the safety belt didn’t fit around our large tums, but now, we all jump on together now were slimmer.

“I can finally wear short colourful clothes, instead of baggy black tops and leggings and Alan can finally fit into trousers and shirts from trendy shops – it’s great and we’ll defiantly never be bulk buying fast food again and were looking forward to putting our savings towards a good cause.”

Do you have a story you’d like to sell or do you have a great idea for a magazine feature that you could appear in?  We are constantly on the hunt for interesting magazine and newspaper stories, features and articles.

If you have a weight loss story, a slimming feature or a dieting article to sell to the press (or any other story), get in touch today.  There is no obligation, but we’ll tell you how much your story is worth and tell your story exactly how you want it to be told.

Simply fill out the story valuation form on this page and we’ll get straight back to you.  You only need to give us the basic outline of your story at this stage, so just a couple of lines will do.

To find out more about how to sell a story to the press, see our Sell My Story page.

Recent Weight Loss, Dieting and Slimming stories from our clients